It’s a great time to buy an audio source component -- whether you’re into analog or digital, options abound. Of the many alternatives in turntables and phono stages, the hottest action seems to be at higher prices; but while there are many cost-no-object DACs available, the price of high-quality digital seems to keep declining. Twenty or so years ago, when I got into high-end audio, a high-quality CD player or DAC would usually cost thousands, if not tens of thousands of dollars. Nowadays, great digital playback can be had for substantially less than $10,000. Case in point: When I purchased it in 2011, my Meitner Audio MA-1 DAC cost $7000 USD. Even more to the point: My second-line DAC, an Oppo HA-1, purchased earlier this year, offers excellent sound for $1199.

Aiming right at the sweet spot of about two grand is Simaudio. Although their Moon Evolution components are priced far higher, their Moon Neo line is considerably more affordable; an example is the Moon Neo 280D 32-bit digital-to-analog converter ($2200).

Just days after taking delivery of a Moon Neo 280D, I sat down in Simaudio’s room at T.H.E. Show Newport Beach, California, to talk with Lionel Goodfield, Simaudio’s public relations and marketing manager, and enjoy a long session of listening to selections from his extensive collection. Goodfield stated that the main design goal for the Neo 280D was to offer a level of performance and features that exceeded what the competition offered at anywhere near the 280D’s price of $2200, and to provide a listening experience engaging enough to make an emotional connection between music and listener -- all the while providing the levels of engineering and build quality that Simaudio has built its reputation on.

The Moon Neo 280D is a fully asynchronous DAC that supports native DSD64, 128, and 256 signals, as well as PCM signals of bit depths from 16 to 32 and sample rates of 44.1 to 384kHz. It has seven digital inputs: XLR, two coaxial, two TosLink, USB, and Bluetooth aptX. DSD signals, and PCM sample rates of 352.8 and 384kHz, are supported only via USB. An optional eighth input supports Simaudio’s Moon intelligent Network Device (MiND) network-player module ($600). This permits the streaming of music from a NAS device or the Internet (e.g., streaming services such as Tidal) via Wi-Fi or Ethernet, using only a tablet or smartphone, without requiring an attached computer.

The Neo 280D’s analog section is a fully balanced differential circuit claimed to offer increased dynamic range and headroom, higher resolution, and an improved signal/noise ratio. Its frequency response is specified as 2Hz-100kHz, +/-3dB; its THD at 1kHz, 0dBFS, A-weighted, is 0.001%; and its signal/noise ratio is 118dB at full output. The Neo 280D measures 16.9"W x 3.4"H x 13.1"D and weighs a reasonable 16 pounds.

While one should never judge a book by its cover, earlier generations of Simaudio components looked a bit too futuristic and “out there” for my taste. That said, their more recent models are quite handsome. The Neo 280D’s 1/4”-thick faceplate is flanked on both sides by Mark Levinson-style cheeks, and the case is available in all black, all silver, or my favorite: black with silver cheeks.

At the top center of the front panel is a chromed Simaudio logo. (I’m embarrassed to admit that, until recently, I had no idea what the logo represented. Then, while perusing Simaudio’s website, I noticed that the logo is a truncated treble clef leaning far to the right. D’oh!) Just below the logo is an LED that glows blue to indicate power-up, and below that is the Standby button; when pressed, the LED goes dark. 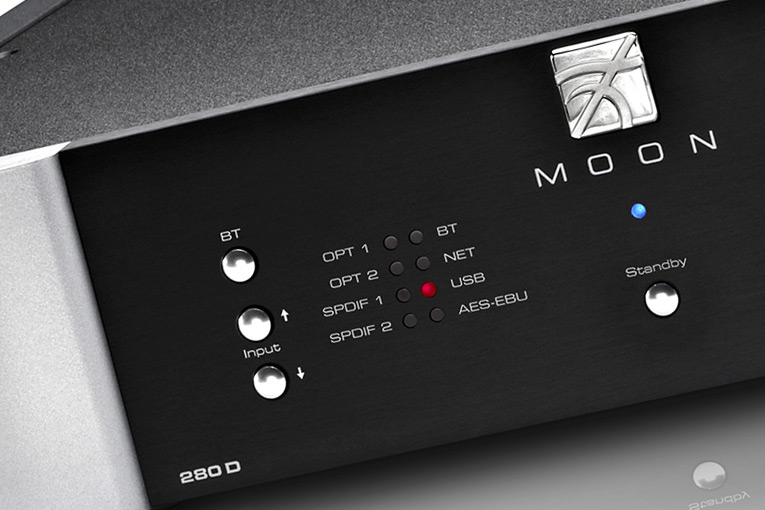 At the faceplate’s far left is a column of three silver buttons: the topmost is labeled BT, for Bluetooth discovery mode; the lower two buttons are for scrolling among the various inputs. To the right of these are two columns of four red LEDs each, one for each input: Opt 1 and 2, S/PDIF 1 and 2, BT, Net, USB, AES-EBU.

At the center top of the rear panel are the Wi-Fi antenna and Ethernet ports. Arrayed along the bottom from left to right are the analog outputs (RCA and XLR) for both channels, followed by the inputs: USB, TosLink 1 and 2, S/PDIF 1 and 2 (RCA), and AES/EBU (XLR). Then comes an RS-232 port, a SimLink input and output for connecting other Simaudio components, an IR input for an aftermarket remote, an IEC inlet, and, finally, the power switch.

The full length of each side panel is grooved, but while these look like heatsinks, they never radiated any heat; apparently, they’re just an attractive cosmetic touch. Supporting the Neo 280D at the corners of its bottom panel are four round metal footers with central inserts of black rubber for isolation, and to protect the surface below. 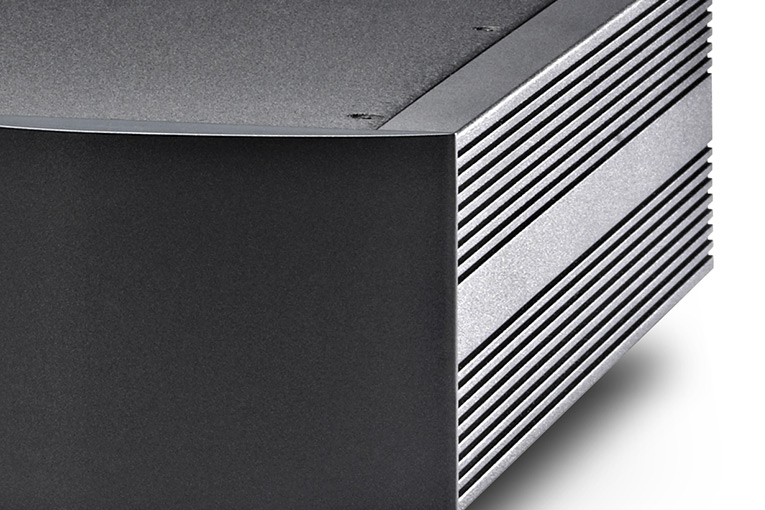 The fit and finish of the Neo 280D were commensurate with its price: excellent.

While the Neo 280D wasn’t as plug’n’play as my Meitner MA-1, setting it up was very easy; I barely had to refer to the owner’s manual.

Lionel Goodfield recommended that I give the Moon Neo 280D at least 160 hours of burn-in before doing any serious listening, so I ran it in for a few weeks, then goosed it along with several runs of the long sweep track from Cardas and Ayre Acoustics’ Irrational, But Efficacious! system-enhancement CD. That done, I settled down for some extended listening. Throughout, I listened to 16-bit/44.1kHz CDs and high-resolution files streamed via USB from my server, and to 16/44.1 files from Tidal streamed from my iPad Mini via Bluetooth. And just for kicks, I even streamed the audio portion of a few Netflix movies via Bluetooth from my MacBook Air.

Straight away, I noticed that, due to differences in output with my usual DACs, more gain was required from my integrated amp. But this was no big deal -- the Neo 280D mated with my system very well, performing flawlessly throughout my listening.

However, even before I’d begun to burn it in, the Moon Neo 280D -- straight out of the box, with no warmup -- sounded clean and grain-free in the top end, with bass that was tactile and supple and had excellent rhythmic drive. These qualities only improved as burn-in continued. In fact, I was so taken with how the Neo 280D reproduced low-end grooves that this quality strongly influenced my first choices of music to play: Little Feat and the Band. Both groups played roots-flavored rock’n’roll, and could boogie at will. The bass lines in the Feats’ “Fat Man in the Bathtub” and “Old Folks’ Boogie,” both from the live album Waiting for Columbus (16-bit/44.1kHz AIFF, Warner Bros.), bounced along with just the right amount of touch and resonance, never sounding blurred or muddy. In “The Genetic Method,” from the Band’s live Rock of Ages (24/192 AIFF, Capitol/HDtracks), Garth Hudson’s electric organ in this long solo track never reaches the earth-shaking depths of a pipe organ, but when he hits the low end, the Neo 280D didn’t fail to exploit his organ’s reedy wheeze.

What also impressed me about the Neo 280D was how well it reproduced the kick drum. With the exception of St. Anger, Metallica does a fine job of recording their music, and on Live Shit: Binge & Purge (16/44.1 AIFF, Elektra) they set, for me, the standard for a live heavy-metal recording. Every single impact (party on, drummer Lars!) in “Wherever I May Roam” I felt right in my chest. I can’t recall having heard a single other DAC that relayed so physically palpable a kick-drum sound. 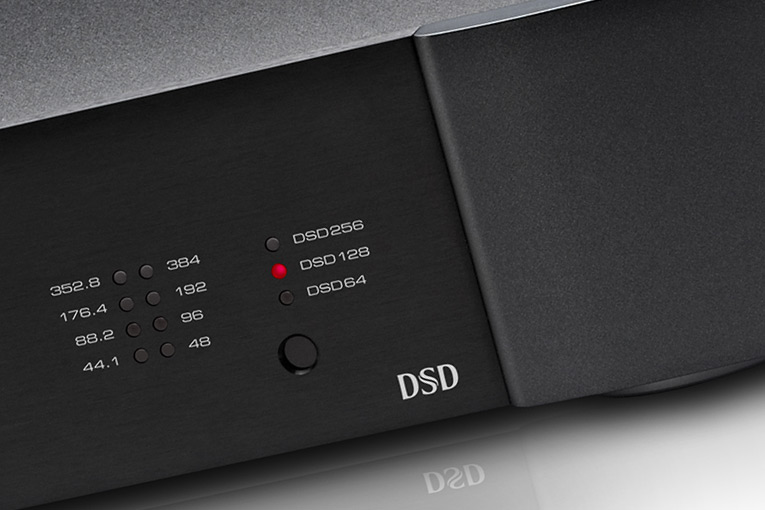 But low-end performance alone won’t sell a product. Fortunately, the Moon Neo 280D’s treble and midrange more than held up that end of the audioband. I particularly noticed this during the intro to the title track of Peter Gabriel’s Shaking the Tree: Sixteen Golden Greats (DSD128, Geffen). Tony Levin’s bass is first accompanied by the ringing sound of a percussion instrument (bells? finger cymbals?), then by a gradually crescendoing organ. The Neo 280D’s clarity and lack of transient smearing allowed this wealth of low-level detail to emerge from the background of the mix, all to enhance the richness of this track.

Though I listened to a lot of rock’n’roll during my time with the Neo 280D, it reproduced very well a wide variety of music. Late in my listening I bought the latest Miles Davis album, At Newport 1955-1975: The Bootleg Series Vol.4 (16/44.1 AIFF, Columbia/Legacy). While I enjoy all four discs, the best for me is disc 2, from 1966. While pianist Herbie Hancock, double bassist Ron Carter, and drummer Tony Williams are somewhat recessed in the mix, Davis and saxophonist Wayne Shorter are front and center. In Davis’s solo in “Stella by Starlight,” the Neo 280D captured the crystalline, bell-like tone of his trumpet and his almost incessant staccato. When Shorter’s tenor sax enters about three-and-a-half minutes in, its warm, generous sound was perfectly reproduced by the Neo 280D.

Since the death of double bassist Charlie Haden last year, I’ve been listening to his live recordings almost weekly. My favorite is disc 4 of The Montreal Tapes, with Gonzalo Rubalcaba on piano and Paul Motian on drums (16/44.1 AIFF, Verve). Not only is the music outstanding, but the recording quality is stellar -- among the best in my library, regardless of resolution. For me, this recording comes as close as possible to being there live in person, which makes it an ideal demo disc. In this regard, the Neo 280D didn’t disappoint, nailing everything I’ve come to expect from this recording: a broad, deep soundstage, a wealth of clarity and transparency, and, above all, musical cohesion. While evaluating the Neo 280D, I listened to this recording more than any other -- probably a dozen times.

Very well indeed. While I might have expected the more expensive DAC to sound better, I was surprised that the differences were exceedingly small. The Neo 280D and the Meitner both excelled at clarity and soundstaging, but I felt that the MA-1 was a tad better in overall clarity, while the Moon Neo’s soundstages were somewhat more broad and deep. Tonally, the Neo 280D sounded warmer and richer than the MA-1, which was more neutral in this regard. Listening to acoustic recordings, I preferred the sound of the Meitner; but with rock’n’roll and fusion, I preferred the Simaudio for its stellar reproduction of bass.

The Moon Neo 280D and Oppo HA-1 are functionally similar in offering both USB and Bluetooth connectivity. However, while the HA-1 includes a headphone amplifier and can serve as a preamplifier, the more expensive Neo 280D dispenses with both. As I mentioned in my review of the HA-1, it comes damn close to sound of my Meitner MA-1. That said, my opinion of the Oppo vs. the Simaudio is largely similar to what I said about the Meitner vs. the Simaudio: The Moon Neo 280D produced stronger bass and wider soundstages.

I really enjoyed my time with the Simaudio Moon Neo 280D. I feel it’s a world-beater at its price, with sound quality that approaches, and in some respects exceeds, those of costlier DACs. Yes, it’s more expensive than the Oppo HA-1, and doesn’t offer a headphone amp or preamp functionality, but that shouldn’t concern you if all you need is an audio DAC. Plus, with the optional MiND module, which eliminates the need for a computer, the Neo 280D’s value increases.

The Moon Neo 280D is a well-rounded DAC that handles all musical genres with finesse, but if your tastes lean more toward rock’n’roll and fusion, the Neo 280D may very well be the DAC for you. My default recommendation in this price range has been the Oppo HA-1, but the Neo 280D should be right up there for those looking for other options in that price range or higher. As for that market sweet spot that Simaudio is aiming for? I’d say the Moon Neo 280D is right on target.