The Best of Montreal Audiofest 2022

That’s what I wanted to say after Montreal Audiofest 2022 wrapped up on March 27. From what I could glean while covering the show for our SoundStage! Global site, the three-day hi-fi show had about 60% of the exhibitors it had had in 2019—the last show before the pandemic shut it down. That drop in exhibitors didn’t surprise me because no one expected that manufacturers, distributors, and retailers would be clamoring to display at hi-fi shows. Many of them have had great sales over the last two years without trade shows. Yes, the pandemic lockdowns were, on the whole, beneficial to hi-fi.

What did surprise me, however, was that public attendance at Montreal seemed to be about the same as it was in 2019. I figured that many people would still be reluctant to gather in big crowds after being hunkered down for so long. But the real surprise was the enthusiasm of the exhibitors and attendees—it was higher than I’d seen in years. Furthermore, that energy was present despite everyone having to wear masks, which everyone did without complaint—yet another surprise. 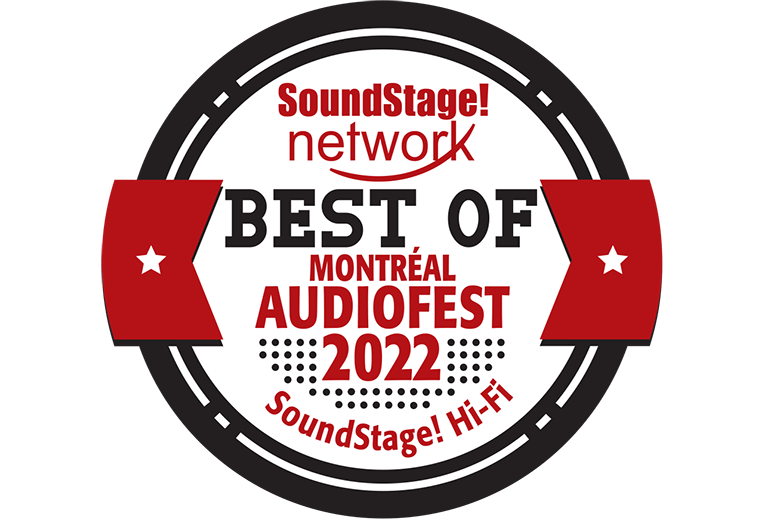 All told, Montreal Audiofest 2022 can be considered a success. So, like I did last month for Florida Audio Expo 2022, which was held in February and was also successful, I’ve selected some products that I think deserve to be called the Best of Montreal Audiofest 2022. They’re all mentioned in my coverage (I was the only one covering this show for our publications), and all the prices are in Canadian dollars.

When I first walked into the PS Audio room, I thought I’d take a couple of pictures of the company’s new Aspen FR30 loudspeaker, write a quick show-report caption, and that would be that. But I wound up writing an entire article about the loudspeaker for the Global coverage—because the product deserved it. The Aspen FR30 sells for $40,000 per pair. 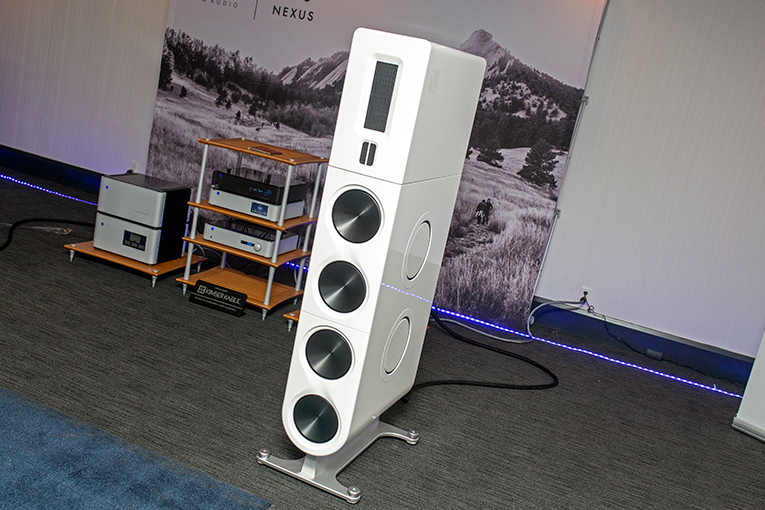 As I stated in that article, I wasn’t expecting too much from the speaker: “When I first saw photos of the new PS Audio Aspen FR30 loudspeaker a few months ago, I knew it wouldn’t be impossible to make it work well, but I realized it might be difficult to design, mostly because of the complex driver arrangement.” That’s because the speaker has six drivers of varying types—dynamic and planar magnetic—on the front baffle alone, plus one driver on the rear and two passive radiators on each side. In unskilled hands, the amalgamation of so many drivers, situated as they are, could’ve turned into a dog’s breakfast when it comes to sound quality. But that’s not what I found: “I consistently heard super-powerful bass, a really rich and robust midrange, smooth highs, and the kind of effortlessness and scale that you get from big speakers with large and/or lots of drivers. I also couldn’t complain about how well the drivers played together—I heard no disparity between what the woofers and planar-magnetic drivers were playing.” 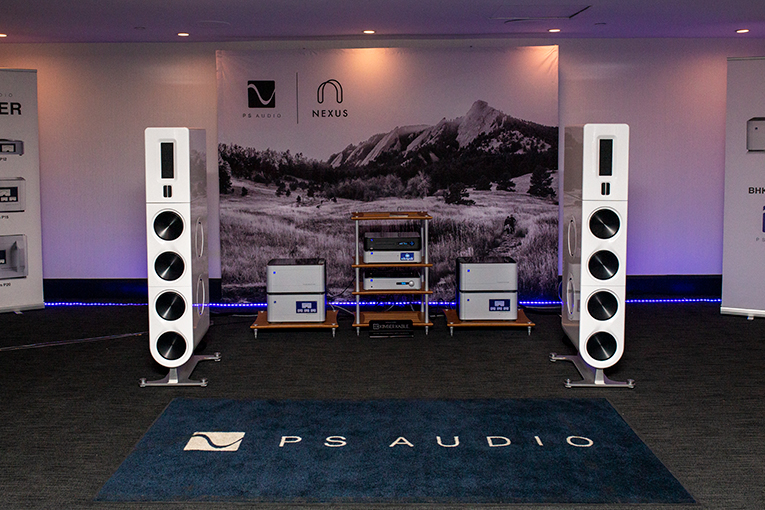 Mind you, I wasn’t convinced that the highs were airy enough. I also left the room torn as to whether the bold industrial design looks good or crappy. And I questioned whether it was wise for PS Audio to have such an expensive speaker manufactured in China. That’s not to say that you can’t make a good speaker in China—many companies do—but when people plunk down this much money for a hi-fi product, they typically like it to be manufactured in the country where the company is located, which, in the case of PS Audio, is the United States. But despite these reservations, I left Montreal convinced that the Aspen FR30 is a laudable, as opposed to laughable, loudspeaker effort. If someone is looking for a pair of big speakers at this price, I think he or she needs to at least listen to the Aspens before buying something else.

When you’re scurrying around a hi-fi show seeking out products to cover, the relevance of some products that you encounter doesn’t always hit home initially. It’s only after the show, when you digest all that you saw, that you realize the importance of certain products and that you should’ve spent more time learning about them. 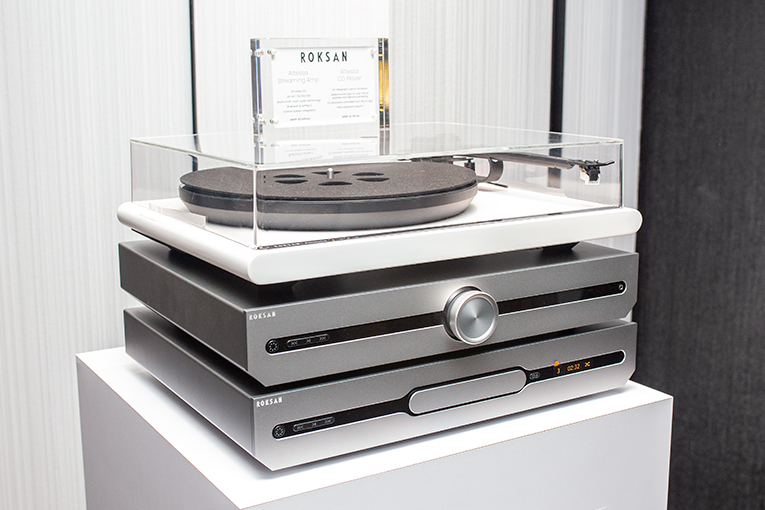 One such product at Montreal Audiofest 2022 was the new Roksan Attessa turntable. It was being shown by Kevro International, the North American distributor for Roksan and its parent company, Monitor Audio. The Attessa turntable was shown in Montreal atop two other products in the Attessa range that you can see in the photo—a streaming integrated amplifier and a CD transport—which you can find more about in my Global coverage. And that was part of my problem—with three Attessa products on show, I was more concerned about getting details on them all rather than examining each one closely. Afterwards, I wished I had spent more time with the turntable, because it has some serious appeal.

Roksan states on its website that the Attessa turntable is “designed, developed and assembled in the UK,” where the brand was born and remains based. It’s a full-meal deal, so you get the turntable itself, plus a newly developed Unipivot tonearm, Roksan’s Dana moving-magnet cartridge, and even a built-in moving-magnet phono preamplifier, all for $2250. What’s more, it looks great—a hallmark of Roksan’s designs, past and present. 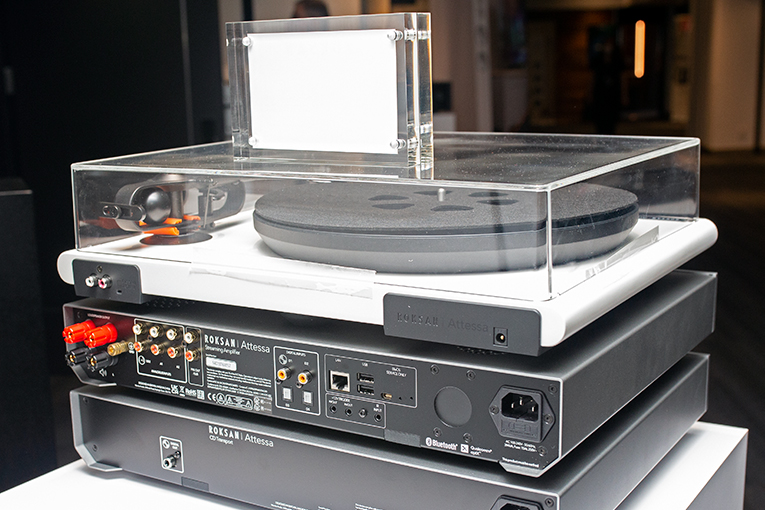 With all these features combined, the Attessa turntable becomes a very attractive product. It’s high-end enough to entice serious vinyl listeners, particularly with its bespoke parts, yet it’s priced low enough to have broad audience appeal. Belatedly realizing the importance of this new product, we have contacted Kevro to request an Attessa turntable for review. Apparently, we should receive one soon.

If you ever talk to Stable 33.33’s Sylvain Pichette, you’ll notice that he’s not outspoken—like, at all—or willing to boast about what he makes. Unlike many founders of hi-fi companies, he’s a very quiet guy. That could be why his company, which is based in Gatineau, Quebec, Canada—just a few miles from where I live—could be one of the best-kept secrets in high-end turntables right now, even though he has been designing them for more than 15 years. But hopefully this article will change some of that, because Stable 33.33 appears to be producing some world-class designs, and cool accessories, that should be better known around the globe. 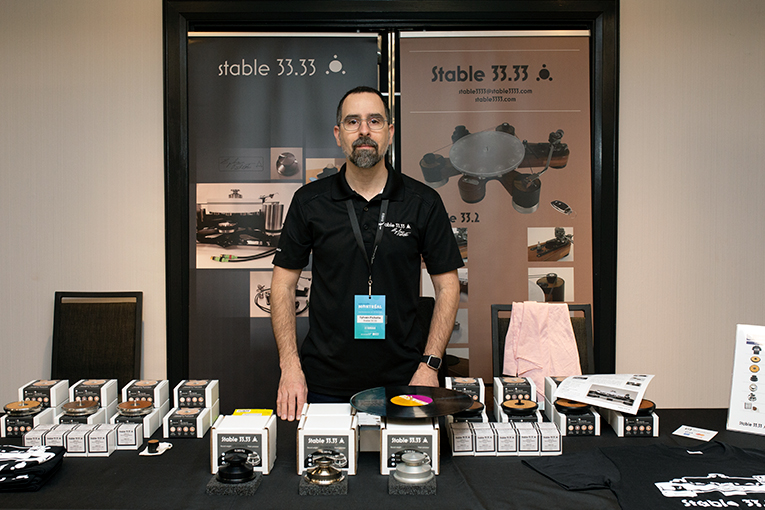 Pichette’s latest creation is the 33.2 Mk2 turntable, which sells for $11,500. It comes without a tonearm and cartridge, though the website says it’s “offered with a Reed™ tonearm of your choice,” and that it “can also be adapted for most tonearms available on the market by simply replacing the tonearm mounting plate.” The 33.2 Mk2 looks quite a bit different from the 33.2, which he showed in Montreal in 2019, but that could be because it reportedly takes inspiration from Stable 33.33’s flagship ’table, the 33.1. That leads me to believe that 33.1 Jr. might’ve been a more appropriate name. 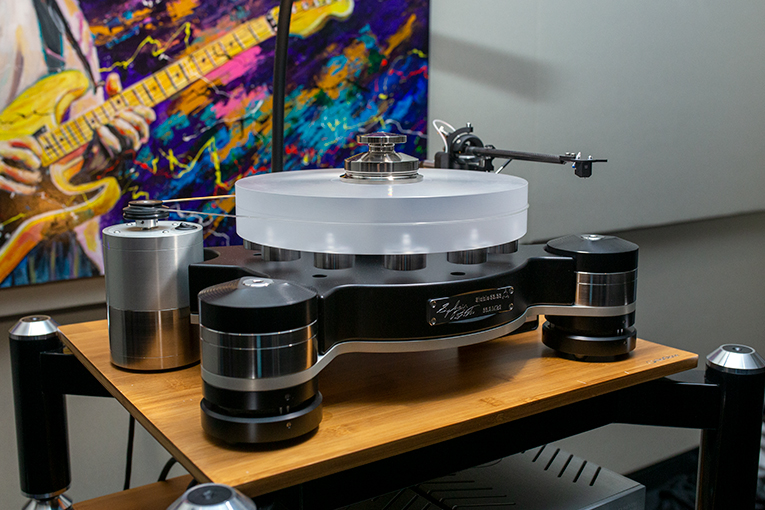 According to the product literature, the 33.2 Mk2’s tonearm plate has “three layers of different thicknesses and densities for an inert result”; its acrylic platter is 50mm (almost 2″) thick, but also has 12 stainless-steel weights on its underside for a total weight of 5.9kg for “maximum rotational stability”; and its large, unique feet have “three polyurethane domes paired with a spring suspension wrapped in natural fibers to convert energy into heat and control movement.” Driving the 33.2 Mk2 is a 7.5W synchronous AC motor with two pulleys—one for playback at 33.3 rpm, the other for 45 rpm. 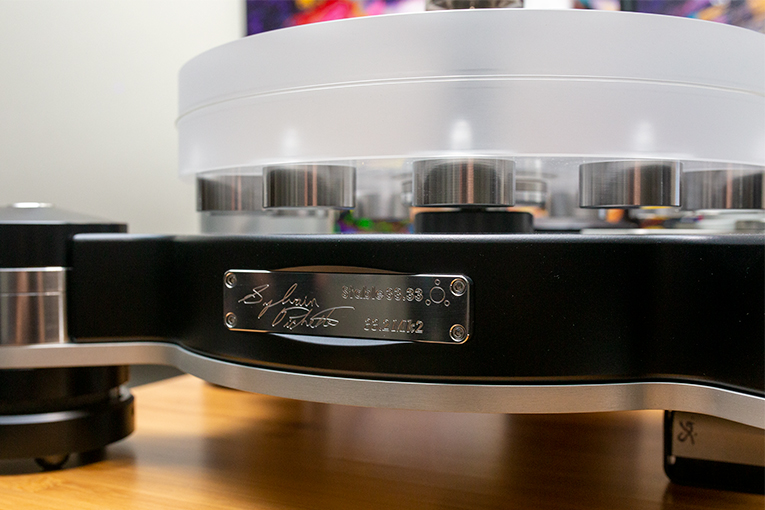 I could go on about the 33.2 Mk2’s features, but there’s only one thing I really want to add to what I already wrote here and in the coverage: unlike the 33.2 I saw in 2019, which was a little crude-looking because the chassis was mainly naturally finished wood, the 33.2 Mk2 looks like a top-drawer turntable through and through. The 33.2 Mk2’s chassis is made from a combination of an “inert synthetic material” (the main black part) and metal (the silvery parts), all well styled and finished to perfection. In fact, its construction, appearance, and features also stood out to many others at the show, because while traipsing through the Montreal Audiofest 2022 rooms and halls, I was told numerous times that I must go check out Pichette’s new turntable before I leave. I’m glad that I did, because Pichette’s design deserved to be included in our show coverage—and merits being recognized as one of the best products at Montreal Audiofest 2022.

By the time you read this article, AXPONA (Audio Expo North America) will have happened in Chicago—it ran from April 21 to 23. Since I’d already been to Florida Audio Expo and Montreal Audiofest, I decided to take a pass on that event and wait for High End 2022, the world’s largest hi-fi show, which will be held from May 19 to 22 in Munich, Germany. We’ll have a team of four there. My goal is to assist with the coverage that will appear on SoundStage! Global, then have the Best of High End 2022 products picked, written up, and published in this space on June 1.