In a SoundStage! Shorts video filmed in August 2016 and released last month, Gryphon Audio Designs’ founder, Flemming E. Rasmussen, says: “The Diablo integrated amplifier has been a huge success for us, more than we would ever anticipated and hoped for.”

The original Diablo was released in November 2005; its replacement, the Diablo 300, reviewed by Hans Wetzel for SoundStage! Ultra in September 2016, was launched in May 2015 in Munich, Germany, at High End 2015. (Our video focused on the new Diablo, the 120, which debuted last month.) That the original Diablo lasted on the market for nearly ten years without change is a testament to great product design. Still, Gryphon found so many ways to improve it that, as Hans wrote in his review, the Diablo 300 “shouldn’t be thought of as a step in a journey, but as the final destination.” In Europe, the Diablo 300’s base price is €12,800. The unit Hans reviewed included the optional DAC module, which adds €4800 to that price; an optional moving-magnet/moving-coil phono stage adds another €1800. (Currently, Gryphon Audio Designs has no US distributor, hence the lack of equivalent prices in USD.) 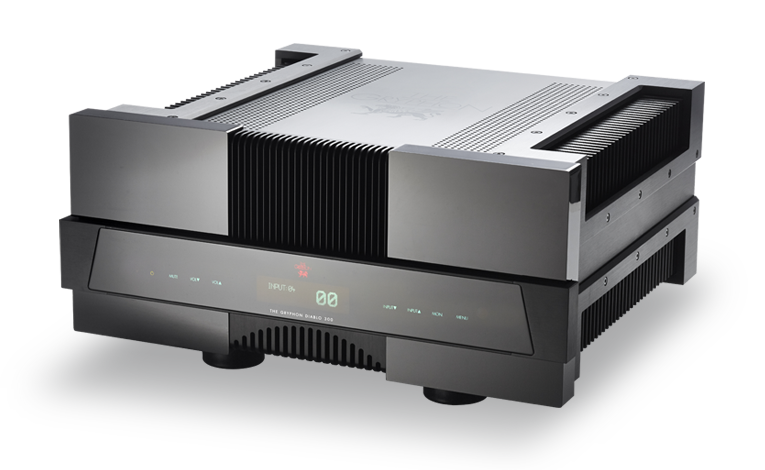 Designed and built entirely in Denmark, the Diablo 300, at 18.9”W x 9.2”H x 18.1”D and 84 pounds, is larger and heavier than most integrated amplifiers currently on the market. In Hans’s word, it’s a “beast” -- dark and formidable, with a look that he described as being “more like something created in Tolkien’s Mordor than in Denmark, officially the world’s happiest nation. . . . The Diablo 300’s brutalist aesthetic may not be pretty, but it sure is provocative.” The big, heavy, exceptionally well-built Diablo 300 makes a strong aesthetic statement; it will be a big presence in any listening room.

Commensurate with the Diablo 300’s size and weight is very high power output for an integrated amplifier. Gryphon specifies the Diablo 300 as delivering 300Wpc into 8 ohms, 600Wpc into 4 ohms, or 950Wpc into 2 ohms. With that much power on tap and stability into lower impedances, Gryphon claims that “the Gryphon Diablo 300 will remain rock solid when confronted with even the most viciously reactive loudspeaker loads.” Indeed, Hans found that the 300 had no trouble driving any speakers he had on hand to any volume level: “The Diablo 300 is designed to easily corral any speaker on the market -- it never broke a sweat, even when I presented it with a challenging load and pushed it hard.” 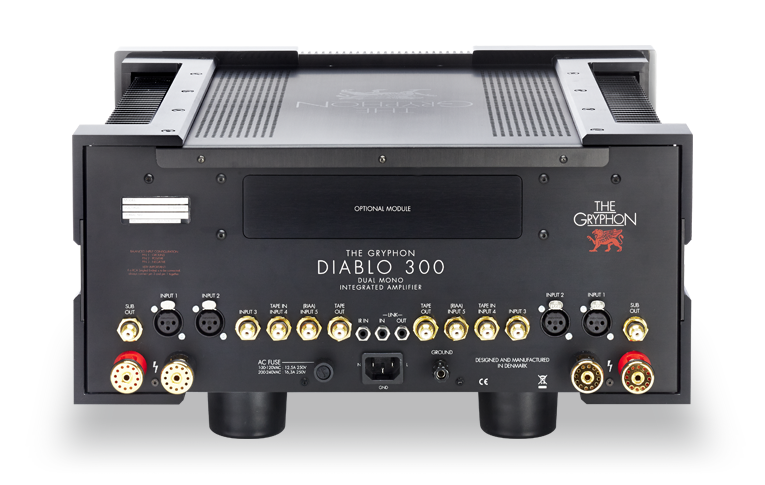 At first, however, Hans feared what many might fear in an integrated amp with the Gryphon’s power specs -- that such high output can be delivered only at the expense of sonic refinement. That’s probably because, decades ago, many audiophiles found that the best-sounding integrated amplifiers were usually the lower-powered ones -- less than 100Wpc or so. But as Hans discovered, times have changed: “I expected Gryphon’s übermasculine he-amp to sound boorish and something of a lout, with punctuated highs and overemphatic bass. But the Diablo 300 had all the grace and finesse of a ballet dancer. Like a Navy Seal who joins a seniors book club, or a lumberjack addicted to yoga, the incongruity was almost risible.”

He also found the Diablo to sound realistic and refined:

In evaluating the sound of an audio component, I often begin with the human voice, to establish a baseline for the product’s tonality, imaging, and resolution. The Gryphon allowed me to hear that any tether between Magico’s S1 [loudspeakers] and Art Garfunkel’s voice in the title track of Simon & Garfunkel’s Bridge Over Troubled Water (16-bit/44.1kHz ALAC, Columbia) had been dramatically loosened: His voice seemed to occupy a firmer, more clearly defined point in space between the speakers, resulting in a more holographic reproduction. Moreover, Garfunkel’s voice took on a sweeter, more golden quality. This didn’t sound like an outright tonal coloration, but simply greater bloom and vivacity than I’m used to hearing. It was delightful to hear one of my favorite songs reproduced with such a full-bodied midrange. Even the quite audible noise floor of this recording, and the cymbals that appear halfway through the track, took on an organic feel that helped bridge the gap between the electrical and mechanical reproduction of music and the real thing.

The Diablo 300 reproduced the opening kick drums of “Dreams,” the first single from Beck’s as-yet-unnamed next album (16/44.1 FLAC, Virgin), with hearty weight: full but not fulsome. The guitar in this track has a raw, distorted edge that could well teeter toward brightness, but the Diablo’s dulcet top end seemed to rein this in for the occasional stanza-ending riff. Its treble response was as extended as that of any other amp I’ve recently reviewed, but was also incredibly smooth -- overall, the top end was less lively and spacious than I expected it to be. There was no hint of zing or sparkle, just effortless extension. 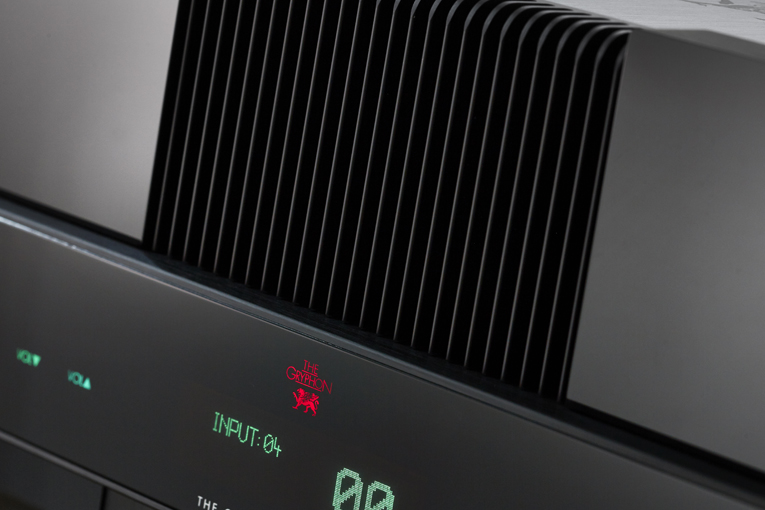 Hans compared the Diablo 300 to Hegel Music Systems’ H360 ($5700), an outstanding DAC-integrated that’s his reference and is considered a benchmark for topflight sound quality at a reasonable price (the H360’s predecessor, the H300, was recognized as a Recommended Reference Component in September 2013):

But despite how accomplished the Hegel is for its relatively modest price, in many ways the Diablo 300 is just better. The H360’s simple, folded-metal case is child’s play compared to the Diablo 300’s overbuilt, military-grade armor. There’s also the Diablo’s pomp and circumstance. The Gryphon’s appearance has a sense of occasion; the Hegel merely looks like a nice piece of electronics.

But it’s the sound that counts. Compared to the Gryphon, the Hegel sounds flatter, more compressed. The Diablo was also far more quiet. While both are highly resolving, I could consistently hear a smidge more through the Diablo 300. Further, the Hegel’s ultraclean, ultrasmooth sound differed from the Gryphon’s, which was sweeter and more robust. The biggest difference between the two was the level of engagement with the music that I enjoyed. The Gryphon was a big step up from the Hegel in its musicality and realism. With the H360 in my system, especially through Magico’s top-shelf S1 Mk.II speakers, I felt I was listening to a very high level of reproduction of music. But with the Diablo 300 driving the Magicos, my experience of music was more transcendent, pushed the envelope more; in a word, it sounded more real. The Hegel is excellent for the money. The Gryphon is excellent, period. 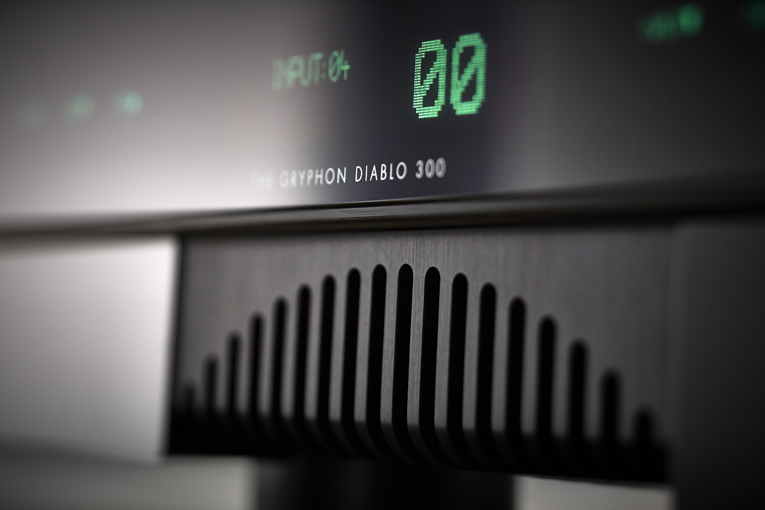 Hans found the Diablo 300 so excellent -- so well built, so powerful, so good sounding -- that he feels someone who buys it probably won’t want to replace it for a long time, if ever. While conceding that the Diablo 300’s “bold styling won’t appeal to everyone,” Hans concluded that “for those who can’t look away, nothing else will do. The Diablo 300 is a mad, inimitable masterpiece.”

It’s precisely all of those qualities that make Gryphon Audio Designs’ Diablo 300 this month’s welcome addition to our list of Recommended Reference Components. There may be no better integrated on the market.