At $2999 USD, HiFiMan’s new HE1000 headphones cost about two-and-a-half times as much as the company’s previous top headphone model, the HE6 ($1299, discontinued). But as Brent Butterworth pointed out last month, in his review of the HE1000s on SoundStage! Xperience, the HE1000s are “also a step up in sophistication.”

Brent began by pointing out one of the HE1000s’ key technical features: the thinness of the polymer planar-magnetic diaphragm in each earpiece. These diaphragms are what are moved back and forth to produce sound waves, and in the HE1000s, each panel’s thickness is measured in nanometers (billionths of a meter) -- they’re incredibly thin, and thus lighter and quicker to respond to the signal from the conductors. Brent went on to describe some of the HE1000s’ other technical features:

The HE1000s also benefit from the asymmetrical magnet arrangement developed for the HE560 and HE400i ’phones. This design reduces the amount of magnet and grille material between the diaphragm and your ear, which should in turn reduce sonic colorations. A patented “window shade” design that serves as the rear (outward-facing) grille also helps minimize reflections and colorations. 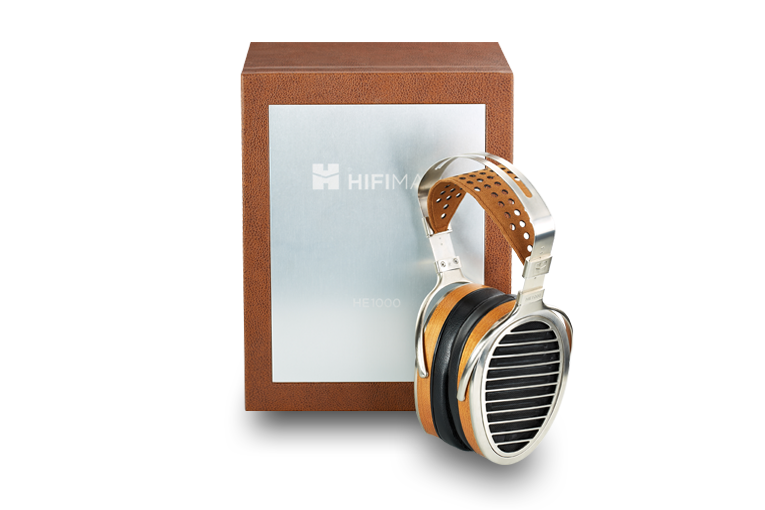 The HE1000s’ build quality is topflight, and the materials fit the high price: wooden earcups, leather-and-velour earpads, and a stainless-steel headband with a leather strap. The headphones and supplied cables -- one terminated with a standard 1/4” headphone plug, the other with a four-pin XLR connector for use with a balanced headphone amp -- are packaged in an attractive box. Brent noted that there is no cable with a 3.5mm connector for a smartphone, or one with an inline remote control, which indicates that these ’phones are designed for home use, not music on the go.

The HE1000s’ earpads weren’t quite as comfortable as the all-leather pads found on headphones from Audeze, whose products Brent is very familiar with. Still, Brent found the comfort level of HE1000s to be very good:

The HE1000s are one of the four or five most comfortable audiophile headphones I’ve worn. They’re light -- 25% lighter than, say, the Audeze LCD-Xes, according to my scale -- and the headband’s clamping force is not annoyingly tight. 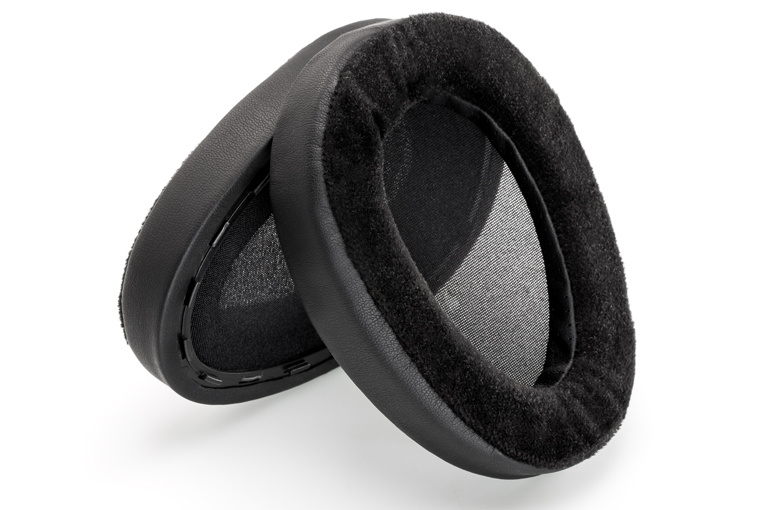 While the HE1000s’ technology, build, materials, and comfort levels rate high, Brent thought that they truly excelled in sound quality. After conducting head-to-head comparisons with HiFiMan’s own HE560 ($899) and Audeze’s LCD-X ($1699) models, both also planar-magnetic designs, he wrote:

With “I Remember You” [from The Gene Ammons Story: Gentle Jug (16-bit/44.1kHz WAV, Prestige)] the HE1000s sounded lively and lifelike. I got all the wonderful, natural breathiness and power of Ammons’s legendarily robust tone. The HE1000s made it easy to hear that some reverb had been added; his sax was mostly isolated in the left channel, and so was the reverb -- not a natural effect unless you’re in a studio that’s half acoustically live and half acoustically dead. The cymbals -- to me, the toughest instrument for headphones to reproduce accurately -- sounded like real, unadulterated cymbals made of spun brass, not some inferior metal and/or augmented with rivets to make them sizzle. (Many headphones make cymbals sound as if they’re made from aluminum or sheet steel or even old baking pans.) For my taste, the HE1000s had perhaps 0.5 to 1dB too much treble with this recording, but they sounded a long way from bright. I guess bassheads would find the sound thin, but I doubt any open-back headphones would deliver enough bass to keep such listeners happy.

The Audeze LCD-Xes also sounded terrific with Gentle Jug, with a spacious, natural sound that’s hard for all but a very few headphones to match -- an impressive performance, especially considering that they cost $1300 less than the HE1000s. . . . With the HE560s, the tonal balance was almost the same as through the HE1000s, with just a trace less treble, but the treble didn’t sound as smooth. . . . .

The HE1000s just as impeccably reproduced the sound of a radically different recording: “Rollin’ and Tumblin’,” from Jeff Beck’s You Had It Coming (16/44.1 WAV, Epic). Singer Imogen Heap’s half-moaned vocal sounded solid through the HE1000s, almost as if it had materialized in space -- much the same effect I hear from a pair of great speakers, but inside my head instead of out in the room, between the speakers. The heavily reverbed chords from Beck’s guitar that end the main riff floated above and to the sides of my head, as if I were hearing the performance in a small gymnasium. The LCD-Xes’ sound quality was very close to this, although, as I’d experienced with the Gene Ammons track, the sound was a bit darker and a little less ambient. Both headphones produced a coloration of a slight coarseness in Heap’s voice: the HE1000s in the lower treble, and the LCD-Xes in the upper midrange, 1000Hz or so lower. Through the HE560s, Heap’s voice sounded overall more coarse, less realistic, and less solidly imaged, and the HE560s couldn’t match the HE1000s’ huge ambience.

Brent then moved on to pop:

Even on a fairly standard piece of pop music -- Glen Hansard and Markéta Irglová’s performance of Hansard’s “When Your Mind’s Made Up,” from the soundtrack of Once (16/44.1 WAV, Columbia) -- the HE1000s proved their near perfection. I felt I’d somehow connected my brain straight to the artists, so natural was the sound and so negligible the colorations. I especially loved the sense of space around the snare drum; I could almost feel its presence in the room with me. And again, I loved the way the HE1000s created such solid virtual images of the voices. 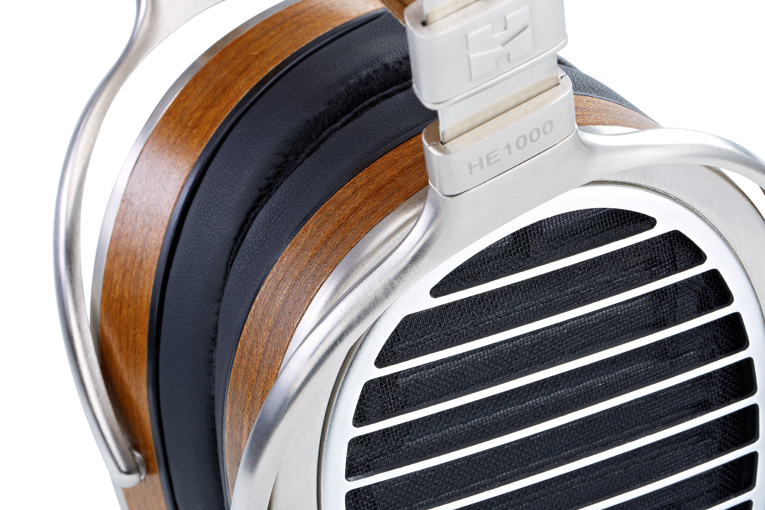 Recording after recording, Brent was so consistently impressed with what he heard from the HiFiMan headphones that he had difficulty finding deficiencies in them. Toward the end of his listening sessions, he tried to find flaws in the HE1000s by streaming lower-quality recordings, thinking that the ’phones’ high level of detail might highlight problems. But he found that while the HE1000s didn’t hide any recording flaws, neither did they exacerbate those flaws. He summed up his listening impressions:

Over the course of more than a month of listening, I could find nothing to dislike about the HE1000s. Some might say they sound a little too bright -- but I wouldn’t, and I hate bright-sounding headphones. They’re probably the most spacious- and detailed-sounding headphones I’ve tested, and their design is well thought out from every angle. Many audiophile headphones are recommended with serious caveats -- they’re heavy, or they need to be driven by a powerful, expensive amp, or they don’t produce enough bass, or they don’t sound good with low-quality recordings. But every time I wore the HE1000s, they sounded and felt great for hours.

I’m always skeptical when I read rave reviews of some new product. It’s so easy to be impressed with something new, sometimes just because it sounds different from what you had before.

In the case of the HiFiMan HE1000 headphones, I’m not worried. These headphones really are so good that I’m confident in raving about them, and confident that you’ll largely agree -- maybe even totally agree.

I don’t know if the HE1000s are the ultimate headphones. But considering their impeccable sound quality and above-average comfort, I think they’re the closest thing I’ve found.

Going out on a limb with a rave review is something Brent Butterworth rarely does. But his Conclusion is a ringing endorsement of the HE1000 headphones. They may be expensive, but for everything they offer -- and mostly for their sound -- they wholly deserve to be included in our list of Recommended Reference Components.