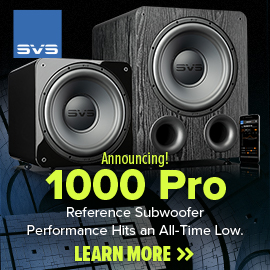 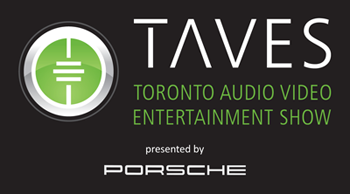 At the very end of September, I covered the Toronto Audio Video Electronics Show (TAVES) with Hans Wetzel. In the middle of October, Jeff Fritz and I traveled to Denver to cover the Rocky Mountain Audio Fest (RMAF). There were a number of great-sounding systems at both events, but at the end of the day, five really appealed to me. I also met two salesmen who stood out as worse than the rest. This month I write about the three TAVES systems and the two salesmen; next month it’s two systems from RMAF and no salesguys.

If we gave out an award for Worst Salesmanship of the Show, the team in the Audio Excellence room would win it. Audio Excellence is a Toronto-based retailer, but if what one of the salesmen said to me is representative of the rest of their team, they know next to nothing about the products they sell. He tried to convince me that KEF’s new LS50 has the exact same drivers as the original LS3/5A, a BBC-inspired product that came to life in the 1970s. I almost responded with the correct version of the story, which has to do with KEF simply making the drivers for those vendors wanting to produce the LS3/5A, but then I thought, "Why bother?" I wonder how many others he told the same story to -- and how many believed him.

In the same room (Audio Excellence seems to sell a lot of stuff) was a manufacturer's rep -- not really a salesman, but close enough -- who: a) dismissed my repeated questions about whether a certain pair of speakers sitting idle in the room would be played at any time during the weekend, because I wanted to hear them (I kept saying, "I don’t mean right now," but that fell on deaf ears); and b) seemed really interested in telling everyone about certain CDs he was popping into the player drawer, even though no one cared, and most there would have rather listened to something else, about which he didn’t seem to care. I turned to Hans and said, "How the hell do guys like these sell anything?" Perhaps they don’t. 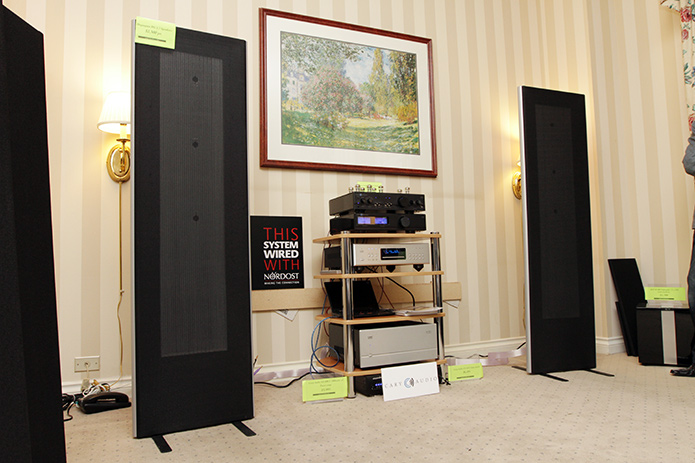 Luckily, to save them from themselves, Audio Excellence did have a good system set up at one point during that weekend, and it was one of the top-sounding systems at TAVES. It comprised Cary Audio Design’s CD 303T SACD/CD player, SLP-05 preamp, and SA-200.2 power amp, all feeding a pair of Magnepan 1.7 speakers. The system was wired with Nordost, though I didn’t catch the models or prices. In Canada, the player retails for about $6500, the preamp about $8500, and the power amp about $4000. But the kicker was the speakers -- just $2300/pair CAN, less in the States.

Cost-no-object sound quality spewed forth from what are, by high-end standards, very inexpensive speakers. The sound was rich, detailed, and robust through the midrange; sweet and effortless in the highs; and surprisingly full and deep in the bass. Color me impressed -- Hans, too. But I couldn’t help but wonder: Do the 1.7s need $20,000-plus of electronics and wire to sound so good? Hard to say, but if I were interested in replicating the sound of such a system, I’d buy the speakers first, then add components until the sound was to my satisfaction. I’d bet a superb-sounding system could be built around the 1.7s for much, much less than the Cary system cost, particularly with regards to the source and the preamp, which are pretty pricey; in fact, a high-powered integrated amp with a DAC just might do. 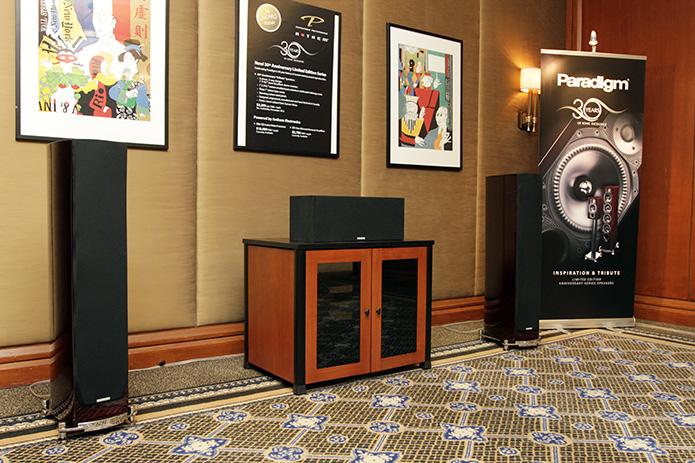 Another speaker that blew my socks off was Paradigm’s new Tribute, which I wrote about at TAVES and which sells for $6600/pair in Canada. Paradigm’s Signature S8 is priced higher than the Tribute, but I’m not so sure it’s the better speaker. The Tribute’s styling is nicer than the S8’s, its cabinetwork looks superior, and the sound radiating from them was unlike that of any other Paradigm speaker I’ve heard, and nothing short of spectacular: rock-solid bass, mids so clear they were uncanny, and soaring, extended highs. The pair also cast a soundstage that thoroughly filled their end of a very large room. Upstream of the Tributes were Anthem’s new 1000W Statement M1 monoblocks, which at $3500 USD/each might be one of the very best deals in high-end power amps right now; and Anthem’s Statement D2v 3D preamplifier-processor, which at about $9000 was the most expensive component in the rig. Music files were being fed to the D2v 3D from an Apple MacBook Pro.

Paradigm’s Tribute seems special, but here’s the thing: it’s being produced, at their factory in Mississauga, Ontario, in a limited edition of only 200 pairs. Don’t delay if you want them; in fact, I wouldn’t be surprised if, by the time you read this, they’ll be mostly gone -- Paradigm sells a lot of speakers in any given day, and this model should sell out quicker than most. 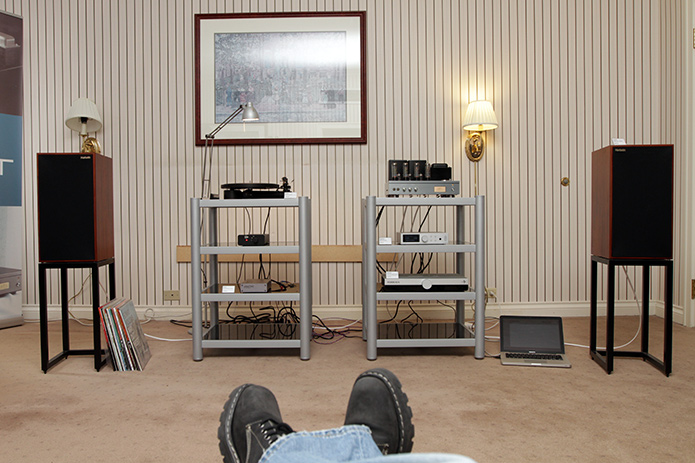 Finally, there was what I call a "kick my feet up and listen to" system from Canada’s Planet of Sound Distribution. Their best-known client brand is the UK’s Harbeth Loudspeakers, and this smooth-, lush-, relaxing-sounding system was built around the Harbeth Compact 7ES-3 ($3599/pair CAN). Also in this system were the Audiolab 8200 M-DAC digital-to-analog converter, at a highly affordable $899 CAN, and the Air Tight ATM-1S tubed integrated amp, which comes from Japan and costs a lot more: $10,299 CAN. Music files came from a MacBook sitting on the floor. (Once again, I didn’t catch the wires -- shame on me.)

This mixture of gear -- inexpensive, moderately expensive, and quite expensive -- produced a sound that was fantastic, and will appeal to those who value high musicality over riveting detail. What’s more, if we gave an award for Most Inviting Sound and Least-Offensive Salesman of the Show, this room would’ve won it. Planet of Sound’s proprietor, Gunnar Van Vlie, said hardly a word to me while I was there, let me listen to what I wanted to, and knew the correct details about his products. Imagine that.

That’s how it went down in Toronto. Next month, I’ll describe two systems I heard in Denver, at RMAF, that I felt were special -- and they’re not systems that people who know me would expect me to write about. Check back next month.