In Roger Kanno’s review of the Bryston 4B3 stereo/mono amplifier, published in June 2017 on SoundStage! Hi-Fi, he described its sound as “virtually faultless,” praised its “ability to drive just about any speaker with ease,” and declared that it “may well be the best value today in a high-end, high-powered, solid-state amplifier. . . . If I were in the market for a new amp, I’d buy the Bryston 4B3 without hesitation.”

The 4B3 is part of Bryston’s new Cubed series of amplifiers. That Bryston has set such a high standard of sound quality and value with the 4B3 has much to do with the company’s long experience in designing and building amplifiers and with the history of this model itself -- the first 4B was released in 1976, and Bryston has been improving it ever since. Roger noted the similarities between the 4B3 and previous 4Bs:

Inside, the 4B3 is a neatly laid-out design consisting primarily of circuit boards with little point-to-point wiring. Like the 4Bs before it, the 4B3 is a dual-mono, solid-state amplifier, with two separate power supplies that include two large, stacked toroidal transformers. It uses Bryston’s Quad Complementary output stage, which Bryston claims combines the sonic advantages of a class-A output stage and the efficiency of a class-AB output stage with low distortion and linear operation. 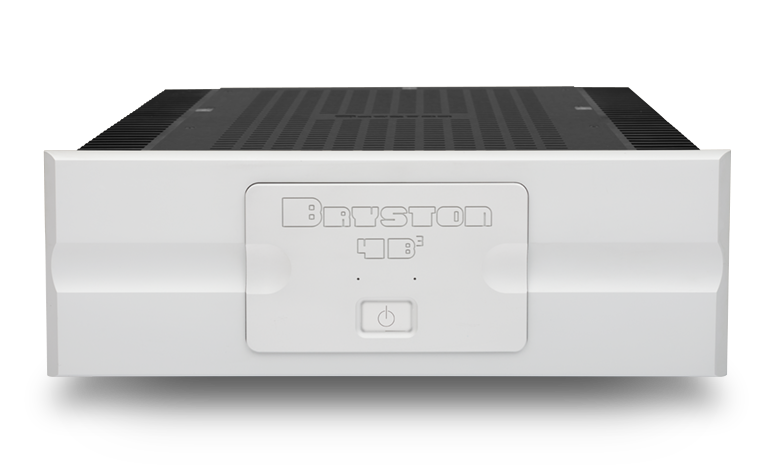 Bryston specifies the 4B3’s stereo output as 300Wpc into 8 ohms or 500Wpc into 4 ohms. As a monoblock, its output into 8 ohms is 900W. These power ratings are the same as for the previous 4B, the 4B SST2, which we added to our Recommended Reference Components list in January 2011. But as Roger pointed out, the 4B3 includes some advances over the 4B SST2:

Most notable is the 4B3’s new input stage, which Bryston says is extremely linear, with very high gain and very low distortion. This new, patented amplifier and signal filter circuit were developed in conjunction with the late Dr. Alexandru Salomie; Bryston says they improve the rejection of common-mode, EMI, and RFI noise.

Bryston’s reputation has always been based on their products’ high qualities of build, sound, and reliability, but not so much on their appearance. The 4B3 looks better than past 4Bs:

The 4B3’s build quality is exceptional though not over the top, as with some ultra-expensive high-end gear. The chassis is extremely solid, with heavy-duty heatsinks running the full length of each side panel. . . . The edges of the faceplate and front handles are more rounded than those of previous 4Bs, and the handles are part of the 19”W faceplate. A 17”W faceplate, without handles, is also available. My review sample was outfitted with the 19”W faceplate in silver, which I thought extremely handsome in a stoic, industrial sort of way -- this amp is attractive enough, but looks as if it means business. 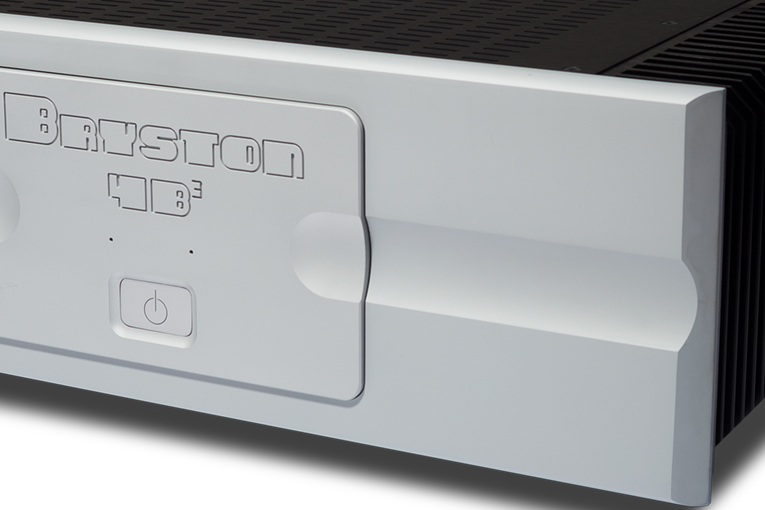 Roger was talking about the business of making sound:

I heard sound that was at once brawny and precise, yet very subtle and refined when the music required it. I’ve said similar things about various amplifiers in the past, but the Bryston was truly remarkable in how it sacrificed little, if any, power output while retaining an extremely sophisticated and nuanced sound that I hadn’t thought possible for $5695 in 2017 dollars.

For example, the sound of the 4B3 was intense with Yello’s newest album of electronica, Toy (16-bit/44.1kHz FLAC, Universal). The deep synth chords at the opening of “Dialectical Kid” were rendered with such tautness and specificity that it sounded as if these obviously artificial instruments were actually present in my room, though I knew this couldn’t be true, and the Swiss duo’s robotic vocals were eerie and disembodied in a strangely convincing way. The diverse electronic percussion bounced wildly between the speakers without ever losing its razor-sharp imaging, creating an enveloping and holographic soundstage. The rapid-fire sound of “Lost in Motion” was a real treat -- Fifi Rong’s mesmerizing singing, framed by the frenetic instruments, laid out before me a vast soundscape.

Depeche Mode’s latest, Spirit: Deluxe (16/44.1 FLAC, Mute/Sony), is another audiophile showcase, with plenty of dense, rhythmic bass and a deep, wide soundstage. Through the 4B3, it sounded fantastic. “So Much Love (Machine Mix)” had a driving beat with real kick, and the synthesizer effects filled my room fully and solidly, without overwhelming it. The vocals on many of this album’s tracks are heavily processed to sound slightly distorted, but I could still make out the words with ease, so clear was the 4B3’s sound. . . .

And was this amp ever quiet. With no signal playing, I had to put my ear right next to the tweeter of one of my KEF R900s before I could hear any hiss. In my system, with most amps, I can usually hear some sort of background noise from a few inches away. 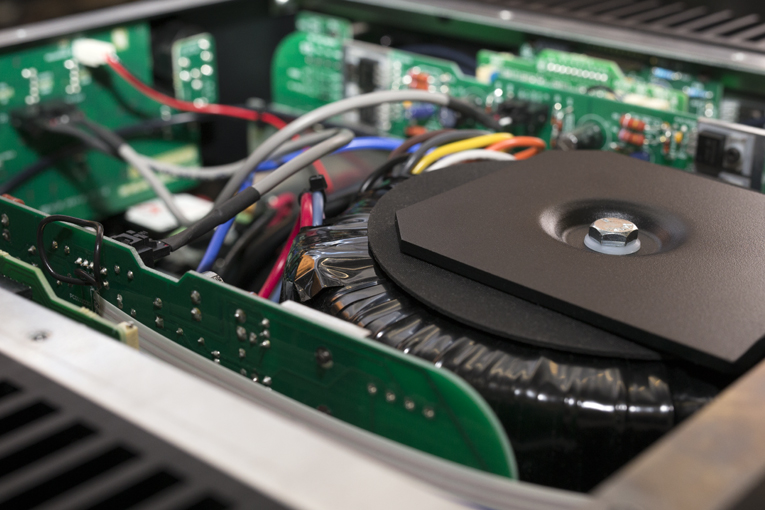 Roger was also taken aback at how loudly and cleanly the 4B3 could play, even when pitted against his reference Anthem Statement M1 monoblocks ($7000/pair), each of which delivers 1000W into 8 ohms:

Just for fun, I cranked up Boney M.’s Diamonds: 40th Anniversary Edition (16/44.1 FLAC, Sony). With the Bryston, I was able to play the KEF R900s so loud that I feared for their safety, though I heard no clipping, or even compression of any kind. With their much, much higher power output, the Anthems have no problems driving the KEFs to these insanely high levels -- but much to my surprise, the Bryston sounded a little clearer at extreme volumes, and was better able to sort out the voices, thumping disco bass, and clapping, all while maintaining a rock-solid soundstage.

Male and female voices sounded more distinct through the Bryston, which also rendered men’s speaking voices more realistically. The Anthems blended each syllable slightly into the next, rather than separating them as clearly as the Bryston 4B3. The clearness of the Bryston made it seem subjectively as powerful as the Anthems -- it, too, never showed any signs of stress, and its transparency remained, regardless of the output level. At more moderate volumes, that hint of warmth in the Anthems’ sound did give voices a pleasing weight in contrast to the Bryston’s refreshing bell-like clarity -- but with most recordings, I found myself preferring what I heard from the 4B3. 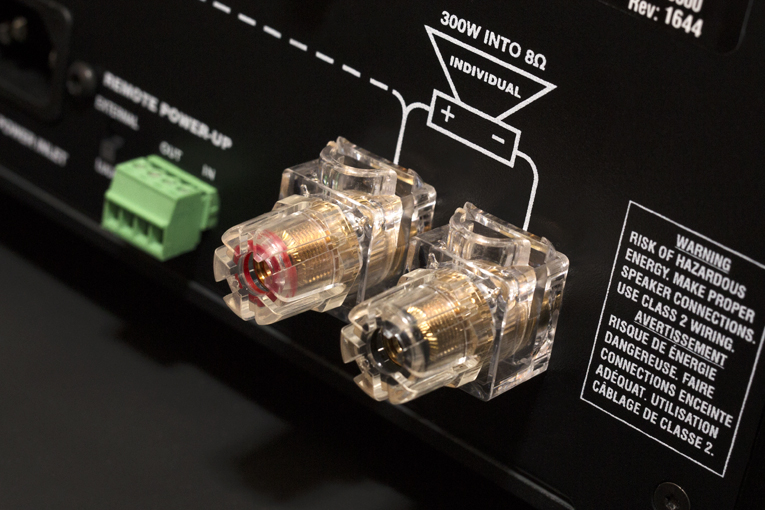 In the closing paragraph of his review, Roger described the Bryston 4B3 as being “a true classic, continuing in the tradition of the legendary Bryston B amps that came before it. . . . To better its combination of power output and finesse, you’ll likely have to pay much more” -- something that could also be said of 4Bs that came before. The Bryston 4B3 is a top-shelf amplifier that can be considered a benchmark for performance and value -- and a natural addition to our list of Recommended Reference Components.