Hard on the heels of my review of the Karan Acoustics KA I 180 integrated amplifier, I was asked if I’d like to review Blue Circle Audio’s Katlas. Having also recently spent some time with a Behold Gentle, I was in Integrated Amplifier Mode and heartily agreed. Blue Circle Audio’s line runs the full gamut of audio equipment, and at price points that would suit almost any audiophile. Soon I was in contact with Gilbert Yeung, Blue Circle’s owner and chief design engineer. Three or four weeks later, he showed up at my door with a Katlas, set up the Katlas in my system, and made sure everything was working properly.

Blue Circle Audio makes tubed electronics, but they’re equally adept with solid-state offerings -- quite remarkable, once you think about it. BCA makes four integrated amplifiers, including one tubed model, the FtTH.

The well-made Katlas, however, is a solid-state design that outputs 145Wpc into 8 ohms or 220Wpc into 4 ohms. It measures 19"W x 3.875"H x 15.5"D and weighs 42 pounds. Its feel is very solid, this partly due to its large, heavy toroidal transformer. And while the Katlas’s looks are far from plain, its layout is fairly simple and straightforward, without a lot of fluff. At the center of the front panel are two large, wooden knobs: the one to the left is the input selector, and the one to the right controls the volume via a Shallco attenuator. There’s a power On/Off toggle switch in the lower-right-hand corner, and a blue circle dead center that lights up when the Katlas is turned on. The rear panel is similarly simple: a pair of speaker connectors, three pairs of single-ended input connectors, and a ground-lift switch.

The base price is $4500 USD, but the Katlas’s many options can raise that by quite a bit: USB DAC, phono stage, home-theater processor bypass, preamp output, and cosmetic flourishes such as various faceplate and knob options. The version I reviewed was a basic model, but it did include the remote control option ($345). The remote itself, in the guise of a key fob, worked flawlessly from anywhere in my listening room.

While in my listening room the Katlas performed without any kind of problem. It emitted no pops, thumps, or any other heart-stopping sounds, and everything worked as expected.

On first hearing the Katlas, I was struck by the openness of its midrange and the coupling of a full tonal character to a wide dynamic range, especially with acoustic instruments. The high frequencies had nice extension and never sounded hard or strident. The Katlas let me hear tonal colors clearly, without fearing for my hearing when I turned up the volume. It had an honest way of portraying acoustic instruments, such as the piccolo and the flute, and natural decays -- when those were on the recording. Transient response was also good. Listening to percussion, or the percussive sounds of fingers striking instruments, or the vibrations of bass strings, or the impacts of piano hammers on strings -- all shone through with a good sense of reality.

The Katlas leaned more toward the warmer, slightly darker side of tonal neutrality. This was in no way objectionable -- the sound could never be called bright, overdetailed, or etched. The Katlas was a very good performer throughout the midrange as well. Music seemed to ebb and flow without ever feeling held back or constricted. Performers were present on a soundstage of good width and height and adequate depth. With live recordings, hall sounds, instrumental resonance and decays, and audience noises and conversation all gave me the distinct impression that I was at the performance. The low frequencies were a little on the warm, full side; some people like that, but with some tracks I would have preferred a somewhat tighter sound. Bass extension was good, especially for an integrated amplifier, and should satisfy most potential buyers of the Katlas and the speakers it would most likely be paired with.

Joseph Silverstein’s violin, in Seiji Ozawa and the Boston Symphony’s recording of Vivaldi’s The Four Seasons (CD, Telarc CD-80070), had a rich, woody tone, with a little bit of an edge that made it sound convincingly real. It didn’t call attention to itself, or sound overemphasized in the soundstage. 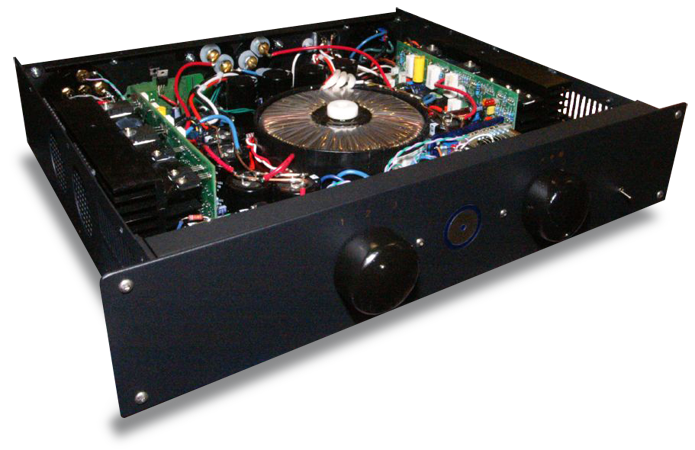 The Katlas’s wide-open midrange performance revealed how smoothly the Bill Evans Trio plays on Sunday at the Village Vanguard (CD, JVCXR-0051-2). Bassist Scott LaFaro, who died not long after this engagement, and drummer Paul Motian sound like the perfect accompaniments for Evans’s lyrical style of playing. John Coltrane’s The Stardust Sessions highlights his expressive, almost hypnotic saxophone playing (CD, Prestige PCD-24056-2). Through the Katlas, his tenor sax was right upfront; the Blue Circle easily revealed the rich tonal colors of this recording.

On Sings Great Songs from Great Britain, an atmospheric album with orchestral accompaniment, Frank Sinatra pays tribute to songs by British composers (CD, Reprise 45219-2). Sinatra is not quite at his best here -- he sounds a bit strained in "London by Night" and "Roses of Picardy" -- but it’s still Sinatra, and that makes this disc compelling. What puts this recording over the top is hearing the orchestra, recorded in a large hall, the decay of the strings, and the foundation set down by the double bass. The Katlas fully captured the bass’s sound, and reproduced the atmosphere on the disc with graceful subtlety. Laurence Juber’s excellently recorded Guitar Noir (DVD-A, AIX 80018) is at or near the apex of what’s possible with the DVD-Audio format; the Katlas exhibited excellent amounts of midrange bloom and presence with this disc.

Recently, I’ve spent a good bit of time listening to three integrated amplifiers at different prices: the Blue Circle Audio Katlas, the Karan KA I 180 ($10,000), and the Behold Gentle ($15,000). The Katlas is one of those little gems you come across every now and then that helps you appreciate how much can be done at a certain price point.

The Gentle was the best-sounding of the three -- as well it should be, at the price. It seemed to do everything just right; in fact, it seriously outperforms many other manufacturers’ separate preamps and power amps. It was, simply, transparent to the source -- utterly neutral. The Karan KA I 180 and the BCA Katlas were a bit closer to each other in performance.

Still, when I listened to the Katlas in this context and focused on its shortcomings, I was surprised. All the Katlas did was play music, at a level comparable to the Karan’s and not that far below the Gentle’s. Where the two more expensive models have a slight edge is in the upper frequencies, where they sound just a bit more refined, with a bit more upper-frequency extension and air, which makes them sound a little faster and more lifelike in the highs. Still, the Katlas wasn’t objectionably bright or etched, something I would have found unacceptable. The Blue Circle’s high-frequency performance was very good, just not quite at the level of the Karan’s or the Behold’s.

It was in the midrange that the Katlas’s strengths shone. The Blue Circle’s and Karan’s reproductions of voices were close, but I give the Katlas the nod for its engaging ability to draw me deeper into the music and make me want to listen to disc after disc. These integrateds were similar in their abilities to throw a soundstage of believable height, width, and depth, and to precisely position performers on that stage, each in his or her own space, with good front-to-back layering. The Katlas and the KA I 180 also both did very good jobs with singers who had been recorded with a live presence.

The Behold Gentle’s more neutral sound made the Katlas seem warmer or even tubey in comparison. As for the low end, again, the Katlas and the KA I 180 weren’t far apart. Both had strong, punchy bass: While the KA I 180’s bass was a touch tighter and deeper, the Katlas’s was fuller -- I was more inclined to get up and dance to pop music and R&B. The Gentle, on the other hand, seemed to get the bass closer to what I felt was right: it was tighter, more extended, and had enough bloom to make me feel I wasn’t missing anything.

But as close as the Katlas and KA I 180 were in sound, the Gentle was, overall, the best of the three. The question, of course, is whether it was worth $10,000 more than the Katlas. Well, if you were going to give me a Gentle or a Katlas, I’d have to choose the Gentle. But if I were spending my own money, there are many other things I could do with that extra $10k and still be very happy with the Katlas.

The Katlas offers high-end performance at a price that won’t have you asking yourself What did I just do? I laud Blue Circle Audio for their accomplishment at the price -- every integrated amplifier I know of that’s as good costs more. Audiophiles who want to step up from mid-fi to high-end performance without breaking the bank should consider the Katlas. It deserves a very serious listen.