The Five Best-Sounding Systems at High End 2012 in Munich 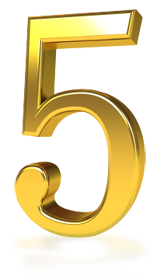 This year, Germany’s annual High End show was held May 3-6 at the Munich Order Center, a beautiful, modern event facility that’s well suited to the display of high-end audio gear. Jeff Fritz and I were there for all four days -- our report, on SoundStage! Global, covers most of the highlights, but missing from it are my five picks for the best-sounding systems at the show. I spotlight them here.

German electronics manufacturer Brinkmann Audio shared a spacious, brightly lit room with the US’s Vandersteen Audio, Harmonic Resolution Systems, and Shunyata Research, who respectively make loudspeakers, stands, and cables. The last link in the playback chain was Vandersteen’s Model Seven speakers, which I’ve heard sound good at other shows -- but never so good as in Munich.

Although the bass frequencies were strong and deep, and the highs well extended and very clean, what floored me was a combination of smoothness and detail in the midrange that was nothing short of spectacular. Then there was the imaging -- the best I heard at High End 2012. When Helmut Brinkmann played an LP of Ry Cooder’s Buena Vista Social Club, I sat there slack-jawed for several minutes, listening to how wide and deep the stage was, and how tangibly present the musicians and their instruments were in that space. Companies often complain about not being able to create great sound under show conditions -- this room proved that it’s possible. 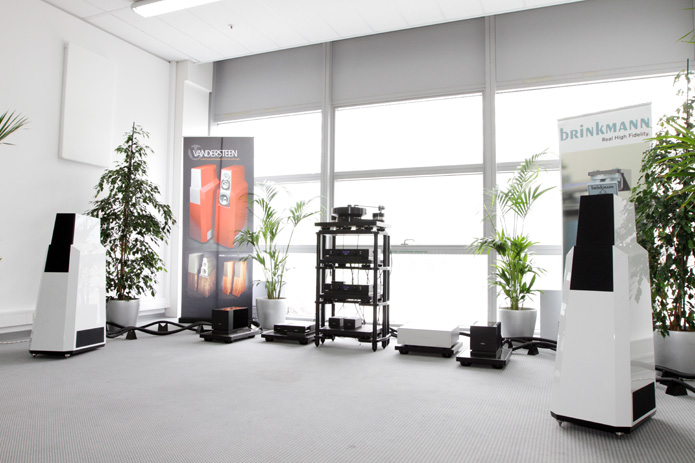 I didn’t jot down the prices of the components in the Brinkmann-Vandersteen-HRS-Shunyata room -- none was a new model, and our coverage focused mainly on new-product introductions -- but based on what I know about some of the gear, it’s safe to say that the total system cost was over $100,000 USD. In fact, all but one of the systems I describe in this article cost a fortune that, these days, only a lucky few can afford to spend on a stereo.

Which is why I was so happy to see and hear the new KEF LS50, an innovative, stand-mounted minimonitor speaker that KEF claims to have created in the spirit of the original LS3/5A monitor designed by the BBC in the 1970s, which used KEF-made drivers. I was impressed with the LS50’s advanced technology, which I wrote about at length in our show coverage, but I was just as impressed with the price: $1499.99/pair. Now that’s a speaker many more people can afford. KEF had hooked up the LS50s to some Arcam electronics, and were playing music files on a MacBook Pro running JRiver Media Center in Windows mode. 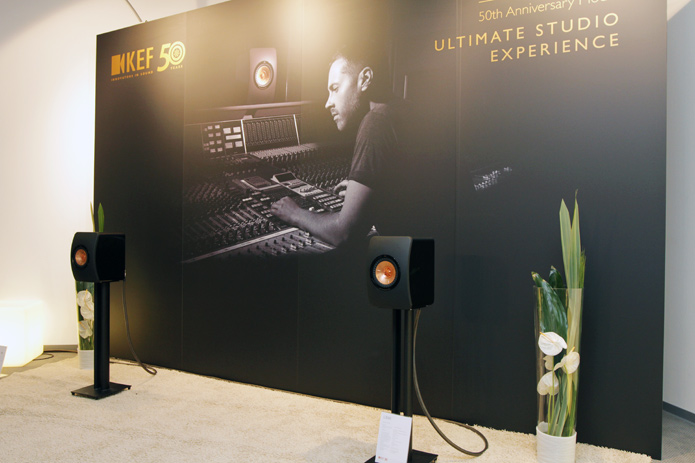 The sound wasn’t just great for the price; it was great, period. The LS50s sounded extremely refined overall, and the bass was astonishingly deep and full for speakers measuring only 11.9”H x 7.9”W x 10.9”D. KEF’s backdrop behind the small speakers showed a man at a mixing console, implying that the LS50 is some sort of monitoring tool. What I hope is that people won’t think that’s all it’s for -- the LS50 appears to be an affordable, compact, fantastic-sounding speaker for any listening space of small to moderate size. We’ve requested review samples for an in-depth review, and KEF has agreed; we’ll see if the LS50 sounds as good here as it did there.

It’s no secret that Crystal Cable and Siltech are sister companies. They share the same design team and factory, in the Netherlands, but their products are different enough that you’d never confuse the two. Other than a MacBook Pro computer and a dCS Puccini DAC and U-Clock, all the components they’d set up in Munich were made by Crystal or Siltech. At the end of the chain were Crystal’s Arabesque III loudspeakers, which sounded remarkably good -- better, in fact, than I’d heard them at other shows. Not only has designer Edwin van der Kley refined the design since the prototype debuted at the 2011 Consumer Electronics Show, in Munich they were hooked up to Siltech’s new SAGA three-piece amplification system -- C1 preamplifier (2011), V1 interstage amplifier (new), P1 power amplifier (new) -- with Crystal Cable's new Absolute Dream wires used throughout. 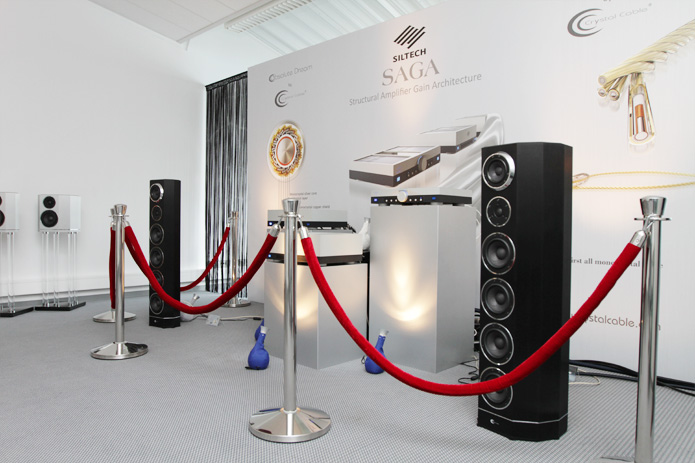 The sound was startling clear and extremely incisive, with dynamic contrasts that belied the speakers’ modest size. Detail was a strong point -- I heard not only the recording, but all the way down to the noise floor. I stopped by the room several times over the show’s four days, and each time it sounded better to me. I’ve heard many Crystal-and-Siltech systems before, but never one that sounded this good -- this great.

I considered omitting the next system because the demo took place off-site, at Munich retailer Life Like HiFi -- but the sound was too good, and Magico’s S5 speaker was too relevant. The problem with off-site exhibits is that they make it harder to cover the show itself. Magico’s Alon Wolf understands that, and arranged the demo for the day before High End 2012 began. 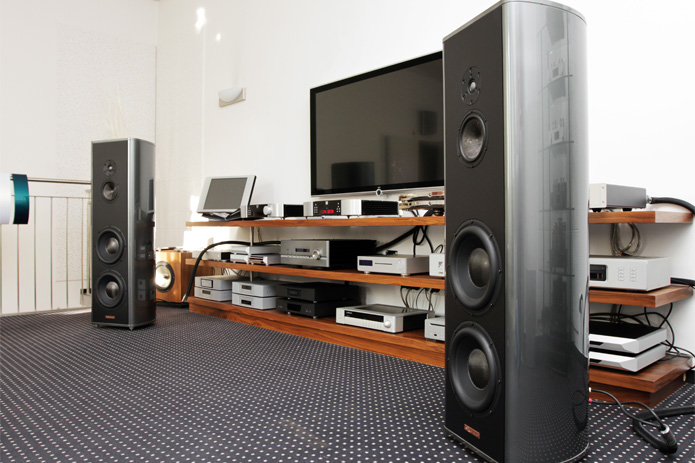 The new S5 may be one of Magico’s least expensive speakers, but that doesn’t mean it’s cheap: $28,600/pair. Yet the S5 might be something of a deal in the ultra-high end -- its sound and build are comparable with those of speakers costing much more. Magico drove the S5s in a dual-mono configuration with a pair of Devialet D-Premier integrated amplifiers, a world-class design that, at $15,995/each, is itself something of a deal. A Simaudio Moon Evolution 750D DAC-transport spun discs. Shunyata Research speaker cables connected amps to speakers, but I didn’t note what connected the 750D to the D-Premiers, or what power cords or conditioners might have been hiding behind the rack.

No Magico speaker has impressed me from the get-go the way the S5 did. It had a ballsy, bass-strong sound with a remarkably clear and detailed midrange, and highs that were extended and prominent but never fatiguing. The S5 could also play extraordinarily loudly without losing composure. Magico’s speakers have always sounded very refined, but they’ve rarely shown guts as well as impact in the bass, as the S5 did in Munich. In short, this system sounded amazing.

The final room was my favorite -- France’s Audioaéro was showing their La Source digital player connected to a prototype of their upcoming Riplay music server. Convergent Audio Technology JL-3 Signature power amplifiers and Vivid Audio Giya G3 speakers completed the system. I didn’t examine the wires and accessories all that closely, but I did spot some products from Audience: speaker cables, AC cords, and a power conditioner. Audioaéro’s Jérôme André told me that the interconnects were from US company Stealth Audio Cables. 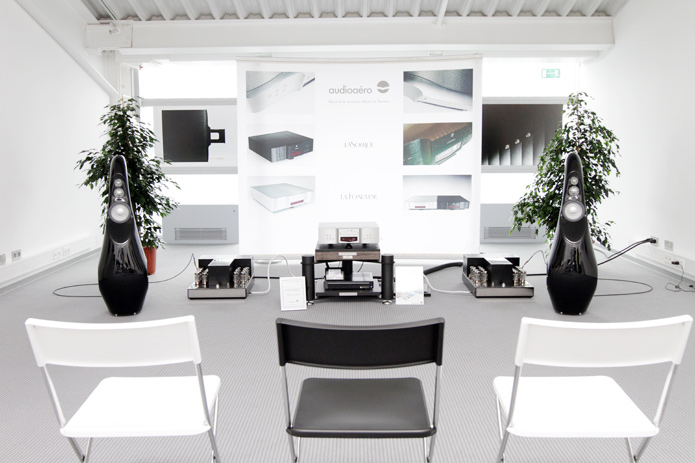 This isn’t the first time I’ve written about the Giya G3, which retails for $40,000/pair. The G3 was the best-sounding speaker I heard at CES 2012, as I wrote in this column in February; it was also the best-sounding speaker I heard in Munich. Both the Giya G3 and Giya G2 (my review of the G2 also appeared in February) have a sound that lights my fire: unflinchingly neutral and honest, unbelievably incisive and quick, and wholly capable of reproducing near-lifelike listening levels. Every recording played through them was reproduced with astonishing accuracy, and a level of realism that I have found unmatched by any other speaker on the planet -- except, perhaps, for the Giya G1. (Unfortunately, I’ve never listened long enough to that first Giya model to be able to accurately comment on its sound.)

The only place the Giya G3 fell back compared to the G2 was in the bass -- the G3 punched as hard as the G2, but didn’t go quite as deep. The good news is that the G3 isn’t supposed to; the two-thirds-the-size G3 was designed to deliver big-Giya sound in a much smaller room. It’s pretty obvious that, with their wild-looking Giya models, Vivid Audio is creating state-of-the-art transducers for every size of listening space.

I’ve often said that High End is my favorite audio show of any year. One of the reasons is Munich itself -- a wonderful place. Others are the high production quality of the High End show, and the high caliber of exhibitors -- always a diverse, plentiful group, and consistently capable of producing world-class sound worth writing about. Until next year . . .