It’s been almost a year since I last wrote in this space about computer-based audio, and I figured it’s about time to write again about that fastest-growing area of high-end audio -- just look at all the new DACs and music servers that have been introduced since last year, and the streamers I wrote about last month. The proliferation of new products hasn’t slowed, but right now there are only two things at the top of my mind: AudioQuest’s new DragonFly USB DAC and the reliability of hard drives.

AudioQuest’s Steve Silberman dropped by my place to demonstrate the DragonFly DAC and to make sure I understood how and why it was created. The DragonFly, AudioQuest’s first crack at a DAC, was conceived by the design team at AudioQuest and was designed by Gordon Rankin, whose company, Wavelength Audio, made the world’s first asynchronous USB DAC. In asynchronous operation, the DAC’s clock controls the flow of data, not the computer’s. When conceptualizing the product, the folks at AudioQuest knew that many audio enthusiasts can’t afford DACs costing thousands of dollars, and that for the casual music listener, anything over a few hundred bucks seems an absurd amount of money for getting good-quality sound out of a computer. In fact, most of those people probably wonder why they need a DAC at all. 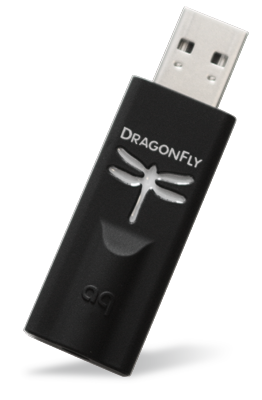 So the design goals for the DragonFly were clear: It had to be inexpensive and ultra-compact, but it also had to have audiophile features, and be Mac- and PC-compliant, USB-powered, and easy to use. The result is a $250 USB DAC that looks like a thumb drive, supports resolutions up to 24-bit/96kHz, and has a wealth of nifty features that audiophiles will like: asynchronous data transfer; dual clocks for the proper handling of 44.1, 48, 88.2, and 96kHz sampling frequencies; a sample-rate indicator (the DragonFly emblem lights up in different colors, each corresponding to one of those four acceptable incoming rates); an analog volume attenuator controlled via the operating system’s master volume control (with a regular USB DAC, the computer’s volume is attenuated digitally, which potentially reduces resolution); and the ability to drive a power amplifier directly, even over long stretches of wire, something that AQ can obviously provide. It’s the last two that make the DragonFly stand out in what’s becoming a crowded marketplace of affordable DACs. More on those features in a bit.

Given AudioQuest’s strong presence in the audiophile-cable market, the DragonFly has already created a buzz on Internet forums. But some audiophiles question the decision to limit it to 24/96 resolution when 24/192 is now commonplace for DACs. According to Silberman, AQ did so to make installation as simple as possible, and to ensure that the DragonFly was equally compatible with Macintosh and Windows operating systems -- Mac’s OS X natively supports 24/192, but Windows XP, Vista, and 7 support only up to 24/96 unless you install a third-party driver -- which AQ didn’t want consumers to have to do. So instead of making the DragonFly plug’n’play for one computer world and slightly more difficult to install for the other, they made it 24/96-capable: everyone is treated the same.

Still, some audiophiles will be disappointed that the DragonFly isn’t 24/192 compatible. To lessen that worry, I can make some more arguments against 24/192 compatibility. One is that very few recordings are now available with resolutions above 24/96, which makes 24/192 compatibility, at least for now, a feature of limited practical use. Another is the actual relevance of playback resolutions beyond 24/96. While some audiophiles argue for higher and higher resolution, thinking that more is automatically better, there has been some interesting research that suggests that while improvements can definitely be heard going from, say, 16/44.1 to 24/88.2 or 24/96, no improvements can be heard past 24/96 -- meaning that 24/176.4, 24/192, or higher are, in practice, useless. When we sponsored a computer-audio panel at Son & Image 2012 in Montreal, our entire panel of experts agreed. But I’ve also read articles in which some disagree with that assertion, and believe that improvements are audible right up to 384kHz.

I’m on the fence about this. To me, 24/192 support is nice to have, particularly if there’s even a chance that these early studies are wrong, and it’s proven that we can hear improvements past 24/96. On the other hand, compatibility past 24/96 is not a must-have item on a $250 DAC. If you want to play a 24/176.4 or 24/192 music file through the DragonFly, have your playback software simply downsample to half.

More important for me was how the DragonFly performed in my system. At first we hooked it up to the Simaudio Moon 350P preamp that I regularly use. I was pleased with how smooth, clean, and refined it sounded. That impressed but didn’t bowl me over -- I’ve heard plenty of DACs that sounded this good, although, admittedly, they’ve all cost at least a little more than the DragonFly. 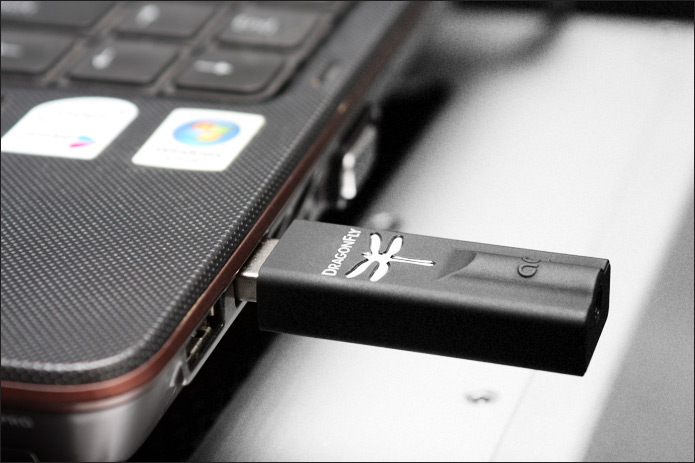 But I was taken aback when Steve Silberman convinced me to take advantage of the DragonFly’s volume control and amp-driving capability to bypass the preamp and run the DragonFly straight into my Bryston 4B SST2 power amplifier, which was still hooked up to the amazing KEF R500 speakers I’d just finished reviewing. He’d brought along a 15’-long AudioQuest cable terminated on one end with the mini-jack connector the DragonFly requires, and on the other with single-ended RCAs, so I could position the computer at my listening chair. I questioned the cable length, but Silberman assured me that the DragonFly had been designed to drive long runs -- a setup such as mine was exactly what they had in mind when they conceived the product.

Holy smokes! What a giant step forward in sound quality with this setup! The smooth, clean, refined sound I’d heard before remained, but now with a level of transparency, detail, and immediacy that running the signal through the preamp hadn’t provided. The result was a noticeable increase in resolution, image specificity, soundstage space, and realism. I’m not talking about a subtle or barely perceptible difference, such as might be provided by going from 24/96 to 24/192. I’m talking, “Wow, that’s not even close!” What had sounded merely good now sounded fantastic.

The high level of sound quality told me a few things. One was that the DragonFly is a fine-performing DAC quite capable of driving an amp through a pretty long cable. Another was that its sound, along with its rich feature set (particularly that volume control), makes it a very good value. Finally, this experience reinforced something I’ve known since the 1980s, when I began experimenting with DAC-preamps run straight into power amps: The simpler your system, the higher its sound quality can be. This shouldn’t surprise -- with many things, the simplest solution is often the best. So if getting super-high-quality sound for a rock-bottom price appeals to you and you don’t need the switching capability of a preamp, try running a DragonFly straight into a power amp. I wonder how a DragonFly run straight into active speakers might sound. Perhaps that’s something for the next installment on computer audio.

Well over a year ago, I wrote a couple of articles on the importance of backing up data on reliable hard drives. In one of those pieces I thoroughly trounced Seagate’s external drives for their unreliability, and praised Western Digital’s drives for having given me no grief whatsoever. This was based on my experience of having bought many Seagate drives and discovering that most of them were dead in the box, or failed within weeks or even days of use.

Seagate must have known that they were producing a bunch of dud drives back then, because early last year I began to see lots of new models from them that looked much better than what they’d been producing when I had all those failures. They also had features that Western Digital drives then lacked -- most notably, support for USB 3.0. But were the Seagate drives any more reliable? 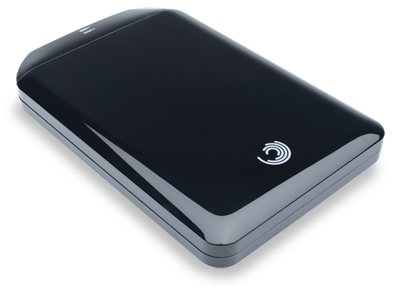 To get some firsthand experience, I started buying Seagate’s new GoFlex portable and desktop models. (This is something I first mentioned in "Computer Audio Update" and "‘Computer Audio Update’ Update" last summer.) Since then, I’ve bought more than ten Seagate drives that I use for data and music storage and for backup, and not one has failed. Seagate is no longer on my list of most-hated hard-drive makers.

In that same period I’ve also kept an eye on what Western Digital has been offering for hard drives, and though their current line of drives offers similar storage capacity and features as the Seagates for about the same money, I don’t see anything from them that compels me to switch back, now that Seagate’s reliability has improved. This goes to show you how a company can win over a customer with a marked improvement in product quality. Congrats to Seagate.

In fairness to Western Digital, I have to say that nothing has happened during that same period that would cause me not to continue to recommend their drives -- all the WD drives I’d bought during Seagate’s dark days still work fine. What it means is that I can now recommend Seagate and Western Digital drives. Having more options for safer storage is a very good thing, particularly as our music libraries continue to grow and grow.

There’s always something new to write about computer audio, so I’m going to make it a regular topic of this column. Look for the next "Computer-Audio Update" this fall.