The Blade Two may be smaller than the Blade, but it still stands almost 5’ high, and shares the same Uni-Q driver array as its bigger brother: a 1” aluminum-dome tweeter nestled in the throat of a midrange driver with a 4” cone made of an alloy of lithium, aluminum, and magnesium. Unlike KEF’s less-expensive LS50 and R-series speakers, which also use versions of the Uni-Q but have ferrite magnets, both Blades use much more powerful neodymium magnets. 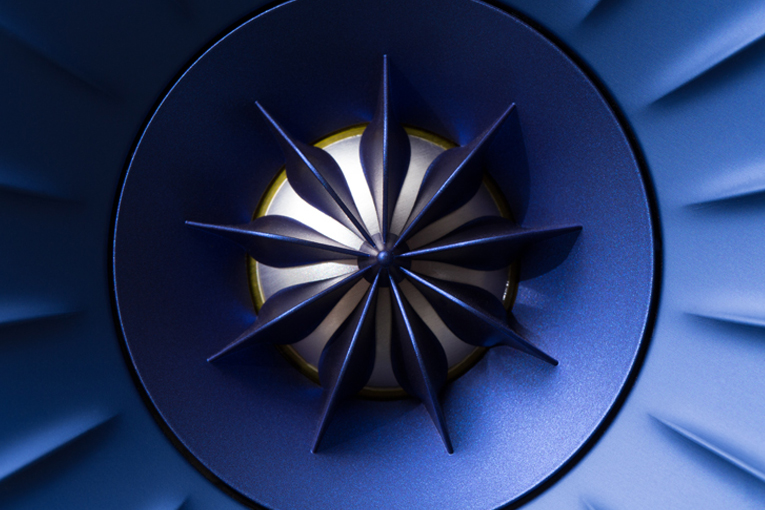 Directly in front of the Two’s tweeter is what KEF calls its “tangerine” waveguide, which helps increase the tweeter’s output and controls its directivity for frequencies above 10kHz. It also suppresses the output at the tweeter’s resonance or breakup frequency, which is just above 40kHz -- far above the audioband (20Hz-20kHz). Above and below the Uni-Q, on the speaker’s side panels, are four woofers, mounted two per side in a force-canceling arrangement. KEF claims that these can deliver bass down to 25Hz in a typical room. Indeed, Doug said in his review, “Based on what I heard, KEF’s in-room rating of 25Hz is probably true.” Since a full-range speaker is defined as one that can reproduce the entire audioband, the Blade Two gets closer to that ideal than most. (The Blade is specified down to 20Hz, which qualifies it as truly full-range.) That depth of bass is the biggest difference in the sounds of the Blade and Blade Two.

When Doug reviewed the Blade Two, he heard nothing to counter KEF’s claim for how low the speaker could go in the bass -- his pair of review samples delivered far deeper, and more powerful bass than had the Magico S5s ($29,500/pair) or the Vivid Audio Oval B1 Decades ($28,000/pair) when he’d listened to them in the same room. (The S5 and Oval B1 Decade were added to our list of Recommended Reference Components in January 2014 and June 2016, respectively.) In fact, the Twos delivered bass that was as deep, powerful, and controlled as that of any speaker he’d ever heard in his room. 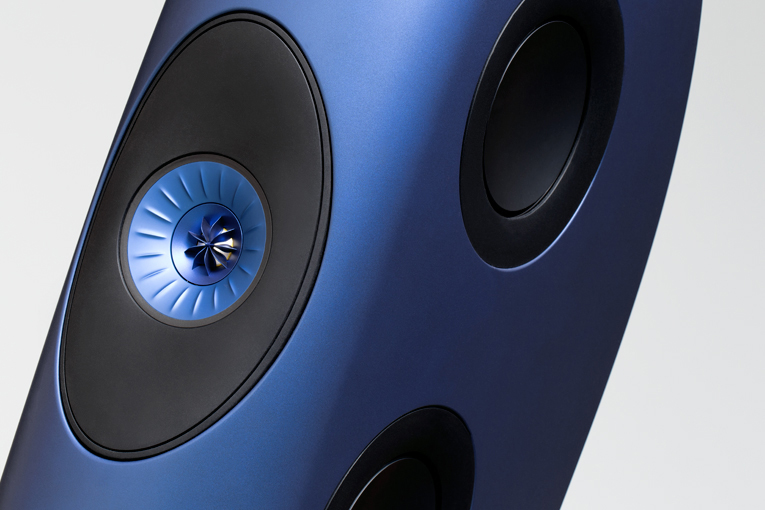 But extremely deep bass was not the Two’s only virtue -- and not the only reason that, this month, we recognize it as a Recommended Reference Component. Doug was also taken by the Twos’ soundstaging and imaging capabilities, which he found ranked among those of the best speakers available:

I cued up “Mining for Gold,” from the Cowboy Junkies’ The Trinity Session (16-bit/44.1kHz FLAC, RCA) . . . and marveled at the hugeness of the soundstage, the overall clarity and neutrality of the sound, how well focused Margo Timmins’s voice was at center stage, and the breathtaking depth of the bass. But it was with the Junkies’ cover of the Velvet Underground’s “Sweet Jane” that I was able to zero in on the Twos’ unique abilities in soundstaging and imaging. In this track, Timmins is at center stage, the lead guitar to the left, just a little behind her, and the drums to the right, much farther back. Most well-set-up speakers likewise put Timmins’s voice very solidly at center stage, and position the other instruments in the correct locations, but none I’ve reviewed has positioned the other instruments as solidly and tangibly as the Twos did -- we’re talking hyperprecise toward the sides of the stage. Furthermore, even though the drums were very far back and to the right, their aural images were as precisely drawn as that of Timmins’s voice up front and center. I haven’t heard any other pair of speakers achieve that degree of image focus across the stage with all of the instruments in this track.

Doug also found that the Two’s exceptional neutrality, near-full-range performance, and ability to play equally well from very quiet to astoundingly loud meant that it favored no type of music over other types:

With such a clean, neutral, near-full-range sound at both very low and very high volumes, the Blade Two was a sort of chameleon -- its sound depended on the type of music I threw at it, regardless of listening level. For example, for much of the time I spent writing this review, I streamed Miles Davis’s ’Round About Midnight (16/44.1 FLAC, Columbia/Legacy/Tidal) at very low volumes so that I could concentrate on my writing. Nonetheless, again and again I found myself looking up, marveling at how much detail I could hear, and how deep into the soundstage of this 1957 mono recording I could perceive.

At other times I cut loose with stuff that begs to be played really loud: orchestral music, metal, and hard rock -- particularly, when I felt like reliving my youth, rock from the late 1970s and early ’80s. Music like that just doesn’t seem right when played quietly. . . . I also often played recordings that I don’t always feel compelled to play super loud -- but I did through the Blade Twos because the speakers never sounded as if they were straining. I played all of [Adam Cohen’s] We Go Home many times at levels as loud, and sometimes louder, than those I heard at [a] Cohen concert. Katarina and Svante Henryson’s High, Low or In Between, featuring just voice and cello (24/96 FLAC, BIS), is something I often use for background listening. But I cranked up their cover of the Beatles’ “Here Comes the Sun” to ridiculously loud listening levels -- beyond lifelike, I believe -- and was amazed that the sound remained as clear and composed as it was when played at reasonable or very quiet levels. 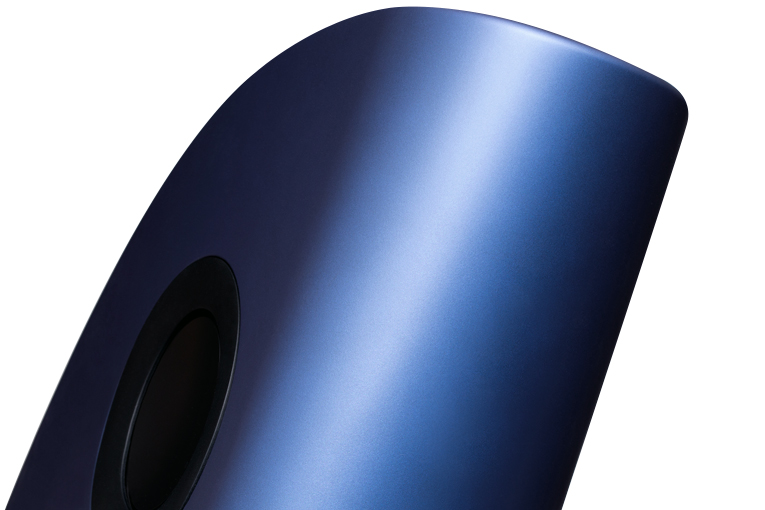 The only time Doug found the Blade Two to take a step back in performance was when he compared it directly to the Oval B1 Decade, focusing on the transition from midrange to bass:

Where the B1D stepped ahead of the Blade Two was in the integration of the lowest part of the midrange with the upper bass -- something I hadn’t noticed was a problem with the Blade Two until I directly compared the speakers. Whereas the B1D provided a seamless transition from the midrange through the bass -- it was impossible to know where one driver kicked in and the other rolled off -- I noticed a slight reduction in openness and clarity in the upper bass and lower midrange with the Two, indicating a not quite seamless blend.

But in terms of sheer bass depth and overall loudness capability, the Two stepped ahead:

When it came to depth of bass, and power throughout the bass range, the B1D’s two woofers were no match for the Blade Two’s four woofers in a much larger cabinet -- the Twos reached down to under 30Hz in my room with tremendous authority, whereas by around 40Hz the B1Ds had fallen off the cliff. The Blade Twos could also play at least a bit louder overall. 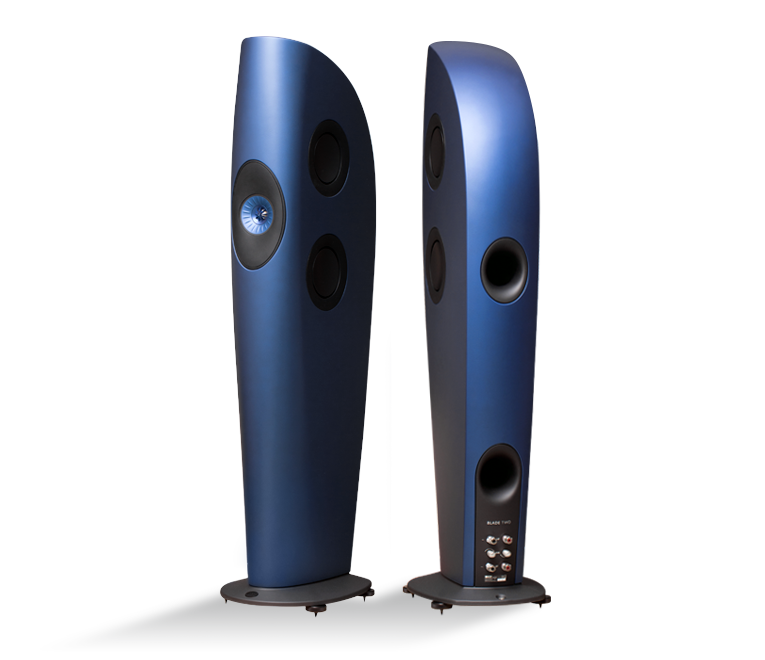 Some may see the Blade Two’s very unusual shape as being a statement more of style than of sound quality. While it’s true that the Blade received high praise for its beautiful appearance when it was released in 2011, and the Two received similar accolades on its release three years later, there’s a reason Doug Schneider said it was as exciting to listen to as to look at: Its sound quality is the equal of its appearance, which makes it an easy choice for our list of Recommended Reference Components.