Only a few years ago it was difficult, if not impossible, to find a stereo amplifier with extremely low distortion and low noise and with enough power to drive most loudspeakers and not have it cost several thousand dollars. With NAD’s recent introduction of the C 298 amplifier, which can be used as a stereo amp to deliver over 185Wpc or as a monoblock to output more than 620W (both into 8 ohms), the price for such an amp has dropped to just $1999 (all prices in USD). Evan McCosham reviewed the C 298 for this site last month.

Commensurate with the C 298’s modest price is a build quality that Evan deemed “perfectly acceptable.” The case, which measures 17.1″W × 4.75″H × 15.4″D and weighs 24.7 pounds, is mostly of metal construction, though it has a gray-colored faceplate that Evan thought is made of “a plastic-based composite.” That faceplate, as with all NAD components, is spare when it comes to styling—Evan described it as “a swath of flat, smooth gray devoid of character lines, or any style accents at all.”

On the C 298’s rear panel are more features than you’ll find on most amps at this price point. Among them are single-ended (RCA) and balanced (XLR) inputs, single-ended left- and right-channel outputs for daisy-chaining another amp, trigger input and output jacks, and switches to choose between stereo and mono operation, adjust the sensitivity of the auto-on function, and toggle between fixed and variable gain. The amp’s fixed-gain level is 28.6dB, while the variable-gain setting allows adjustment from 28.5dB down to 8.5dB by using a small attenuator knob to the right of the gain selector switch. 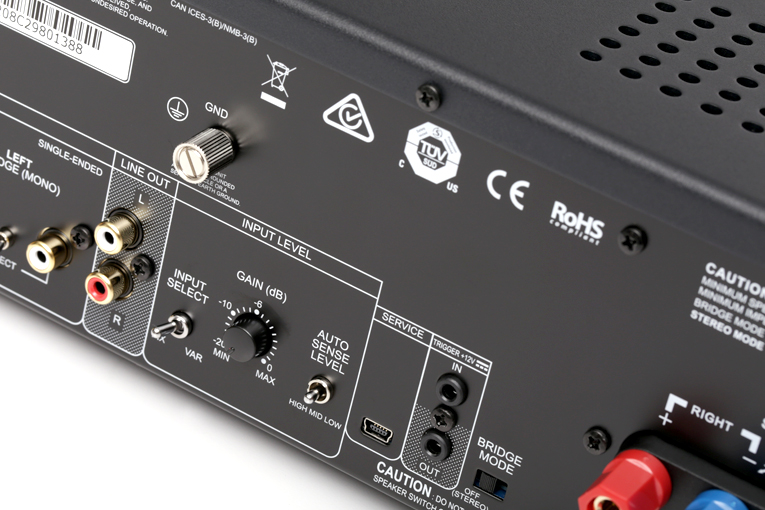 NAD’s engineers designed a switch-mode power supply for the C 298, but at the heart of its performance are two Eigentakt amplifier modules, one for each channel, which NAD builds under license from Denmark’s Purifi Audio. Eigentakt amplifier technology began as a research project for Purifi Audio, but matured into a commercial product that could be licensed to other hi-fi manufacturers, like NAD, to use in their amplifiers. The Eigentakt amp tech offers incredibly low distortion and noise within the audioband, while being able to deliver enough power to drive even low-sensitivity and/or low-impedance speakers. As a result, NAD’s specs for the C 298 are impressive—besides the output-power ratings mentioned, the total harmonic distortion (THD) is claimed to be <0.005% (20Hz to 20kHz, from 1W to 185W into 8 ohms), and the signal-to-noise ratios (SNR) are said to be >98dB for 1W and >120dB for 185W (both into 8 ohms and A-weighted). These specs and others, the company claims, rival the best amplifiers in the world, irrespective of price. Impressively, we were able to corroborate almost all of them in our measurements lab. 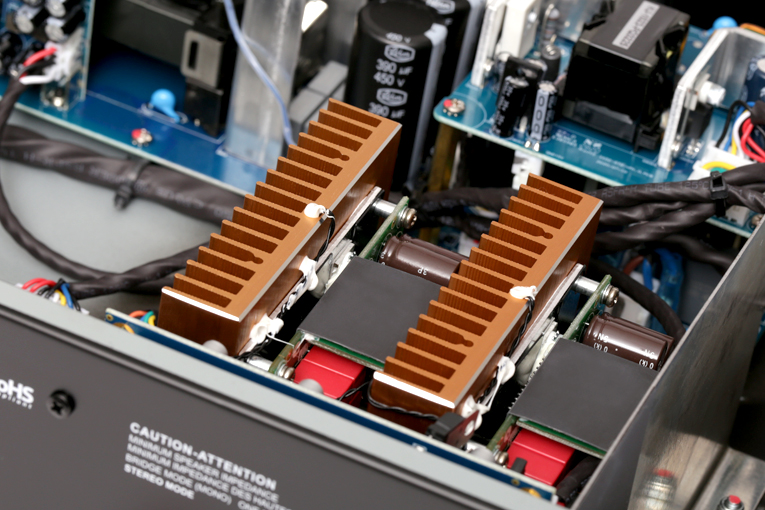 Evan slid the C 298 into his reference system, where it drove a pair of Dynaudio Contour S5.4 speakers. His reference amplifier is a Bryston 3B SST2, which is discontinued but sold for $3595 when it was available.

For his first play, Evan chose Daft Punk’s “Giorgio by Moroder,” from Random Access Memories (16-bit/44.1kHz, Columbia/Tidal), and was so taken by the bass performance that he wrote: “I was surprised because my reference amplifier, the Bryston 3B SST2, is known for bass grip, speed, and extension—for the NAD to impress me just as much is, well, impressive, given that the Bryston costs almost twice as much.” However, listening to this song and others, Evan also pointed out that the 3B SST2 consistently had greater bass “weight” than the C 298, but also added that “this was the only parameter of sound reproduction in which the NAD didn’t match up to the Bryston.” 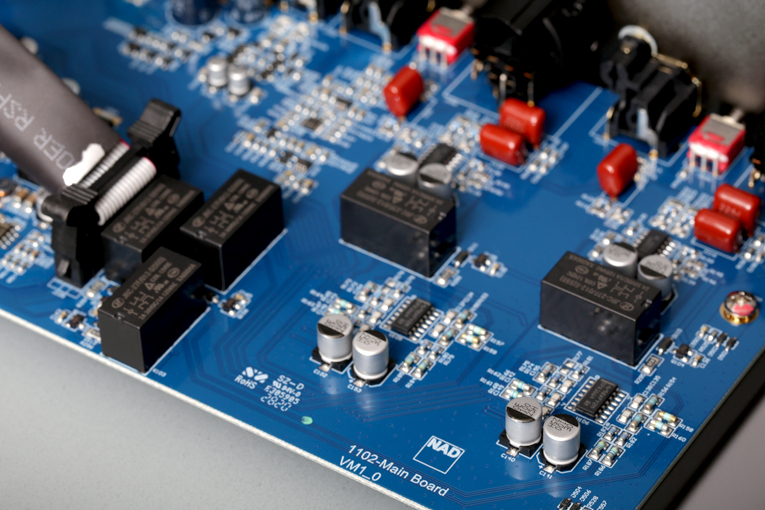 When Evan played JS Ondara’s “Lebanon,” from Tales of America (24/48 FLAC unfolded to 24/96 MQA, Verve/Tidal), through the C 298, he heard “tons of minute details” and “super-clear reproduction of Ondara’s voice,” and he was presented with soundstage images that were superior to what he was “used to hearing with the more expensive Bryston.” Playing Freya Ridings’s “Lost Without You,” from her 2019 self-titled debut album (24/44.1 FLAC unfolded to 24/88.2 MQA, Good Soldier/Tidal), Evan acknowledged that there’s some sibilance inherent to the recording, but that “the C 298 walked a fine line, giving the impression it was reproducing the sibilance actually recorded without adding any sharpness of its own to her voice.” Evan also wrote:

This track best summed up for me what the NAD did really well, and what it didn’t do quite as well as my reference amp: It presented details of the voice and piano with great ease, and its sound was relaxed without being at all lazy or slow. The reproduction of music seemed to just naturally and effortlessly happen—like a sportscar cruising at only seven-tenths of its capabilities.

And when, about 1:25 into “Lost Without You,” the heavy bass enters, I felt the C 298 indeed lacked a bit of bass weight compared to my Bryston 3B SST2. Still, the quality of the C 298’s bass, and its pace and timing, were impressively rock-solid and fast. 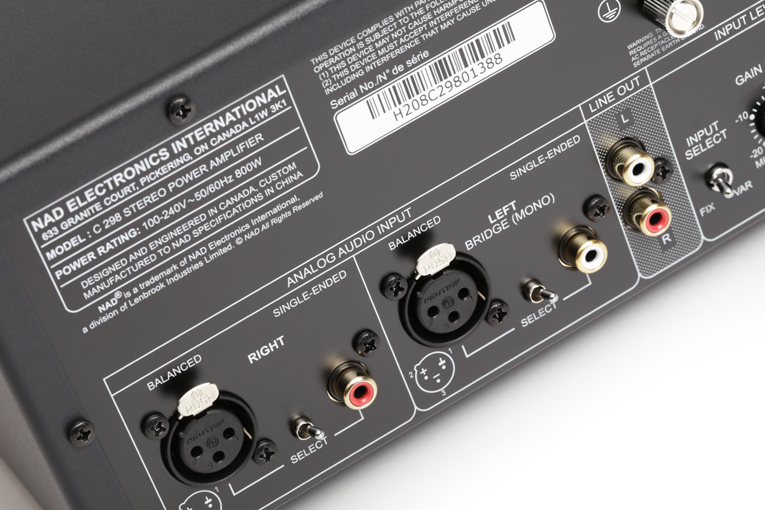 Evan also compared the C 298 to Purifi Audio’s own Eigentakt stereo amplifier, which he pointed out is “a demo version for engineers . . . not a commercial product available for purchase by consumers.” But even though consumers can’t buy a Purifi Eigentakt amp, it’s a great comparison piece and frame of reference because it was designed by the same team that designed the amplifier module in the C 298.

Evan wrote that “the sounds of these two amplifiers are cut from the same cloth—as you’d expect, given their shared amplifier technologies,” but that “the Eigentakt does everything the NAD did, and a couple of things even better.” The Eigentakt “presented more space around aural images, and offered slightly more textural and tonal detail” than the C 298. He used “These Bones,” from the Fairfield Four’s I Couldn’t Hear Nobody Pray (16/44.1 FLAC, Warner Bros./Tidal), as a musical example:

Their great a cappella singing came across as five individual sound sources firmly anchored with spaces between them, rather than a left-to-right wall of voices with less “air.” The Eigentakt also more closely approached a fully realistic vocal weight and physical presence for each singer, which is why I mentioned the textural and tonal details. But those differences of texture, detail, and reproduced spaces on the soundstage were exceedingly small. 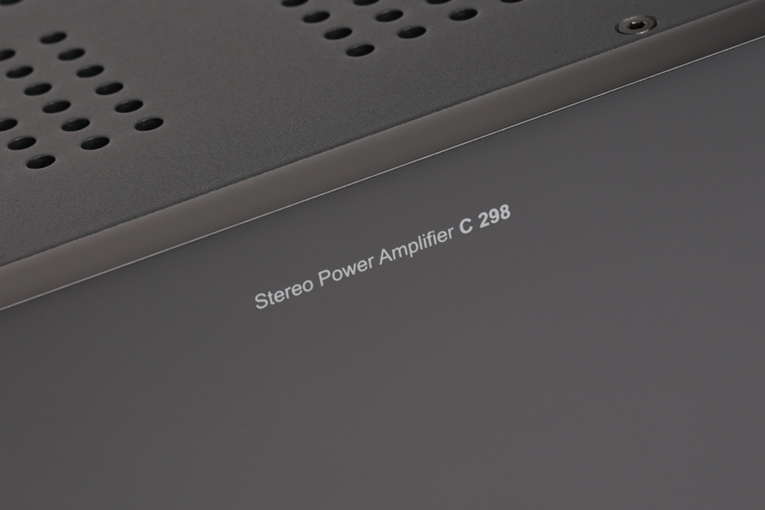 Evan’s enthusiastic review and the excellent test-bench results meant our team had no hesitation in recognizing the C 298 with a Reviewers’ Choice award when the review was published. In March, our YouTube reviewer, Jay Lee, also weighed in on the NAD C 298 with a Take 2 video review—in that video he describes the sound of the C 298 as “incredible.” Now the accolades for NAD’s C 298 continue as it becomes the latest recipient of our Recommended Reference Component award.