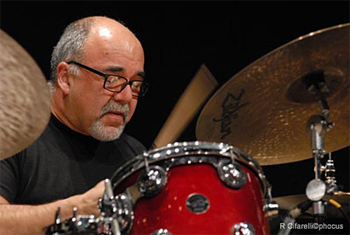 Peter Erskine has been kicking around jazz for more than 40 years -- quite an accomplishment for a guy who’s only 57. Erskine grew up in Somerset, New Jersey, near Atlantic City, and began playing drums when he was four. After study at Interlochen Arts Academy and Indiana University, he joined Stan Kenton’s band in 1972. “I met Stan at one of the early summer jazz camps he hosted in Bloomington, Indiana (1961) -- I had just turned seven,” Erskine told me in an e-mail. “Other students at that camp included Keith Jarrett, David Sanborn, Randy Brecker, Don Grolnick, Jim McNeely, and Lou Marini, Jr.”

After that summer, “Stan would invite me to sit in with the band whenever the Kenton orchestra would swing through Atlantic City. I attended the Interlochen Arts Academy for high school, where we played a lot of Kenton’s music, so when the opportunity came for me to audition, I felt ready.” Nonetheless, remembering himself as a boy at jazz camp, Erskine still finds it “remarkable to think that I would be playing the drums in his band 11 years later.”

After three years with Kenton, Erskine spent two years in Maynard Ferguson’s band. In the second of those years he appeared on Weather Report’s Mr. Gone (1978), beginning a four-year membership in that band. He also played sessions throughout the 1970s, contributing to recordings by Joe Farrell, Joe Henderson, Joni Mitchell, and George Cables. Erskine’s website includes links to his extensive discography. The titles, which cover nearly 40 years of recording, are impressive for the sheer number of sessions on which Erskine played, as well as the variety of styles.

Even more impressive than mere quantity are Erskine’s solid sense of swing, his impeccable taste, and his musicality. Whether as a leader on his own recordings or as a player for artists as different from each other as Earth, Wind & Fire, Joni Mitchell, and Wayne Shorter, Erskine never seems out of place. He’s as comfortable and unforced on pop recordings as he is on jazz. Perhaps growing up when rock’n’roll was exciting and constantly changing helped him keep an open mind, but his philosophy is embodied in this quote from the website for his own record label, Fuzzy Music: “Our name reflects our belief that whether in science, music or even in life itself, everything is a matter of degree; a continuum in which there are multi-values rather than precise delineations.”

Erskine established Fuzzy Music in 1994 as a vehicle for bringing his music to listeners who share his varied interests. “The urge to create and preserve one’s own music is a powerful one,” he told me. “And so it seemed natural to start a small albeit vanity label to channel my own recording desires. Here again, Stan [Kenton] was an inspiration. . . . [W]hen he grew dissatisfied with the bureaucracy and business model of Capitol Records, he formed his own label (Creative World).” It is ironic that, in a time of declining sales, record companies take far fewer risks on new music that could revitalize their industry. Erskine, like an increasing number of smart musicians, has taken matters into his own hands. As the Fuzzy Music website proclaims, “The artist-owned label’s time has come!” 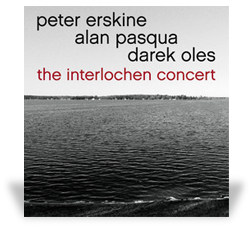 When Erskine returned to Interlochen in 2009 for a concert, pianist Alan Pasqua joined him onstage, along with bassist Darek Oles. Fuzzy Music released the resulting recording as The Interlochen Concert (CD, Fuzzy Music PEPCD019), with no overdubs or editing. Pasqua and Erskine had played there together in 1971, and although it was their first performance at their alma mater since then, they’ve played together often. “Alan is, simply, the finest musician I know,” Erskine responded when I asked about his frequent recordings with the pianist. “We’ve known each other since 1971 (when I was a 17-year-old freshman at Indiana University). He completes my musical thoughts, and vice versa . . . easily the most effortless person to play with.”

The Interlochen Concert shows how intuitively these three musicians respond to each other, and how well versed they are in jazz traditions. Jaki Byard’s “Chana” is taken at an easy but swinging pace, Erskine subtly playing ride cymbal behind Pasqua and adding an occasional accent on the snare. The trio easily pulls off “Con Alma,” Dizzy Gillespie’s complex blending of bebop and Latin jazz, without softening the tune’s edge or losing its emotional center. Jimmy Webb’s “Wichita Lineman” is a beautiful ballad; Pasqua fills it with complex harmonies that give the song a strong impressionistic feel.

Pasqua, like Erskine, has an extensive résumé that includes stints with musicians of many different styles, from rock to jazz. He has a terrific ear for harmony and a playful way with rhythm, and he and Erskine have a deep understanding of each other’s moves. Oles completes the trio with a fluid melodic style and an elastic sense of time, his tone and attack perfectly complementing the other two players. The Interlochen Concert is the work of three virtuosos who think as a unit and respond sympathetically to each other. For all the dazzling playing on the disc, no one loses sight of the music or overwhelms the mood of the song. 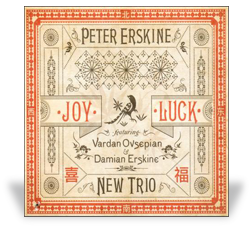 The Peter Erskine New Trio’s Joy Luck is a more contemporary-sounding jazz disc (CD, Fuzzy Music PEPCD020), with some echoes of Weather Report and Pat Metheny (though there’s no guitarist in the group). Erskine is joined by pianist and arranger Vardan Ovsepian, and by his nephew, electric bassist Damian Erskine. No need to be concerned about nepotism here -- Damian has played with a number of prominent jazz and Latin jazz musicians and is a college-level instructor. He has a full, round tone, great improvisational skill, and a solid feel for time. His electric bass gives Joy Luck a slightly brighter tone than an acoustic bass might, but it gives his solos more clarity and heft without moving the tunes away from jazz.

Ovsepian, an exciting player with a subtle sense of dynamics, writes dramatic, melodic tunes that create a strong mood and demand an attentive ear from all three players while allowing space for improvisation. His music shows the influence of his classical training, and both Erskines are alert and responsive to the dynamics of his compositions -- the rises and falls in volume and the changing complexity of the chords. Ovsepian mixes electronic and acoustic keyboards on some tunes, such as “Joy Luck Club” and “Iridescence,” to very strong effect, without letting the electronic sounds dominate. On most tunes, however, he plays acoustic piano, on which he favors full, sustained chords and an occasionally percussive attack. 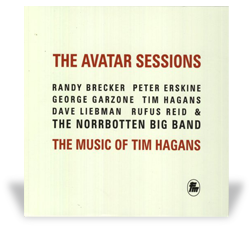 The Norrbotten Big Band’s The Avatar Sessions: The Music of Tim Hagans is a big-band recording of compositions by the trumpeter (CD, Fuzzy Music PEPCD017), and yet more proof of Erskine’s versatility. His work with Kenton and Ferguson was good training for playing in a large ensemble, which requires a more aggressive approach than drumming in a small group, but Erskine doesn’t overwhelm the music. Hagans, a fellow Kenton alum from the same time period, is Erskine’s age and has been playing jazz for about as long. He wrote all seven tunes on The Avatar Sessions, titled after the New York studio in which they were recorded. Until last year, Hagans was the artistic director of the Norrbotten Big Band, which is based in Sweden, and for whom he arranged and conducted The Avatar Sessions. The impressive list of jazz greats who appear on the disc includes Randy Brecker (trumpet), Dave Liebman (soprano sax), and Rufus Reid (bass).

The Norrbotten Big Band handles Hagans’ sophisticated charts, including their occasional sudden time changes, with ease. Hagans shows the influence of Thad Jones in “Buckeyes” and a bit of Bill Holman in “Here with Me,” while “Box of Cannoli” drops hints of both Frank Zappa and Gil Evans. The arrangements on The Avatar Sessions aren’t derivative, however. Hagans simply knows jazz history, and his time with Kenton, where he doubtless played charts by Holman and Pete Rugolo, gave him a solid foundation for his own ideas. A good example of his ability to build on tradition is “Boo,” a slice of funk that only a writer and arranger of Hagans’ generation could have conceived. The tunes give the soloists, including Hagans, plenty to chew on, and the playing of the Norrbotten band is tight throughout. 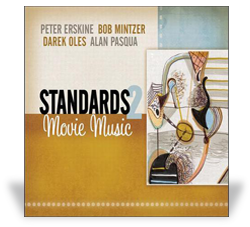 Erskine swings the band hard, but, like such great big-band drummers as Mel Lewis before him, he honors the arrangements, giving them precisely the emphasis and accents they need. In the three albums mentioned so far, as well as in the recent Standards 2: Movie Music (CD, Fuzzy Music PEPCD018), Erskine displays flawless technique without calling attention to it. He gives himself over to each composition as a whole, holding the rhythmic center but adding emphasis when needed. His solos in The Avatar Sessions, where he really cuts loose, are impressive and musical, never merely flashy, yet even non-musicians can appreciate how well constructed and smartly played they are.

Audiophiles will be pleased to learn that Erskine is as committed to good sound as he is to his playing. “The rule in improvised music is to play what you’d like to hear next,” he told me, “and that’s not a bad rule to follow when recording. How would I like this to sound? I want it to sound GOOD! I feel very fortunate to enjoy a close working relationship with engineers such as Rich Breen, James Farber, Brian Risner, and Kent Fuqua, with associate producer Dan Atkinson of the KMF Microphone Company (the stereo microphones used to record Standards 2: Movie Music). I love music with a sense of space, both sonically as well as rhythmically.”

Standards 2 beautifully conveys the dimensions of the space it was recorded in: the auditorium at the Neurosciences Institute, in La Jolla, California. The instruments ring out clearly and resonate naturally. The Interlochen Concert has a slightly more intimate feel, and the instruments are captured with tremendous accuracy and detail -- as the sound of each of Erskine’s drums rings out, its precise position in space is audible. The Avatar Sessions is a big-sounding disc, but it’s easy to hear each instrument and locate the Norrbotten Big Band’s various sections. None of the Fuzzy Music discs I’ve heard used compression or any other alteration, and they all have the warm feel of analog, although only The Avatar Sessions sounds as if it has some analog components.

For now, Fuzzy Music is solely a vehicle for the drummer’s own work: “I’m involved as a player, composer, and/or producer for every project. Signing other groups has become less important. My plates are full to overflowing with my own musical ideas and wishes.” Other musicians can envy the quality control that Peter Erskine applies to his recordings, and perhaps by playing with him can get the chance to hear how good they themselves can really sound.