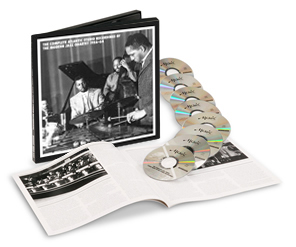 "He is, I think, the only jazz musician I have ever known with whom it is possible to schedule a nine a.m. appointment and know he will make it." That’s jazz critic Ralph Gleason, writing about John Lewis, the pianist, principal composer, and leader of the Modern Jazz Quartet. "Discipline and elegance," he went on to say, "are the key words in describing both his music and his personality." Lewis was a serious musician who wanted jazz to enjoy the same respect as classical music. Certainly jazz had its champions, but Lewis wanted that recognition to be universal. He also wanted to introduce to jazz some of classical music’s concepts of form and structure.

The breakthrough year for the Modern Jazz Quartet, also known as the MJQ, came in 1956. Atlantic Records signed the group, and during the next eight years the quartet would establish itself as a force in jazz. Mosaic Records has gathered together on seven CDs all 14 studio recordings from the group’s first association with Atlantic, which ended in 1964 (The Complete Atlantic Recordings of the Modern Jazz Quartet 1956–64, MD7-249). Nesuhi Ertegun, whose brother Ahmet had invited him to join Atlantic in order to develop the label’s jazz roster, produced the original sessions, and the larger label’s clout helped bring the MJQ to a wider audience. The albums contained in the set are the group’s most significant, and while the MJQ established its personality on Fontessa, the very first Atlantic LP, the musicians experimented widely.

The genesis of the MJQ was Dizzy Gillespie’s decision to feature four musicians from his orchestra during breaks that allowed the trumpeters to rest after playing the upper-register parts in the band’s challenging arrangements. Pianist John Lewis, vibraphonist Milt Jackson, drummer Kenny Clarke, and bassist Ray Brown began playing for Gillespie in 1946, and they recorded as the Milt Jackson Quartet in 1951 for Gillespie’s Dee Gee label and for Savoy Records. Percy Heath took over for Brown in September of that year, and by late 1952 the group was on its own as the Modern Jazz Quartet, with Lewis as its music director.

All four musicians had impressive resumes and had already worked with many key jazz musicians, including Lester Young, Charlie Parker, and Thelonious Monk. Lewis was one of the arrangers on Miles Davis’s 1949-1950 nonet sessions, which were later gathered together and titled Birth of the Cool. The Modern Jazz Quartet released several recordings for Prestige Records from 1952 through 1955. During the latter part of the group’s tenure with that label, Connie Kay replaced Clarke, who wanted a change in musical direction. With the addition of Kay, the MJQ’s lineup would remain unchanged until it folded in 1993. It had actually folded earlier, in 1974, when Jackson left the group, but reformed in 1981 with the mandate of playing concerts only half the year. 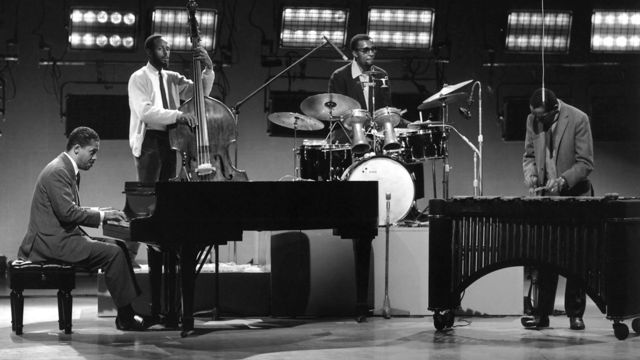 When the group recorded Fontessa, the members were a well traveled, firmly established quartet. Lewis’s note on the album jacket about the title track helped define the group’s sound and its intentions: "‘Fontessa’ is a little suite inspired by the Renaissance Commedia dell’Arte. I had particularly in mind their plays which consisted of a very sketchy plot and in which the details, the lines, etc. were improvised." Lewis invoked a much older tradition than jazz, at the same time showing that the freedom jazz represented was timeless.

One of the distinguishing characteristics of the MJQ was already present in the group’s early recordings, but was perfected by the time of Fontessa. Lewis used counterpoint, in contrast to harmony, in his arrangements. Most post-swing jazz was based on harmonically complex chords that expanded the possibilities of improvisation. With counterpoint, individual melodies crisscross and dart around each other. Doug Ramsey’s notes in the booklet for the Mosaic set describe how the MJQ used the technique: "The melody voices establish a three-way conversation as Kay’s tinkling silver and shimmering brass fill the atmosphere."

This intricate weaving of melodies is often delicate, with the notes floating freely to create seemingly accidental harmonies. The notes on Jackson’s vibraphone resonate and sustain, Kay often uses cymbals, chimes, and the triangle to create complex percussion effects, and Lewis’s piano subtly fills in the spaces, with Heath holding things down firmly on the bottom end. During the improvisational sections, the music becomes fuller while retaining the light touch so characteristic of Lewis’s arrangements. Jackson’s solos were focused and intense, with the blues as their foundation. Lewis backs him with tasteful, spare chording, and his reserved solos provide a contrast to Jackson’s.

Fontessa set the pattern for Modern Jazz Quartet recordings. Lewis wrote two tracks, Jackson one, and the remaining four were standards, including Gillespie’s "Woody ‘n’ You." Most of the group’s Atlantic recordings were a mixture of originals and interpretations of well known tunes. Two exceptions were the albums One Never Knows (No Sun in Venice), recorded in 1957, and 1962’s The Comedy. In both cases Lewis was the sole composer. The first was a soundtrack for a film by French director Roger Vadim, and the second used Commedia dell’Arte as the basis for an entire album. Critics liked the soundtrack better than Vadim’s film, but most were hostile toward The Comedy, which they felt wasn’t true to jazz. Some thought it was too structured, perhaps.

From this distance, it’s hard to hear what the fuss was about with The Comedy, which has some of the MJQ’s hardest-swinging music. Third Stream Music (1960) and The Modern Jazz Quartet and Orchestra (1961) were even bigger challenges to jazz fans, since they combined classical music and jazz. Composer-conductor Gunther Schuller, who coined the term that gave the first album its title, had a hand in both recordings. Third Stream Music includes two pieces with guests Jimmy Giuffre, Jim Hall, and Ralph Pena. Both tunes are examples of the kind of chamber jazz that the MJQ and Giuffre’s trio specialized in. The remainder of the disc uses additional instruments, including a string quartet and a chamber sextet.

Schuller wrote and conducted Third Stream Music’s one extended piece, "Conversation," as well as the "Concertino for Jazz Quartet and Orchestra" that takes up roughly half of The Modern Jazz Quartet and Orchestra. The arrangements and additional instrumentation are examples of the MJQ’s willingness to take chances, and there are some stirring passages on both records. They strike me as interesting side trips that the group took. Some of their rewarding excursions were on other albums, including a take on Ornette Coleman’s "Lonely Woman," from the album of the same name, and Collaboration (1964), a successful pairing with Brazilian guitarist Laurindo Almeida, a master of jazz and classical idioms.

Even an ardent fan of the Modern Jazz Quartet recordings might wonder if seven discs comprising over eight hours of music might be too much of a good thing. But there’s so much musical and emotional range to the group’s Atlantic recordings that to have it all in one package only deepens one’s appreciation of the quartet’s accomplishments.

Jackson was a soloist of unflagging energy and invention, and Lewis was a master of Basie-like understatement. He was also as much blues-influenced as Jackson, a fact that’s easy to overlook because the latter was such a fiery soloist. One of the most enjoyable things about the Modern Jazz Quartet’s music is hearing the ways it balanced these two different musical personalities. In terms of temperament, the other players were well suited to the group’s two dominant personalities. Connie Kay was attuned to Lewis’s ideas as a composer and arranger and avoided clichés in his playing, using cymbals in particular to strong effect. Percy Heath, who kept things rhythmically grounded, was the exiting third melody line in Lewis’s arrangements.

Michael Cuscuna produced the set, and he points out that there some anomalies that arose from difficulties in recording the vibraphone. Additional sonic problems can be explained by the condition of the original master tapes (Collaboration contains occasional distortion) or oddities in the original recording (passages on One Never Knows contain what sound like chirping crickets, which are also audible on my LP copy). Aside from these occasional problems, which don’t distract terribly from the music, Ron McMaster has done a very good job with the mastering, defining Heath’s bass much more clearly than on my LPs, which were pressed in the '70s. I also compared a 1990 CD of Pyramid (1960) to this new master, and McMaster has more clearly separated and focused the instruments, giving the drums, for example, more immediacy.

Doug Ramsey’s extensive liner notes put the sessions in historical perspective, and the large booklet contains many black-and-white photos of the group and of each individual player, although some of the individual photos are from sessions the musicians did for Blue Note. While the Modern Jazz Quartet returned to Atlantic in 1971 after recording with Apple Records, setting its first stint with Atlantic as the time frame for this set keeps the collection to a manageable length and collects the group’s most significant work.

John Lewis’s faith in how seriously jazz could be taken helped move the music from bars and clubs to concert halls. We take it for granted now that jazz musicians play with and write for symphony orchestras, and that the music of jazz composers is held in high regard. Jazz has Lewis and Duke Ellington, in large part, to thank that for the change in attitude. Ultimately, however, it’s the music in this rich collection that is Lewis’s and the Modern Jazz Quartet’s legacy. As Ramsey says in the closing words of his notes to The Complete Atlantic Recordings of the Modern Jazz Quartet 1956–64, "The rest I leave to your ears. There is much for them to discover."