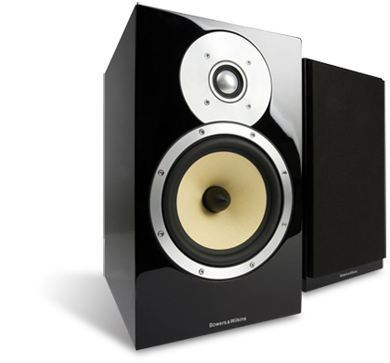 Your first pair of real speakers is like your first real girlfriend. You never forget them, and you forever cherish the gifts they gave you. Some of us fall so deeply in love with those first speakers that we promise to stay with them always: from studio to one-bedroom apartment, from two-bedroom apartment to three-bedroom house. You might even show them off at the office.

Such has been the case with my trusty pair of 303s from B&W (now branded Bowers & Wilkins, to avoid confusion with BMW). I had owned sold-separately speakers before, but the 303 was what I set my sights on when I decided to get serious about music reproduction.

When I bought a pair of them in 1998, the 303 was the bottom model in B&W’s 300 series, which has since been replaced by the 600 series, still in production. A few years ago the company introduced the CM line, designed in the UK and made in China. B&W has always been known for pouring its profits back into more research and development, and the CM models benefit from technologies trickled down from their flagship model, the 800 Diamond line -- the speaker you see next to Sir Paul McCartney when he visits Abbey Road Studios these days -- as well as the groundbreaking Nautilus.

While I’ve allowed other speakers at various prices into my home system, I always returned to those B&W 303s, for which I retained a strong sentimental attachment -- until I hooked up the CM5s. They transformed my modest source components and amplifiers in ways that, until then, I had only imagined.

I heard the CM1 ($1000 USD per pair) in a showroom just after it was introduced and thought it a honey. The CM5 ($1500/pair) is significantly larger, with better bass extension. Whereas the CM1 is the size of what’s usually called a "bookshelf" speaker, to use either it or the CM5 as anything other than a stand-mounted monitor would be to sell both models short. In fact, B&W’s dedicated stands for the CM line, the FS-700 ($400/pair), were shipped along with the CM5s, but I chose to mount the speakers on my own stands for more familiar positioning and easier comparisons.

Measuring 13.4"H x 7.9"W x 11.9"D (including grille) and weighing 19.6 pounds, the CM5 is undeniably sturdy but not cumbersome, and the build quality is beyond reproach. The speaker is offered finished in Rosenut, Wenge (a high-quality dark-brown wood), or the review samples’ high-gloss Piano Black. My wife was pleased with the way the speakers’ glossy black seamlessness matched the border of our new flat-screen TV.

The trickled-down technology alluded to earlier is found in the construction of the drivers and the bass-reflex port. The 1" aluminum-dome tweeter is tube-loaded in B&W’s trademarked Nautilus fashion, and the 6.5" bass/midrange cone is made of Kevlar, which B&W has employed to some degree since 1974. The company claims that, once a stiffening agent is introduced into its formation, a treatment with a polymer coating "seals the fibers and adds damping," to deliver cleaner sound. The look of the 6.5" cone with the grille removed is distinctive; its yellow fabric and bullet-shaped phase plug are very different from those of other speakers in or below its price range. The tweeter is equally well turned out, in silver.

B&W must like textures. In addition to the tactile midrange woofer, the proprietary Flowport technology used in the surfaces of the CM5’s port lets air move more freely across the dimpled surface. This surface, likened to that of a golf ball in flight, is claimed by B&W to "reduce turbulence" and generally improve the movement of air in and out of the port.

At 88dB, the CM5 is not overly sensitive, but at 8 ohms its impedance should present little difficulty for any but the most flea-powered amps, as was borne out by my listening sessions with solid-state amplifiers of average power.

At first I hooked up the CM5s to my reference NAD C 325BEE with 9’ lengths of Element’s Double Run cables, terminated with banana plugs. I was so impressed with that combination that I wondered what the B&Ws would do when powered by a more consumer-oriented product such as a Denon receiver, the DRA-275R, which sold in the late 1990s for around $250.

These days, my source component is primarily an 80GB iPod loaded with Apple Lossless files and mounted in an NAD iPod 2 dock. A simple Monster Cable Interlink 200 connects the dock. For the purposes of this review and for variety, I took advantage of the MP3 jack on the C 325BEE’s front panel and compared its output (via a basic Belkin patch cord) with that of Oppo Digital’s DV-970H multiformat disc player and the Monster Interlink.

Instead of B&W’s FS-700 stands, which rise to 23" without spikes, I used my own Sanus stands, which measure 20" high. I sit low and like to listen low; my stands put the CM5s’ tweeters at the desired ear level.

The CM5 is biwirable, but I did my listening with them single-wired. I also found that when I removed the speakers’ magnetically secured grilles of black fabric, the speakers sounded slightly less veiled, with greater balance across the audioband. 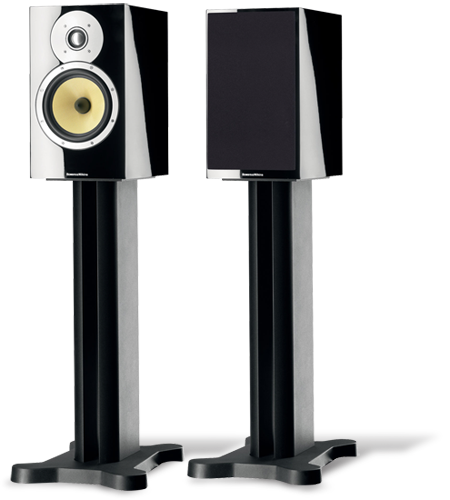 When I first hooked up the CM5s to my NAD C 325BEE, I was startled by the immediate difference in sound quality. The B&Ws were in the positions occupied by every other speaker I’ve had in this room -- about 2’ from the front wall and 4’ from the sidewalls, with a slight toe-in -- and the size of the room certainly hadn’t changed. But the amount of music that filled the space seemed much greater than before. The music sounded bigger and richer, more present, squaring off the frame rather than simply occupying it.

Greater width, yes, but also greater height and depth, as demonstrated by "Mango," from Bruce Cockburn’s Breakfast in New Orleans (CD, Rykodisc 10407). Cockburn’s voice sounded silky smooth, his guitar solo shimmered, the female backing singers were clearly delineated from his lead vocal, and swirling around it all was the liquid mwahhh of a fretless bass. Each tone occupied its own distinct level in the sonic architecture, but the CM5 integrated all of them into a beautiful whole.

"Last Night of the World," from the same CD, begins with Cockburn’s grainless acoustic guitar, followed by the entrance of a full-bodied rhythm section and the singer’s dark-tinted voice. I got the feeling that a child’s parachute had billowed up and then settled down, enveloping me in its soft, multicolored fabric.

With "Take Your Time," from Al Green’s latest, Lay It Down (CD, Blue Note 13719), the CM5 established the bedrock authority of the rhythm while allowing the voices of Green and his duet partner, Corrine Bailey Rae, to sparkle above it. This album is a deliberate attempt to capture the mellow warmth of the Al Green sound of the 1970s, and here the CM5 excelled, placing subtle but palpable emphasis on the midrange, climbing the ladder to reach the high notes in this performance, and dropping low to deliver body blows -- but always returning to a position of readiness in the middle ground.

Reproducing recordings made with acoustic instruments and voices placed front and center, the CM5s "disappeared" to let the performers come forward. The title track of Dislocation Blues (CD, Rounder 2191), a collaboration by Australian bluesman Jeff Lang and the late Chris Whitley, served up dueling, lacerating steel guitars in both sides of the soundstage, as Whitley’s hoarse voice, ravaged by lung cancer, leapt to the foreground.

Authority. Richness. Clarity. Expansiveness. Ambience. The CM5’s neatest trick was that it seemed to do all of these things, irrespective of amplification. My NAD may overachieve in its own way by delivering continuous power beyond its stated 50W, but the CM5 was able to retrieve information and reveal inner detail at very modest volumes. This is a quality not to be ignored by anyone with humble accommodations, or who may live with others who don’t appreciate the art of, say, Captain Beefheart.

On the other hand, the CM5 could crank when called on to do so. "Ain’t Cha," from Clipse’s Hell Hath No Fury (CD, Re-Up Gang 52119), is a barrage of electronic percussion and contrasting beats, all mixed very hot. The voices aren’t intended to merely jump out of the speakers: they’re meant to knock you over and keep you down until they’re through with you. The CM5 covered the dynamic range like Lionel Messi ranging across the soccer field.

Anyone who listens to a variety of music, and particularly if using an iPod’s shuffle mode, must deal with the disparity of recording levels among, for example, classic jazz from the 1950s, classic rock from the ’70s, classic rap from the ’80s, and everything recorded in this Our Age of Compression. It’s irritating, because from song to song you can find yourself adjusting the volume up, then down, then up again, just to maintain a consistent volume level. Set-and-forget just doesn’t cut it.

I expected the CM5s to respond to the NAD’s no-frills electronic reliability, and they did. Gloriously. It made me curious to hear how they would react to a well-made but solidly mid-fi receiver like the Denon DRA-275R.

The topic of how to allocate your audio budget is evergreen in this business. If you put garbage in the front end, is that what you get out? Are solid-state components essentially interchangeable? Can spending more on the speakers make up for lacks in other links in the chain? Hooking up a $1500 pair of speakers to a receiver that cost only $250 a dozen years ago is a bit irrational. In audio as in life, it makes sense to upgrade and make improvements in balance.

What the CM5s and the Denon were able to do together was startling, however. "She Wants to Move," from N.E.R.D., is a banger that begins with a dog’s short bark, and damned if I didn’t whip around as if there were a dog in the room. Prince’s "Pink Cashmere" flowed with effortless power and control, its rhythm propelled with subtle dynamic shadings. Every note of John Entwistle’s bass and Pete Townshend’s slicing rhythm guitar in "Substitute" was clearly articulated, and Keith Moon’s drumming had drama and scale, not just a vague sense of low rumble.

Coloration is a term often used as a pejorative to indicate that a designer or manufacturer has scribbled a personal or corporate sonic signature over all the music passing through a component. When coloration is introduced, it is assumed, accuracy suffers. But I don’t think there is an absolutely uncolored speaker. There are too many variables in play from design to design, and everyone does things differently. The Bowers & Wilkins CM5 sounded warm to me. Coloration has been employed in its design, but intelligently employed -- its designers, in my estimation, have tried to meet the intentions of musicians, producers, and engineers across a wide variety of musical styles. To my ears they've succeeded.

The best audio products make bad recordings sound tolerable, good recordings sound better, and great recordings sound sublime. Irrespective of source or perceived quality of amplification, the B&W CM5 did this. It made a case for spending what it takes to get the speakers you want and, if need be, scrimping on everything else.