These days, when people think of PS Audio, they think of their power products and their digital models, particularly the highly regarded DirectStream DACs. A couple of years ago, PS Audio introduced their BHK line of preamplifiers and power amplifiers designed by and named for engineer Bascom H. King, of BHK Labs, who also measures amplifiers for the SoundStage! Network. By all accounts the BHKs are great products, and range in price from $5999 USD (BHK Signature preamplifier) to $14,998 (for two BHK Signature 300 mono power amps). While not low, these prices seem fair for statement-level products, and audiophiles will be interested to know that the final voicing of the BHK Signature models was performed by King, McGowan, and the late Arnie Nudell.

Until recently, the only amplifier in PS Audio’s product line other than the BHK Signatures was the Sprout DAC-integrated ($499). PSA has now fleshed out their amplification offerings with the introduction of the mid-priced Stellar line, comprising the Gain Cell DAC-preamplifier, stereo S300 power amplifier, and the subject of this review, the Stellar M700 monoblock power amplifier. At $2998/pair, the M700 is reasonably priced for a relatively high-powered monoblock. The Stellar Gain Cell DAC and Stellar S300 two-channel power amp are also sensibly priced, at $1699 and $1499, respectively.

The PS Audio M700 has a full footprint but is slim, measuring 17”W x 2.8”H x 12”D and weighing 27 pounds. Including feet and connectors, it still measures only 3.5”H x 13”D. It doesn’t look as sexy as some amps that have recently passed through my system. For instance, NAD’s Masters Series M27 has gorgeous black and contrasting brushed aluminum casework, and both the Parasound Halo A 31 and Bryston 4B3 are massively built, with external heatsinks that look impressively, even formidably muscular.

The M700 was designed and is manufactured in PS Audio’s factory in Boulder, Colorado. The case is made of panels of relatively thick steel solidly joined with flush-mounted screws, and finished in textured black or silver paint. The PS Audio logo covers a single square pushbutton in the top left corner of the front panel; this toggles the M700 between On and Standby. When pressed, it flashes slowly for ten seconds, then glows a steady blue to indicate that the amplifier is ready and operating correctly. A fault is indicated by this light flashing quickly for five seconds, followed by the amp powering down. The main power switch is at the far left of the rear panel, directly above the IEC power inlet. Large, all-metal speaker binding posts and balanced (XLR) and unbalanced (RCA) inputs are provided, along with a DC trigger input and output.

The Stellar M700 is a hybrid: a class-A MOSFET input stage is mated to a class-D output stage. The input stage, which PS Audio calls the Analog Cell, has zero feedback, is balanced, and is claimed to mirror the sound qualities of a vacuum tube. Other amplifiers, such as NuPrime’s IDA-8 DAC-integrated ($995), which I reviewed and ended up buying, also mates a class-A preamplifier stage with a class-D power-amp stage in what NuPrime describes as “class A+D hybrid” operation. PS Audio’s own HCA-2 power amp of the early 2000s also combined a class-A input stage with a class-D output stage, which PSA called a “hybrid class-A” amp.

The M700’s class-D output stage is based on the 700AS1 module from ICEpower, a Bang & Olufsen subsidiary. PS Audio claims that their implementation of the 700AS1 module produces a minimum of 350W into 8 ohms or 700W into 4 ohms, and that it’s “stable for musical transients” into 2 ohms. PSA also says that the class-D output stage possesses “near-perfect linearity, low distortion and high efficiency.” However, ICEpower’s data sheet for the 700AS1 indicates that while it’s very efficient, with low distortion, its linearity can’t be described as “near-perfect.” PSA does concede that class-D modules don’t excel at extreme high frequencies, as borne out by the graphs provided in the data sheet. But within the audioband, the 700AS1 module’s measured performance is quite acceptable, and is what I would consider to be quite good for a class-D design. PS Audio’s Analog Cell draws its juice from an auxiliary power supply available on the ICEpower output module, and PSA has added circuitry to improve the Cell’s power-supply rejection ratio (PSRR) to a very high frequency, to improve its performance. 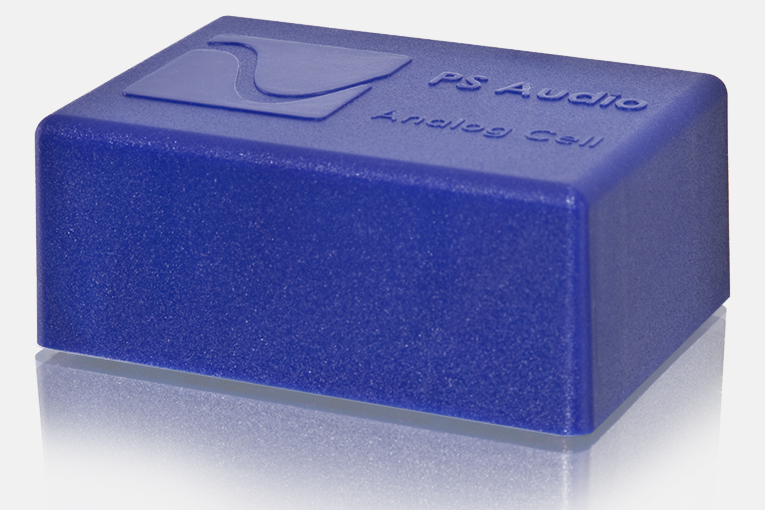 Driving MartinLogan’s Classic ESL 9 speakers, the Stellar M700s controlled each speaker’s two 8” woofers with authority, producing a nuanced and graceful sound that did full justice to the ESL 9s’ ultra-revealing midrange and highs. The scale of the percussive beats in “2049,” from Hans Zimmer and Benjamin Wallfisch’s music for the film Blade Runner 2049 (16-bit/44.1kHz FLAC, Epic), released on Epic, were . . . well, epic, with impressive slam. Throughout the album, the bass was always deep and room-filling, engendering a truly ominous mood. With more delicate tracks, such as “Rain,” the M700s revealed a gentler side, with nuanced percussive sounds nestled in an expanse of dream-like synthesizer tones. The PS Audios produced spacious, finely crafted soundstages, with good depth, that fully immersed me in this moody music.

Harry Styles’s self-titled first album (16/44.1 FLAC, Columbia), a nearly perfect pop recording, sounded thrilling through the M700s. Styles’s voice was placed solidly at the center of the soundstage, its somewhat processed and reverberant quality reproduced with a precise and expressive sound. The rhythm of the bass guitar in “Carolina” was easy to follow, flowing from the speakers with a sense of authority. Adam Cohen’s voice in “Song of Me and You,” from his more naturally recorded We Go Home (16/44.1 FLAC, Rezolute Music), was positioned slightly more forward than I’m used to, but this only enhanced its presence without detracting from the utter naturalness of his voice. With the M700s there was an ease not only with Cohen’s voice, but also with every acoustic instrument on this album, whether deftly plucked guitar or shimmering bowed strings -- the authenticity of their sounds was always impressive. 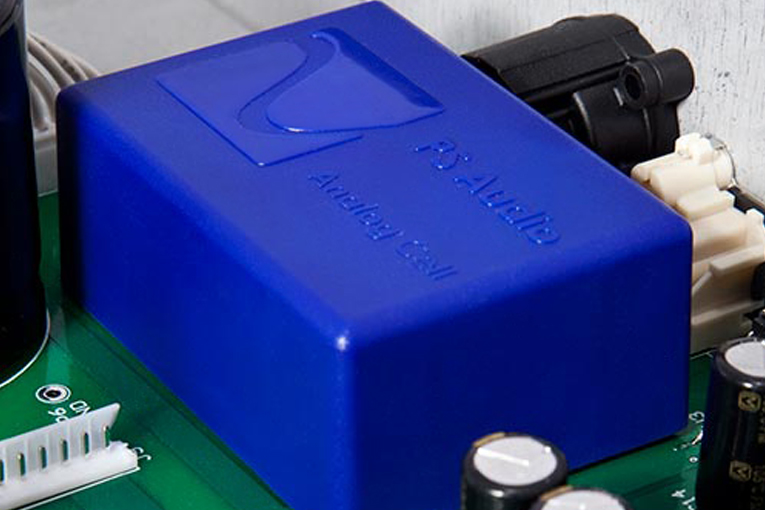 The rousing beat and the deep, spacious sound of the piano in Cohen’s “Love Is” make this one of my favorite tracks on the album -- Cohen’s voice had amazing presence through the M700s, placing him believably in my room, just slightly in front of the speakers. Good acoustic recordings can have tremendous weight, and through the M700s “Love Is” came alive, with a power and control that I had not heard before from such inexpensive amplifiers. Even some very good amplifiers, such as the Anthem MCA 525 ($3499), even though it’s specified to pump out 225Wpc into 8 ohms, can’t drive the Classic ESL 9s to truly room-filling levels with the absolute control I’m used to from my reference Anthem Statement M1 monoblocks ($6998/pair). No such problem with the Stellar M700s -- they drove the ESL 9s to any volume level I desired, and images always remained precise, with a big, coherent soundstage that was musical and engaging.

Another recent and impressive eponymous debut is Dua Lipa (16/44.1 FLAC, Warner). This great pop album showcases the singer’s talents with slick production, plenty of catchy hooks, and pounding bass. The M700s produced a huge sound with such electronic tracks as “Genesis” and “Hotter than Hell.” With more intimate acoustic recordings, such as “Thinking ’Bout You,” the M700s highlighted voices with striking immediacy and naturalness, along with the finger snaps and the purposeful strumming of the acoustic guitar. “Homesick,” a duet with Chris Martin, was a joy to listen to with the PS Audios -- the voices of both singers, though heavily processed and mixed so close together that they sometimes overlap, nonetheless were well articulated and conveyed a lot of emotion. Yet the M700s were always able to distinguish between their voices, as the gentle decays of the piano notes perfectly filled in the space around them without interfering with their expressive delivery of the lyrics. 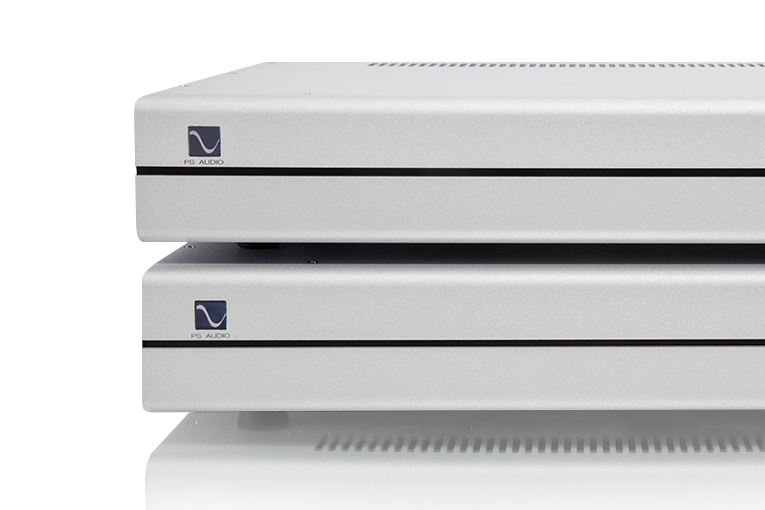 My favorite Dua Lipa recording, introduced to me by Doug Schneider, is the version of “New Rules” from her Live Acoustic EP (16/44.1 FLAC, Warner). The straightforward acoustic arrangement for piano gives her voice convincing palpability and a sense of urgency, both of which the M700 reproduced flawlessly. Lipa’s voice was a little forward on the stage, but, again, this only enhanced the sense of presence. The piano was relatively tight, and satisfyingly rich and deep. When I switched to my affordable reference multichannel amplifier, the NAD Masters Series M27 ($3999), the piano sounded tighter, but lacked some depth and slam in comparison to the M700s. The NAD’s soundstage was deeper, and Lipa’s voice was slightly farther back, closer to the plane described by the speakers’ baffles. I could also more easily hear microdetail with the NAD, such as the sounds of the piano’s pedals, and the keys in “Homesick.” This gave music a refreshingly clean, clear sound -- but the Stellar M700s were nearly as transparent, and this, combined with their touch of richness, was more musically rewarding.

The super-detailed recording of Adele’s voice in “Hello,” from her 25 (16/44.1 FLAC, XL Recordings), benefited from the Stellar M700s’ slightly more relaxed sound -- she soared without sounding etched at the high levels at which this recording begs to be played. But more than that, the control and reach of these powerful monoblocks in the lower registers of the piano grew the soundstage, and delivered smooth, solid bass throughout my room. This laid a solid foundation for the music that increased its coherence, and was entirely unexpected for a pair of monoblocks costing only $2998. 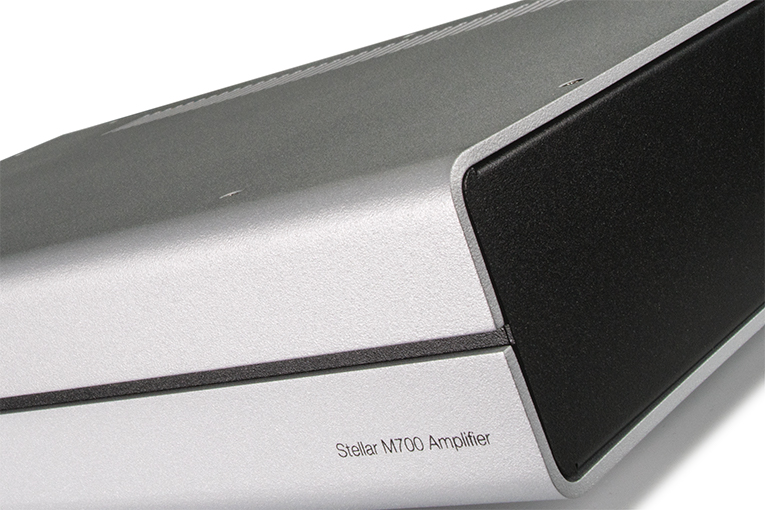 In many respects, the Stellar M700 reminded me of Parasound’s Halo A 31 three-channel amplifier ($3295). Although they’ve been around for a while, Parasound’s A series of Halo amps are still some of my favorites for their virtually perfect balance of power, fidelity, and just a touch of warmth, for prices substantially lower than most of their competition. Like Parasound’s Halos, PS Audio’s Stellar M700s should be capable of driving nearly any pair of speakers to room-filling levels while maintaining tight control over the speakers and sounding totally musical.

Don’t be fooled by the PS Audio Stellar M700’s relatively pedestrian looks. Its unassuming matte finish conceals an amazing combination of price, power, and sound quality. Considering that this monoblock puts out 350W into 8 ohms, can double its output into 4 ohms, and costs only $2998/pair, it constitutes one of the most powerful amplifiers available for the money, and should be a relative bargain for anyone looking for a robust power amplifier at a sensible price. The M700s may look innocuous, but whenever I turned them on and cranked up the music, I couldn’t help but be captivated by the quality of music they made. 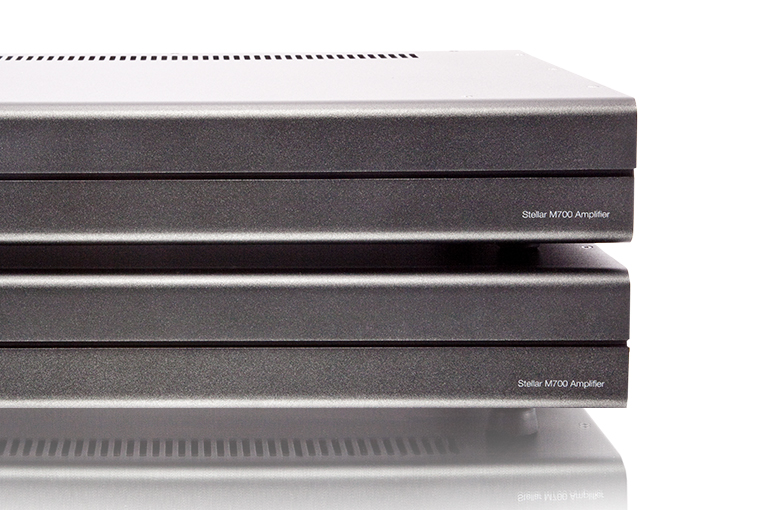 There are many excellent-sounding amplifiers in this price range, but few can put out anywhere near as much power as the Stellar M700, and most of those that do don’t sound as refined. PS Audio says that the Stellar M700 is one of the most extraordinary monoblocks ever sold for less than $5000/pair. I have to agree. The Stellar M700 is my new favorite entry-level high-end power amplifier.