In over 20 years of writing for the SoundStage! Network websites, I can’t recall our ever having reviewed a Klipsch loudspeaker (we may have -- my memory isn’t what it used to be), unless you count the Heritage Wireless Three, recently reviewed at SoundStage! Simplifi, or the headphone models reviewed on SoundStage! Solo. This is surprising, considering Klipsch’s long, rich history and excellent reputation in high-end audio circles, and their success in the budget market.

Klipsch was founded in 1946, in Hope, Arkansas, and still manufactures their high-end speaker models and professional products there. They also have a large R&D facility in Indianapolis that includes two anechoic chambers and extensive engineering and industrial-design departments. With such impressive resources, and their vast experience in speaker design and manufacture, it’s not surprising that Klipsch produces a wide range of products, from their high-end Heritage series to more budget-minded products, including architectural speakers, and now headphones and wireless lifestyle speakers. 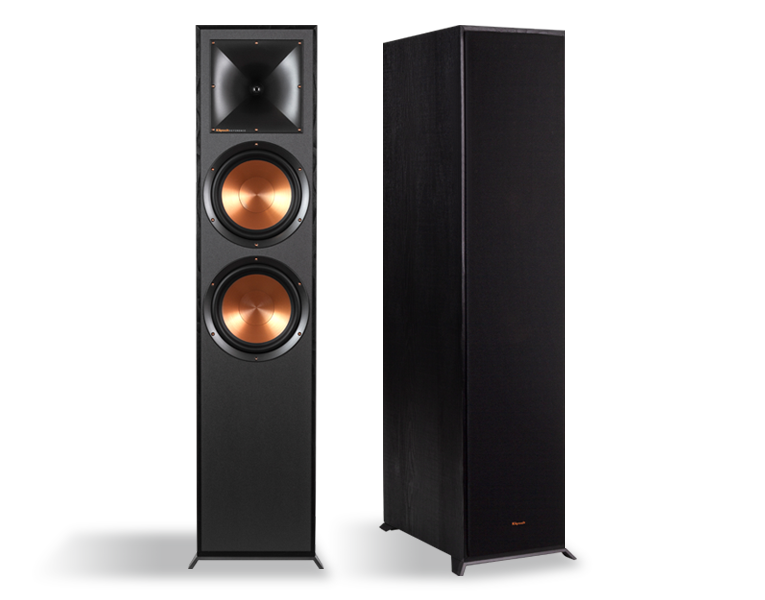 One of Klipsch’s entry-level lines is the extensive Reference series, now in its sixth generation and comprising a variety of floorstanding, bookshelf, and center- and height-channel models. There are even two Reference powered bookshelfs, and a floorstander with a built-in height-channel module. Prices start at $199 USD per pair for the smallest bookshelf model. For this review I was provided a pair of the largest Reference floorstander (it doesn’t include the height module), the R-820F ($898/pair).

The Reference R-820F isn’t one of Klipsch’s costlier Heritage line of speakers originally designed by founder Paul W. Klipsch, and whose latest iterations are still made by hand in Hope, but the familial resemblance is clear in its horn-loaded tweeter and retro styling. It’s not often that entry-level products such as the Klipsch Reference models set themselves apart from the competition while maintaining their ties to the past with their unique styling and design features.

At 43”H x 10.9”W x 17.5”D, the R-820F’s bass-reflex enclosure is big for a budget speaker. Clad in a black vinyl textured to imitate wood grain, it’s essentially a big, deep black box with sharp corner edges -- but combined with its retro-looking horn, copper-colored woofer cones with tiny but visible mounting screws, it actually looks kind of cool. Those who want svelte lifestyle speakers should look elsewhere, but Klipsch should be commended for providing a freshening-up of these classic-looking speakers. The R-820F has a 1” aluminum Linear Travel Suspension (LTS) tweeter at the center of a 90° x 90° square Tractrix horn (proprietary to Klipsch), and two 8” woofers of injection-molded graphite (IMG) covered in spun copper, with a Kapton suspension. The R-820F is a two-way speaker with the tweeter crossed over to the woofers at 1.7kHz. The speaker’s specified sensitivity of 97dB/2.83V/m and frequency response of 35Hz-21kHz, ±3dB, indicate that it should be capable of impressive output. Its claimed nominal impedance of “8 ohms Compatible” suggests that the R-820F can be easily driven by amplifiers or A/V receivers of moderate power (Klipsch’s power-handling spec is 150W continuous, 600W peak). 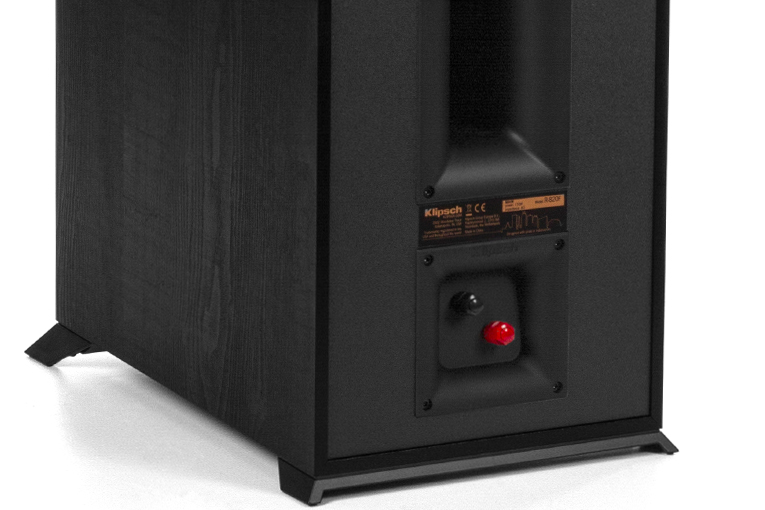 The R-820F weighs 54 pounds. Its cabinet is made of MDF -- the review samples were sturdy but, not surprisingly, not as inert as the more expensive speakers I often review. On the rear panel is a rectangular Tractrix port, and below it a single set of gold-plated binding posts. Low-profile, magnetically attached grilles are provided, but I didn’t use them. For greater stability, footers of injection-molded plastic are provided, to be screwed into the bottom panel.

Considering its reasonable price, this relatively large floorstander is built to a more-than-adequate level of quality and boasts impressive specifications, and I found its unique styling appealing. The R-820F is warranted for five years.

I used the Klipsch Reference R-820Fs mostly in my smaller system, with an Oppo Digital BDP-105 universal BD player used as both DAC and preamp, and an Axiom Audio ADA-1000 power amp. When I installed the R-820Fs in my main system, the sources were Hewlett-Packard Pavilion and Lenovo ThinkPad laptop computers running Windows 10, Roon, and foobar2000, feeding signals to an Anthem STR preamp with built-in DAC and Anthem M1 monoblocks. 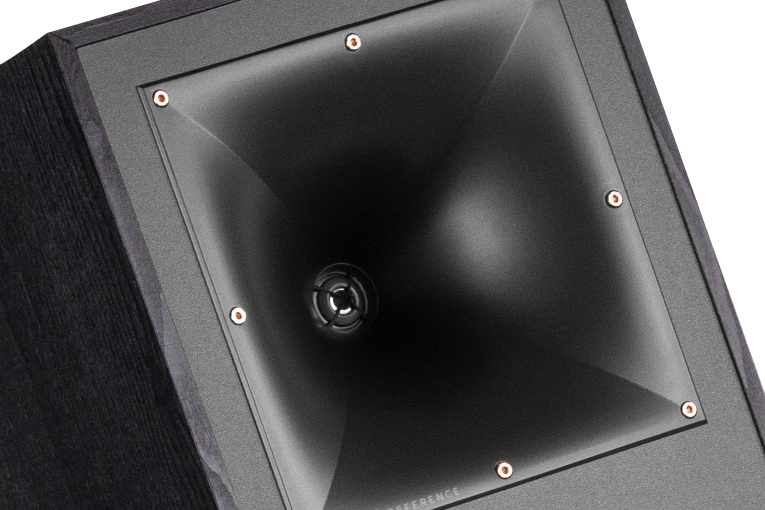 When set up in my smaller system, the R-820Fs were placed in the front corners of the room about 6’ apart, and 2’ from where the sidewalls meet the front wall with a 65” plasma display between them. Although I thought the R-820Fs in this configuration might overload the room with bass, they sounded very good, with a nice balance of frequencies throughout their range.

A penny for your thoughts

The first thing I noticed about the R-820Fs was how loud they could play without distorting the signal, and how little power they needed to do this. The Axiom ADA-1000 ($1530) is a fairly powerful amplifier specified to deliver 125W into 8 ohms, but, like all moderately priced amps, it has limits that can be revealed by most speakers and liberal use of the volume control. When I’d used the ADA-1000 to drive Paradigm’s excellent-sounding Premier 800F speakers ($1998/pair), the amp began to clip before I reached the upper limit of the volume levels at which I could comfortably listen.

Not so with the Klipsches. At very high levels that I couldn’t have long tolerated without damaging my hearing, the sound remained crystal clear, if a little forward with bass that was nonetheless exceptionally taut. The treble wasn’t quite as smooth as some might prefer, but considering this speaker’s price and overall sound quality, and how loud I was playing them with so little distortion, it would be unfair to criticize them for this minor fault. 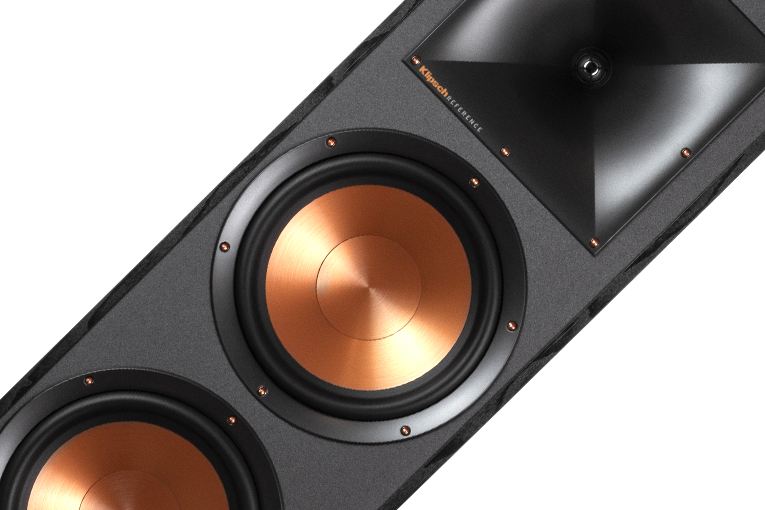 In short, these speakers could rock. The kick drum in “You Shook Me All Night Long,” from AC/DC’s Back in Black (16-bit/44.1kHz FLAC, Atlantic), hit hard and fast without hesitation, but it was the little things that were most impressive: the crispness of the hi-hat, the cymbals cutting through a mix dense with Brian Johnson’s raw singing and Angus Young’s slashing guitar. And the R-820Fs remained wholly composed at these incredibly loud levels, superbly differentiating each element of every song I played.

The voice of the late Karen Carpenter in the Carpenters’ recent With the Royal Philharmonic Orchestra (24/192 FLAC, A&M) was super smooth, as were Richard Carpenter’s new orchestral arrangements overdubbed on the original recordings. The tasteful injection of a string section, or the occasional horns, woodwinds, and harp, bring new life to the Carpenters’ classic hits of as much as half a century ago, and sounded wonderful through the Klipsches. Doug Schneider recommended this excellent recording to me, and I could have listened to it through the R-820Fs all day, so inviting and lifelike did they make Karen’s voice sound. 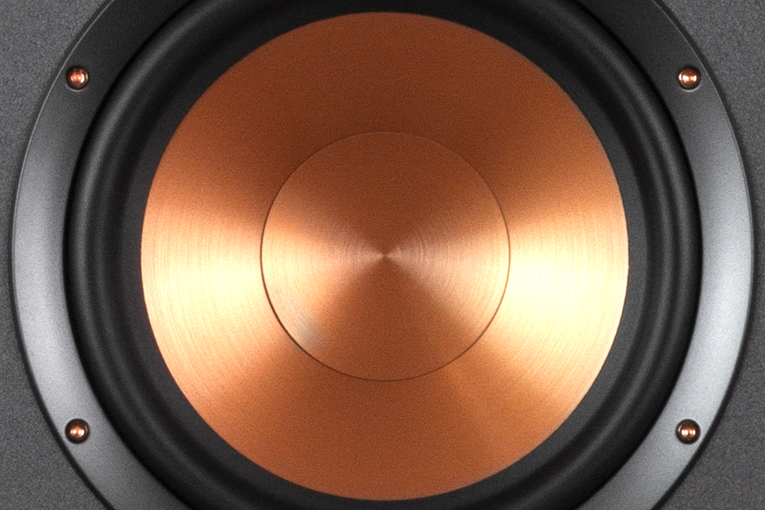 The R-820Fs spent a long time in my smaller system, where I do most of my TV watching, and I enjoyed hearing some of my favorite shows through them. Their ultraclean, slightly forward sound did an excellent job of reproducing the soundtrack of The Marvelous Mrs. Maisel. Dialogue was well defined and perfectly intelligible -- it’s an accomplishment for a pair of budget speakers to so capably reproduce a 5.1-channel soundtrack downmixed to two. The R-820Fs were also able to realistically sort out the complex sound design of the scenes in a comedy club in which Mrs. Maisel performs her stand-up set through a PA system as the crowd’s laughter and cheers provide plenty of ambiance. Music, too, features prominently in this show’s soundtrack, including many songs from the 1950s. Whether it was the great sense of scale of the big band accompanying Frank Sinatra as he crooned “In the Wee Small Hours of the Morning,” or David Bowie’s funky “Rebel Rebel” over the closing credits, the R-820Fs’ excellent sound added immensely to my enjoyment.

I mentioned that the Klipsch R-820Fs could play significantly louder than Paradigm’s Premier 800Fs, which cost more than twice as much. The Paradigms’ richer sound was ultimately more satisfying, but they couldn’t energize a big room as well as the Klipsches could. This wasn’t a problem in the smaller room in which I did most of my listening, but when I moved the R-820Fs into the bigger room in which I keep my main system, they filled it with a wall of sound bigger than that produced by any other budget speakers I’ve heard there. Jean-Michel Jarre’s Equinoxe Infinity (24/48 FLAC, Sony) sounded colossal -- the catchy percussive march of “The Opening (Movement 8)” was taut, and the synthesizer effects in “Machines Are Learning (Movement 7)” bounced back and forth between the speakers with uncanny precision of placement. Through the Premier 800Fs the soundstage of this recording was slightly more three-dimensional, but the Paradigms lacked the fast, dynamic, room-filling quality of the Klipsches. Driven by my reference electronics, the R-820Fs were capable of incredible amounts of output with little distortion, and usable output well down into the 30Hz area.

While the Paradigms couldn’t compete with the Klipsch R-820Fs in terms of sheer output, my reference amps did reveal the Premier 800Fs’ more refined midrange and highs, especially with voices. Dido’s Still On My Mind (16/44.1 FLAC, BMG) features her trademark yearning singing -- the R-820Fs placed her voice palpably and firmly between them, but it sounded a touch coarser, not as ethereal, as through the Paradigms. I couldn’t hear as much of Dido’s delicate, whispery quality in “Hurricanes,” and the acoustic-guitar notes weren’t as well demarcated. In comparison, the Paradigms conveyed more body in the sound of the piano in “Give You Up” -- its notes sounded more solid and rich, without the addition of unnatural colorations -- and made the Klipsches sound slightly leaner. 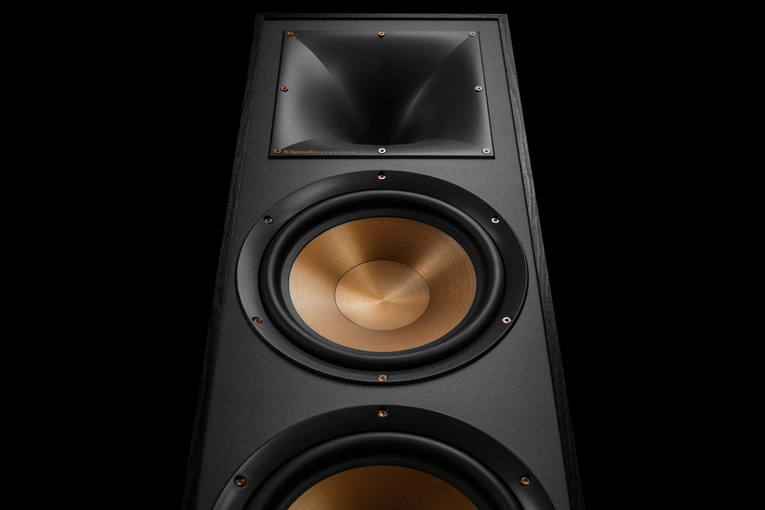 Overall, I prefer the warmer yet equally detailed sound of the twice-the-price-plus Paradigm Premier 800F, but I can’t over-emphasize my admiration of what Klipsch has accomplished in the Reference R-820F. The latter offers very good sound and, perhaps just as important, the ability to play loudly and cleanly with only modest amounts of power. At only $898/pair, the R-820F will likely be paired by most buyers with a mid-powered integrated amplifier or mid-level surround-sound receiver, uses to which I think it’s well suited. Most good speakers will sound much better when driven by a high-end amplifier, something that audio reviewers are wont to do, and I’m no exception: I drove the Reference R-820Fs with the 1000Wpc Anthem M1 monoblocks ($7000/pair). The R-820Fs sounded fantastic with the M1s, but they didn’t need anywhere near that kind of power -- they sounded similarly accomplished, and could play nearly as loud, when driven by Axiom’s far less powerful (125Wx5) and far less costly ($1530) ADA-1000.

I enjoyed my time with the Klipsch Reference R-820Fs, and think their sound quality is competitive with anything in their price range. And if you like to play your music loud, and/or pressurize a home-theater room with maximum SPLs, the R-820F might be your best bet in a pair of budget floorstanders. I like the unique styling of Klipsch’s Reference models -- their copper-colored woofers and horn-loaded tweeters set them apart from a crowded field of competitors. Kudos to Klipsch for remaining true to their heritage while providing excellent value in a reasonably priced floorstanding speaker.