What’s in a name? Well, a great deal, as any parent -- or boat owner -- will tell you. I’ve been sailing for many years, and after a while I began to discern patterns in the words posted across the transoms. One popular category honors the dire financial circumstances caused by purchasing the vessel; e.g., Loan Shark. Sentimentalists name their boats after wives, children, pets, etc. Then there’s the sort who feel it important to remind you of who they are and of who you’re not. On their vessels you’ll find such subtle appellations as Faster ’n U, Speedwagon, $$$$, or Livin’ the Dream. Trouble is, these particular owners paint themselves into a corner. Shout to the world that you’re fast, or rich, or whatever, and you’d better be!

I’ve always felt a little bit the same way about the name Micromega. Let’s see: micro = little and mega = big. Big performance in a little package? On the other hand, a company like conrad-johnson could, theoretically, build anything big, small, or anywhere in between. Heck, their name wouldn’t seem odd on the waistband of a pair of briefs! Try that with Micromega.

Micromega’s IA-180 ($2495 USD), the most powerful of the French company’s three integrated amplifiers, is claimed to produce 180Wpc into 4 ohms -- a fairly high power output for something measuring only 17.25"W x 2.75"H x 11.875"D. Not surprisingly, Micromega accomplishes this with class-D amplification, specifically a pair of Hypex UCD180HG modules, quoting distortion and signal/noise figures of <0.02% and >90dB, respectively. Hypex themselves rate this module at 180W -- but at 1% THD. According to their published data, 0.02% THD translates into something more like 40W -- which is how the amp sounded in my system. John Bevier of Audio Plus Services, which distributes Micromega products in North America, told me that the IA-180 is rated to output 90Wpc at 8 ohms. But let’s not get too bogged down in watts and distortion figures; those false idols have led us all down the wrong path in the past. Just keep in mind that the IA-180 is not the powerhouse Micromega’s published specifications make it out to be.

But one would be downright churlish to ask for more features. Besides tape playback and record, the IA-180 provides four pairs of line-level inputs -- five if you count the 1/8" RCA jack on the front panel. You can use the latter with your iPod until you save up for the optional docking station (not reviewed here), which connects via a multi-pin link. In addition, there are pre-out jacks for adding another amplifier, an A/V processor passthrough, a subwoofer output that can be slaved to the A/V processor via yet another input, allowing a passing-off of control of the sub to the AVP, depending on whether you’re listening in stereo or multichannel. The speaker terminals are of the fully insulated, Euro-approved variety, and proved fairly friendly to everything but spades. A very welcome sight was the set of moving-magnet phono inputs, which set my heart aflutter. Rounding things out on the rear panel were the main power switch, fuse compartment, and IEC connector for the removable power cord.

The front panel presents to the world a handsome if understated face, and comes in a choice of natural metal or black finish. Although the IA-180 in no way appears to be carved from a single billet of [insert favorite metal], it’s extremely well put together, its solidity more the result of good engineering rather than panel thickness. All controls are nicely turned anodized aluminum, including the smallish central volume/balance knob. To the left of this are two 1/8" jacks, one a line-level input labeled "iPod," the other the headphone jack. To the right is the display window, clearly showing volume level (in -dB) and input source, which you can label from a short list of names provided in the IA-180’s memory. Below the display, from left to right, are pushbuttons for Input Select, Monitor (for listening to tape), Mute, Headphone (which turns off the output to the speakers), and Standby. The multifunction remote control will also operate a Micromega CD player, FM tuner, and A/V processor. Unfortunately, the remote won’t control the balance, but it does turn off the display.

My time with the IA-180 was for the most part uneventful. The only quirk I experienced was a ground loop that I easily dealt with by using a cheater plug to disconnect the ground. More frustrating was the lack of shielding evidenced by the onboard phono amplifier, which was susceptible to electronic noise from the fluorescent and dimmable halogen lights in my listening room. I did my listening in the dark.

Like hybrid auto-engine technologies, class-D amplification promises greater efficiency: more work out for less energy in. When "off," the Micromega IA-180 is in standby mode and draws 12W. This is only slightly better than my NAD C 325BEE integrated amplifier, which consumes 18W in the same mode. Where class-D comes into its own is when it is actually generating soundwaves. At matched listening levels, the IA-180 drew 16W while the NAD required 37W -- nothing to sneeze at. Another benefit is that, even in the depths of a New York summer, the IA-180 never got more than slightly warm to the touch.

The Micromega was also all about slightly warm sound, and this was comforting warmth. While no detail maven, the IA-180 offered an excellent timbral balance regardless of volume level. I simply could not get this amp to sound shrill. And although bass performance in absolute terms was slighter than I would have expected given the power rating, I never felt that the bass that was there was less than engaging: nice and tight rather than rafter-shaking, which isn’t a bad compromise at all. A result was that the low, synthesizer-generated series of notes in "New Star," from Tears for Fears’ Elemental (CD, Mercury 858 499-2), didn’t bloom as dramatically as I’ve heard. Mind you, that was a synthesizer; I couldn’t find fault with the IA-180’s reproduction of music made with real, natural, unprocessed instruments.

I told you that the IA-180’s phono stage could have used a bit more shielding. I should also tell you that once I’d cleared my listening space of electronic garbage, the thing really sang. This was one of the most neutral phono stages I’ve ever heard. On The Yes Album (LP, Atlantic SD 19131), Steve Howe makes his brilliant debut creating some of rock’s most interesting and unique electric guitar sounds. Rather than overdriven sustain from solid-body Gibsons or Fenders, Howe favored acoustic and hollow-body electric guitars, firing off lightning arpeggios and favoring the upper register. This, combined with Chris Squire’s Rickenbacker bass and Bill Bruford’s higher-pitched tom-toms, can make for an aggressive, almost raucous sound through systems that homogenize disparate lyrical threads and/or favor the extremes of the audioband. As I’ve said, the IA-180 was neutral and loved the midrange. It had no problems piecing apart some of these very complex tracks. This is in no way soothing music, but neither should it make your ears bleed. The Micromega served it up just right.

A desire to turn up the volume is usually a good sign that a hi-fi system is serving the music, and the IA-180 simply begged me to do that as I grooved to Stevie Wonder gettin’ funky on "Living for the City," from his masterful Innervisions (LP, Tamla T6-326S1). I had to do a double take when I accidently came upon Lindsay Lohan singing this (as part of a medley) in the forgettable "Confessions of a Teenage Drama Queen." If you’ve heard only the Disneyfied version of this song, do yourself a favor and check out the original. It’s bad.

The good results I was experiencing spinning vinyl led me to a favorite piano concerto, Haydn’s in D Major, Hob. XVIII:11 (LP, Musical Heritage Society MHS 7027A). This 1981 recording by the Vienna Chamber Ensemble, with soloist and conductor Philippe Entremont, was clear as a bell, with a good sense of space around the notes. The IA-180 performed with a sense of ease, exhibiting none of the compression and constriction I’ve heard from lesser built-in phono stages.

The Micromega performed very well when asked to drive headphones. Keep in mind that Sennheiser ’phones tend to be easily driven due to their high impedances. Still, I’ve heard other headphone amps simply drop the ball when driving these transducers. This amp proved that a full plate of features and good sound can still go together. Hurray! 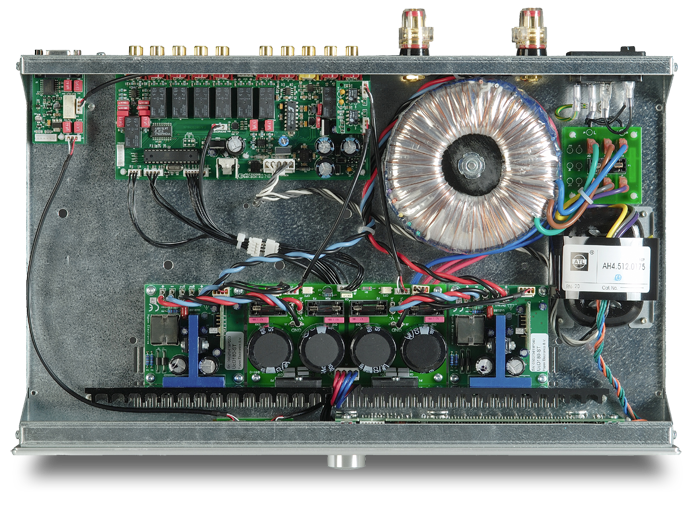 Although class-D amplification is a pretty hot commodity right now, I don’t know of a manufacturer yet ballsy enough to declare it an overall sonic improvement over traditional class-A/B (much less class-A) designs. Excuse my upturned nose and sniffing sounds, but I suspect that class-D probably has some sonic catching-up to do before the technology is wholeheartedly embraced by the high-end establishment -- and my own ears supported that suspicion when I went back to my dynamic duo of the Bellari VP129 phono stage ($199) and NAD C 325BEE integrated ($399).

Dynamics indeed! Transients, jump factor, "Wow!" factor -- whatever you want to call it, this is what well-designed, "traditional" electronics are all about, and it’s what I hear through my reference components. Played through the Bellari-NAD, the opening staccato chords of "Yours Is No Disgrace" from The Yes Album popped like firecrackers. The Haydn piano concerto also sounded more alive and fresh. Mind you, this took little away from the Micromega, which had a very satisfying, perhaps unbeatable tonal balance, was neutral, and was at least as good as the NAD at extracting detail. And the IA-180 has its own very fine phono stage. I wish to point out only that every circuit topology has its advantages and disadvantages, and if the IA-180 gave up anything, it was in the area of microdynamics -- but even then, to only a relatively small degree.

Integrated amplifiers have seen a boom in the last ten years, and if you’ve signed on to the promise of the economy of ownership they represent, there’s no better time than now to take some for test drives. True, not every audio manufacturer makes integrateds. Some have flirted with the idea, only to be pulled back into their bread-and-butter market of separates -- but I speak here mainly of US manufacturers. Could it be that the desire to build big (read: enormous) "statement" products is almost antithetical to the ethos of the integrated amplifier? You’ll never sufficiently impress those who adore big separates, at the same time you leave the traditional integrated market dismayed. I like Micromega’s approach: Pack the biggest, most accurate sound into the smallest possible box. Anyone who values quality over quantity should give the IA-180 a listen.