Note: for the full suite of measurements from the SoundStage! Audio-Electronics Lab, click this link.

Atoll Electronique was founded in France in 1997 by brothers Stéphane and Emmanuel Dubreuil, with the goal of producing “reasonably priced true high-end audio electronics” for the audiophile market. Atoll manufactures preamps, power amps, integrated amps, DACs, CD players, and music streamers. Unlike many other audio manufacturers today, Atoll has been steadfast in upholding the ideas of hand-crafting its wares in-house and sourcing parts nationally (80% of parts are made in France). What isn’t sourced in France comes from the EU, except for some specialty and custom-made parts. All Atoll products use discrete components that are hand soldered and tested throughout each phase of production; assembled products are rigorously tested before being declared ready to ship.

I had the pleasure of testing and reviewing the IN200 Signature integrated amplifier from this boutique manufacturer—a premium integrated amp, outdone only by its big brothers, the IN300 and IN400se. The IN200 comes in either silver or black. I was graced with the traditional black for this review, although the silver finish would have better matched the other equipment in my rack.

The IN200 retails for $2800 (all prices in USD)—not quite pocket change for most but still an entry-level price in the world of hi-fi. And excellent value, as I was to discover.

The IN200 measures 3.5″H × 17″W × 12″D and is simply and elegantly designed. A luxurious-looking faceplate, over a quarter-inch thick, accommodates the two large dials that control the full functionality of the unit, an LCD display, and a 1/4″ headphone jack.

On the back of the unit, the first things you will notice are the beefy, gold-plated speaker binding posts on either side. In between is an array of analog (RCA) connectors: four pairs of inputs labeled Aux, CD, Tuner, and DVD; two more sets for tape in/out; a pair of bypass inputs, which enable the amp to be used as a power amplifier (useful for home-theater applications); and, unusually, two sets of preamp outputs, which provide great flexibility—to connect subwoofers, for instance, or for biamping. The auxiliary jacks can also function as a phono input—more about that later.

The IN200 is a beast of an amp. Atoll lists it at 26.5 pounds, but somehow it feels heavier than that. Removing the hood immediately reveals what makes it so hefty: two large, German-made 340VA toroidal transformers and an array of eight 6800μF filter capacitors, custom-made for Atoll by Nippon Chemi-Con. The analog stage uses high-quality Mundorf capacitors. 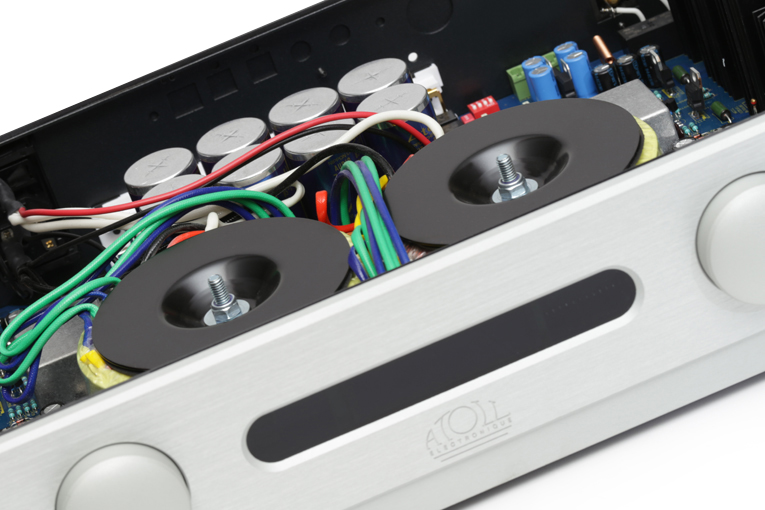 This integrated amp is a true dual-mono design. (Some manufacturers market their amps as dual monos; however, when you look inside, you see only one transformer.) The IN200 operates in class-A mode up to 40W before switching over to class AB—impressive engineering. Not many integrated amps out there do this. Officially, it churns out 120Wpc into 8 ohms or 200Wpc into 4 ohms.

Another uncommon feature of the IN200 is its modularity: expansion boards can be added to the amp to add functionality. A DAC board (DA200, $500) offers a Bluetooth receiver and digital inputs: two coax (RCA), two optical (TosLink), and one USB-B. Two phono preamplifier boards are also available (the P50, moving-magnet only, for $130; or the P100, moving-magnet/moving-coil, for $190). When either is installed, the auxiliary RCA pair becomes the phono input. A removable plate on the back of the amp covers openings for the coaxial, optical, and USB inputs of the optional DAC board. The test unit had no expansion boards installed. 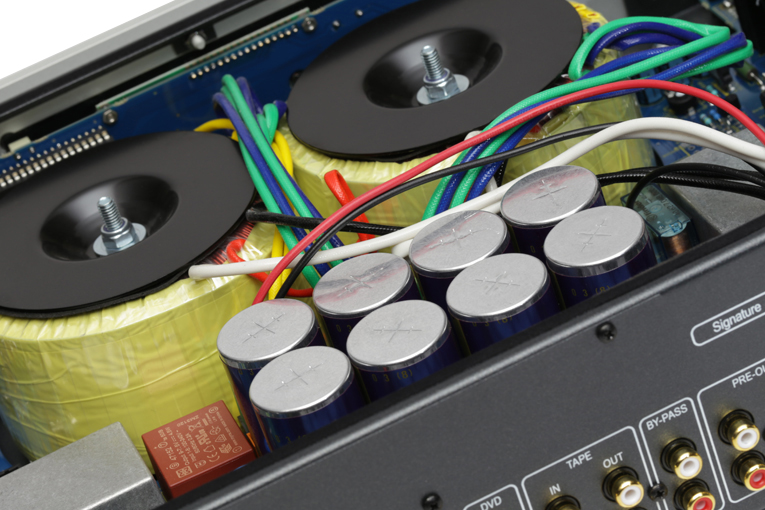 The DA200 uses the higher-end AKM AK4490 DAC chip and an XMOS XU208 USB receiver chip, allowing direct connection to a computer for streaming and playing digital files. The USB input is asynchronous.

The remote is thin, sleek, and well designed. To help keep it slim, it’s powered by two button cells—though the battery cover was a little difficult to remove. The remote works with other Atoll products, and the buttons are grouped accordingly—for DAC, tuner, CD/DVD, and integrated amp or preamp—almost like having four separate remotes combined into one.

Overall, the IN200 appears to be engineered and built to a high standard.

Setting up the Atoll 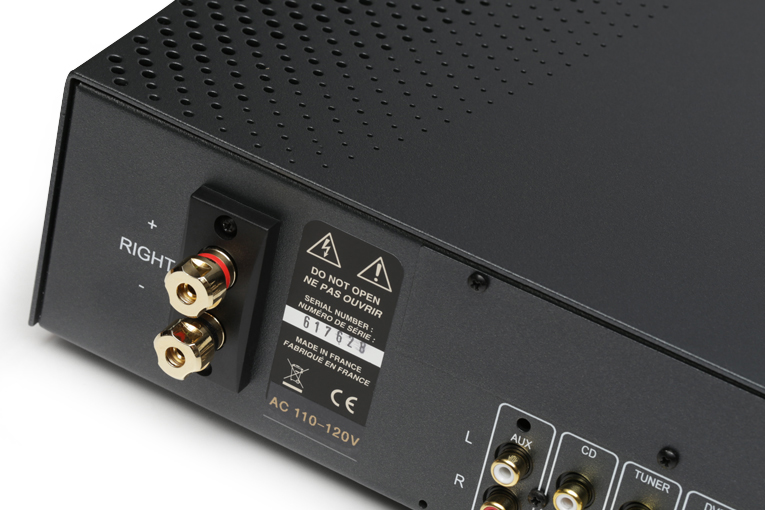 While the Revel speakers, at 90dB sensitivity, are fairly efficient, the NHTs are a sealed design with a more typical 86dB sensitivity (as specced; probably worse in the real world). But the IN200 pushed the NHTs with authority to 75dBA at a distance of 8′, with no signs of strain and plenty of gas left in the tank. I was left wondering how the power output would measure when the IN200 went through the wringer with Diego Estan, our measurement specialist.

Atoll’s US distributor, Audio Excellent, asked that I give the IN200 some break-in—a whopping 450 hours’ worth! I dutifully logged the full 450 hours before starting to jot down my impressions and easily chalked up over 500 by my final listening session. (I should send Audio Excellent my electric bill for the month!)

I began my critical listening with Dire Straits’ eponymous debut album (DSD64, Vertigo Records), which I played through the NHTs. The opening track, “Down to the Waterline,” starts after a moment of silence—at first I thought I must have selected the wrong input. I have heard this album many times before; it must have been my eager anticipation of this listening session that made this silence seem to drag out. When the music finally started with Mark Knopfler’s characteristic guitar plucks, it was immediately evident how full and powerful the IN200 sounded at low volume. 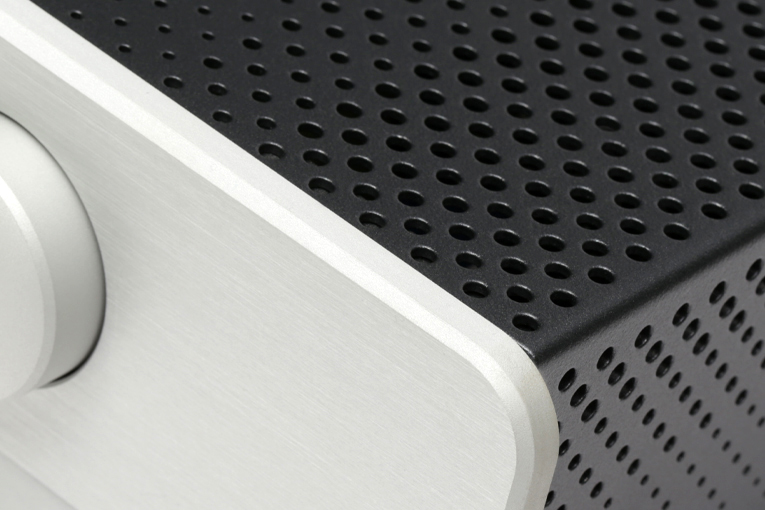 It wasn’t until the next track, “Water of Love,” that I noticed how controlled the bass was—although it was slightly thinner than I am used to. The sound overall was smooth and controlled, and the instruments and vocals were well separated. The detail and nuances that the IN200 reproduced were best demonstrated on track 4, “Six Blade Knife”; particularly at 3:11, with the sharp attack of that string pluck that starts the outro—I felt I could almost count the number of subsequent oscillations.

When I got to Norah Jones’s Little Broken Hearts (16-bit/44.1kHz FLAC, Blue Note Records), played over my Revel speakers, I noticed that the vocals appeared to be two to three feet closer than the instruments, giving an excellent sense of depth—more so than with the other albums I had listened to with the IN200 so far. On the title track, it was as if Jones were actually performing on stage, with me in a front-row seat. I’m not given to hyperbole, but I can only describe her voice as organic. The tube-like warmth of this album, which seems to have been mixed in, highlighted the smoothness of the upper- and midbass response of the IN200. 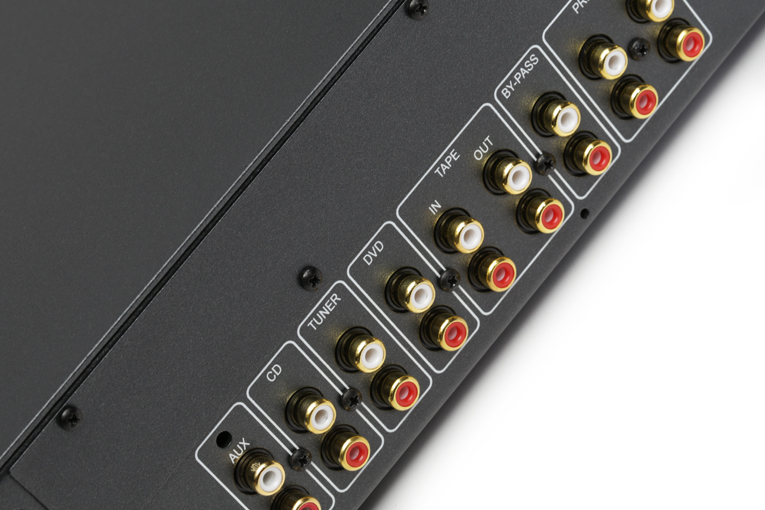 A while back, I saw an Apple commercial featuring an astronomer camping out in the dark of night, using an iPad for her celestial calculations. In the background, the title track from Sound & Color by Alabama Shakes (16/44.1 FLAC, ATO Records) was playing. I instantly became a fan of the band. This track can get a bit muddy; instruments tend to bleed into each other. But the IN200 handled it quite well. The instruments and vocals were fairly well separated on the soundstage.

According to Atoll, the IN200’s headphone jack is tied directly to the amplifier—meaning that the same amplifier that powers the speakers drives connected headphones. I decided to give the IN200 a listen with my Massdrop x Sennheiser HD 6XX headphones. I’ve always considered Ed Sheeran’s albums to be well recorded, so I fired up “Nina” from X (16/44.1 FLAC, Asylum Records UK / Amazon Music HD). The soundstage was surprisingly open (for headphones), presenting good detail and balance. The bass, though, was less than full-bodied, as you would expect from headphones. 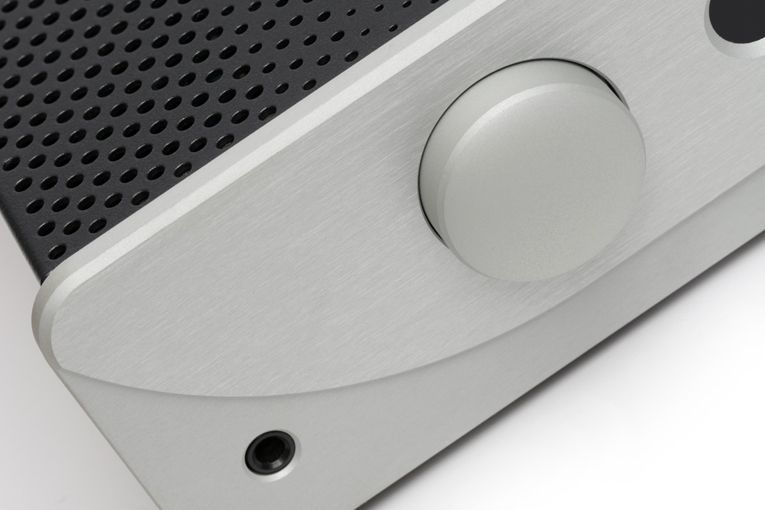 No audition is complete without jazz, of course, and Miles Davis’s spectacular Kind of Blue (DSD64, Sony Records) took the stage next. Thanks to remastering (specifically for DSD, in this case), Miles Davis’s original low-resolution recording has come to life. I listened spellbound to the entire album through my Revels. In the last track, “Flamenco Sketches,” I was particularly impressed with how finely the Atoll reproduced the softness of the piano and the delicacy of cymbals surrounding Miles’s smooth, expressive trumpet. What a great way to end this wonderful musical experience.

Unlike the excellent Cambridge Audio Azur 851A integrated amplifier ($1900 when new, but no longer in production), the IN200 has no balanced XLR input jacks. It’s not uncommon, however, for integrated amps at this price level to just have single-ended inputs. Lack of balanced input aside, the build quality of the IN200 is very high—no cheap parts like the plastic knobs on the 851A. While the 851A is also marketed as a dual-mono design, the IN200 is more so: each channel has its own transformer and rectifier (essentially, a dedicated power supply), and independent volume control, in a fully symmetrical design. The IN200’s sound was relatively neutral, whereas the 851A was on the warmer side. The IN200 also had a more open soundstage and more nuanced detail, along with richer vocal reproduction. And unlike the 851A, which got noticeably warm to the touch, the IN200 stayed cool at any volume level.

Next up, the Yamaha A-S2200 ($4499.95). Although quite similar in sound, the Yamaha was slightly more nuanced and layered, whereas the IN200 was more full-bodied. Both integrated amps were balanced and neutral. The Yamaha paired better sonically with the Revel F226Be’s, but the Atoll had more power reserves to drive the NHT C 4s. As for features, the Yamaha exceeds the IN200 in some respects—a fully balanced design, a built-in phono stage, and those gorgeous VU meters—but at a $1700 premium.

Stacked against other similarly priced integrated amps on the market today, the IN200 faces much competition: the Marantz Model 30, the Parasound Halo Hint 6, and various Rotel models, to name a few. A consideration that may be important to some is that Atoll Electronique manufactures its products domestically, in the brand’s hometown of Brécey, France, with full oversight and control of production.

I am pleased to say that a round of applause for the Dubreuil brothers’ Atoll Electronique is in order for achieving their goal of producing a reasonably priced high-end audio component. 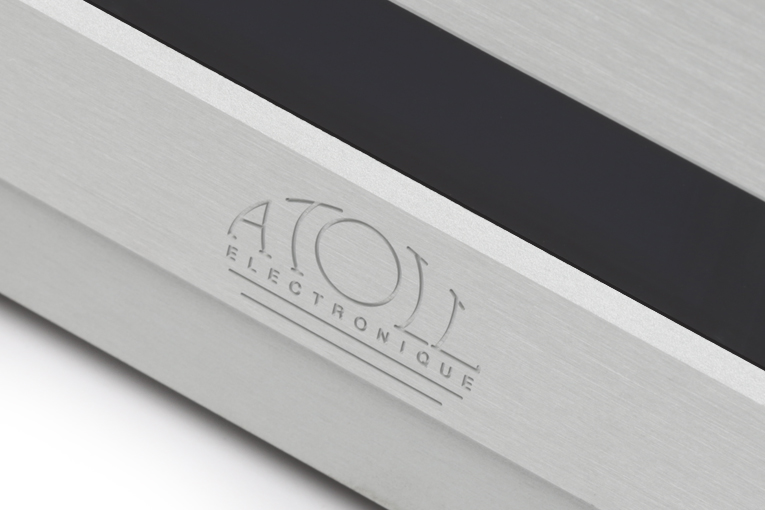 The IN200 Signature—for its engineering rigor and design, manufacturing process and quality of parts, class-A sound performance with the extra headroom of class AB, command of hard-to-drive speakers, availability of DAC and phono-stage expansion boards, and compact footprint—is absolutely worthy of your consideration.

Note: for the full suite of measurements from the SoundStage! Audio-Electronics Lab, click this link.