It’s been wonderful to watch the rise of the integrated amplifier. Long gone are the days when they were thought to be mere compromises; many of today’s integrated amplifiers are legitimate hi-fi contenders. Their benefits are many: shorter signal paths, better matching of preamplifier and power-amplifier stages, and, usually, a considerably lower cost than separate components. And never before have there been so many high-quality choices. The past decade has seen a flood of options -- it seems that every audio company is making an integrated.

But in my opinion, only a few of these manufacturers -- e.g., Simaudio, Gryphon, Marantz, Classé, Boulder -- take full advantage of what an integrated amplifier can offer. While their products aren’t cheap, they sound excellent; these firms deserve respect for making the integrated amp a force to be reckoned with.

Leema Electro Acoustics may not be well known in North America, but this UK-based company makes some outstanding hi-fi products. One of their latest integrated amplifiers, the Tucana II ($4777 USD), is the subject of this review.

The first thing that caught my attention was the Tucana II’s weight: a whopping 40 pounds. This caught me off guard, because this integrated isn’t very big -- only 17.2"W x 4.3"H x 12.5"D. My review sample came in a beautiful matte-black finish (silver is available). On the rear panel are one pair of balanced inputs (XLR), six pairs of single-ended inputs (RCA), a set of preamp outputs, a tape input and output, and two pairs of high-quality, gold-plated binding posts. On the left of the front panel is a large rotary volume knob, and elsewhere on the faceplate are buttons for controlling the gain, balance, mute, and tape. Leema has also included an AV Direct button -- really helpful if you want to install the Tucana II in a home-theater system. My only complaint is about the remote control. I expected something of high quality, but the Tucana II’s remote feels like a cheap afterthought.

When I removed the Tucana II’s cover, I saw that it’s been designed for serious audiophiles. The microprocessor-controlled preamp section uses Burr-Brown attenuators that are fed a buffered signal from OP275 operational amplifiers (op-amps). The signal is then sent to dual-mono class-B amplifiers and buffered preamp outputs. The preamp section has its own power supply, to completely separate it from the power-amp section. In addition, input selection for the Tucana II uses relays with gold-over-silver contacts that are controlled by a microprocessor, to reduce any chance of compromising the signal integrity.

The power amp’s left and right channels are completely separate from each other; each has its own power transformer, rectifiers, and reservoir capacitors. The Tucana II is a class-A/B design. Leema Acoustics explains: “Each output stage uses a class-A driver stage and has three pairs of very high-performance, hand-matched ThermalTrak output transistors.” Leema says that these transistors eliminate thermal distortion.

The Tucana II is specified to output 148Wpc into 8 ohms or 285W into 4 ohms. Leema claims that it can produce an output current of greater than 50A and is stable down to 2 ohms. Fifty amperes is serious power, especially for so compact a component.

After inserting the Tucana II in my system and letting it burn in for about 200 hours, the first thing I noticed about its sound was its transparency. The Tucana II was very true to the source. It wasn’t overdetailed, like some components, and perhaps it didn’t mine every detail from every recording, as the best separates do; nonetheless, I never got the sense that I was missing much. The second thing that stood out was the amount of power the Leema had at its disposal. When I cranked it up, it just got louder: Everything grew in scale, there was no congestion, and the sound never got brittle or harsh. Bass notes were authoritative at any volume. Such ample power made the Tucana II sound very good with rock, metal, and pop music, but those who prefer other genres shouldn’t fret -- the Leema sounded just as good with every other type of music, and at any volume.

Listening to “No Air,” from Jordin Sparks’ self-titled album (CD, Jive B000WQ9U9Y), gave me a good sense of the Tucana II’s sound. Her voice in this track sounded quite natural, with good presence and detail. The Leema was tonally quite evenhanded, not emphasizing any part of the audioband, and its very open, clean midrange made the overall sound very transparent -- and the amount of low-level detail I could hear made it clear that the level of distortion was very low. The bass notes in “No Air” had good weight and physical impact: the Leema’s articulate and well-defined reproduction of the sounds of percussion instruments gave this integrated an amazing ability to keep tempo correctly balanced. 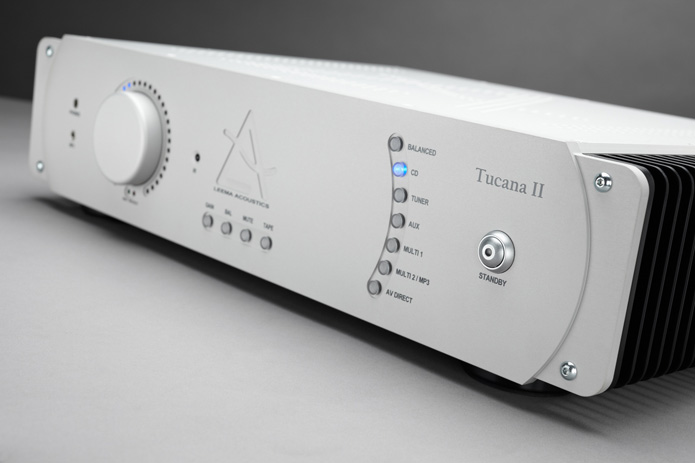 I switched gears and tossed on “Watch This Dave,” from Slash’s R&FNR (CD, Dik Hayd B0039OGGVQ). Slash has said that his guitar playing has gotten better, and based on this track alone, I would agree -- he kills on “Watch This Dave,” making his Gibson Les Paul really sing. Through the Tucana II, the high notes were smooth and nonfatiguing without sounding rolled off. The cymbal in this track was also clearly defined -- each time it was struck, the sound decayed very naturally in my room. This, and the Tucana II’s overall high-frequency purity, made this track sound very realistic.

With “Hells Bells,” from AC/DC’s Back in Black (CD, Epic 80207), the Tucana II proved that it was very good at re-creating massive performance scale, perhaps because of its high power delivery. But while the Tucana II could sound quite powerful, it could also sound soft and delicate when needed -- it had the uncanny ability of being able to transport me to the recording venue, whether a small, intimate session, or one of AC/DC’s grand rock fests. And “Hells Bells” was handled with poise and power. The Tucana II ate this track for lunch, re-creating that pumping-adrenaline feeling I get at a good rock concert. In my experience, this is something that can be done by only an integrated amplifier or high-quality separates with more than 100Wpc to burn. Anything less powerful, in my experience, can’t compare, unless hooked up to very sensitive speakers. But, sensitive speakers or not, the Tucana II had enough reserves of power to handle difficult loads with ease. I never got the sense that that it was running out of power at any volume setting, and it didn’t break a sweat -- it never got more than just warm, even when I’d run it for hours at high SPLs. That beefy power supply paid off in spades.

I compared the Leema Tucana II with my own Peachtree Audio Nova integrated amplifier ($1199). Though these products are hardly in the same price category -- the Leema costs several times as much as the Peachtree -- they nonetheless made for a useful comparison: While the Tucana II is very good, it lacks some of the Nova’s positive characteristics.

The Nova was a bit better at capturing the natural timbres of instruments, and its overall sound with voices was more organic and timbrally realistic. This isn’t to say that the Tucana II didn’t sound natural or realistic -- it certainly made the Jordin Sparks track sound quite full -- only that the Nova sounded more tonally complete.

The Tucana II made up for this with its superior transparency. When it came to just letting the music through, the Nova wasn’t on the same level as the Tucana II. With the Leema I could hear more deeply into recordings, and therefore hear more of the artists’ intent. In terms of sheer power, there was no comparison. The 148Wpc Tucana II exerted firm control over the speaker drivers; the 80Wpc Nova’s grip was a bit looser. And the Leema’s first-rate bass capabilities made its overall sound very energetic and rhythmic.

The two integrateds’ midrange and high frequencies were very similar, but I could hear that the Tucana II produced a lower level of distortion. The Nova made up for this with its more organic, more tonally rich sound.

The Nova and Tucana II are both extremely good integrated amplifiers; they differ in the ways they reproduce sound. Your choice will be based on which sort of sound you prefer and how much money you want to spend. If you’re looking for a high-quality integrated amplifier, both are worthy of your consideration.

Leema Electro Acoustics has done a really good job with the Tucana II. It’s a first-class component whose performance approaches that of some of the best integrated amplifiers out there. Such performance, however, comes at a price: $4777. But if you can afford it, and if you value ample power, excellent transparency, and clean sound across the audioband, then I highly recommend you listen to the Tucana II.