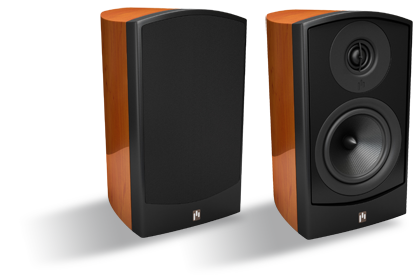 It used to be that when a reviewer was about to receive a $598 pair of speakers, certain things could be counted on. The speakers would likely be available only in a semigloss finish of faux black ash, and be equipped with grilles that attached with pegs, and basic plastic binding posts -- maybe even spring-loaded terminals that could accept only bare wire. In many cases the drivers would be nothing special, made of materials ranging from polypropylene to paper.

Times have changed, and Exhibit A for the altered state of affairs is Aperion Audio’s Verus Grand Bookshelf ($299 USD each). On opening their box, I was first struck by the fact that each speaker was wrapped in a velvety bag. Lifting one out, I was impressed with its heft. And when I removed the first speaker from its bag, I was floored by the quality of its finish. Had Jeff Fritz not already gone on record as being stunned by the "gorgeous" look of Aperion's Verus Grand Tower speaker, I might have assumed I’d been sent a far more expensive model.

The Bookshelf, the second smallest speaker in the Verus Grand family, measures a compact 13"H x 7.5"W x 9"D and weighs 14 pounds. Like its brethren, the two-way Bookshelf can be ordered in a finish of High Gloss Black or, in the case of the review samples, a real-wood veneer of Medium Cherry. I could have used my reflection in the review samples to shave -- in the years I’ve been reviewing, I’ve never seen this quality of finish on a speaker costing less than $2000/pair. The level of fit, too, is remarkable for the price. Try as I might, I could not find a seam where pieces of veneer met. If I didn’t know better, I’d say that the Bookshelf’s cabinet was carved from a solid block of wood. And solid it was, at least when I gave it the old knuckle-rap test. Any sound of hollowness was notable by its absence; all I got from repeated raps on the Bookshelfs was sore knuckles. The sense of quality of build was reinforced by the grille, which is held in place with magnets, and by the two sets of sturdy gold-plated binding posts on the rear panel. 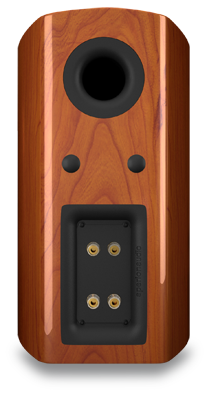 The Verus Grand Bookshelf’s claimed sensitivity is 87dB/W/m, and the speaker is recommended for use with amplifiers offering from 30 to 200Wpc. The stated impedance is an easy-to-live-with 6 ohms. The drive-units that present that 6-ohm load are a 5" woven-Kevlar midrange-woofer with an aluminum phase plug and Aperion’s Axially Stabilized Radiator (ASR) 1" silk-dome tweeter, which the company says reproduces lower frequencies than other tweeters. This allows the crossover frequency to be set lower for better mating with the midrange-woofer. Aperion states the frequency response as 59Hz-20kHz, ±3dB, the Bookshelf’s bottom-end output being assisted by a rear port; the cabinet is made rigid with internal bracing.

The speaker’s ten-year warranty is twice the industry standard, and should give the potential customer considerable confidence in this Internet-direct seller.

The Verus Grand Bookshelf is the first, well, bookshelf speaker I’ve reviewed in quite a while; I had to lug my 60-pound, 24"-high speaker stands, filled with sand and lead, from the garage to my second-floor listening room, where I affixed the Aperions to them with Blu-Tack. I ultimately found that the Bookshelfs sounded best when toed in so that the tweeter axes converged just a few feet behind my head. The speakers were placed about 3’ 6" out from the front wall and about 2’ away from sidewalls. Aperion’s claim of a sensitivity of 87dB seemed reasonable; it took a bit of power to wake up the Bookshelfs. While Aperion recommends at least 30W of amplification, I might want to take advantage of Aperion’s 30-day in-home trial if my amp put out less than 50Wpc, just to be sure the speakers could produce the volume levels I wanted.

The Verus Grand Bookshelf was one of those little speakers that had me looking up from time to time to make sure it hadn’t somehow grown an extra woofer. When the Andrew Read Trio’s "Flat Five Blues," from their album J.S.B. (24/96 FLAC, Linn Records), came shooting out of the diminutive Aperions, I did an involuntary double take and thought How’d they do that? Read’s double bass sounded plump and bouncy as it drove along the beat, accompanied by Erik Poortermann’s brushed snare and tom-tom whacks, which were similarly fleshy and sharply defined. Hans Kwakkernaat’s piano, which he plays mainly in the higher registers on this track, was well served by Aperion’s ASR tweeter, which didn’t seem to know how to do harsh.

The same excellent sound could be had with violins and classical guitar. Through the Aperion’s nonfatiguing tweeter I could listen all day long to string- and guitar-heavy tracks such as the first movement of Rodrigo’s Concierto di Aranjuez, with guitarist Marlon Titre accompanied by Antony Hermus leading the Anhaltische Philharmonie Dessau, on España (24/192 FLAC, Linn Records). When Aperion claims "authentic and crystalline tones" for their ASR tweeter, they aren’t exaggerating. That’s what I heard. 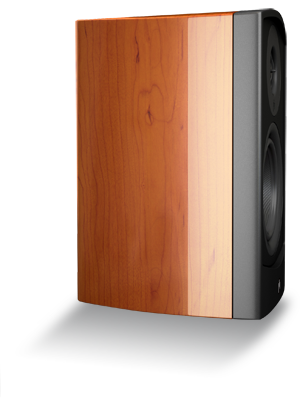 With rock, the Verus Grand Bookshelf continued to impress. The voice of Scottish singing sensation Maeve O’Boyle combines all the virtues of Janis Joplin, Melissa Etheridge, k.d. lang, and Dolores O’Riordan with a subtle Scottish twang that is to die for. O’Boyle’s songs are described by her label, Linn Records, as "poignant, personal, and deeply meaningful." They are also sung, played, and produced with aplomb. O’Boyle’s All My Sins (24/88.2 FLAC, Linn Records) is a smash debut in heavy rotation in my listening room, and sounds big, clean, and lively through my reference Definitive Technology Mythos ST speakers. While the much smaller Bookshelf can’t match the bass and dynamic output of the Mythos ST, at normal listening volumes it (quite remarkably) never left me feeling I was missing much of this recording’s bass or midrange. And as for the treble, I found myself wondering if I could graft the ASRs onto my Mythoses. What an intoxicating little tweeter! I especially enjoyed the way it drove the hi-hat and snare drum in "Romeo" and "Swimming Upstream," and the clarity with which it reproduced undistorted electric guitar.

Even full-sized cathedral organs, the most difficult of all musical instruments for a speaker to reproduce, fared pretty well through the Bookshelfs. Contrary to expectations, Roland Maria Strangier’s plodding performance of his arrangement for organ of Jupiter, from Holst’s The Planets, on Strangier’s English Town Hall Organ, Philharmonie Duisburg (24/192 FLAC, Linn Records), a recording rich in deep pedal notes, didn’t sound hopelessly thin through the small Aperions. In fact, I was surprised at how much of the energy of low notes was conveyed before, inevitably, they were steeply rolled off. I won’t go so far as to say that the Aperion Bookshelf defied physics or could reproduce low bass at loud volumes, but there was enough flesh on this organ’s bones to make it sound convincing.

While small speakers have come a long way in the last several years, my Mirage Omni 60s, for which I paid $600 in 2003, are still very competitive. With its 6.5" woofer and larger (16"H x 9"W x 12"D) cabinet, the Omni 60 has much more to work with in the bass department than the Verus Grand Bookshelf, and there, as expected, the Omni 60 outproduced the Aperion. Unexpectedly, the difference wasn’t as dramatic as the significant difference in these speakers’ sizes had led me to assume. While the Omni 60 produced more bass, I ultimately preferred the tonal quality of the Aperion’s Kevlar woofer over the Mirage’s aluminum-titanium cone. Metal woofers can at times sound dry to my ears; the Bookshelf’s woofer was warmer, the Omni’s a little sterile.

Thanks to its 360-degree-dispersion tweeter, the Omni 60 has no trouble sounding open and spacious while also offering precise imaging. In my living room, which is three times the size of my listening room and has mostly hard surfaces, the Omni 60s do a terrific job of filling the room with sound. But upstairs in my listening room, which is carpeted and equipped with a large sofa, the Omni’s dispersion pattern was less of an advantage. There, while I enjoyed the still-enveloping sound of the Omnis’ tweeters, I still preferred the tonality and greater clarity of the Aperions’ ASRs.

As the first bookshelf model I’ve reviewed in I don’t know how long, Aperion Audio’s Verus Grand Bookshelf reminded me that great things can still come in small packages. The Bookshelf isn’t just a fine-sounding speaker, it’s a refined-sounding speaker that doesn’t offer only a glimpse of high-end performance -- it’ll take you on a full tour and give you a T-shirt at the end. With a beguiling tweeter and a clean, overachieving midrange-woofer, the Verus Grand Bookshelf proves that its name is no oxymoron. It’s a speaker well worth an audition and its asking price. And it looks fabulous.