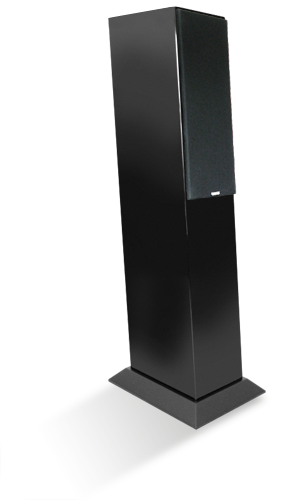 There are times when a boss seeks a volunteer for an assignment because the job is dirty or thankless or boring. But when SoundStage! Network editor-in-chief Jeff Fritz asked me to review Carnegie Acoustics’ Contemporary CST-1 loudspeaker, I coveted the assignment -- Jeff had described the speaker as “interesting.” In Jeffspeak, interesting usually means based on solid engineering, technically advanced, and well thought out. That was all he was willing to say -- Jeff prefers that his reviewers come to their own conclusions -- but “interesting” was all the hook I needed.

I got my first look at the Contemporary CST-1 ($1999 USD per pair) when I unboxed the review pair. Hmm . . . boy, a black, midsize tower with a tweeter between two woofers. Nothing to get excited about there. The dimensions (42”H x 8”W x 11.5”D) are what you’d expect in a typical midsize floorstander, but an unexpected touch was the cabinet’s slight backtilt, to better time-align the drive-units’ outputs. The second hint that there’s more to this speaker than meets the eye are the drivers themselves: a pair of 5.25” woofers and a 1” x 3” planar-magnetic tweeter of Mylar film. The woofer cones are made of Vipacor, Carnegie’s proprietary treated paper, and are mounted on a composite chassis; each is of 16-ohm impedance, and they’re wired in parallel to offer an easy-to-drive 8 ohms. The tweeter looks like a ribbon but is in fact a much more robust Mylar design. Metal-ribbon tweeters can be destroyed by a stiff breeze, let alone a probing three-year-old finger. Carnegie suggests -- but does not recommend -- that its tweeter can be thrown across the room and still be expected to perform.

That there’s more here than one can see is best illustrated by the complex transmission line hidden inside the CST-1’s pedestrian-looking cabinet. Although mum about the line’s precise design, Carnegie does volunteer what it’s supposed to do: allow deeper extension into the lower frequencies than would be possible from a simple ported box of the same size, exert better control over the woofers at the lower limit of their range, and provide clean bass free of colorations. A transmission line is much more expensive and complex to build than a ported or sealed box, which is why you don’t see many transmission-line speakers selling for less than $10,000/pair. The CST-1’s co-designer (Ron May is the other), Danny Ritchie, points out that the way the transmission line is wound through the speaker’s cabinet allows Carnegie to make that cabinet very stiff, thus aiding in the achievement of uncolored sound. The CST-1’s claimed frequency response is 49Hz-20kHz, ±2dB tolerance (-3dB at 42Hz), its sensitivity 89.5dB/W/m. It weighs 64 pounds.

The CST-1 accepts only banana plugs. Because the designers feel that bananas offer the best contact between speaker cable and speaker, Carnegie has gone all out on high-quality, banana-only connectors instead of compromised five-way binding posts. If you don’t have bananas, fear not; Carnegie includes some with the speakers. No doubt most Carnegie dealers would be happy to reterminate any speaker cable for a new CST-1 owner.

While the CST-1 seems to be a technical tour de force, it’s not the last word in fit’n’finish. The Piano Black Gloss paint of my review samples was well applied, but lacked the ridiculously deep finish seen on Aperion Audio’s competing designs, for example. That said, the CST-1 is hardly difficult to look at. 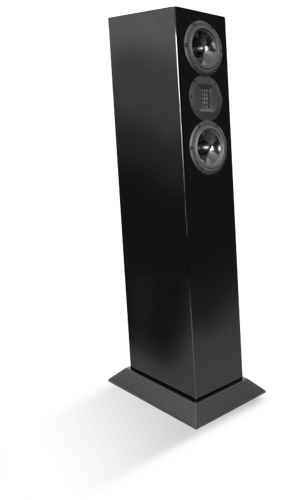 I tried to take my usual notes while listening to the Contemporary CST-1, but found that I wasn’t jotting down very much. Early on, I wrote, “Is this a speaker or a musical instrument?” I kept circling “musical instrument.” That spoke the truth to me, but didn’t help me much when it came time to put 2000 or so words down on the page.

As I listened to Beat Kaestli singing “Day In and Day Out,” from his Invitation (24/88.2 FLAC, Chesky/HDtracks), I was struck by the utter lack of added colorations in his voice, and the fact that he seemed to be in the room with me. Could this sound possibly be an artifact of a recording session in some faraway place? The effect continued with the brushing of the snare drum, the plucking of the double bass, the strumming of the guitar. It’s a cliché that great speakers open a window on a great recording, but there’s no better way to describe the CST-1’s sound when playing this track. But the CST-1 wasn’t a one-trick pony -- it excelled with everything I threw at it.

Through the CST-1s I found myself captivated all over again by Bruce Springsteen’s “Streets of Philadelphia,” from his Greatest Hits (CD, Columbia 67060). The emptiness of the recording space in which drummer Max Weinberg plays his solo intro riff, the funereal quality of the keyboards and their gravity, the delicacy of Springsteen’s voice in the chorus -- all had all the impact The Boss intended. No wonder this song won the 1994 Academy Award for Best Music, Original Song, for its appearance in Philadelphia. The CST-1 portrayed the recording with clarity and transparency, again giving me a clear view into the recording studio.

The background sounds in “Sinking Soon,” from Norah Jones’s Not Too Late (CD, Blue Note 74516) -- wood blocks, gongs, tortured guitar strings, flatulent trombones -- were easily distinguished through the CST-1s but remained in the background, where they were intended to be, and didn’t detract from the sonic gong show going on up front. Just how did they get that trumpet to talk? Remarkable reproduction by the CST-1s.

For assessing a speaker’s abilities to move air and take a beating, I know of few better recordings than Crown Imperial, with organist Mary Preston, and Jerry Junkin conducting the Dallas Wind Symphony (24/96 FLAC, Reference/HDtracks). This piece has it all: snare drum, thumping timpani, soaring flute, biting brass, full-scale pipe organ. The dynamic range spans from barely audible to deafening. Despite Carnegie’s claim that the CST-1 will go down only to 48Hz, -2dB, listening to that organ, I’ll be darned if it didn’t seem to go lower with no hint of sacrificed fidelity. Carnegie may have selected the transmission-line design to extend the bass output, but I defy anyone to illustrate where along the audioband the speaker goes from the drivers’ direct output to engineered from the venting.

Given the CST-1’s strengths in bass, detail, soundstage, and vocal clarity, perhaps the ultimate demo track was “Train Song,” from Holly Cole’s Temptation (CD, Blue Note 31653). With its deep, thumping acoustic bass, the choo-choo sound brushed out on the snare drum, a gong doing a reasonable job of sounding like a train racing past, and a simulation of Dopplered crossing signals created by dipping a cymbal in water, there’s a lot going on in this song -- not to mention Cole’s superb voice, which ranges from baritone to falsetto. Making sense of it all can give lesser speakers a fit, but the entire performance was nicely layered through the CST-1 -- what was meant to be in the foreground stayed there, and transient-effect noises were just that: here one second, nicely faded the next. The big deal here is that I’ve heard a sonic afterglow from the track’s “Doppler effect” from the tweeters of far more expensive speakers -- an extended ringing that seriously detracts from the music. The CST-1s’ planar-magnetic Mylar drivers handled it all with aplomb.

The only other floorstanding speaker I had on hand to compare with the Contemporary CST-1 was my reference, the Definitive Technology Mythos ST ($4999/pair). As I spent my own money on my STs, you can bet I like them a lot -- they do everything I like and nothing that I don’t. Each speaker’s active bass section goes deep into the high-30Hz range without breaking a sweat, and the Mythos ST’s midrange and treble performance is a benchmark even among more expensive speakers.

Therefore, it is with some humility that I inform you that the CST-1, at only 40% of the Mythos ST’s price, is in most respects the better speaker. In the midrange and treble departments, the Carnegie nailed it. While my DefTechs’ aluminum-dome tweeters hardly sound “etched” in comparison to the CST-1s’ Mylar panels, the Carnegies had a more natural presentation that drew me into their sound and didn’t let go. That naturalness -- what I suppose the CST-1’s engineers would call its uncolored reproduction -- is the Carnegie’s chief advantage over Definitive Technology -- and, I suspect, over most other speakers in the $2000-$5000 range.

The CST-1 couldn’t keep up with the Mythos ST in the bass, which is reasonable: each DefTech has a dedicated 200W bass amp and a significantly greater area of woofer cone. Still, while the Mythos goes much deeper, the CST-1 offered -- here it comes again -- a more natural sound. This is why I kept circling “musical instrument” instead of taking actual listening notes. The CST-1 didn’t sound like a speaker; it sounded like the music passing through it. Perhaps, then, it sounded like nothing at all -- the highest compliment that can be paid a loudspeaker.

Pretty much every manufacturer trying to sell a $2000/pair loudspeaker thinks it’s come up with the right voodoo to dethrone the Paradigms and PSBs out there -- a speaker that would sell like gangbusters if only people knew about it. Nine times out of ten, such manufacturers are dreaming. Carnegie Acoustics represents that rare tenth maker: a company that makes a speaker that sounds so beautiful you wonder why everyone doesn’t own a pair. If you want deep, natural bass, silky highs, a natural midrange, detail enough to satisfy pickers of the tiniest nits, and a soundstage so natural that a photo of this speaker should appear beside the dictionary definition of the word, the CST-1 is the speaker for you.

The Contemporary CST-1 is one of the finest loudspeakers I’ve ever heard. That it can be had for a paltry $1999/pair is a miracle. If I didn’t need a new car, you can bet that the CST-1s would never be allowed to leave this place. But then, Christmas is coming . . .