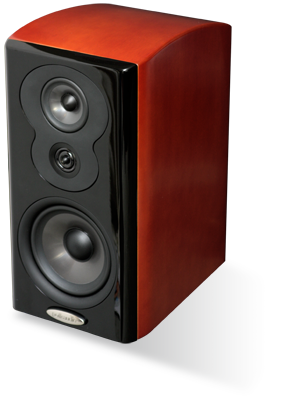 Polk Audio might not always be associated with audiophile products, but they’ve been making high-quality loudspeakers for 40 years now. Founded in 1972 by Matthew Polk and George Klopfer, later joined by Sandy Gross (most recently of GoldenEar Technology), Polk currently makes a wide range of products, from automotive and marine speakers to in-walls, headphones, iPod docking stations, and several lines of reasonably priced, high-performance home audio and home-theater speakers. They’ve also come up with some high-end gear over the years, including the Signature Reference Theater (SRT) home-theater system, whose 5.1-channel array comprised 35 drivers in seven enclosures.

I’ve admired Polk’s LSi speakers for their robust build quality and exceptional sound, and I heard a few times the original LSi9, which Doug Schneider positively reviewed when it was launched -- but it’s been ten years since Polk introduced the line. So when I saw their replacements, the new LSiM series, at the 2011 Consumer Electronics Show, I was more than a little intrigued. When I heard them, I was thoroughly impressed by the largest floorstanding model, the LSiM707, for its astonishing sound and reasonable price (by high-end standards) of $1999.95 USD each. For me, it was one of the highlights of the show.

There are six models in the LSiM series: two floorstanders, two center-channels, a surround, and a bookshelf. As my review queue has recently included several high-quality bookshelf models, I was happy to add to it the LSiM703 ($749.95 each).

The Polk LSiM703 is rare in that it is a three-way bookshelf speaker. Most manufacturers offer two-way bookshelf models, the next step up in their lines often being a small two-way or 2.5-way floorstander. The LSiM703 has a 1" tweeter, a 3.25" midrange cone, and a 6.5" midrange-woofer, making it a true three-way design. According to Stu Lumsden, VP of engineering, Polk was somewhat reluctant to make a three-way bookshelf, which would require more crossover components than a classic two-way design -- but because sound quality was their prime consideration, they went for a three-way.

The LSiM703 is fairly large for a bookshelf at 16.75"H x 8.8"W x 14.6"D and 29.6 pounds. The cabinet, finished in real-wood veneer, has a gently curved top and narrows slightly from front to back. I was impressed by the speaker’s fit and finish and its eye-catching Mt. Vernon Cherry veneer. (It’s also available in a much darker Midnight Mahogany.) The high-gloss, black-lacquered front baffle has curved edges, flush against which the very thin grille is attached with magnets. This ingenious method of mounting the grilles reduces diffraction, says Polk, but I did all my listening with the grilles off. 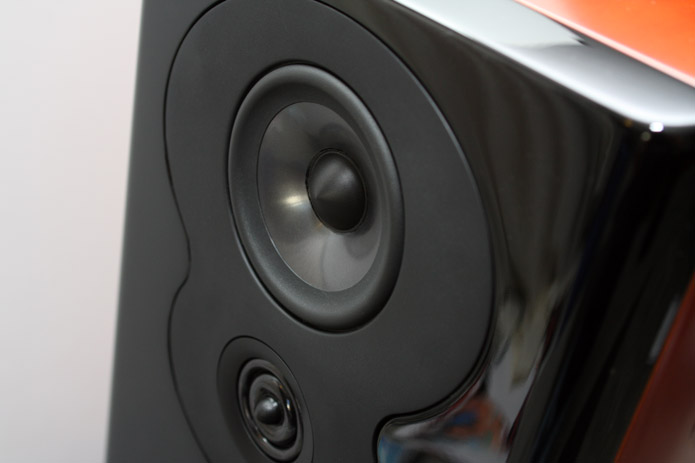 The tweeter is a ring radiator, and the midrange has a cone of super-cell Aerated Polypropylene (APP), a mineral-filled polypropylene into which air has been injected to form a honeycomb structure that’s thicker, stiffer, and lighter than more traditional cone materials. These two drivers are mounted close to each other on a separate molded panel and together comprise Polk’s Dynamic Sonic Engine. This is designed to provide uniform dispersion and reduce backwave reflections, and is used in all LSiM models. The 6.5" midrange-woofer also has a cone of super-cell APP. Extended Linear Motion voice-coils are said to allow greater excursion and power handling, and the baskets of cast aluminum have an open design for ample venting. The Orth crossover features such high-quality components as air-core inductors and Mylar and polypropylene capacitors. 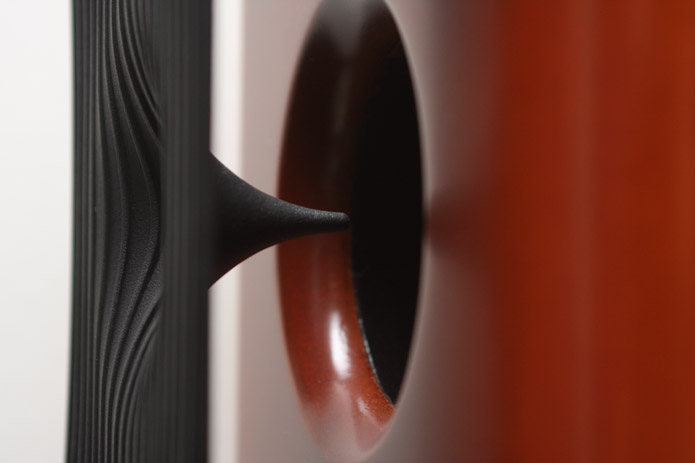 The enclosure is made of 0.75"-thick MDF with a 1.25"-thick MDF baffle and "substantial" internal bracing. The Dynamic Sonic Engine and bass driver are each housed in a separate internal chamber with nonparallel walls, to reduce internal standing waves. An interesting feature of the enclosure is something that Polk calls a PowerPort for bass venting. Essentially, the point of a cone attached to a plate mounted away from the rear of the speaker extends into the port, to reduce the turbulence that can cause distortion and port noise and reduce efficiency. The PowerPort’s redirection of the port’s output back toward the speaker also means that you can probably place the speaker closer to a wall than if it had a traditional rear-firing port. The LSiM703 has two pairs of high-quality binding posts, spaced widely apart so that they can easily be used with large, heavy speaker cables. The binding posts are connected with wire jumpers that can be removed for biwiring or biamping. 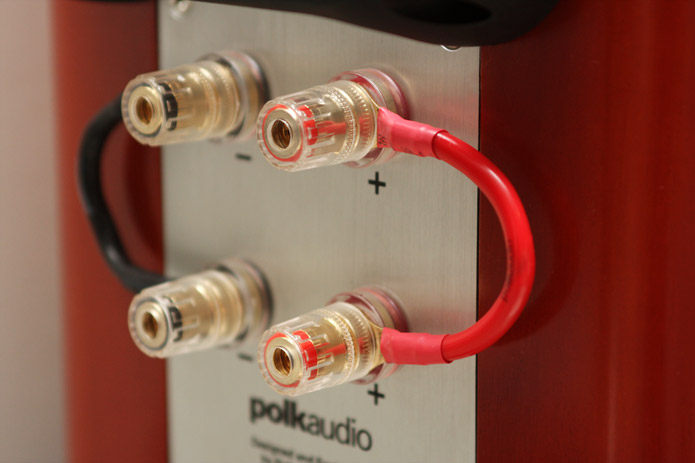 Other than its ring-radiator tweeter and PowerPort, the LSiM703 bears little outward resemblance to the original LSi9 bookshelf -- judging from Polk’s description, it’s a complete redesign. I didn’t mind the boxy look of the original LSi models, but the LSiM703, with its gentle curves, its high-quality wood veneer, and its black-gloss baffle, is quite attractive. At $1499.90/pair, the LSiM703 costs considerably more than the LSi9 ($1040/pair when introduced), but the price seems fair, considering the extent of the changes and the decade separating the two models.

The LSiM703 is too large to realistically be placed on a bookshelf, which isn’t really a good place for a speaker anyway. Even so, it’s small enough to necessitate a decent pair of stands. I placed the speakers on 24"-high stands, to bring the tweeters up to just about the level of my ears when I’m seated. Some might prefer to use them with 26"-high stands, but I found that mine performed very nicely. I set the LSiM703s about 6’ apart, as I do with most speakers in my room, and angled them in toward, but not aimed directly at, the listening position.

The Polk LSiM703s were driven quite well by my Bel Canto e.One C5i integrated, which outputs 60Wpc into 8 ohms and doubles that into 4 ohms. They sounded even better with the e.One REF1000 monoblocks, each of which puts out 500W into 8 ohms. The LSiM703 will benefit from a big, beefy amplifier, but it’s not a necessity.

The lower registers of the piano in Peter Gabriel’s cover of "Power of the Heart," from his Scratch My Back (24/48 FLAC, Society of Sound), solidly filled in the soundstage behind Gabriel’s raspy, crisply placed voice. The Polks went deep enough to provide a good sense of the power of the piano, which often sounds thin through small speakers. Strings were vibrant, and the horns provided an uplifting, melodic interlude -- the entire sound was relaxed and natural. The LSiM703s were equally at ease with Gabriel’s austere, methodical presentation of "Boy in the Bubble," providing chillingly stark aural images of solo instruments intertwined with Gabriel’s singing of the song’s bleak lyrics.

Norah Jones’s Come Away With Me has always sounded a little indistinct to me, and the Polks did nothing to change my mind, even with a high-resolution download (24/96 FLAC, Blue Note/HDtracks). They revealed that the double bass in "Cold Cold Heart" lacks some definition, as does the snare drum in "Don’t Know Why." Jones’s voice was detailed but had some sibilance, and lacked the palpability and immediateness that characterize very good recordings.

Cyndi Lauper’s The Body Acoustic by (16/44.1 FLAC, Sony) is by no means a perfect recording, but it captures a more natural sound, and the LSiM703s were able to convey it. While the Jones album sounded rather cold and sterile, Lauper’s was rich and inviting. The Polks presented the music without editorializing on the sound, allowing me to hear it as it was produced, for better or for worse. The strumming of the guitars in "Time After Time" had a precise, decisive quality. Though the drumbeats were not mixed very loudly, they were deep and tight. This is a closely miked recording, but there was little sibilance, even when Lauper’s voice reaches its limits and almost cracks. In contrast, the voice of Sarah McLachlan, who accompanies Lauper on this track, remained smooth and composed. 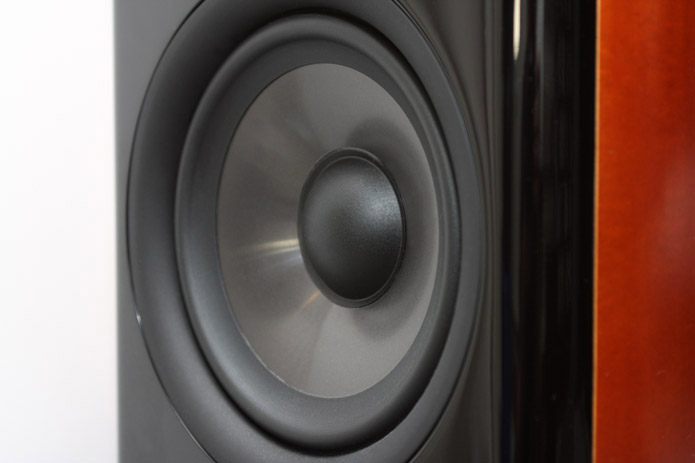 The LSiM703’s bass response with acoustic recordings was surprisingly good for a bookshelf design. Then I pulled out my current reference recording for low frequencies: Daft Punk’s "Solar Sailer," from the Tron: Legacy soundtrack (16/44.1 FLAC, Walt Disney). Admittedly, the subsonic bass in this track was absent, but the midbass and even a fair bit of the low bass were clearly reproduced. The Polks didn’t seem to strain even at fairly high levels; the deep-rolling bass in this track remained well delineated and never became homogenized.

The LSiM703’s sound was neutral but slightly on the warm side -- not necessarily a bad thing. It was detailed, but not overly revealing of poorer recordings. Listening to a song that I’ve recently grown reacquainted with, thanks to Doug Schneider -- "Pacing the Cage," from Bruce Cockburn’s The Charity of Night (16/44.1 FLAC, True North) -- I was captivated by the sincerity of Cockburn’s performance. His relaxed but earnest singing and skillful musicianship, and Rob Wasserman’s wicked bass solo, were presented in a straightforward manner that was immediately involving but revealed no weaknesses in the speaker, even after repeated listening.

Like every other speaker I’ve recently reviewed, the Polk LSiM703 could not compete with PSB’s extraordinary Imagine Mini ($760/pair) in terms of smoothness in the midrange and upper frequencies. For its price, the Imagine Mini is a stunning performer, and its utter transparency in the midrange is striking. Voices are absolutely clear, and long-term listening is a pleasure -- I never succumb to listener fatigue. The Polk, too, was an excellent performer over long listening sessions, but it just didn’t have the PSB’s sparkling midrange purity.

The Imagine Mini has some bass, but not enough to rock out to party tunes. Listening to the Japanese remastered versions of the Cars’ albums on SHM-CD, the PSB’s lack of bottom end kept these classic songs from jumping. While everything from the midrange up was pristine, I could easily hear that it was being produced by a very small minimonitor. Through the Polk, the sound was more like what you’d expect to hear from a small floorstander. "It’s Not the Night," from the Cars’ Heartbeat City (16/44.1 FLAC, Elektra), was punchy and visceral; the PSB lacked drive by comparison.

Speaking of bass, my current reference speaker is the bipolar Definitive Technology BP-8080ST SuperTower ($2998/pair), which has a built-in 12" subwoofer driven by a 455W amplifier and two 12.5" passive radiators. The LSiM703 couldn’t be expected to keep up with the DefTech, and it didn’t -- but unlike the PSB Imagine Mini, it did have enough low-frequency response to make listening to even the most bass-heavy tracks enjoyable. Daft Punk’s "Solar Sailer" has wave after wave of ultralow frequencies that envelop the room through the BP-8080STs. The LSiM703s couldn’t replicate this subsonic bass, but had enough kick that this track sounded lacking only in a direct comparison.

The Polk LSiM703 couldn’t match the immaculate midrange of the tiny PSB Imagine Mini, nor did it have the massive bottom end of the Definitive Technology BP-8080ST’s powered subwoofer section. What it did offer was a very good, balanced sound in a well-made bookshelf design. 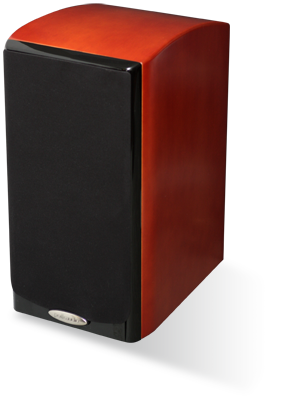 It’s reassuring to buy a pair of loudspeakers designed and built by a company as large and well-established, and with as diversified a product line, as Polk Audio’s -- but the speakers still have to deliver. With the LSiM703, Polk has rediscovered their audiophile roots. Not only does it sound very good; it’s also well built, its curved cabinet is attractive in its real-wood veneer, and it’s available at a reasonable price for all that it offers. If you’re in the market for a high-quality, full-size bookshelf loudspeaker, the Polk LSiM703 deserves your consideration.