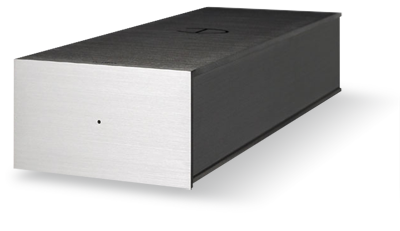 While I’ve lately been enjoying the digital performance of my audio rig, I still love to listen to vinyl. So when the offer came to review Densen Audio Technologies’ DP-Drive phono stage with DP06 moving-coil board ($1350 USD), I jumped.

The DP-Drive phono preamplifier is a simple, minimalist design, befitting its Danish heritage: a silver box of brushed aluminum measuring about 3"W x 2"H x 12"D and weighing about 5 pounds. It can be ordered with the DP04 moving-magnet board or the DP06 moving-coil board; you can directly plug your MC cartridge directly into the latter without the need of a step-up device.

On the front panel is only a very small red LED that illuminates when the DP-Drive is powered up. The rear panel has one set each of single-ended RCA inputs and outputs, a toggle power switch, a phono ground, a jack for the plug from the wall-wart power supply, and not much space for today’s thicker cables with large connectors. Installed in the unit I reviewed was Densen’s DP06 MC board.

From what I’ve been able to glean from Densen’s website, the DP-Drive uses small lights to drive the power supply. That’s right; two sets of blue LEDs shine on photovoltaic cells: specialized semiconductor diodes that convert visible light into DC, to supply power to the board. Older versions of the DP-Drive used small light bulbs, but these were found to be unreliable and had to be changed every two years, which most owners did not appreciate. LEDs have proven to be much more reliable. This novel mode of power supply made this analog purist very curious to hear how it would translate into sound. At first I didn’t think a wall-wart power supply would do justice for a critical piece of equipment such as a phono preamp, but on the evidence of what I heard, Densen’s implementation of it seems just fine. 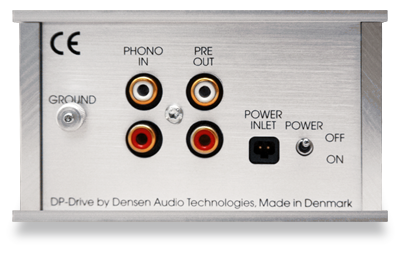 The DP-Drive is attractive and seemingly well made. The top cover of the unit has “DP-Drive” engraved towards the front of the top part of the case, while a nice-sized, easy-to-read letter “D” resides in the center. Underneath this reads “Densen Audio Technologies.” My only regret was that I was unable to open it up and take a look at the workmanship inside. Densen is well known for the build quality of their products, and from the photos I’ve seen, it seems that the DP-Drive doesn’t sully that reputation. My review sample had a few screws that had no grip -- my wrenches just spun without being able to turn them. Not wanting to earn a reputation for destroying review units, I decided not to force anything.

The DP-Drive was well behaved during the time it was in my system. There were no loud turn-on thumps or other sonic surprises (such as when I turn the lights on or off) that I felt I needed to beware of. All connections remained tight throughout the review period; with as much switching of cables in and out as I did, that was of some comfort. The design seems to be clean, and the DP-Drive performed about as expected.

I didn’t know how long the review sample had been out of use, or if it had been used at all, but when I listened to it straight out the box, music wasn’t involving and didn’t sound lively. I decided a little break-in was in order. After a couple days left powered on and a couple hours of play, the DP-Drive’s sound really livened up and allowed me to hear deeply into my LPs.

After being warmed up, the DP-Drive sounded free-flowing -- it got out of the way of the music and let the tunes come through. Although it did a good job of keeping down background noise, a very low-level hiss was always audible. My cartridge, a Transfiguration Phoenix, has an output of 0.4mV, which is a bit on the low side and may have had something to do with this.

The DP-Drive was a bit on the warm side of tonal accuracy. It displayed very good dynamic range, especially with well-recorded drums and synth programs. The Densen had an excellent sense of bass depth and weight, and its high-frequency performance was just about neutral, never really drawing attention to itself: The highs were there when they should have been, but didn’t sound rolled off or softened. The DP-Drive possessed a clear midrange, rendering images within the soundstage with clarity, presence, and realistic timbres. Performers were laid out on a nice-sized stage that extended slightly beyond my speakers’ outer side panels. Individual images occupied their own spaces, and their presence felt independent of the speakers’ physical positions.

In the past, I’ve spent time with phono stages that did good jobs with, say, popular music, but struggled to reproduce the pace and rhythm of a symphony orchestra or solo acoustic piano. Not the DP-Drive -- it sounded very good with all types of music. It handled the increased scale and complexity of classical music with ease, always maintaining the music’s tunefulness.

I listened to, among other classical LPs, Bruno Walter leading the Columbia Symphony Orchestra in Dvorák’s Symphony No.9 (LP, Odyssey Y-300450). The entire recording is powerful, but especially the beginning of the fourth movement, when the horns enter, followed by the strings and timpani -- one of my high watermarks in classical music. The DP-Drive let me hear the layering of the orchestra’s various sections and feel the dynamic range and impact of the bass. There’s a lot of “air” on this LP; the instrumental decays tell you that it was recorded in a large venue. All of this low-level detail was clearly conveyed with the DP-Drive in the system.

Another recording that puts my system to the test is Jean Paul Morel conducting the Royal Opera House Orchestra in excerpts from Tchaikovsky’s Swan Lake (LP, RCA LM-2227). It replicates an orchestra at full tilt, and captures the rich timbres and tonal colors of the instruments, all while making the performance sound lifelike. The first movement of the work is haunting and beautiful, and through the Densen, the tonality and the timbre of the brass really caught my ears. The horns and strings carry this movement in the beginning, and they played with such great emotion as heard through the DP-Drive. The DP-Drive did a good job of allowing the feeling with which the instruments were played to come through unfiltered. 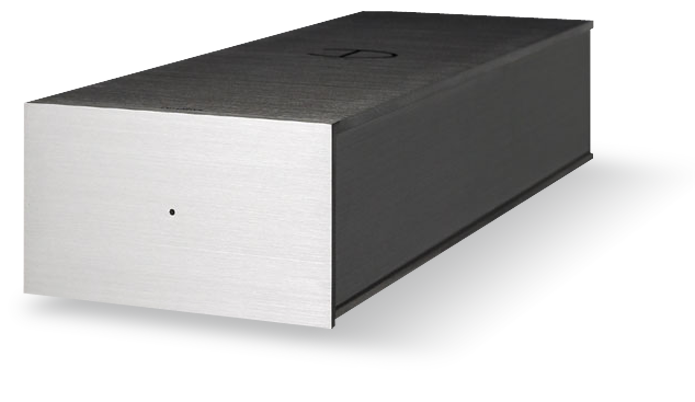 Time for women’s voices. I began with Karrin Allyson’s In Blue (LP, Concord Jazz/Pure Audiophile PA-007 2). Allyson’s singing here is excellent: blues, mostly backed by jazz musicians, with the overall feel of a jazz album. Allyson sings with great passion and emotion. “The Meaning of the Blues” and “How Long Has This Been Going On?” are both very reflective and sobering, differing from the up-tempo yet bluesy “Evil Gal Blues” and “Bye Bye Country Boy,” and really showing her range and depth. The DP-Drive did a credible job of allowing me to hear the intricate yet textured quality of Allyson’s singing.

One of my favorite jazz albums, especially for the energy and obvious joy all the musicians had in playing with one another, is Charles Mingus’s Mingus at Carnegie Hall (LP, Atlantic SD 1667 0698). The album has only two tracks, one per side, each over 20 minutes long: “C Jam Blues” and “Perdido.” All the players are onstage at the same time and simply take turns soloing. In one particularly fun passage, which the audience enthusiastically applauds, tenor saxophonists Rahsaan Roland Kirk and George Adams take turns fingering each other’s instruments as each man continues to blow his own horn. The DP-Drive did a very good job of letting me follow the different players’ individual tones and pitches.

I was able to compare the Densen DP-Drive with only my ASR Mini Basis phono stage, which, at $1000 more, has some advantages. The ASR is noticeably quieter, which you’d expect for its higher price, but the DP-Drive was able to hold its own in the reproduction of dynamic range and transient response. The ASR was superior at detail retrieval, and at revealing ultra-high-frequency information and low-frequency weight and extension; the Densen sounded a tad warmer in the upper bass and lower midrange. That warmth tended to make music sound punchier through the DP-Drive, which was nice with up-tempo popular or synthesized music, but it didn’t work quite as well with small-combo jazz or classical.

At $1350, the Densen DP-Drive does a real nice job without breaking the bank. If you’ve invested a lot of money in your analog rig, you may want to look at phono preamps from the likes of ASR or Whest Audio, which will dig even deeper into your vinyl. But those more expensive models won’t fit everyone’s budget.

If you’re not ready to take a big leap into high-priced analog sound, the DP-Drive is an affordable alternative. It’s a minimalist design, it sounds good, and it’s well built -- a good value that should find a home in many mid-priced analog rigs.