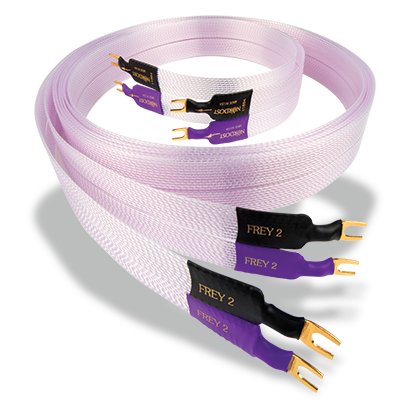 My first proper review for the SoundStage! Network was in 2011, of Nordost’s then-brand-new line of Leif cables -- specifically, the LS Blue Heaven models. I was so impressed by how significant a change they wrought in my system’s sound that I bought the review samples. Almost three years later, I still make frequent use of the Blue Heavens, as the New England-based company marches onward in its development of some of the world’s finest audio cables.

In 2012, Nordost introduced the second generation of its Norse line, which comprises three series: Heimdall 2, Frey 2, and, at the top, Tyr 2. In the spotlight here are the Frey 2 cables, named for the Norse god Freyr, who was associated with the qualities of sacral kingship, virility, prosperity, peace, and pleasure. Indeed, legend has it that Freyr was part of the lineage of the royal family of Sweden, which includes the hallowed name of Odin, ruler of Asgard, and for whom Nordost’s flagship line is named.

Conductors of 22x22 AWG are used in the speaker cables, as compared to the original wire’s 28x24 AWG. The horizontal lay of these conductors constitutes Nordost’s signature flat cable geometry. Unlike their Blue Heaven speaker cables, whose shell of fluorinated ethylene propylene (FEP) was quite pliable, the FEP-sheathed Frey 2s felt significantly more rigid and substantial, as they should for the premium in price. Their purple tint is a nice touch, and the attention to detail in the ribbon wires is impressive. Compared to the original Frey speaker cables, the Frey 2s enjoy a 12% lower capacitance of 10.3 picofarads per foot -- according to Nordost, this increases the speed of the cable’s signal transmission while lowering signal loss. 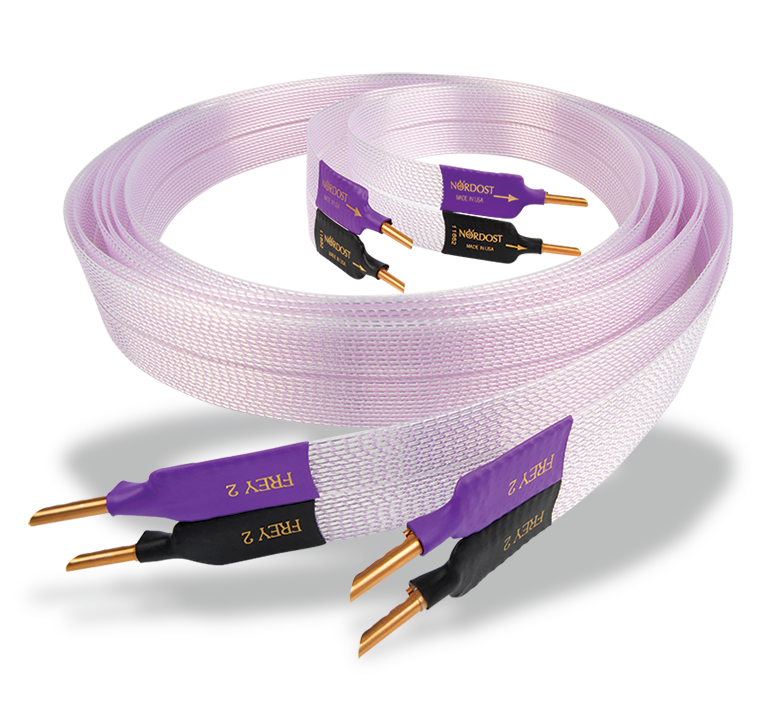 Available connectors include spade or banana, but not biwire -- Nordost has found that shotgun termination offers superior performance. A word on the spades: Very small, they don’t fit around a standard binding post. With many of the amps and speakers I had in for review, I had to insert a single prong of the spade through the hole in the post. I was unable to use the Frey 2s at all with the special posts of Simaudio’s Moon Neo 340 integrated amplifier. Bananas are the way to go.

The Frey 2 analog interconnect has 5x24 AWG conductors, a light purple jacket, and MoonGlo RCA connectors (Neutrik XLRs are also available). The conductor is dual Micro Mono-Filament, the same geometry used in Nordost’s Valhalla 2 and Odin lines. Unlike the symmetrical design of its predecessor, the Frey 2 has asymmetrical grounding -- one signal and four ground conductors -- which purportedly lowers the IC’s noise floor and thus increases its resolution. The RCA connectors were nice, with spring-loaded flanges that satisfyingly snapped into place. A helical geometry is used in both interconnect and power cord. 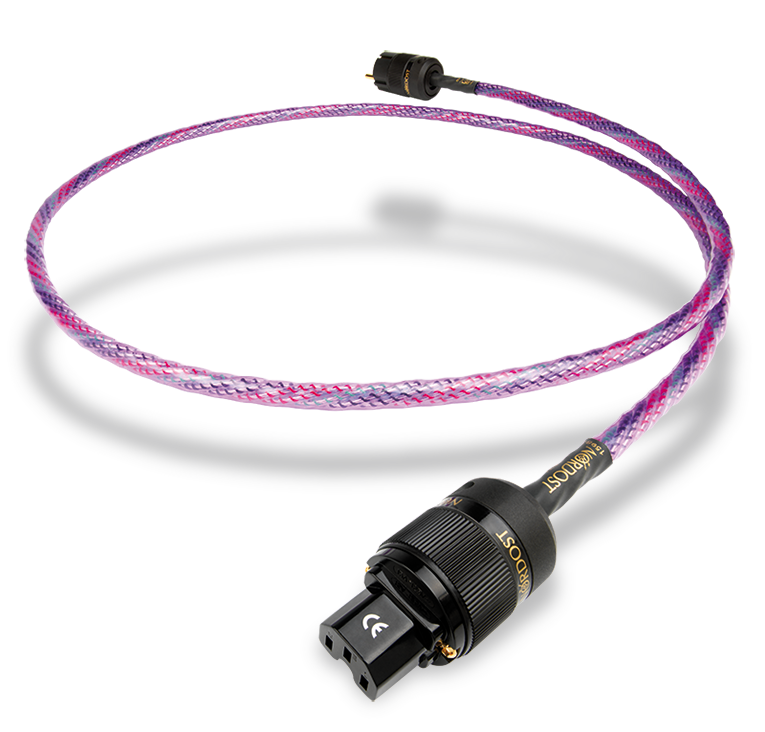 Speaking of the Frey 2 AC cords, not only are they colorful (see photos), they’re thick -- not garden-hose thick, like some companies’ cords, but pretty rigid. Conductors of 5x16 AWG are used, with a capacitance of 8.8pF/ft. A variety of connectors are available, but their standard US connector, designed and built in-house, provides lower-loss transfer of alternating current and greater mechanical stability at the termination. Compared to the original Frey cord, the Frey 2 also features an improved monofilament winding that places less stress on the conductors, which also lowers the damping effects to the mechanical resonance with a 50Hz/60Hz AC signal.

Unique to Nordost is their proprietary Micro Mono-Filament technology, used in each of the models of my review set. Close inspection of the speaker and power cables -- unlike the interconnects, these have transparent outer jackets -- revealed remarkable craftsmanship. The tinted FEP filaments are precisely wound around the conductors, separating them from the FEP jacket. According to Nordost and many other cable manufacturers, the most effective dielectric is air, and this approach has served Nordost well for many years now.

I asked Nordost’s Paul Ritchotte about the benefits of Nordost’s unique “flatline” geometry, since almost everyone else takes the helical approach. He explained that, “in order to have a great balance of low capacitance, low inductance, low resistance, extreme signal speed (with low signal loss), and lowered magnetic field interaction between conductors, parallel conductors must be used.” He conceded that “cables are filters. Let’s face it. But we believe our job, our absolute goal, is to filter as little as possible.”

My past experience with Nordost cables had led me to believe that they possessed a sonic signature. My Blue Heavens render music in a delicate, airy manner that differentiates them from other cables I’ve heard: on the lean end of the bass spectrum, with a sparkling personality up top. All of this is quite subtle, but I’ve heard something similar from Nordost-wired systems at various audio shows. Was I imagining this? Maybe. Bias is a wickedly common beast in hi-fi that can lead reviewers and, in turn, readers -- you who buy this stuff -- down the wrong path.

I ran the Frey 2 speaker cables from my Hegel H300 integrated amplifier-DAC to my reference KEF R900 loudspeakers, hooked up the Benchmark DAC2 HGC with Frey 2 interconnects (whose MoonGlo connectors snapped into place in a satisfying manner), inserted a Frey 2 power cord into the Hegel, and hit play on my Apple MacBook Pro. The sound was . . . open. Wide open. Soundstaging is a particular strength of Nordost products, and the Frey 2s were no exception. Through the Freys, everything sounded so lithe. 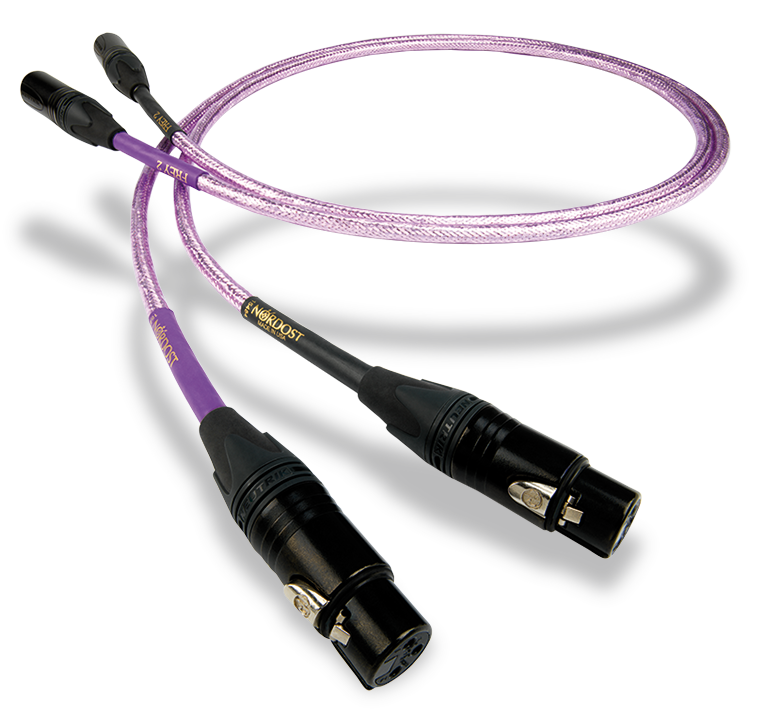 Ronan Harris’s hearty voice in “Everything,” from VNV Nation’s Transnational (16-bit/44.1kHz ALAC, Anachron Sounds), seemed to leap from my KEFs, exhibiting a slight midrange forwardness that I heard throughout my time with the Frey 2s. My experience of a great many loudspeakers and their varied frequency responses has demonstrated that a paucity of bass, for instance, will accentuate the apparent impact of voices and instruments -- addition by subtraction, if you will. In this case, the lead singer of VNV Nation, one of Germany’s premier electronic bands, was presented with delicious clarity, and stood independent of the pulsing bass line that forms the foundation of “Everything.” Disentangling and rendering with appreciable speed, the Nordosts portrayed Harris’s voice in an honest if spotlit manner. The Frey 2s would be welcome additions to the systems of those whose collections favor singer-songwriters, vocal jazz, and/or opera.

Which brings me to my reference track for bass performance: “Why So Serious?,” from Hans Zimmer and James Newton Howard’s original soundtrack for The Dark Knight (16/44.1 ALAC, Warner Bros.). About 3:30 into this track, the entire top half of the audioband disappears, leaving only a deep bass line. By deep, I mean the kind of bass that’s more felt than heard -- you could easily hold a normal conversation with someone while your amp struggles mightily to hammer out the subterranean notes. Whether I used the Nordosts or my Dynamique Audio Caparos, at a certain volume, bass overloaded the room (kudos to my KEFs), but I felt that, up until that point, the Nordosts were just a bit less ripe and less pronounced -- no sea change, but noticeable with a track I’ve probably heard 100 times. I couldn’t characterize the Frey 2s as bass-light, or in any way unable to re-create the depth of such brutal tracks. Rather, they ever so lightly abbreviated, to the benefit of the rest of the audioband. 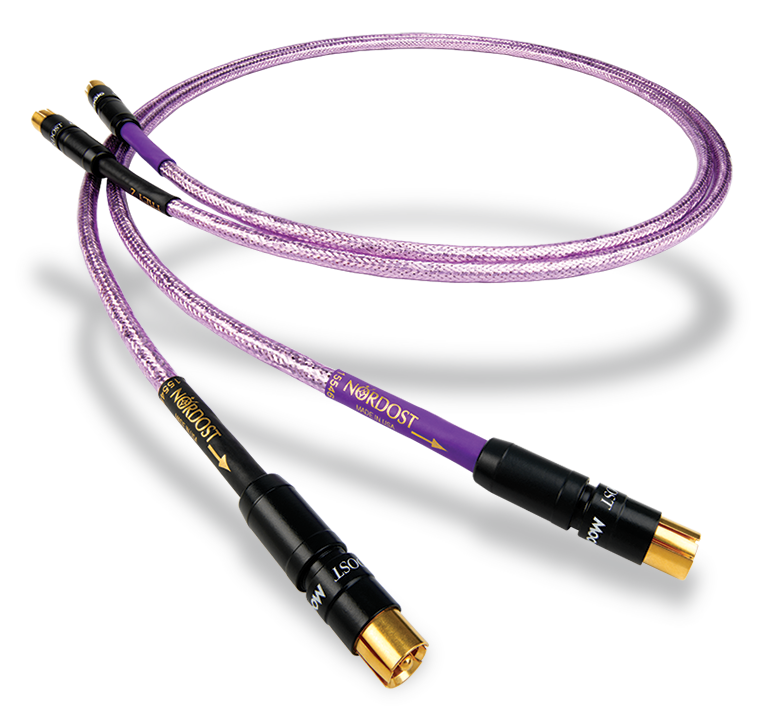 Throughout the treble the Frey 2s really sang, delicately treading the fine line between airiness and glassy brightness, concision and that etched quality that many audiophiles have likely encountered in their never-ending journey toward aural enlightenment. Randy Edelman’s arrangement of “Fife and Gun,” from the soundtrack of Gettysburg (16/44.1 ALAC, Milan), a 254-minute film funded by American Civil War buff Ted Turner (who makes a cameo appearance), is a prime example of this. The fife is a small transverse flute similar to a piccolo, with a shriller sound due to its narrower bore. In the Civil War, it was used primarily as a signaling instrument, and in this track it’s easy to hear why. The instrument has a distinctive whistling sound, and through the Nordosts it danced ethereally beyond a strummed guitar in the left channel, and faux cannon blasts from the right. The fife was wonderfully smooth and light on its feet, yet never bereft of detail, and was a delight to listen to. The Frey 2s shared a keen strength with my Nordost Blue Heavens: both can accurately portray a recording space.

The Frey 2s neither added to nor detracted from the tonal colors in a given recording -- such as Chris Martin’s voice in “What If,” from Coldplay’s X&Y (16/44.1 ALAC, Capitol). Martin has a good amount of texture to his voice, with an occasional wavering quality to his leading and trailing edges. The Frey 2s finely delineated his voice without becoming edgy, and despite having a higher-pitched voice, he never sounded threadbare. The Frey 2s were agile, that’s for sure. And resolving, too -- significant amounts of detail poured from my KEFs.

The Nordosts’ qualities should be easily audible to someone who wants to upgrade from older, less accomplished cables. If there’s a cable company whose products soundstage with the same breadth and agility that Nordost’s can, I’m unaware of it. They certainly make for an engaging, light-footed listen.

In my system are a number of cables made by the British company Dynamique Audio: hybrid copper-silver Caparo ($1325/2m pair) and all-silver Celestial ($7650/2m pair) speaker cables, and all-silver Shadow interconnects ($795/1m pair with RCAs). Dynamique strongly believes that the best conductor is pure silver, and so integrates the metal into as many of its products as possible. While the Caparos and Shadows cost less than the Frey 2s, and the Celestials far more, the comparison was illuminating. I replaced the Frey 2 cords with OEM cords.

The Dynamiques had a more robust sound than the Nordosts, with a heartier, more substantial midrange. Although the Caparos and Celestials lacked the Nordosts’ seeming expansiveness of presentation, this was due in large part to Dynamiques’ anchored bottom end. With punchy material, the Dynamiques produced a great sense of impact, volume, and weight. The degree of difference here was slight, but as many who buy audiophile cables no doubt expect to own them for a long while, such subtle differences will become magnified over time. The Frey 2s surpassed the Caparos in sheer resolving ability, and offered minute improvements in imaging and soundstaging. When I introduced the Celestials, however, the Frey 2s’ limits were exposed. The Celestials cost more than twice as much as the Frey 2s and sounded every bit of that difference. They were brutally resolving, but never harsh unless the recording was. They opened a cavernous window on my music while offering imaging of the highest order. And their build quality -- healthy amounts of pure silver, flagship WBT spade connectors, high-quality dampers -- outclassed the modest Nordosts’ flat geometry.

None of which should surprise. Nordost itself offers several higher-performance lines of cables above and beyond the Frey 2s, which are decidedly more capable. But while the Celestials are the best cables I’ve ever heard, the Frey 2s -- especially the speaker cables and interconnects -- offer a very high level of performance that should please the most discerning audiophile. I have every confidence that, accompanying gear of markedly higher prices, they would acquit themselves damn well.

When the subject of conversation turns to the best cable manufacturers in the world, Nordost is usually one of the names that comes up. Their Frey 2 line combines a goodly amount of knowledge and engineering harnessed from their vaunted Valhalla cables, at an attainable price point -- no mean feat, given that they were designed and are made entirely in the US. Their terrific resolving ability is married to a sound of prodigious size and scale, qualities that any listener will be able to appreciate. Norse god Freyr would no doubt agree -- suksess!