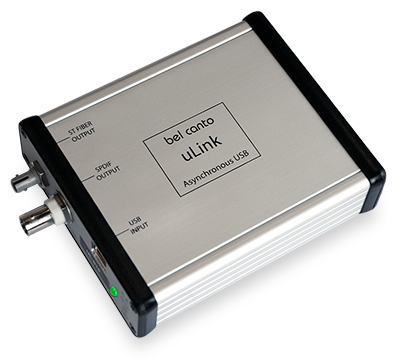 Bel Canto Design’s e.One uLink asynchronous USB converter ($675 USD) belongs to a category of component I did not know was still being made -- these days, more and more DACs have USB inputs. The uLink serves a very specific purpose: to pass along to a digital-to-analog converter computer audio data in an audio-appropriate digital form to deal, especially, with those instances when the audio data and the audio clock are out of sync.

I was skeptical that such a product would make much difference in the sound. Earlier this year, I reviewed Bel Canto’s e.One C7R receiver, which itself has a USB input, along with pairs of optical and coaxial inputs for digital audio. The C7R’s USB input can be used with Windows drivers, and natively supports resolutions up to 96kHz. Windows natively supports the USB Audio Class 1 standard, from 1998, which was based on USB 1.1 “full speed” data-transfer rates of 12MB/s and incorporates a maximum package or data-frame size of 1024 bytes per millisecond. The highest common two-channel bit and sample rate that meet that package-size requirement is 24/96, which comes in at 576B/ms; 24/176.4 would need 1058.4B/ms. Microsoft has yet to adopt the USB Audio Class 2 standard (2009), which supports bitrates as high as 32/384 and multichannel, requiring vendors to provide such functionality. Linux (kernel 2.6.35) and Apple OSX (v.10.6.4, Snow Leopard) added support in 2010.

Beyond bit-perfect support for such higher resolutions as 176.4 and 192kHz, the C7R lacked asynchronous USB capability. The primary benefit of asynchronous USB is to sever the clock from dependence on the bus; instead, an external clock is used to control the movement of data out of the buffer and to regulate the quantity of data coming from the host computer. The audio community has eagerly adopted this method, which dramatically reduces sensitivity to bus jitter.

The e.One uLink provides these features to those who connect their computers to one of the many higher-end DACs that lack USB inputs or that fail to maintain their asynchronous USB drivers over time. Of the roughly 500 motherboards listed at computer-parts retailer newegg.com, only about half have optical or coaxial outputs -- and the vast majority of these are optical only. Dedicated digital audio outputs are even less common on notebook computers.

The uLink’s price and specifications place it between Bel Canto’s two other USB bridge models, the e.One mLink ($375) and the e.One REFLink ($1495). The uLink is a small (4”W x 1.2”H x 4.75”D) aluminum box weighing a pound, with black plastic bumpers on the front and back and four tiny rubber feet on the bottom. It looks like a pro-audio direct-injection box I have, the black plastic accenting the silvery aluminum case. There is no power switch because the uLink draws its power from the USB connection: When it’s connected to a USB port of even a sleeping computer, a green LED glows on its rear panel.

The uLink has two output options: coaxial S/PDIF on BNC, and LightLink ST on ST Fiber. The mLink lacks the ST Fiber output; the REFLink adds AES/EBU via XLR, and a dedicated power supply. All three have the same 500MHz DSP processor and S/PDIF output circuitry, but differ in their data clocks: the mLink uses Low Phase-Noise clocks, while the uLink and REFLink use dual Ultra-Low Phase-Noise clocks; the REFLink adds further isolation. The uLink comes with a BNC-to-RCA adapter, which is fortunate -- Bel Canto’s own e.One C7R has neither ST Fiber nor BNC inputs (though the e.One DAC3.5VB Mk.II DAC has both).

With just two cables, physical setup was simple: USB from computer to uLink, and digital audio onward to the DAC. Using the provided BNC-to-RCA adapter, I connected the uLink to an S/PDIF input on the C7R. While the uLink’s power light never went off, Windows often lost contact with the uLink after the computer woke from sleep -- the uLink was no longer shown as an available audio playback device. Each time, I had to remove the USB cable and plug it in again. Unlike the C7R’s USB input, which is supported by the audio-class driver supplied by Microsoft, the uLink requires the Windows user to download and install a driver. Recent versions of Apple’s Macintosh OSX are supported by the standard OS-bundled driver. Linux is not officially supported. While there is no fallback to the audio-class driver, Bel Canto uses a driver made by Thesycon, which supplies many of the drivers for asynchronous USB DACs -- so I’m somewhat less concerned about ongoing support.

Once I’d installed the driver on my Intel H61 desktop computer running Windows 8 Professional and Ubuntu 12.04 LTS (both 64-bit), foobar2000 showed the uLink as an output option available in three modes: ASIO, WASAPI event, and WASAPI push. Bel Canto recommends WASAPI event, so I went with that. In the single page of included instructions, Bel Canto warns that system volume control would be disabled, but I didn’t find this to be the case. Nonetheless, I left the application and system volume controls at 100%, and managed the volume with the C7R receiver. The C7R, which reports the digital sampling rate it receives, correctly indicated the rates of the various files I sent it, which ranged from 16/44.1 to 24/192, indicating bit-perfect playback, as claimed.

Because most of my lossless music files are at sampling rates supported by the e.One C7R’s built-in USB input -- 44.1, 88.2, and 96kHz -- I listened to the renderings of both the C7R and the uLink via foobar2000 in WASAPI event mode. Between using the uLink and connecting USB straight into the C7R, the uLink provided cleaner, more distinct sound with greater bass control. With Osmo Vänskä and the Minnesota Orchestra’s recordings of Sibelius’s Symphonies Nos. 2 and 5 (24-bit/96kHz FLAC, BIS/eClassical), there was greater clarity in the swirling strings of Symphony No.5’s third movement, Allegro molto -- Largamente assai, which sounded comparatively messy when I bypassed the uLink; and the bass pizzicatos had cleaner attacks and decays with the uLink in the chain. The uLink’s key features were clarity and low noise. The C7R provided a softer shape to the plucked notes in Anders Miolin’s Debussy Arranged for Ten-Stringed Guitar (16/44.1 FLAC, BIS/eClassical); through the uLink, they were crisp, clean, and delicate, with dynamic attacks and decays.

Tori Amos’s concept album Night of Hunters (24/88.2 FLAC, Deutsche Grammophon/HDtracks) -- a song cycle, really -- opens with “Shattering Sea,” which encompasses a depth of instrumental layers, primarily left-hand piano and a string ensemble, the Apollon Musagáte Quartet. The uLink provided better imaging of the complex call-and-response leitmotif, firmer bass control, and a more accurate piano timbre, which resonates across the soundstage. The texture of the lead vocal was more detailed -- rather than merely light, it became ethereal. “Battle of Trees” begins with resonant percussive decays which were a bit muffled through the C7R. Through the uLink, these were distinct and pleasingly blended with the voices of celli, piano, and lead singer. The uLink made the music more involving. Where the C7R pushed at the rhythmic figures without quite getting there, the uLink brought them to fruition. 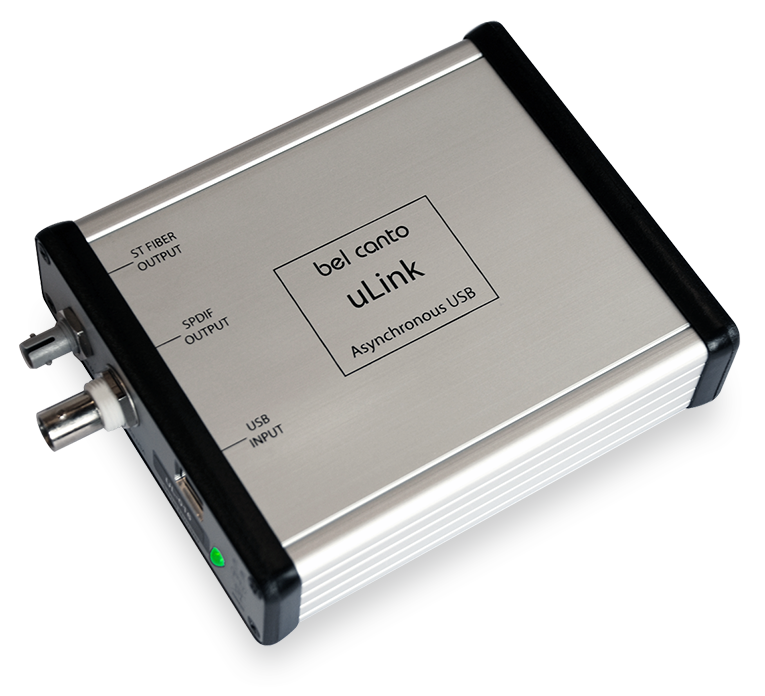 Similarly, with Sonny Rollins’s Tenor Madness (24/96 FLAC, Prestige/HDtracks), the uLink offered a tighter ensemble, with greater control and more distinct notes in the rapid saxophone patterns. The decays were less precise through C7R, which smeared together the fast sequences. With the uLink, I could discern the pitches of Paul Chambers’s double bass in the title track; with the C7R, it just boomed. Furthermore, the uLink provided truer hi-hat strokes from drummer Philly Joe Jones, and more tonal depth in Rollins’s tenor sax.

Foobar2000 won’t play 24/176.4 or 24/192 tracks through the C7R without conversion, reporting “Unsupported stream format.” Admittedly, most of my collection is at 96kHz or below, but higher-resolution tracks are becoming increasingly available. The uLink presented rich fanfares and congestion-free reproduction of the full orchestration and complex soundstage imaging in "Nimrod," from Elgar’s Enigma Variations, in a 1978 live recording by the Houston Symphony Orchestra conducted by Lawrence Foster (24/192 FLAC, RCA/HDTT). It was clean, detailed in imaging and tonality, and with no obvious rolloff -- in the latter sense, it sounded “analog,” like the original master tape -- and even provided the essence and openness of Houston’s Jesse H. Jones Hall for the Performing Arts.

For those who like to play digital music files on computers, Bel Canto Design’s e.One uLink is a worthwhile upgrade to the e.One C7R, allowing bit-perfect reproduction of tracks sampled above 96kHz. For those with DACs lacking USB inputs, the uLink provides an easy and musical way of adding computer-based audio to a system. More important, as an asynchronous USB converter, it improves performance at the lower and more common sample rates of 44.1, 48, 88.2, and 96kHz in clearly audible ways, reducing noise and thus increasing clarity. It’s perhaps surprising that sending signals through an additional step and an additional box full of circuitry can provide superior sound -- but I never once preferred feeding the e.One C7R directly from the computer to using the e.One uLink to mediate between them.