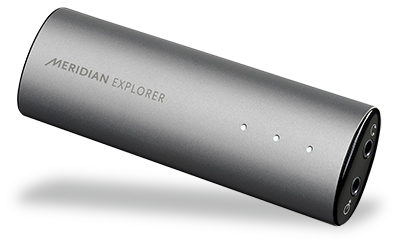 Meridian Audio was founded in 1977 in the UK, by Bob Stuart and Allen Boothroyd, to make high-performance audio products, beginning with a preamp, a power amp, and an active (i.e., self-powered) loudspeaker. In 1989 they introduced the first digitally driven active speaker, and in 1990 the first speaker with onboard digital signal processing (DSP). Meridian also developed and licensed Meridian Lossless Packing (MLP), the standard data-compression codec used in the DVD-Audio format and in Dolby TrueHD soundtracks. Today, Meridian manufactures digital-active speakers and digital and analog components designed to work together as a system, as well as personal and network audio products.

Meridian’s Explorer USB digital-to-analog converter ($299 USD), designed and made in the UK, looks a bit like a jumbo Bic butane lighter with a body of silver-gray aluminum just 4”L x 1.25”W x 0.75” thick and weighing less than two ounces. Power comes from the USB connection -- no outboard power supply is needed. Three LEDs on the top surface indicate the incoming sample rate. At one end is a mini-USB connector thicker and narrower than the connector commonly used on smartphones. Meridian supplies a short USB cable with a matching USB connector on one end, and a USB Type A connector on the other end, to plug into a computer. Because the best USB cables I have here both have the square Type B connector on the DAC end, I couldn’t use them with the Explorer, so I used Meridian’s cable. At the Explorer’s other end are two mini jacks: one, with variable volume, for headphones, the other a combination TosLink optical output and fixed-level analog stereo output that glows red from the LED that transmits optical data through a TosLink cable. I used both of these outputs.

The Explorer’s list of features is impressive for a DAC only 4” long. Meridian says it packs the small, six-layer circuit board with the same high-quality components found in its other digital products. Unlike USB DACs that downconvert high-resolution digital files to 48 or 96kHz, the Explorer’s DAC accepts digital files with sample rates up to 24-bit/192kHz, though its TosLink optical input is limited to 96kHz. The Explorer operates asynchronously: it controls the flow of data from the computer rather than the other way around. Meridian says the Explorer’s analog circuitry is carefully isolated from its digital circuits. The headphone jack’s volume is controlled in the analog domain, to avoid the digital-domain loss of resolution as the volume is decreased. The Explorer’s high-precision dual oscillators (for the data clock required for asynchronous operation) are based on components and designs used in Meridian’s top-of-the-line Reference components, which sell for well over $10,000 each.

The Meridian Explorer did a great job of putting some life and excitement into my AKG K702 headphones, which are usually difficult to perk up. I was struck by the spacious sound -- which may seem odd to say about headphone listening, since the sound happens inside the head. The overall experience with the Explorer was a little less inside my head than I’ve experienced with other DACs that have headphone jacks, but it still wasn’t close to the much different sound of loudspeakers.

Adjectives that came up again and again as I listened to the Explorer through headphones were facile, agile, and quiet -- the Meridian’s noise floor was notably low. That quietness made for a more engaging listening experience in which I could focus more on musical textures, the silences between notes, the drama in the music. The facility and agility came via better reproduction of the bass octaves, precise localization of sounds, and an excellent sense of speed in transients. 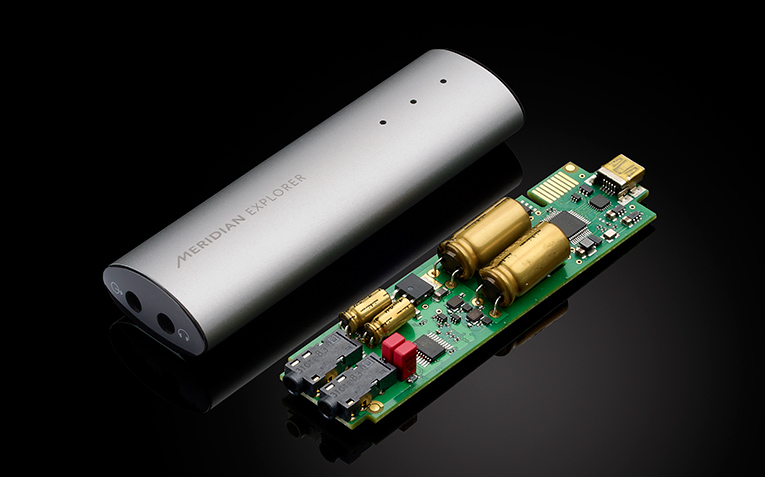 Listening to the Corrs’ Forgiven, Not Forgotten (16-bit/44.1kHz FLAC, Atlantic), the voices of the three Corrs sisters, whether singing solo or in harmony, were exceptionally attractive, sonically and emotionally. The Explorer conveyed more of the conviction, longing, sorrow, and joy than I could recall hearing before through the AKGs. The album’s mix of traditional Irish melodies and modern electric pop may seem a recipe for disaster, but the album, which is predominantly pop, is considerably more heartfelt than most popular music of the last 20 years. The Corrs’ voices were reproduced so seductively and gracefully that it was impossible to listen passively. My K702 ’phones sounded better with the Explorer than with other DACs.

The Crash Test Dummies’ first album, The Ghosts That Haunt Me (16/44.1 FLAC, Sony/BMG), was nicely rendered by the Explorer, with great placement of images -- each sound emanated from a unique location. The sound was open, no doubt due to the DAC’s very low noise floor, which allowed individual and complex sounds to float in air rather than feel as if painted on a scrim. The violin was clean and clear, with great pop when a string was plucked. Following individual instruments was a breeze through the Explorer: Even as one instrument faded and another became more prominent, I could still easily follow the first. Brad Roberts’s deep voice was authoritative and full, with great clarity, and just the right feeling of restrained power. 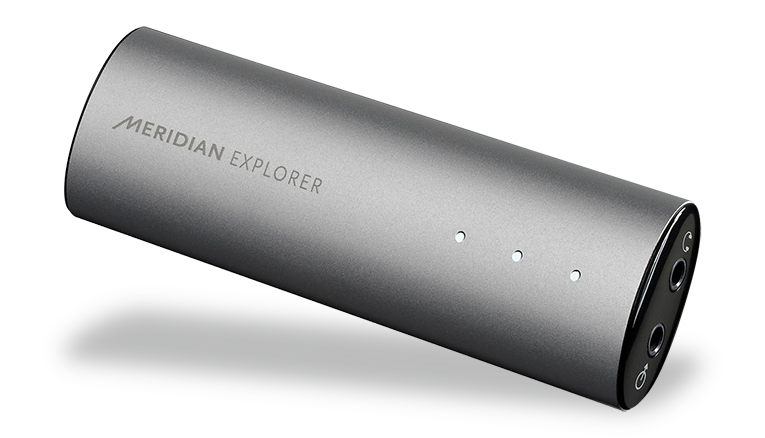 The Explorer will play files with sample rates above 96kHz without downconverting them to 96kHz or less. Listening to a PCM rip of the Rolling Stones’ Let It Bleed (24/192 FLAC, ABKCO), I instantly knew I was hearing “Gimme Shelter” as never before. Most of the improvement was in the midrange and higher, where clarity and transients were stellar. The noise floor remained very quiet, allowing all sorts of subtle textures and variations in transients to be audible and nuanced. Each note had a character more unique than I remember ever hearing. If you’re into hi-rez music files, you’re missing some of the advantages of the 176 and 192kHz sample rates if your USB DAC is limited to 96kHz or less. Hearing my hi-rez files as they were intended to be heard for the first time was an addictive experience that went on for days, as I explored everything I had at the highest sample rates.

The level of the Explorer’s output signal is much higher than that of AudioQuest’s DragonFly v1.0 USB DAC ($249 when available; replaced by the DragonFly v1.2, which costs $149, but I have not yet tested it). Perhaps that’s a function of the Explorer’s larger size, which permits the inclusion of beefier power-supply components. A photo of the Explorer’s circuit board shows a comparatively large storage/filter capacitor that simply couldn’t fit inside the much smaller DragonFly. The Explorer’s output level is even further beyond that of my other comparison DAC, Wavelength’s battery-powered Proton ($900).

I took great care in matching the volume levels of the three DACs, using a 315Hz test tone and a voltmeter. A voltmeter is far superior to an SPL meter, since even small changes in placement of the latter can lead to differences in readings of several dB -- and without specialized measuring equipment, it’s almost impossible to match SPLs when using headphones. It’s not surprising that the Proton’s output level was the lowest -- it draws less energy from batteries, which helps it last for 30 hours or so per charge. The Proton’s output level required a little more amplification from the preamp to get it percolating along like the other two DACs.

Comparing the Meridian Explorer to AudioQuest’s stellar DragonFly v1.0 USB DAC revealed that the DragonFly, which tops out at 96kHz, still sounds as musical as all get-out. There was nothing off-putting or unenjoyable about the AQ’s sound -- I could easily listen to it exclusively and be perfectly happy. But the Explorer sounded better. The three main characteristics of the Explorer that I mentioned earlier -- agility, facility, and quietness -- leapt out in high relief in direct comparisons. The Meridian better controlled my 62-ohm AKG headphones -- especially in the bass, where it made the AKGs come alive -- while the DragonFly just made useful, enjoyable bass. The Explorer’s sound was simultaneously more dynamic and more nuanced. After having heard it so many times with less impact, the whack in the middle of the Stones’ “Midnight Rambler” (also from Let It Bleed) was almost shocking. The Explorer could start and stop sounds seemingly instantaneously -- other USB DACs I’ve reviewed seem to suffer from a bit of inertia. No other $300 USB DAC I’ve heard gets so much of the music from the digital domain into my analog hearing system as well as the Explorer did. 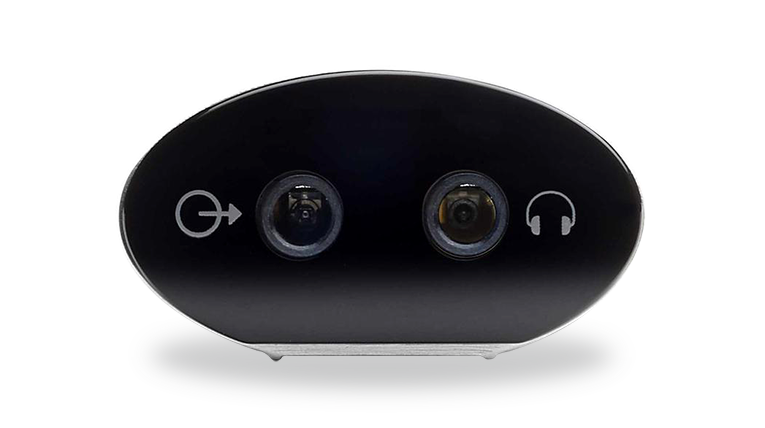 Wavelength’s more expensive Proton ($900), a USB DAC in a small box rather than a small, ultra-portable device like the DragonFly or the larger but still small Explorer, produced sound that was not so clearly inferior to the Meridian’s. The battery-powered Proton was a bit less dynamic than the Explorer but sounded even richer and more musical, with an even lower noise floor -- but you’d expect that for the difference in price. I preferred the Proton’s more refined sound with recordings up to 24/96, the highest rates it supports. While the Proton downsamples 24/176.4 and 24/192 to 24/96, the Explorer natively decodes 24/176.4 and 24/192 files, which gave it an advantage in clarity and detail that it didn’t have at lower sample rates. The Explorer sounded more rambunctious because of its wider dynamic range and big, bright sound. The Proton’s sound had a more suave, effortless slickness that I found attractive and addicting. The sounds were different; neither was a clear winner.

So far, all of my comparisons and comments have referred to the sound of the Meridian through headphones -- but everything I’d said also describes the Explorer’s sound through a high-quality preamp, power amp, and speakers. Now, however, I heard space around me in the room, and the greater harmonic detail I heard with headphones was even more obvious through speakers. Sonic images were bigger in every direction than the AQ DragonFly could manage. Great guitar or string quartet music that I’d thought sounded fabulous through the DragonFly had cleaner, clearer string tone through the Explorer. Nor was this improvement confined to specific recordings. Everything that came out of the Explorer had more meat on its harmonic bones, and sounded exceptionally clean and pure. When it came to reproducing large, believable spaces in my listening room, however, the Proton and Explorer fought it out pretty well.

It might sound as if the giant-killer AudioQuest DragonFly was handily bested by the Meridian Explorer -- but keep in mind that the DragonFly is smaller and doesn’t have the stubby USB cable to deal with. The DragonFly is still a great bargain. If you’re listening in a noisy environment, such as outdoors, that higher noise floor will erase much of the advantage the Explorer will enjoy in a quiet listening room. Still, the Explorer clearly sounded better, overall, than the DragonFly v1.0. But it’s surprising that the Wavelength Proton, a very good DAC that costs three times as much as the Meridian, wasn’t obviously superior in sound. That’s what makes the Explorer a bona-fide high-end bargain. Highly recommended.