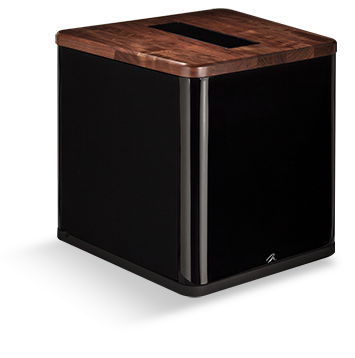 In the eternal quest for the unobtainable grail of perfect sound, we audiophiles will go to extraordinary lengths to reach what can actually be attained: the best sound reproduction possible at the time. One crucial component of that best possible sound is deep bass. But deep bass is also the most confounding and most befuddling aspect of reproduced sound, and the most prone to deliver almost anything but perfection. And try as they might, subwoofer manufacturers, while delivering various types of deep, uncolored, whistle-clean bass, can’t control that one essential component: your room.

We can’t all have a room like Jeff Fritz’s Music Vault -- that audiophile man cave to beat all man caves. Sadly or not, most of us have either jerry-rigged dens or family rooms filled with things -- sofas, chairs, coffee tables, bookshelves, even racks full of audio gear -- that carve the space into gloriously asymmetrical polyhedrons among which soundwaves, especially the long waves of deep-bass frequencies, carom with gleeful abandon. These are not the venues for the perfect reproduction of recorded sound, but with a little help, you can achieve pretty good sound, and perhaps even the best possible.

Besides delivering exemplary LF, MartinLogan’s two BalancedForce subwoofer models offer ML’s own room-correction software, the Perfect Bass Kit. Like other such softwares I’ve used (e.g., the Audyssey system that accompanied my Onkyo TX-NR808 receiver), the PBK compensates for the fact that, unlike Jeff’s Music Vault, your and my imperfect listening spaces were designed for living, not the artifacts of living (music, movies, etc.).

MartinLogan offers the BalancedForce in two sizes: the 210, with two 10” drivers ($2995 USD); and the 212, with two 12” drivers ($3995). After much discussion with me of the size and characteristics of the family room chez ancienne -- that it’s not fully enclosed seemed very important -- MartinLogan felt that the 212 would be a better match. The BalancedForce 212 is my first subwoofer with 12” cones, following an endless parade of 10-inchers. It’s a given that, all else being equal, greater radiating area indicates a greater ability to output sound. I was a little nervous, if only because I’ve had enough problems taming 10” subwoofer drivers, and wondered if two 12-inchers would make those problems only more difficult to solve.

The BalancedForce 212 is a monster. Its nearly cubical but trapezoidal (i.e., only two of its sides are parallel) cabinet measures 19”W (front) x 22.6”W (rear) x 22.6”H x 22.9”D, and weighs a whomping 140 pounds. Two words to home installers: Get help. Don’t try unpacking and moving the BF212 into place by yourself. Your penalty for doing so may include a hernia, a wrenched back, a gouged hardwood floor, or all of the above. Find a buddy, preferably one who’s bulked up a tad, and promise him pizza, a beer, and first choice of a house-leveling action film. You’ll thank me for this. 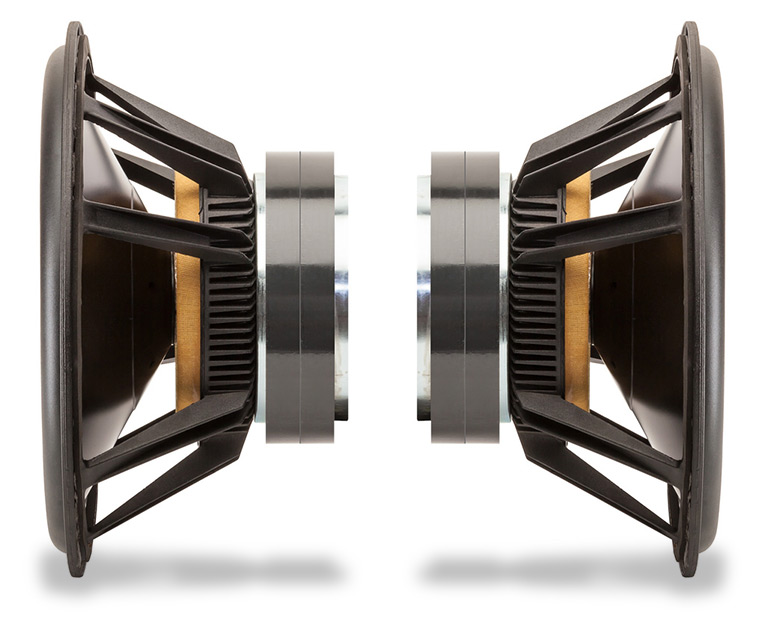 The BF212’s drivers, positioned back to back, have cast baskets and high-excursion aluminum cones, each powered by its own 850W amplifier. The drivers are housed in a sealed, asymmetrical, nonresonant chamber. On the rear panel is a wealth of connections: line-level L/R (RCA) and LFE In (RCA), which connects with the Sub Out on your amplifier; an identical array of inputs for balanced connection (XLR); and speaker-level inputs. A Multi Out jack (RCA) allows you to connect multiple subs, and a Trigger Input lets you turn on the BF212 from another device. Most such triggers are 12V DC, but the BF212 can handle anything from 5 to 24V. There’s a USB Type A port for firmware updates -- MartinLogan includes a nifty thumb drive to facilitate this function -- and a USB Type B mini port for the Perfect Bass Kit connection.

The control panel, hidden under a sleek strip of smoked glass on the BF212’s top panel, has the by-now-common On/Auto/Off switch. On is on, Off is off, and Auto shuts down the sub until it detects a signal. The Level pot controls the overall output. A 25Hz Level pot, calibrated in dB, helps smooth out the frequency response in difficult rooms. You can also use it to tailor the bass to suit your tastes. The Low-Pass Filter, calibrated in Hz, adjusts the low-pass frequencies if you’re using any input but the LFE, in which case the BF212 defaults to your receiver’s bass-management settings. The Phase Control has four positions (0, 90, 180, and 270 degrees), which must be played with to see if changing the phase has any beneficial effect on the sound in your room. The Tone Sweep emits various tones from 20 to 120Hz, to identify troublesome peaks and nulls in your room. The Room EQ toggle engages and disengages the PBK’s room correction. Finally, a Custom Low-Pass Filter can be downloaded from MartinLogan’s website to match the BalancedForce to select MartinLogan loudspeakers.

The optional Perfect Bass Kit ($100) tunes the BF212 to your room. The process is somewhat complex, which I suppose it should be, because accounting for the placement of room furnishings is infinitely variable. You need a PC running Windows XP, Vista, 7, or 8. The software is not compatible with Mac or Linux systems, which is a weakness. We’re a Mac family, and ordinarily would not have been able to use the PBK if it weren’t for the fact that I keep on hand a small ASUS EEE PC netbook running Windows 7 for just such situations.

The PBK includes a microphone and tripod, and two USB cables (Type A/Mini Type B), one each to connect the mike and sub to your PC. As quick and painless as the measuring process is -- it took about five minutes -- getting everything set up can be a lesson in Zen. As is usual with Windows, installation of the software is quaint, including multiple dialog boxes. However, MartinLogan cautions that whenever you relocate the BF212 or change your speakers and/or their positions, you’ll need to run the PBK again. And since you have to check for the most current firmware every time you run the PBK, it makes sense to uninstall.

Running the PBK was a snap. The program directs you to move the mike to five positions, runs its sweep tones, and calibrates the output on a neat graph: You see the program calculate an optimal response curve from the jagged garbage that’s found in almost everyone’s room. In fact, most of the time I spent using the PBK was devoted to moving the mike -- the program is that fast and efficient.

A couple of suggestions for MartinLogan -- in fact, for all manufacturers who use home-computer interfaces to upgrade or deploy their hardware: First, make the installation and operation as transparent as possible to the end user. Some audiophiles, perhaps most, will have some understanding of home computers, how they work, and how to resolve difficulties -- but not all. Second, include onboard documentation (a “Read Me First” file is always a good idea); don’t make your customers guess that they have to go to your website.

MartinLogan strongly suggests that the BF212 be broken in for at least 50 hours before the PBK is installed and used. This period was a terrific opportunity to contrast the sub’s performance before and after room optimization.

While churning through the usual host of bass- and effects-heavy recordings, I found first that the BF212 without the PBK is one whale of a subwoofer. The subterranean note in the bridge of “Orinoco Flow,” from Enya’s Watermark (CD, Reprise 26774-2), rang deep, clear, and uncolored -- one of the few occasions that any sub has done this note justice in my room. Similarly, the opening organ notes of “The Man I Used to Be,” from Jellyfish’s Bellybutton (CD, Charisma 2-91400), finally sounded as if they were emanating from the cathedral they’re meant to evoke. In short, the bass weight, depth, and clarity were incredibly impressive.

However, the musical apogee was Led Zeppelin’s eponymous set of live videos and its glorious rhythm section of John Bonham on drums and John Paul Jones on bass. Oh, yes, you watch and listen to five hours of concert footage to witness Robert Plant’s five-octave vocal range and Jimmy Page’s guitar histrionics, but the treat is how Bonham and Jones hold down the bottom end. The highlights are Jones’s jazz-inflected bass in “What Is and What Should Never Be” and, of course, Bonham’s classic “Moby Dick.”

Yes, I know, drum solos are the bane of everyone’s existence, now that we’ve given up drugs and can hear clearly; but Bonham, unlike too many/most rock drummers, played with a jazzman’s affection for notes. Much like Neil Peart (Rush) and Gavin Harrison (Porcupine Tree), Bonham’s playing echoed the song’s melodic as much as its rhythmic content, and this version of “Moby Dick” is a masterpiece of pace and timing. Throughout these two DVDs, Bonham’s kick drum thundered from the BF212 as if it belonged there. Similarly, Jones’s bass had a resolution that I’d not heard previously, each note clearly defined in a song in which the bass is clearly the melodic center. The MartinLogan BalancedForce 212 was at once articulate and powerful -- a rare combination of abilities in any subwoofer.

Playing the same selections after installing the PBK was interesting. The bass wasn’t necessarily deeper, but it sounded, however subtly, more clearly resolved. That note in “Orinoco Flow” had a harder edge; the organ in “The Man I Used to Be” chimed with a skosh greater authenticity; and Led Zep’s bass and drums rocked just a little bit harder.

I could clearly hear the benefits of the PBK room-correction system. If you’re going to spend $3999 on a subwoofer, you’re serious about sound quality -- it wouldn’t make sense to leave all that technology to the vagaries of your listening room. The PBK makes sense, if only to take the multiple polyhedrons out of the equation.

After much work, sweat, and the vagaries of software installation, my results with MartinLogan’s BalancedForce 212, while not perfect, came pretty close to the best possible bass reproduction. The BF212 is one of those rare subwoofers that can be described as essential. It delivers uncompromised bass with clarity, accuracy, and an utter lack of colorations. Once it’s been tuned to a room with ML’s Perfect Bass Kit, there’s a high likelihood that you’ll never need another sub. Never.

That’s the plus side. The minus side is minimal but merits consideration. This speaker is a behemoth and weighs a ton. It is not easily moved around, and needs to be retuned each time you do so. That said, once you find the optimal location, it will simply perform. You can’t ask for better than that.

Although I was hampered by the inability to make direct comparisons of the BF212 with other subwoofers, it is my judgment that the BalancedForce 212 is in a class with the best subs available to the home-audio enthusiast. The BF212 is one for the short list -- it’s required listening for anyone who’s dead serious about the low end. Highly recommended.