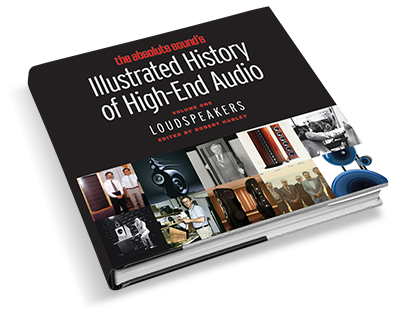 Has the pursuit of the high-end holy grail been a consuming part of your life? It’s been a major part of mine, from high school until the present. But compared to most fields of entertainment, little has been written about the history of the field. Ken Kessler has written several books about specific high-end brands, but until this projected series of three volumes from the editorial staff of The Absolute Sound, no publication that I’m aware of has attempted to cover the high end’s entire industry, and I’m thrilled to see it. Volume Two, on electronics, will appear in 2015; Volume Three, scheduled for 2017, will cover source components.

To create The Absolute Sound’s Illustrated History of High-End Audio, Robert Harley, editor-in-chief of The Absolute Sound and of this series, called on his team of writers from the magazine, and wrote a few of the chapters himself. It’s a handsome coffee-table book: big (12” x 12”), heavy (almost seven pounds), with tons of photos and a first-class printing job. It’s 319 pages long and sells for $129.99 USD. You can buy copies at The Absolute Sound’s TAS Store or at Music Direct.

I asked Harley why he undertook such a daunting project:

The idea was, originally, to interview the founding fathers of the industry while we still could. Many of them started their companies in the 1970s. We wanted to preserve their stories and legacy. In fact, it was originally called The TAS Legacy Project. While thinking about what we would do with the interviews, the idea for creating company profiles with the archival photos, and then creating a large-format book, developed. I made a table of contents of what companies to include, and how many pages should be devoted to each company, and it became apparent that it wouldn’t fit in one book. Rather than omit worthy companies, or truncate the interviews and publish fewer photos, we decided to spread it out over three volumes organized by product category.

Volume One: Loudspeakers is divided chronologically into sections, beginning with “The Pioneers,” which covers the early history of the loudspeaker. Did you know that the first commercially manufactured loudspeaker was the Phonetron, sold in 1921? There’s a chapter on Bell Labs and General Electric, which pioneered the development of loudspeakers. The point is made that the very earliest developments in speakers were made by scientists driven by demands for sound in three applications: for motion pictures, for radios, and for phonographs. There’s a chapter on Alan Blumlein, who developed the theory of stereo recording and made one of the very first such recordings, in 1934: Mozart’s Symphony No.41, “Jupiter,” with Sir Thomas Beecham conducting the London Philharmonic Orchestra. I wonder how long it will be before we hear a high-resolution reissue of that recording? Considering how well companies like Pristine Classical have done at restoring historical recordings, it might be interesting. 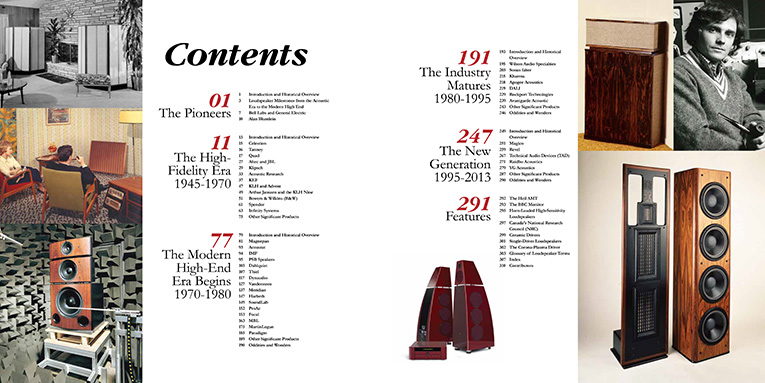 This is followed by four sections, each devoted to particular time period. Each section contains a series of chapters, each covering the history of one of the important speaker makers of that period, many of which are no longer with us; in each section, these are followed by a chapter on “Other Significant Products,” and the last three sections end with a chapter on “Oddities and Wonders,” Here’s what’s covered:

Wayne Garcia’s ten-page piece on Vandersteen Audio provides a good example of how most of the chapters are organized. It opens with a full-page photo of the company’s flagship speaker, the Model Seven, accompanying a summary of Vandersteen’s history and major products. An extensive interview with Richard Vandersteen provides some insight into the founder’s philosophy and goals. A sidebar, “Iconic Product,” describes Vandersteen’s best-selling speaker, the Model 2. Another sidebar, “Tech Focus,” deals with one of the company’s technical advances, the Perfect-Piston Driver Diaphragms. Also included are brief excerpts from TAS reviews of Vandersteen’s Models 2Ce, 3A Signature, and 5. Finally, a two-page timeline graphically displays the significant events in the company’s history. The chapter also includes many color photographs illustrating points made in the text, as well as of Vandersteen’s products, factory, and employees.

With some variations, this format is followed for each manufacturer. Founders who have died are represented by interviews conducted while they were alive, or by interviews with business colleagues or family members. In some cases, such as that of Acoustic Research, not only the founder but the company itself is no longer with us; these sections are shorter.

I’m sure you can figure out what sort of material is in the “Other Significant Products” subsections. The “Oddities and Wonders” chapters include information about interesting but not necessarily significant products such as the Hill Plasmatronics Type 1A, the Pass Ion-Cloud, and Mark Levinson’s HQD System. I hadn’t heard of the Pass Ion-Cloud loudspeaker, which used a radio frequency to create a cloud of charged air particles that could be modulated by the audio signal. Apparently, the high concentration of charged particles, aka ozone, created by the Ion-Cloud sent developer Nelson Pass to the emergency room. As he said to the Wall Street Journal, “It was the perfect high-end audio product: exotic, inefficient, expensive, unavailable, and toxic.”

The “Features” section contains discussions of such technologies as horn-loaded high-sensitivity speakers, or iconic products like the BBC monitor (both of which trigger fond memories for me). There’s also a chapter on Canada’s National Research Council (NRC), in whose labs the SoundStage! Network measures the speakers we review.

The sheer volume of information presented is daunting. I found it best to digest it in small doses -- a few manufacturers at a sitting. And although I’ve been immersed in audiophile developments throughout much of the period covered by the book, I learned a lot. I’m thankful that Harley didn’t try to cover all of high-end audio in a single volume -- I’m not sure I could have lifted it.

Audiophiles love to complain about the price of audio gear, and it wouldn’t surprise me to hear complaints about the book’s price. But a book of such high quality is expensive to publish, and with only two outlets, it’s unlikely to become a best-seller, and I doubt there’ll be a paperback version. There’s nothing else like it anywhere, at any price. And come on, how much did you pay for that last power cord?

Whether you’re a lifelong enthusiast of high-end audio or a recent arrival,The Absolute Sound’s Illustrated History of High-End Audio, Volume One: Loudspeakers is a unique and invaluable source of information about the development of the loudspeaker. I greatly appreciate the immense amount of work Robert Harley and his staff have clearly invested in compiling this beautiful book, and can’t wait to read the next two volumes.