Americana from a Distinguished Independent 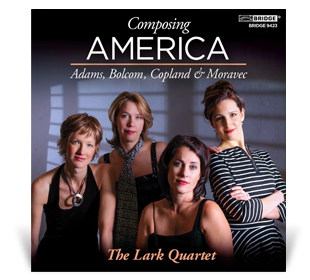 While this department is mostly concerned with important recordings from the past -- some of which have been reissued more than once, and others that ought to be (and meanwhile are well worth hunting for) -- it happens from time to time that an entirely new release identifies itself instantly and unmistakably as a certifiable “Keeper.” It appears that a disproportionate number of such releases come from “independent” labels, a trend more conspicuous than ever now, when major labels we had assumed would be with us forever have been disappearing -- some absorbed by other firms, with varying chances of survival for the catalogs they had built up, some simply gone.

The release that provoked these thoughts came from Bridge, earlier this year. It’s a striking example of the instant “Keeper,” a CD on which the Lark Quartet, with some excellent “assisting artists,” performs four significant works under the collective heading “Composing America” (Bridge 9423). The one familiar item is Aaron Copland’s Two Pieces for String Quartet; the newer ones are John Adams’s Five Pages from John’s Book of Alleged Dances; William Bolcom’s brief but stunning Billy in the Darbies, and Paul Moravec’s very substantial Piano Quintet.

Among American labels today, Bridge, a family operation headquartered in New Rochelle, New York, is definitely one of the most remarkable in its scope, its overall commitment and its judgment. The company came into existence in 1981, in time for the transition from LP to CD as the basic medium for recorded music, and has built up a catalog of more than 400 releases, beginning with a solo recital by its founder, the respected guitarist David Starobin.

It is by no means unusual for an “independent” company to be organized and operated by a musician or musicians, but few have gone about it with the discernment and breadth of enthusiasm that Starobin and his family have done. David Starobin never regarded Bridge as a mere outlet or promotional tool for his career as a performer. The label’s catalog reflects certain emphases -- American music, contemporary music in general, the rescue of various important recordings from the past, an occasional nod to still other categories. The bygone giants of the industry displayed this sort of focus, but Bridge has gone them one better by getting into the area of “artist management”: arranging bookings for some of its performers, and commissions for some of its conspicuously favored composers.

There have been changes in the company structure, but it has remained a family operation. While David Starobin continues to be active as a performer, producer, and A&R chief, he was succeeded as company president a few years ago by his similarly enthusiastic and discerning wife Becky, and both their son Robert and their daughter Allegra are active in the company now. So far, not a single item has been dropped from the company’s active catalog, and its release schedule appears to have been stepped up considerably in the last year or two. 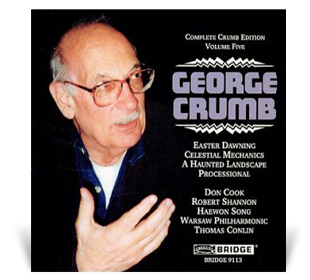 The management operation was a natural outgrowth of the Starobins’ all-round commitment to music and the individuals who create it and perform it. The emphasis on contemporary music was a factor from the outset, and today it is stronger than ever. Bridge recently issued its 16th CD of music by George Crumb, and there has been similarly vigorous attention to Yehudi Wyner, and the Danish composer Poul Ruders. The Danish connection has led to a number of recordings in a broader repertory by the versatile Odense Symphony Orchestra, in varied repertoire and under several conductors.

The late Peter Lieberson is another American composer represented on Bridge, which has recently recorded additional material for its ongoing coverage of Stefan Wolpe. The sizable and authoritative Crumb collection includes performances by the pianist Lambert Orkis, for whom several of this composer’s works were written, and who is also represented in a collection of Gottschalk pieces (on a period instrument in the Smithsonian collection), and the Sonata and Concerto Richard Wernick composed for him. The mezzo Jan de Gaetani is heard in some of her last live performances. Among other American pianists prominent among recent releases are Garrick Ohlsson (in the Beethoven sonatas), Gilbert Kalish (in Haydn, Beethoven and Schubert) and Leon Fleisher (in an unusually wide-ranging assortment of pieces for the left hand, ranging from Brahms’s arrangement of the Bach Chaconne to pieces written or arranged for Fleisher by Leon Kirchner, George Perle and Dina Koston, to music of Gershwin, Kern and Mompou).

In the “historical” column, there are treasurable items from the Marlboro Festival, and from the long and distinguished series of chamber music programs at the Library of Congress, with the Budapest String Quartet and other famous instrumentalists active in the middle of the last century. One of those was the splendid Artur Balsam, whose memorable recordings of concertos by Mozart, Beethoven and Hummel, for the Concert Hall label, have been revived by Bridge. Nadia Reisenberg is another pianist from that era who is represented on the label now. Several recordings by the Stuyvesant Quartet have been similarly rescued, and there is a collection of NBC Symphony Orchestra performances of compositions of that foursome’s cellist, Alan Shulman. 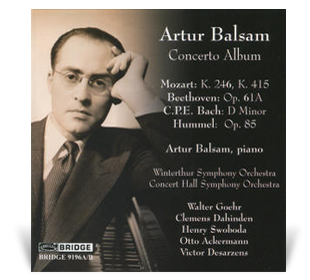 To return to the matter at hand, “Collecting America” is a pointed and effective reminder of where Bridge’s chief enthusiasms lie, in offering valuable examples of contemporary American music for string quartet, with a nod to one of the most significant figures from the recent past, without whose example the three later composers represented here might not have had the impulse or the stamina to embrace the profession they chose. The Copland, a much earlier work than the three others here, was an early work for the composer himself (one piece set down in 1923, the other in 1928), and his only one for string quartet alone. It has of course attained classic status, while at least two of the three more recent items in this collection bid fair to attain that status.

Billy in the Darbies, an impactive demonstration of Bolcom’s productive instincts for the theater, demonstrated in several of his more intimate works as well as his operas, is a text from Melville’s Billy Budd, a scene described by Bolcom himself as “Billy’s sardonic lament at his fate, in handcuffs (‘darbies’), waiting to be tied up and thrown overboard for a crime he did not commit.” This poignant piece, which the Lark Quartet introduced in 2012, with Stephen Salters, the baritone who sings it in this recording, is about the same length as Samuel Barber’s earlier setting of Matthew Arnold’s Dover Beach, also for baritone and string quartet, and perhaps even more effective in its realization of the text.

Paul Moravec’s splendid Piano Quintet, conspicuously longer than any of the other works in this collection, was also composed (in 2008) for the Lark Quartet and the colleague who takes part in this recording, in this case the highly regarded pianist Jeremy Denk. In its richness of mood and contrast, the Quintet is a powerful example of this composer’s limitless resourcefulness and communicative power. I would expect it, in time, to take its place beside the memorable piano quintets of earlier eras, and meanwhile this recording might be just the thing to bring this important composer to the level of recognition and admiration on the part of the broad musical public that he enjoys among his fellow musicians.

Adams’s Alleged Dances, 12 in number, were composed for the Kronos Quartet in 1994, and the composer created a recording of percussion sounds to be used in performances. On the Bridge CD, the Lark Quartet performs five of them, in four of which, with the composer’s approval, the percussionist Yousif Sheronick performs his own interpolations for live participation. The sounds are typically alive with the spontaneity that went into the composition and Sheronick’s ornamentation, but the substance seems a bit thin in comparison with the other works offered here, and the annotation might have been a good deal more helpful.

While the handsomely produced 12-page insert includes individual biographies of the soloists and each of the four women in the Lark Quartet, there is not a word of explication of Adams’s provocative titles. In fairness, however, it must be acknowledged that Nonesuch, in its documentation for the complete Alleged Dances, in its ten-disc set of Adams’s works (79453-2), didn’t provide a word of explication for the movement headings “Judah to Ocean” and “Toot Nipple,” leaving the curious listener to speculate, stew in frustration, or simply wonder whether they have any meaning at all.

In any event, this is an important release, and a reassuring one: music of substance and pleasure, performances alive with authority and conviction, an overall impact both pleasurable and enriching. These are, after all, the factors that add up to the designation “Keeper.”