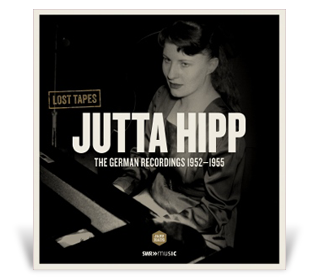 German jazz pianist Jutta Hipp didn’t record much more than a handful of records, and the best known, Jutta Hipp with Zoot Sims (1956), on Blue Note, is the only one that seems to consistently remain in print. For that reason alone, The German Recordings 1952-1955 (Jazzhaus 101821) is a welcome release. A further entry in the growing catalog of Lost Tapes releases from the German Label Jazzhaus and sourced from jazz broadcasts by the German radio station SWR, the 11 tracks on the LP (also available on CD) feature Hipp and other European jazz musicians, including saxophonist Hans Koller, trombonist Albert Mangelsdorff, and guitarist Attila Zoller.

Side 1 comprises a 1952 recording made in Koblenz, and opens with Hipp soloing in Pee Wee Crayton’s “Blues After Hours,” showing a remarkable and fluid command of the blues. Franz Shorty Roeder on bass and Karl Sanner on drums join her for “Erroll’s Bounce,” where she swings Garner’s tune well without merely copying him. Koller joins the group on tenor sax in “Gone with the Wind,” and his style, influenced by Lester Young, meshes well with Hipp’s bop chord progressions. Her solo is angular and melodic, and builds to a strong conclusion before she and Koller bring things to a close. Hipp is also strong in “You Go to My Head” -- Koller is unsteady at points, but Hipp’s solo saves the track. Koller regains his footing in “What Is This Thing Called Love,” which closes the side.

Two tracks from Baden-Baden in June 1953 open side 2, with Koller again on hand, joined by Mangelsdorff on trombone. Koller sounds more confident in both tracks, and his interaction with Mangelsdorff is reminiscent of Stan Getz’s partnership with Bob Brookmeyer. Once again, though, it’s Hipp’s natural ease and her feel for time that explain why she caught the ear of an American label. Her solo in “Come Back to Sorrento” shows the influence of the Modern Jazz Quartet’s John Lewis in its formal complexity and use of counterpoint.

Of the remaining four tracks, recorded in Stuttgart, two feature Zoller, along with Joki Freund on tenor in place of Koller. Sanner is the drummer, and Harry Schell is on bass. Mangelsdorff is on one track with them, and their take on Georgie Auld’s “Daily Double” is great fun, and puts the group’s ensemble talents on display. The LP closes with the group sans Mangelsdorff playing Freund’s “Serpentinen,” and Zoller’s solo is a good example of why he was among Europe’s most highly regarded guitarists. Hipp begins tentatively in “Indian Summer,” the first of two trio pieces from the session, but soon picks up steam to acquit herself well. Her feature in “Everything Happens to Me” is much stronger -- she plays long, flowing lines with ease.

Hipp and Zoller are the standout players on the LP, but Koller, Freund, and, especially, Mangelsdorff contribute good solos. The rhythm sections are solid but unspectacular. In the end, however, any newly available recording by Jutta Hipp is cause for celebration, and The German Recordings 1952-1955 is a worthy addition to Jazzhaus’s Lost Tapes series. 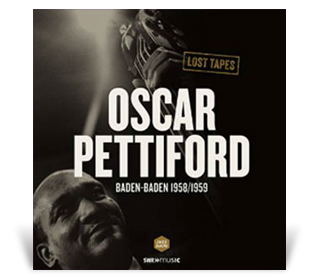 Some of the musicians who appear with Hipp on The German Recordings play with Oscar Pettiford on another Lost Tapes release, Baden-Baden 1958-1959 (Jazzhaus 101724). The great bassist and cellist recorded few sides as a leader, and only a couple of them are in print in the US (a number of others are available as imports). Pettiford moved to Copenhagen in 1959, where he died a year later, at 37. He was a wonderfully fluid bassist whose solos had the ease and melodic invention normally associated with a horn player. Many of the tracks on Baden-Baden 1958-1959 place him in duet or trio settings, which gives Pettiford a central role in the arrangements.

The LP opens with Pettiford in a duet with Serbian trumpeter Duško Gojković. Pettiford’s solo is inventive and rhythmically compelling, but it’s his interaction with Gojković, a noteworthy player himself, that underlines why Pettiford was so highly regarded. He keeps the tune moving, his accompaniment providing the trumpeter with strong melodic support.

Saxophonist Lucky Thompson plays a soulful “Sophisticated Lady” with Pettiford, pianist Hans Hammerschmid, and drummer Hartwig Bartz. Pettiford again turns in a dynamic, well-thought-out solo. He had the speed and agility of a guitarist on the bass, a large, difficult instrument. Hans Koller is on hand for his own tribute to Pettiford, “O.P.” -- he shows a Stan Getz influence in this track, which also features fine work from clarinetist Rolf Kühn.

American drummer Jimmy Pratt plays in “O.P.” and six other tunes here, and swings the music in a natural way most European drummers hadn’t yet learned. Pettiford locks in with him, which seems to give the other musicians, especially Kühn, the freedom to cut loose. Kühn gets a lengthy feature in his own “A Minor Plus A Major,” and his soaring, easy lines are kept aloft by Pratt and Pettiford. The bassist darts around Kühn’s melodies, and Kühn responds with an inspired performance -- as he does in “Poor Butterfly,” another trio arrangement.

Attila Zoller joins Pettiford, Pratt, and Koller in “My Little Cello” and “The Nearness of You.” Zoller was clearly one of the finest postwar European jazz musicians, an inspired soloist with a firm command of jazz harmonies. He and Koller are impressive in both tracks, but Pettiford is the center of things, here and throughout the LP. He plays with a clean, full attack, a strong rhythmic center, and a lively melodic sense. Pettiford solos in every track; each time, his agility, ideas, and careful execution are impressive and engaging.

Both Jazzhaus LPs include an MP3 download in 320kbps if you want to have them in a format you can listen to that's more convenient than vinyl, but Jazzhaus has maintained its usual standards for mastering and pressing LPs, so you’ll much prefer hearing them. The liner notes are informative, though I noted some errors in the personnel listings on the Pettiford sleeve, which doesn’t show Kühn in “Poor Butterfly” but does credit Zoller, who doesn’t appear in that track. Aside from that minor quibble, I hope Jazzhaus continues to release music from the SWR archives. 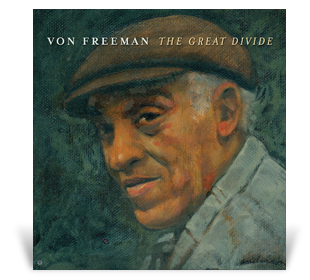 Chicago-based Premonition Records is best known for having released six Patricia Barber recordings admired nearly as much for their recording quality as for Barber’s remarkable music. Premonition was also home to several recordings by tenor saxophone player Von Freeman (1922-2012), a musician beloved in Chicago and well regarded by other musicians. Freeman made his first recording, Doin’ It Right Now, in 1972, with Roland Kirk producing. He went on to record for Steeplechase and Delmark, among others, but never reached the wide audience his son Chico did. He ended up on Premonition late in life -- he made his first album for them when he was nearing 80 -- and now the label has reissued on vinyl his second title for them, The Great Divide.

Freeman knew and admired Coleman Hawkins and Lester Young, and also absorbed Charlie Parker’s innovations. The title of the album refers to his attempt to bring the three players together. I also hear Dexter Gordon in Freeman’s sometimes slow, halting delivery, but his sound really defies comparisons. His run at Sammy Cahn’s “Be My Love” seems to encompass swing, bebop, Ornette Coleman, and more. It takes a couple of listens to catch on to what he’s up to, but Freeman’s emotional integrity and the maturity of his ideas resonate deeply.

“This Is Always” is a beautiful ballad that Charlie Parker recorded with singer Earl Coleman in 1947. Freeman’s depth of experience, musical and otherwise, lets him peel back the layers of meaning in the tune. Lester Young’s “Blue Pres” contains hints of both Young and Ben Webster, but it’s Freeman the master who grabs your ear with his elastic sense of time and his assurance. He never rushes a line or over-emotes. He plays “Violets for Your Furs” unaccompanied, and with such beauty, delicacy, and wisdom that this track is the highpoint of an album that sums up a lifetime of playing music.

Veteran drummer Jimmy Cobb brings his unerring sense of dynamics and time to The Great Divide, and pianist Richard Wyands is a sympathetic accompanist and a resourceful, intelligent soloist. Both musicians were only a few years behind Freeman at the time of the recording -- but bassist John Webber, not yet 30, acquits himself very well in such august company.

Premonition’s vinyl reissue of The Great Divide carves the CD’s ten tracks down to five and emphasizes slower tempos. I don’t own the CD, but I’ve heard enough jazz on disc and vinyl to know that Webber’s bass solo in “Be My Love” has a presence and attack on this LP that CDs don’t capture, and that Jimmy Cobb’s drums resonate into the room in a way that even high-resolution digital doesn’t do justice to. Freeman’s tenor is centered and slightly forward in the soundstage, and you can hear his breath control on the instrument. Wyands’s piano has just the right hint of reverb and openness. Doug Sax mastered the LP from the original 24-bit/96kHz recording, but Sax loves vinyl, and the result is spectacular.

The pressing of The Great Divide, by RTI, is quiet and nicely finished at the edges, the cover is heavy cardboard with a glossy finish, and John Litweiler’s excellent liner notes are in four columns across the back of the cover -- very old-fashioned, and a great joy to read. A very nicely done job for a record jazz lovers will cherish.