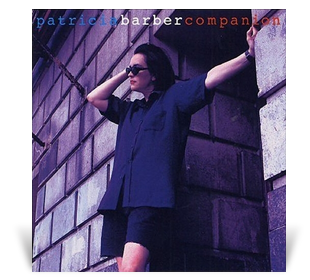 I read about Patricia Barber in the audiophile press long before I saw any mention of her by jazz critics. For that reason, I didn’t pay attention to her at first -- the articles I read seemed to emphasize the quality of her recordings more than her accomplishments as a singer and pianist. Jazz critics eventually did take notice, however, and when I saw a copy of Companion (1999) at a local shop, I decided to pick it up. But while I could hear that Barber was talented, her interpretation of “The Beat Goes On” had a hint of postmodern knowingness. I felt that attitude through much of the rest of the disc, and it kept me at arm’s length.

I began to warm up to Barber when I heard the vinyl reissues of Café Blue (1994, reissued 2011) and Nightclub (2000, reissued 2012). With her most recent disc, Smash (2013), I began to count myself among her fans. Smash showed an openness to influences that pushed Barber, and jazz, into new areas, and it was engaging in a way her other recordings, even the ones I liked, weren’t. Since I’d preferred the vinyl remasters of Café Blue and Nightclub to their CD counterparts, I thought perhaps the new reissue of Companion (Premonition 90762-1), mastered by Doug Sax and beautifully pressed by RTI on two 180gm LPs, might give me a chance to revise my opinion of it.

It had been a while since I’d heard Companion, and this time when I played the CD, “The Beat Goes On” seemed less obviously ironic than I remembered. Perhaps hearing other Barber recordings in the interim had given me some perspective. When I switched to the LP, I liked it even more -- it was less insistent than on the somewhat bright CD. Sax has cut the audience chatter that opens the first few seconds of the CD, so the first thing you hear on the LP is Michael Arnopol’s double bass -- the instrument’s natural wooden resonance is audible.

John McLean’s guitar in “The Beat Goes On” is slightly quieter in this mastering, and sounds better -- it’s a subtler part of the overall arrangement. Ruben P. Alvarez’s conga is behind and to the left of Barber, and all the instruments are in a deeper soundstage behind her, and more precisely positioned. Sax has deepened and widened the soundstage to give more space to all the elements of the recording.

Arnopol’s lengthy bass solo at the opening of “Use Me” has much more texture, richness, and realism on this LP than on the CD. Alvarez’s conga is fuller and more lifelike, and McLean’s guitar is not pushed as far forward -- it seems, again, like a smaller but important part of the whole. In this track as well as in “The Beat Goes On,” Barber’s organ solos are rounder toned, and the other instruments are arrayed more naturally in support of her.

Barber’s voice sounds much less forced in Sax’s new master than on the CD. The LP adds two tracks, including a version of “You Are My Sunshine” that presents Barber, accompanying herself on piano, with a touch of reverb added to her voice. Her singing sounds three-dimensional and more expressive here than on CD because it’s more nuanced, even if more sharply delineated. Sax has given her voice clarity, without the edge and grain that were part of the CD -- in fact, every instrument throughout Companion has benefited from his good ears. Barber’s piano notes in “Like JT” hang in the air and decay naturally rather than ending abruptly, as they seem to on the CD.

Side 4 of this two-LP set is a 45rpm cut of Peter Green’s “Black Magic Woman” (the other three sides are at 33 1/3rpm). No track better highlights the differences between this new LP and the CD. Everything on the CD now seems crammed forward, in contrast to the deep soundstage on the LP, which lets each instrument ring out. The electric organ Barber plays on some tracks is somewhat grating on the CD, but sounds warmer and less aggressive on the LP. It’s also much easier to hear how skillfully McLean handles the volume swells in the intro -- and when the audience claps in recognition as Barber begins to sing, Sax gives us a much clearer picture of the dimensions of the Green Mill, the Chicago club where the performance was recorded.

I can’t say that Companion has jumped to the top of my list of favorite records, but I now like it far more than I did -- Sax’s good analog mastering has brought out the strengths of a great recording and corrected some things I disliked about the CD. This edition of Companion is more obviously a record you can use as a reference for how a live recording should sound. Sax had a good source to work his magic on: engineer and mixer Jim Anderson’s beautifully detailed analog recording. Now you can hear how good it actually sounds. 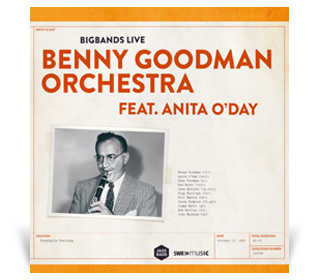 Anita O’Day preceded Barber by a few years -- she was born in 1919 and started singing jazz in 1938 -- and, unlike Barber, she didn’t write any of her own songs. She was a pioneer jazz musician, however, demanding the same respect given other members of the band. She sang with Gene Krupa and Stan Kenton before embarking on a solo career. Her 1981 memoir, High Times Hard Times, and a 2007 documentary, Anita O’Day: The Life of a Jazz Singer, are essential for anyone interested in the sometimes difficult life of a jazz musician. She died in 2006.

In 1959, O’Day toured Europe with Benny Goodman, whose ten-piece band for that series of appearances included West Coast players Jack Sheldon on trumpet and Russ Freeman on piano. Jazzhaus has added Benny Goodman Orchestra feat. Anita O’Day (Jazzhaus 101732) to its series of Bigbands Live releases culled from German radio broadcasts. They’ve released the music on CD and as a two-LP set that includes a 320kbps digital file that includes two tracks not on the LPs.

Goodman’s band is in good form on the first two tracks, “Air Mail Special” and “Honeysuckle Rose.” Sheldon and Freeman bring a touch of modernism to Goodman’s swing-era style, but Goodman and his contemporary, vibraphonist Red Norvo, are themselves quick and agile. When O’Day takes the stage for “Honeysuckle Rose,” with Red Wootten backing her on bass, her sly wit and playful feel for time add an even more modern air to the music. She stretches the rhythm in “Let Me Off Uptown” to add even more fun to the humorous lyrics, then she and Sheldon engage in some playful banter that is a high point of the set.

Benny Goodman Orchestra feat. Anita O’Day contains a good mix of instrumentals alongside the tunes with O’Day. “Body and Soul” is prime Goodman in good swing form, but many of the other arrangements are in a 1950s West Coast style that Goodman easily fits into. The selections show how easily he could shine in any jazz setting without sounding dated. Other soloists, including Norvo, guitarist Jimmy Wyble, Sheldon, tenor saxophonist Flip Phillips, and trombonist Bill Harris, get ample solo time that they use to good effect as they keep Goodman on his toes.

There is so much Goodman available, however, that it’s O’Day who makes this set worth having. Her ease as she swings through “But Not for Me” with the full band, her natural blues feel in “Anita’s Blues” with a smaller ensemble, and her scatting in “Four Brothers” are all prime O’Day, and reasons enough to own this set. She appears on only a third of the tracks, but the great performances by Goodman and his band will hold your attention easily through both discs. The mastering of the mono recording meets the high standards already set by Jazzhaus, and the pressing, by Germany’s Optimal Media, is very good.

While I can’t cover them here at length, I also recommend two other Jazzhaus titles, both part of the label’s Legends Live series. Gerry Mulligan Sextet (Jazzhaus 1017255) is from a 1977 show in Stuttgart with a solid band that includes Dave Samuels on vibes and Bobby Rosengarden on drums. Mulligan is in his usual good form, and the band is outstanding in a set of mostly Mulligan originals. Guitarist Mike Santiago brings a fresher guitar sound to Mulligan’s arrangements, but this performance is pure jazz, not fusion.

Albert Mangelsdorff Quintet (Jazzhaus 101727) is a 1964 performance from Freiburg by the great trombonist, who was one of the very best postwar European jazz musicians. Mangelsdorff wrote most of the tracks, which are edgy and somewhat avant-garde. The European musicians accompanying him are as impressive as the leader, and, like him, should be better known in the US. Both this and the Mulligan LP are well mastered and beautifully pressed.