When my sister Monique mentioned that she’d seen a news story on TV about the resurgence of vinyl, I scoffed: “It’s never gone away!”

I’ve pointed out elsewhere that vinyl has remained surprisingly healthy, but it turns out that the recent increase in sales is noteworthy after all. According to a story in the Wall Street Journal, vinyl sales jumped in 2014 by 49% over 2013, to a total of 9.2 million LPs.

It’s natural to wonder if the current trend will hold, but the important thing is that it has not rolled over and died, as had been predicted and assumed since CDs drove LPs from store shelves in the late 1980s and early 1990s. Not only has vinyl hung on, it has thrived -- something even diehard lovers of the format didn’t expect. Still, even with the recent increases, LPs account for only 2% of sales. The LP is not going to save the record industry, but its continued health means that people like me can still find cartridges, replacement styli -- and records. Even if its current popularity doesn’t hold, history suggests that vinyl will be with us for some time to come.

Signs of the LP’s robust health are everywhere. Quality Record Pressings, Chad Kassem’s new record-pressing plant in Salina, Kansas, has obtained 13 additional presses, and other plants plan to ramp up production. Recently, in New Orleans, my wife, son, and I visited a record shop filled with new vinyl, both reissues and new releases by current bands. When we got back home, we, along with our daughter, visited a nearby music shop on April 18, 2015: Record Store Day. Record companies had pressed some limited editions, some by recent artists, a lot by long-established musicians.

One of the more impressive Record Store Day releases this year was Miles Davis’s The Prestige 10” LP Collection Volume Two, a boxed set of five records, released by Concord Jazz, of recordings Miles Davis originally made for Prestige Records in 1954. (Volume One was released late last November, on Black Friday.) When the LP was introduced, in 1948, labels experimented with different versions of the format, including 10” discs. Each 10” LP contained 20 to 25 minutes of music, and so was roughly half the length of the 12” LPs that would soon dominate the market. The 10” discs were often called Extended Play (EP) rather than Long Play (LP). 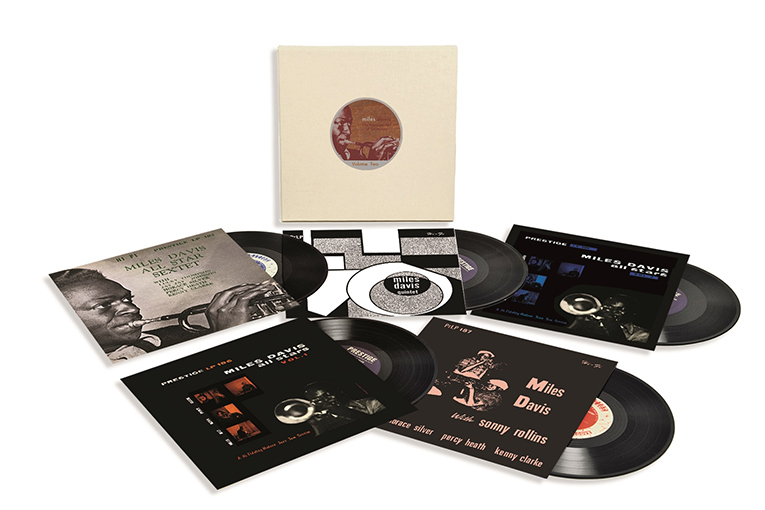 The music on these Miles Davis records -- All Star Sextet; Quintet; Miles Davis with Sonny Rollins; and All Stars Vol. 1 and Vol. 2 -- later turned up on Prestige LPs. All Star Sextet and Quintet now comprise Walkin’, and are credited to the Miles Davis All Stars. I have the CD version of Walkin’, and have always thought that Fantasy Records, which at the time of my CD’s release owned the catalogs of Prestige and a few other jazz labels, had done a good job of mastering. That CD opens with “Walkin’,” by the sextet -- side B of the original EP. I’ve been listening to and enjoying CDs and formats on a new Marantz universal player, which replaced a Cambridge Audio CD player. Digital playback continues to improve, and through the new player even CDs sound as close to good analog playback as I’ve heard. Still, Percy Heath’s bass on the new vinyl edition is just a hint more extended and fuller toned -- chestier, to use a term I think can describe the big sound of a double bass.

Davis’s trumpet sounds sharper, more focused on the new vinyl, bringing him a bit closer to the listener, and the reverb surrounding it and the other instruments is much easier to hear. Kenny Clarke’s ride cymbal in “Blue and Boogie” has more splash and sustain than on the CD, and J.J. Johnson’s trombone has a larger sound that enables me to more clearly visualize the horn’s bell. At the end of the track, the snap of the spring-loaded reverb is clearly audible.

Clarke’s brushstrokes in “Solar,” which opens the Quintet EP, are cleaner and more clearly etched on vinyl, and his taps on snare sound more emphatic. Dave Schildkraut’s alto sax is much more vivid and three-dimensional on this pressing, and Davis’s Harmon-muted trumpet has a more distinct, more rounded tone. It’s easier to hear the harmonic structure of Horace Silver’s piano chords in all three tracks on the EP, and Heath’s bass, as noted above, sounds more full and authoritative.

The music on both volumes of All Stars would later end up on two Prestige LPs, Bags Groove and Miles Davis and the Modern Jazz Giants. Milt Jackson’s vibraphone has more openness and resonance on the EP than on the CD. It’s also much easier to hear Thelonious Monk when he enters at about the four-minute mark to comp behind Jackson. Monk’s solo is more percussive and has far greater impact overall on the new EP.

My copy of Modern Jazz Giants is a vinyl pressing from the late ’80s, mastered by Phil De Lancie, whose work for Fantasy was marked by great taste and a good ear. It was almost certainly digitally mastered, but I’ve always enjoyed its sound -- warm, and not irritatingly boxy, like some digital transfers. A comparison of “Swing Spring” on the LP and the new EP reveals more similarities than differences, but the EP is slightly more detailed, bringing me a step closer to the music. In both cases there’s a palpable spring-reverb snap that’s an artifact of older recordings such as these and, in this case, slightly distracting. Since the newer vinyl is more detailed, the reverb, too, is more present.

“The Man I Love,” from All Stars Vol. 2, sounds fuller and more immediate on the EP, Davis’s trumpet ringing out with more clarity and power and Monk’s piano chords moving forward on the soundstage, to better advantage. Jackson’s solo has more fire, and the impacts of his mallets on the vibraphone bars are audible. Those attacks add tremendous excitement to the music and pull me in more deeply.

The four tracks that comprise Miles Davis with Sonny Rollins are also on Bags Groove, and the EP again has more drive and texture than the CD. Rollins’s tenor sax has tremendous force and grit on the LP, and Silver’s piano lines feed him and Davis with more complexity and greater clarity on this pressing. Throughout all five EPs, the music’s pace and urgency come through with a great feeling of spaciousness and in higher resolution.

The packaging for The Prestige 10” LP Collection Volume Two indicates the care Concord has taken to do these recordings justice. The EP covers are of heavy cardboard with crisply reproduced graphics, and the five discs are housed in an attractive, sturdy, clothbound box. The original liner notes are reproduced exactly as they originally appeared, including misspellings; a single-page insert clarifies recording dates and personnel. My guess is that the records were pressed at Rainbo Records; whoever it was did a very good job. The records are quiet, flat, and cleanly finished at the edges. A lengthy lead-out groove on each record helps to reduce inner-groove distortion.

The mastering, by Paul Blakemore and Clint Holley, is dynamic and very detailed, but some occasional brightness at the top leads me to conclude that the vinyl was cut from a high-resolution digital source. Nonetheless, this is a wonderful set with which to celebrate the joys of vinyl. Concord Music Group has owned the jazz labels formerly owned by Fantasy for some time now, and they’ve kept in print vinyl editions of many of those great recordings. Let’s hope they continue, and that they maintain the standard set by this collection.

The surge in vinyl sales has been covered widely enough that I was surprised to read, in the April 10, 2015, edition of the New York Times, this sentence at the end of historian Michael Beschloss’s tribute to the Beatles’ manager Brian Epstein: “People may not buy many 33 r.p.m. albums anymore, but Brian Epstein lives on.” Beschloss is widely respected, but he or a Times fact checker should have known that people are buying vinyl, including newly pressed Beatles LPs.

The grumblings from audiophiles and record lovers that followed the release of the remastered Beatles albums on stereo vinyl a few years ago must have reached the ears of Apple Records and EMI/Universal Music Group. Those stereo LPs had been digitally mastered; for the mono pressings, Sean Magee and Steve Berkowitz used an all-analog mastering chain and “employed the same procedures used in the 1960s, guided by the original albums and by detailed transfer notes made by the original cutting engineers.”

I have early Parlophone mono pressings in good shape of the other Beatles LPs, so didn’t feel the need to buy the whole set. Instead, I replaced my late-1980s, digitally mastered copies of A Hard Day’s Night and Beatles for Sale, completed my mono collection with Help! and The Beatles (aka “The White Album”), and upgraded my Parlophone mono copy of Revolver. Except for “Here, There and Everywhere” -- on the evidence of groove wear, obviously one of the previous owner’s favorite tracks -- my copy of Revolver is in very good shape.

I’ve lived with several of the new mono LPs for a few months now, and while I never strongly disliked the digitally mastered LPs available since 1987, the new mono pressings are markedly better. They’re more musical, less boxy and edgy, there’s more air between instruments, and the music has a more natural flow. In the one case where I could compare a Parlophone mono Revolver, the sound on the new LP was remarkably like the original, although the earlier pressing had a bit more warmth that I attributed to the tubed equipment used to record, mix, and master those records. 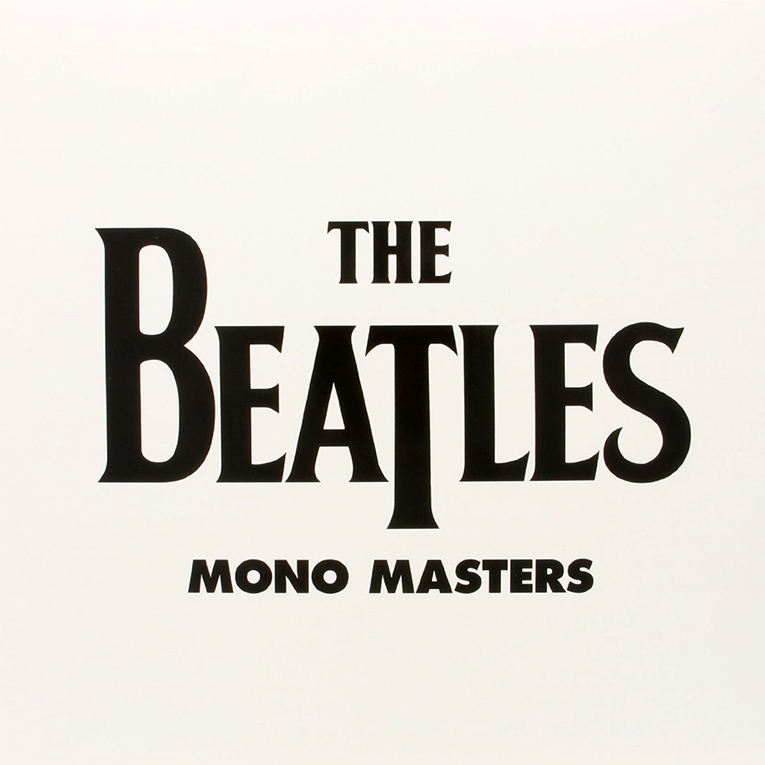 A friend gave me a copy of the three-LP Mono Masters, a compilation of the Beatles’ singles equivalent to the two Past Masters CDs, and hearing the Beatles’ many hit singles in mono provided an opportunity to turn fresh ears to songs I know well. For some albums -- The Beatles, for example -- I prefer the Beatles in stereo, but I often go back and forth, depending on my mood. Mono often brings more focus and a stronger rock’n’roll edge to the first four LPs, but I sometimes turn to mono even for the later albums, especially Rubber Soul.

I have The Beatles in Mono box on CD, and while I find that set enjoyable, these LPs are simply more coherent, and the music sounds richer and more refined. This time, Apple/EMI/Universal have done everything right. Optimal Media in Germany pressed the LPs on 180gm vinyl, and the covers replicate the construction of the originals, though without the high-gloss cellophane finish. These reissues have received almost universal acclaim, and it’s well deserved. 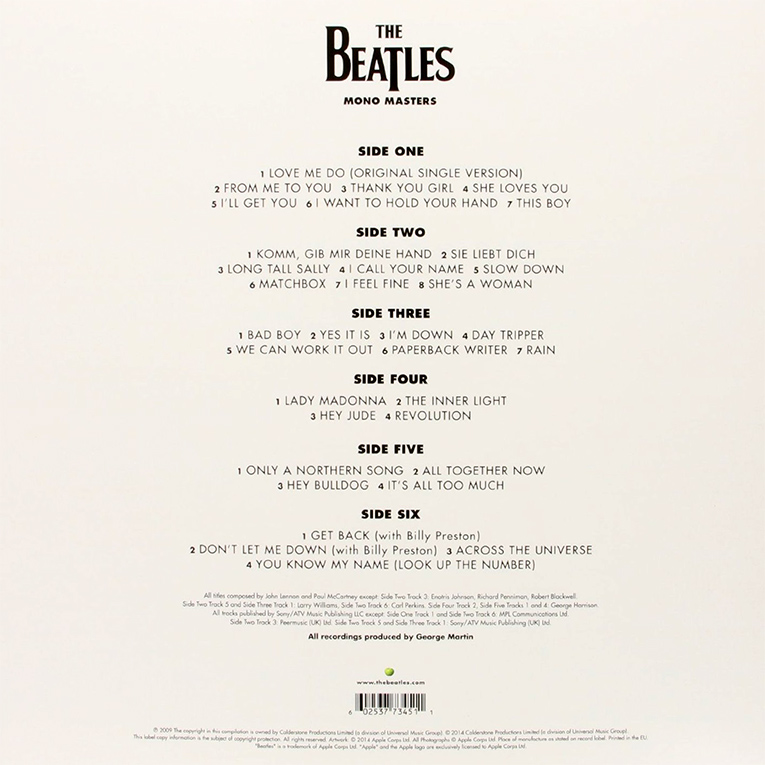 Some advice for playing mono LPs: If you have a mono cartridge, fine. But if you can’t afford or don’t have space for a dedicated mono turntable, you can switch your amp or preamp to mono, if it gives you that choice -- or follow these instructions from mastering engineer Steve Hoffman:

Go to RadioShack. Forget about gold plated anything. You need to buy a “double Y.” The first part of it will be two female plugs on one end with a single male plug on the other. This essentially takes your stereo signal and combines the channels to one. So, plug the interconnect of your turntable in to this. Now, buy another Y cord with a single female on one and branching out to two males on the other. This is just to spread the sound out to your two speakers. Plug the [single] female and [single] male together and plug the two males into your system. You are now in L+R mono.

The difference in the playback of your mono LPs will be clearly audible.