When George Duke died of leukemia in 2013, at age 67, he left behind a large and varied musical legacy. He led almost 40 sessions and was a sideman on many others, including 18 Frank Zappa releases and records by Al Jarreau and Jean-Luc Ponty. While I would have expected to see his name on LPs by drummer Billy Cobham, I was surprised to find him listed on recordings by Michael Jackson (Off the Wall) and Deniece Williams (Let’s Hear It for the Boy).

Duke grew up in California’s Mill Valley, and received a B.A. in music from the San Francisco Conservatory. One evening in 1966, he was playing with a quartet at the Jazz Workshop in a slot normally reserved for Les McCann, who had the evening off. Hans Georg Brunner-Schwer, who ran the German label SABA Records, was in town to record jazz accordionist Art Van Damme. He wandered over to the Workshop to hear McCann and ended up offering Duke a record contract. Later that year, SABA released The George Duke Quartet Presented by the Jazz Workshop of San Francisco 1966.

Duke did two more sessions for other labels before returning to SABA in 1971, which by then had been renamed MPS Records, for Musik Produktion Schwarzwald (Black Forest Music Production). From 1971 through 1976, he would record seven sessions for MPS that documented his unique ability to combine jazz, funk, and rock into intelligent but very accessible fusion.

MPS has collected Duke’s 1970s sessions in a seven-LP set, The Era Will Prevail: The MPS Studio Years 1973-1976. Each of the six volumes is enclosed in a reproduction of the original LP cover, and the set is housed in a beautiful clothbound box. The six albums have been available on CD since 2008, individually and as a four-CD set titled My Soul: The Complete MPS Fusion Recordings. Here I compare those four CDs with the seven new LPs. 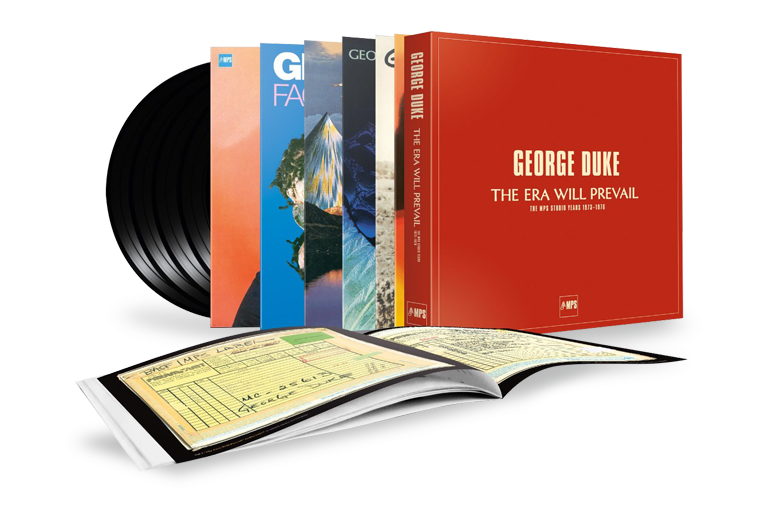 In 1971, Duke was playing with the Cannonball Adderley Quartet when he recorded Solus and, later that year, The Inner Source. MPS delayed the release of the sessions until 1973, and combined them in a two-LP set as The Inner Source (MPS 29 20912-1). Rather than devoting one LP to each session, the producers mixed the tracks. Luckily, they fit well together, despite some differences in instrumentation. Some of Duke’s compositions show Adderley’s gospel undercurrents, but also evident is his interest in Latin American music, especially bossa nova.

The percussion that accompanies Duke in the opening of track 3 of the LP, “Peace,” takes place on this new pressing against a “black” background and a deep soundstage. The sounds of congas and other instruments sustain and echo, and cymbals hang in the air. Duke’s electric piano has a powerfully expansive presence, but each instrument is clearly placed and easy to hear. The music retains its power on CD but is more insistent: Instruments are pushed forward so that, for example, the finger cymbals in the right channel that are part of the overall tapestry call too much attention to themselves.

On LP, John Heard’s double bass sounds appropriately deep and large in “My Soul,” a Latin-jazz piece punctuated by a clever horn arrangement. Duke’s acoustic piano has a ringing tone that pulls me into the music, and I can easily hear Armando Peraza’s hands striking the heads of his congas. Those drums get a bit lost in the CD mix, and the horns are too upfront for the supportive role they’re meant to play. 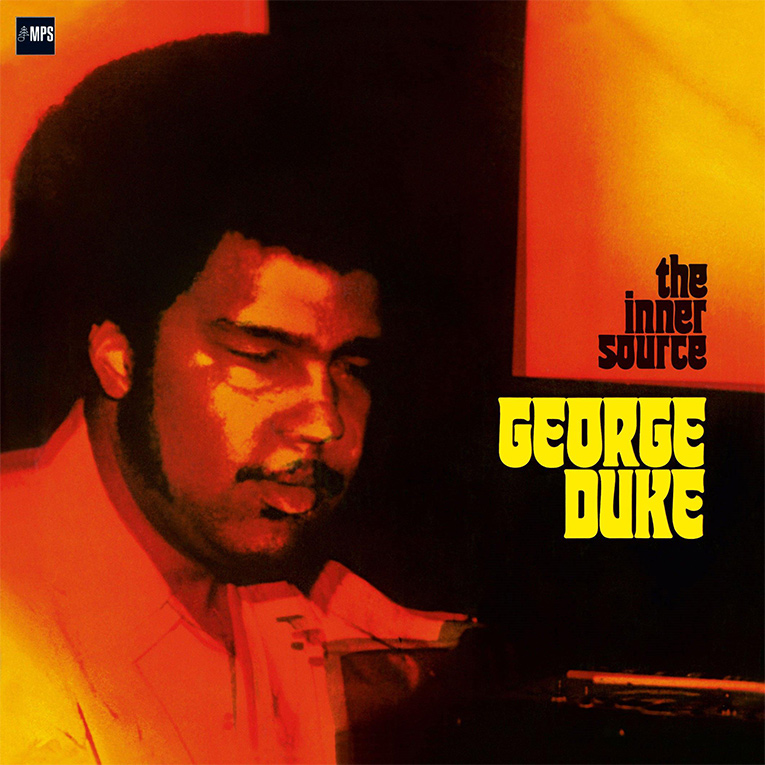 Solus and The Inner Source mingle Duke’s musical interests at that point well, and the producers sequenced the songs from those sessions in a way that makes for two well-paced LPs. The vinyl at first sounded reserved to me, but after settling in, I found that the music flowed more easily and was more airy and natural than from the CD, which sounded somewhat aggressive.

By 1973, jazz fusion was in full flow, and Duke’s Faces in Reflection (MPS 21 22018-4) adds hints of rock and R&B to its healthy gospel undercurrent. Here Duke used a variety of electronic keyboards, including an ARP synthesizer, and sings on some tracks, such as “Capricorn.” In his time with Adderley he seems to have learned how to create music that was groove-heavy and smart at the same time. “Psychocomatic Dung” (his spelling) has long, shimmering electric-piano lines and loopy synth melodies that spread out across the soundstage. Leon “Ndugu” Chancler’s drums are slightly back in the mix on vinyl, but his cymbals have a pleasing ring throughout. 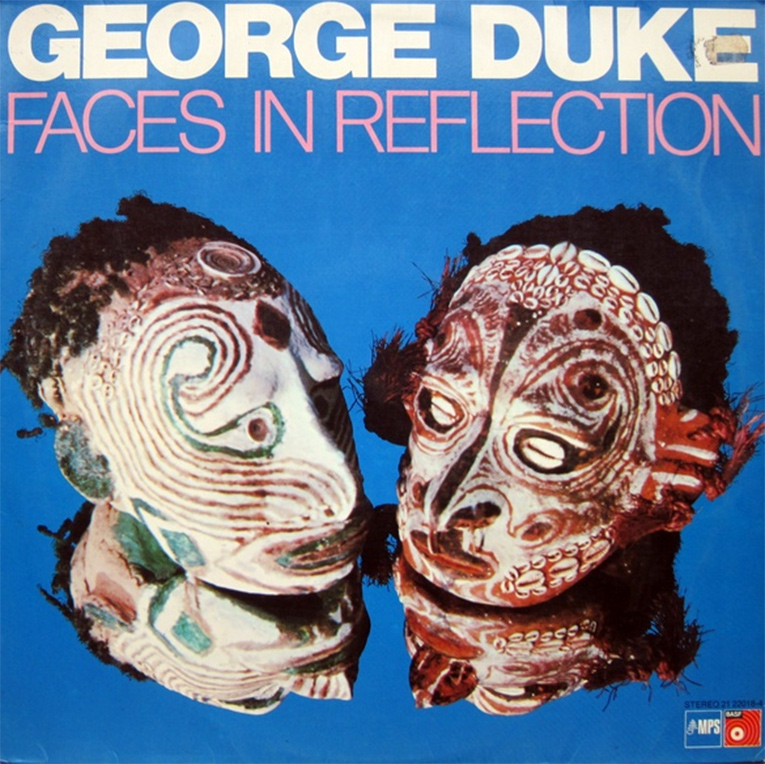 A frantic adaptation of “Maria, Três Filhos,” by the great Brazilian composer Milton Nascimento, is focused and passionate, and Ndugu’s hi-hat accents register solidly on this pressing. It’s easy to hear Stevie Wonder and Earth, Wind & Fire in “Capricorn,” but Duke had already put in time with Zappa, and a rock strain is apparent in “Faces in Reflection No.2” and elsewhere. Duke creates his own fusion of disparate elements, and while it’s easy to hear him aiming for some of the same effects that Chick Corea was using with Return to Forever, Duke was funkier, and his music had a looser, more swinging feel.

Heard and Chancler are on hand again for 1974’s Feel (MPS 21 22312-4), which adds Brazilian percussionist Airto Moreira to six tracks. Duke had played on Over-Nite Sensation (1973) and Apostrophe (’) (1974), two of Frank Zappa’s best-selling albums. The guitarist, listed on the LP credits as “Obdewl’l X,” guests on two tracks. The first, “Love,” features a fine vocal and soulful electric piano from Duke and a searing guitar from Zappa. Duke’s songwriting, like Zappa’s, so deftly combines rock, R&B, and pop that it’s easy to wonder who influenced whom. 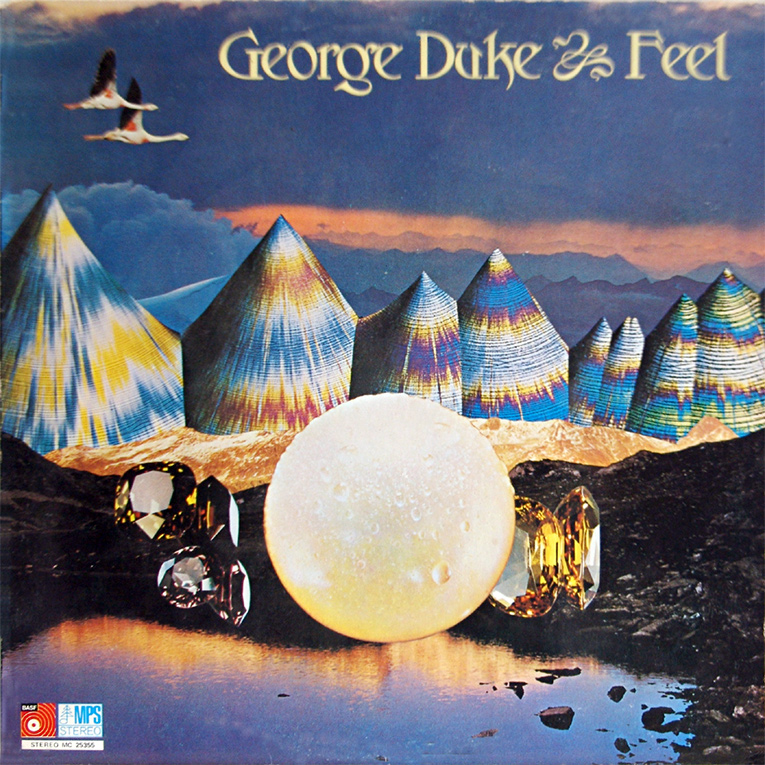 Each of the keyboards in “Funny Funk” has a warmer, more distinct sound on vinyl; the CD’s somewhat aggressive mastering gives them a bright edge. In addition, throughout the CD, instruments are pushed forward in the mix in a way that causes some of the Airto’s percussion to lose subtlety -- it feels intrusive, whereas on LP it clearly plays a supportive role. On vinyl, Ndugu’s bass drum in “The Once Over” is more forcefully deep, and John Heard’s bass has much better low-end thrum. Airto’s percussion in this track is too bright and splashy on CD, while his wit and sense of mischievous fun comes across on vinyl.

I Love the Blues, She Heard My Cry (MPS 17 22700-6), from 1975, boasts a diverse lineup of musicians, including guitarists Johnny “Guitar” Watson, Lee Ritenour, and George Johnson of the Brothers Johnson. It’s obvious from the opening notes of “Chariot” that Duke’s confidence and skills as a singer were growing with each album, as was his ability to mix R&B and rock in an enjoyable stew. He also had a keen ear for the right musicians to use. Johnson mixes blues and rock effortlessly in “Look Into Her Eyes,” Lee Ritenour manages to play rock’n’roll convincingly, and Johnny “Guitar” Watson’s appearance in the title track is worth hearing for his scorching guitar solo and stirring blues vocal. There are plenty of instrumentals on the LP to keep fusion heads happy, including “That’s What She Said,” where Duke shines on electric piano and synthesizer. His acoustic piano establishes a haunting tone for “Giant Child Within Us -- Ego,” which goes off in an unexpected and fast-paced direction that gives Duke and the other players a chance to show how easily they could handle a complex arrangement. I Love the Blues, She Heard My Cry has a deeper soundstage on vinyl that lets me better hear things like the multitracked vocals in “Chariot.” 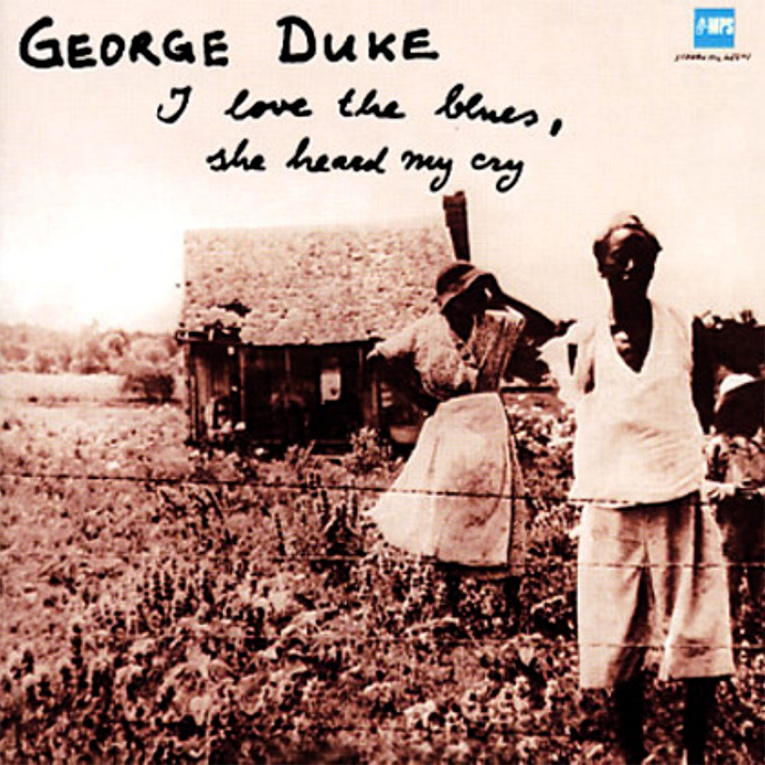 Back in 1975, fusion fans must have been jarred by “Fools,” from The Aura Will Prevail (MPS 20 25613-8). It’s another demonstration of Duke’s fine singing, but it leans more in the direction of ’70s R&B balladry than fusion. Duke doesn’t abandon fusion, however, and Airto is again on hand to provide rhythmic color. Duke uses multiple keyboards to even greater effect to create complex arrangements, and his solos are satisfying even at their flashiest. What often made his music of this period so satisfying were its funk and R&B influences, which often lighten the mood and keep things sounding fresh 40 years later. “Foosh” uses funk with the same intelligence and comfort that Herbie Hancock was showing on Head Hunters and Man-Child. 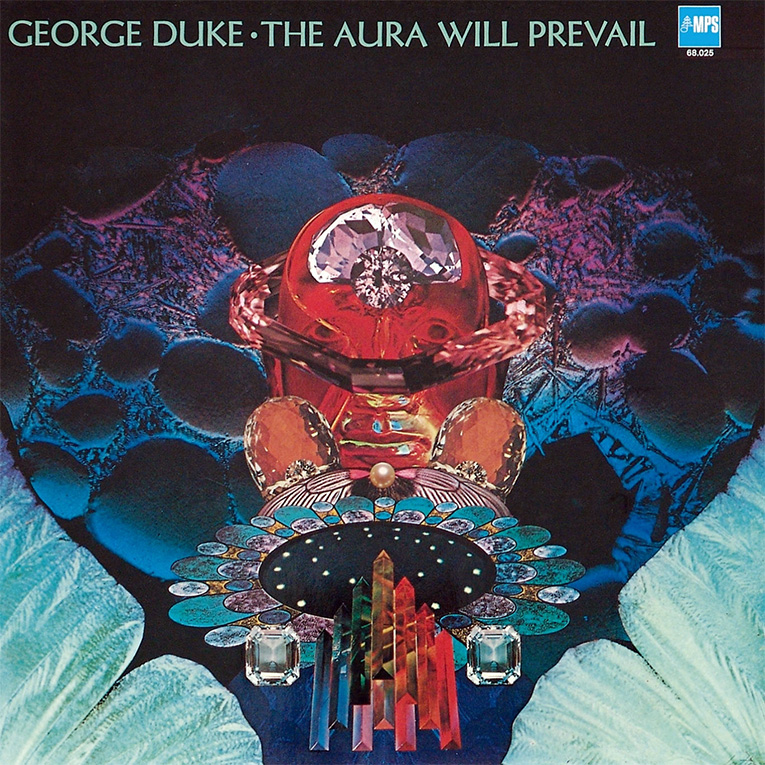 Duke’s experience with Zappa gave him an affinity for rock that even many fusion players lacked. After a fast intro, Zappa’s “Echidna’s Arf” becomes more new-age atmospheric than rocking, but “Uncle Remus,” which Duke co-wrote with Zappa, plays up the tune’s gospel aspects while retaining its rock feel. Airto gives “The Aura” much of its Brazilian swing, but Duke’s electric piano playing makes the track, and while he uses a battery of keyboards here, he doesn’t get bogged down in them, in part because bassist Alphonso Johnson keeps things so buoyant. On vinyl, Johnson and Ndugu Chancler have a stronger low-end presence, and Duke’s vocals are set off better from the rest of the instruments throughout The Aura Will Prevail.

Duke released his final album with MPS, Liberated Fantasies (MPS CC 228 355), in 1976. “Don’t Be Shy” and “Seeing You” moved him further in the direction of funk, which would define the next phase of his career -- it’s hard to understand why he didn’t make a bigger dent in the charts. “Back to Where We Never Left” reminded Duke’s fans that he was still a fusion force to be reckoned with, and let him show off his keyboard and arranging chops. “Tryin’ and Cryin’” is a complex prog-rock number that benefits from a spirited vocal from fellow Zappa alum Napoleon Murphy Brock and a terrific bass line from Alphonso Johnson that comes across with more fullness on vinyl, as do Chancler’s drums throughout. 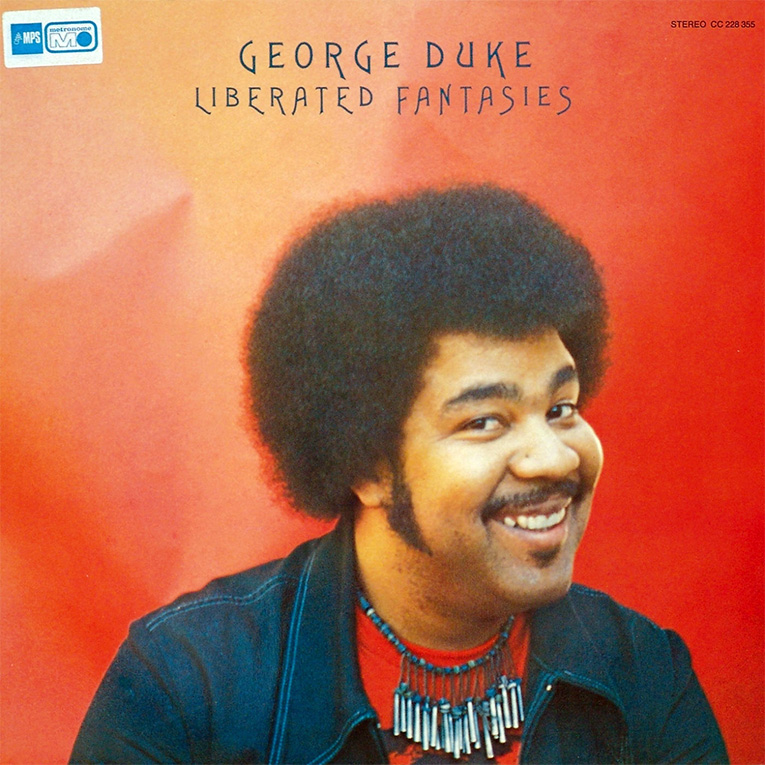 The Era Will Prevail: The MPS Studio Years 1973-1976 is a model for how a reissue on this scale should be done. The rust-colored, cloth-covered box that houses the set is made of sturdy cardboard, and the LP covers, while not of heavy stock, are good quality and feature vivid reproductions of the original cover art. Edel:Kultur, in Germany, oversees the reissue of MPS’s catalog on vinyl, and they’ve used analog at every step of the mastering: these are AAA LPs. The 180gm discs are dead quiet and flat; my guess is that they were pressed by Optimal Media Production, in Germany. A 12” x 12” booklet contains an essay about each recording.

George Duke went on to make many more records, but to me these are among his most consistent and worthwhile. Fusion lovers of the 1970s may have felt that his forays into the funk of that era were commercially inspired, but they give the records a less dated feel than Return to Forever’s or even the Mahavishnu Orchestra’s. Duke is consistently inventive and exciting on these LPs, and the sound on vinyl is deeper and more nuanced than on CD.

MPS has reissued a number of other titles on vinyl, including sets by Oscar Peterson and Friedrich Gulda, and individual LPs by Joe Pass and Ella Fitzgerald. If Christoph Stickel and Dirk Sommer’s remastering of The Era Will Prevail indicates the care they take with all MPS reissues on vinyl, those other LPs will be worth hearing.