Intervention Records, which reissues carefully remastered albums on high-quality vinyl, has a very informative website, but my question for the label’s founder, Shane Buettner, wasn’t answered there: Why Everclear?

“The reason is simple,” he wrote to me. “I LOVE Everclear! I think that they were second only to Nirvana in that genre, and I think those two albums [Sparkle and Fade (1995) and So Much for the Afterglow (1997)] stand with any alt-rock records made in the ’90s. Now, those did have original vinyl. But they were ripped from the CD files, not pressed very well, and because they didn’t make a lot of them they’re expensive and hard to find.

“Add all that up,” he continued, “and these were no-brainers for me. And seriously, start to finish, those are great albums. To me, they’re alt-rock classics, undisputed and very underrated in the sense that most remember these as good records, not great. I seriously challenge that notion!!” 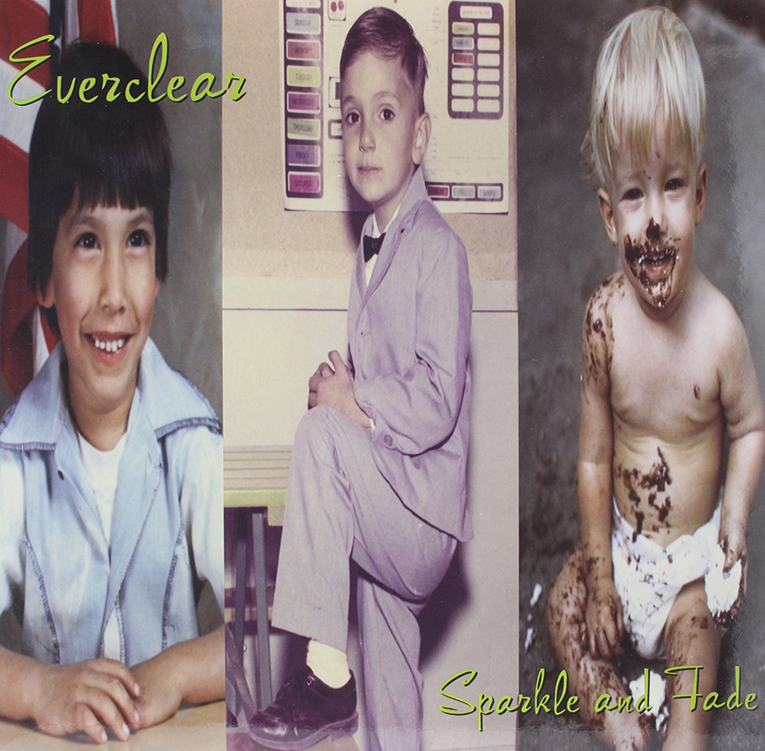 Everclear began when guitarist and singer Art Alexakis, who’d been playing music in Los Angeles and San Francisco, ended up in Portland, Oregon, in the early 1990s, where he hooked up with bassist Craig Montoya and drummer Scott Cuthbert. In 1993, for a local label, the trio recorded an album that Capitol Records reissued when it signed them a year later. World of Noise was lo-fi, but Everclear’s major-label debut, Sparkle and Fade, had better sound, more memorable songwriting, and a new drummer, Greg Eklund. Alexakis produced the album, but shared the writing with his bandmates.

Everclear sang about life’s struggles and the personal turmoil that can follow. Alexakis had had a troubled youth, and his formative experiences gave the songs a bracing, sometimes disturbing honesty. Comparisons with Nirvana were inevitable, but the band’s sound is unique enough that comparisons soon fade.

Kevin Gray of Cohearent Audio mastered Sparkle and Fade for Intervention vinyl from high-resolution digital, and the sound is surprisingly warm and analog. Bob Ludwig mastered the original CD, and it has a lot of drive and a bright sheen that’s right for the music. In “Electra Made Me Blind,” the guitars growl, the drums snap hard. On the LP, instruments lock together more, and Eklund’s kick drum punches harder. The overdriven guitars sound harmonically deeper without losing their edge. 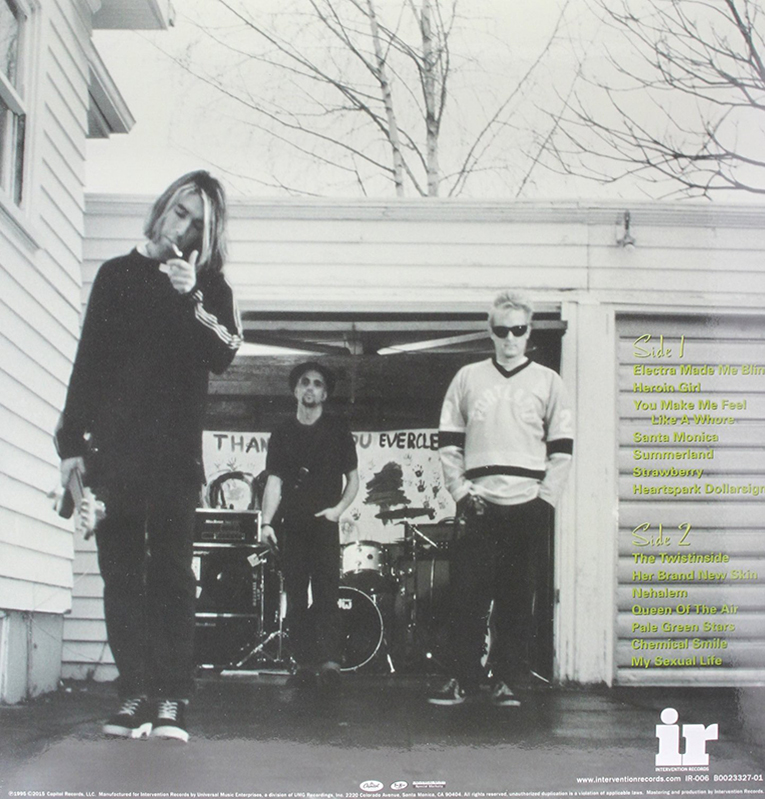 The arpeggios in the opening of “Heroin Girl” sustain longer on vinyl, and Eklund’s backbeat is more prominent than on CD -- and when he hits the toms, they’re deeper toned and more resonant. The guitars are razor sharp on CD, but on vinyl they gain some richness, and Alexakis’s voice has more complexity. Montoya’s bass is deeper and more forward on this pressing, giving the music an extra dimension.

The snare drum in the opening of “Summerland” cracks hard on CD, but the kick drum moves more air and the cymbals sustain longer on LP. The distorted guitars have as much impact on vinyl as on CD but feel less insistent, and the voices are integrated into the flow of the music rather than pushing out in front as they do on CD. Montoya’s bass in “Her Brand New Skin” sounds fuller on Gray’s remaster, with a better sense of attack than on CD.

The new vinyl edition of Sparkle and Fade gives the instruments a bit more depth and room to stretch out. As a result, a track like “Queen of the Air” has more nuance. Throughout this album, the drums have more staying power and bounce, and it’s easier to pick out their different tonalities. Ludwig’s CD mastering better captures the drive of this loud, often fast music, and at times I missed that. But the LP is less fatiguing to listen to; I could enjoy the music without thinking, as I often do with the CD, that I have to be in the mood to hear it. 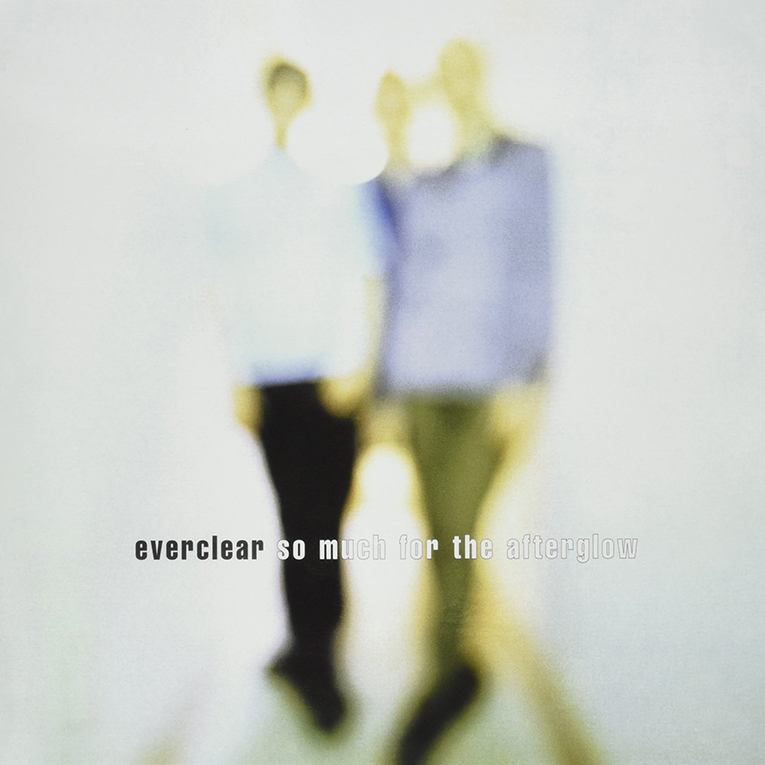 When Everclear went into the studio to record Sparkle and Fade’s follow-up, So Much for the Afterglow, they retained the edge that had made the first record so exciting, but their new songs were more melodic, and the arrangements more varied. Alexakis played guitar, steel guitar, mandolin, banjo, and keyboards; Montoya played bass, mandolin, and keyboards; and Eklund played drums, percussion, and keys. The a cappella voices that open the title track are deeper and more striking on the Intervention edition, and it’s easier to hear the individual voices. The entrance of the feedback and crunching guitars now has greater impact because Eklund’s drums sound so full. It’s also easier to hear how subtle some of the instrumental touches are in “Everything to Everyone,” in which it’s now clear that Alexakis’s guitar trills are behind the other instruments. Setting them off rather than bringing them forward gives the arrangement more interesting depth.

The guitars in “Normal Like You” have a bit less bite on this pressing than on CD, but sound more harmonically complex, and it’s easier to hear the keyboards and voices. The tremoloed guitar in “I Will Buy You a New Life” has more presence, and the acoustic guitars in the background are more audible, which gives the music more life. The tambourine in this track steps out from the rest of the instruments in the mix to add some textural variety. 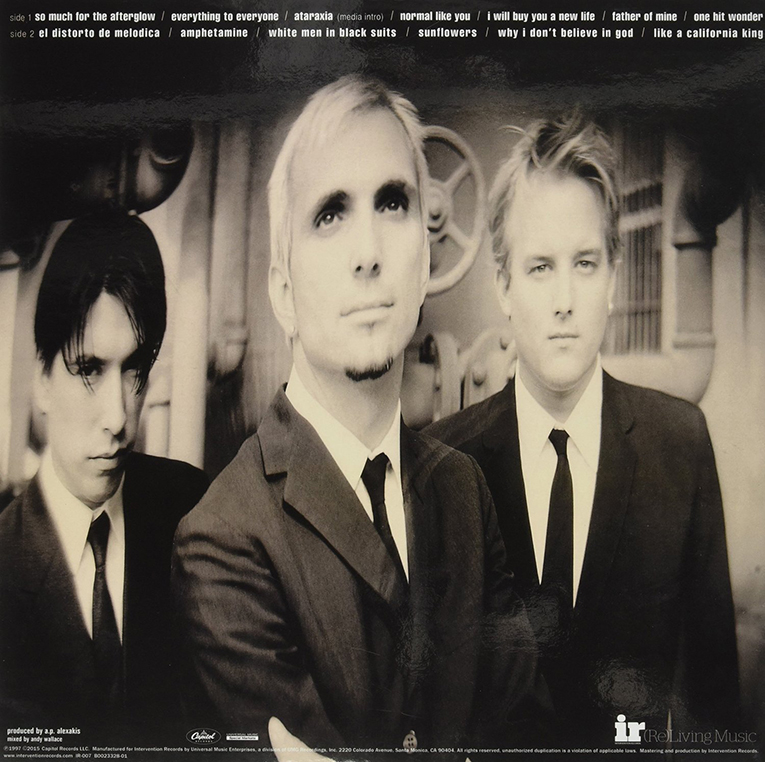 In fact, Kevin Gray’s vinyl remastering throughout So Much for the Afterglow brings out more clearly small details that help open up this music. It’s easier to hear that the guitar riff that begins “White Men in Black Suits” is double tracked, and Alexakis’s guitar triplets behind the vocals sustain longer and have more sparkle. The guitars in “Sunflowers” sound less insistent but more expansive here, and it improves the song. The acoustic instruments in “Why I Don’t Believe in God” sound more natural, and Eklund’s snare is not as aggressively bright.

Bob Ludwig’s mastering of both original CDs captured the headlong roar that made these albums so exciting the first time around, but Gray’s remastering gives them a deeper soundstage and more subtlety. It’s more obvious now that Eklund and Montoya were key to the overall impact of both records. Eklund’s backbeat gives the songs shape and a powerful rock’n’roll pulse, and Montoya firmly holds down the center with great melodic flair. Perhaps it’s time to reevaluate these records, and these pressings are a great place to start: they give greater insight into how much went into them.

When I asked Buettner about Everclear, I noted that many Intervention releases are rock classics, such as the two Stealers Wheel albums he’s reissued. “The Stealers Wheel records aren’t really established classics, but almost underground,” he told me. “‘Stuck in the Middle’ is a classic song for sure, but most people think they were a one-hit wonder and don’t know they made two (arguably three) great records start to finish.” 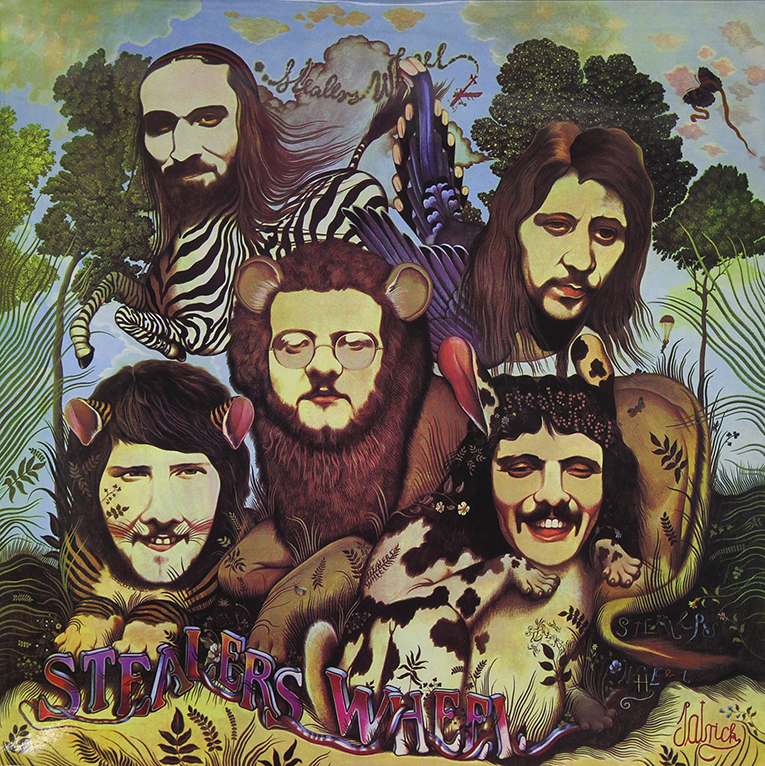 Although Stealers Wheel was a band when they recorded their eponymous debut in 1972, they were really a duo: Joe Egan and Gerry Rafferty. The two grew up in Paisley, a small city in Scotland, and met as teenagers. Rafferty recorded a solo album in 1971, Can I Have My Money Back?, which stiffed. Egan sang on the album and helped write one track, “Sign on the Dotted Line.” They then began writing and recording with a band, but by the time they recorded their first album, they were already using different musicians.

Jerry Leiber and Mike Stoller produced Stealers Wheel, and Geoff Emerick, the recording engineer on the last four Beatles albums, was at the board. With such an impressive pedigree, it’s not surprising that Stealers Wheel is a well-recorded, thoughtfully assembled record. It helped that Egan and Rafferty were accomplished players and that the other musicians -- guitarist Paul Pilnick, bassist Tony Williams, drummer Rod Coombes -- each had a distinctive style.

Kevin Gray remastered Stealers Wheel from the best available analog sources, 1/2" safety copies, and I compared the new Intervention edition with my old A&M pressing from 1973, the year the album was released. The original pressing is notable for its tremendous bass extension (the album is only 34:22 long) and overall clean, balanced sound. It’s good, but the Intervention is better. I can hear the air moving through the harmonium that opens “Late Again,” and when the bass kicks in, it hits harder, with more definition and cleaner attacks. The acoustic guitars have more sparkle, and the background percussion is better integrated into the soundstage. 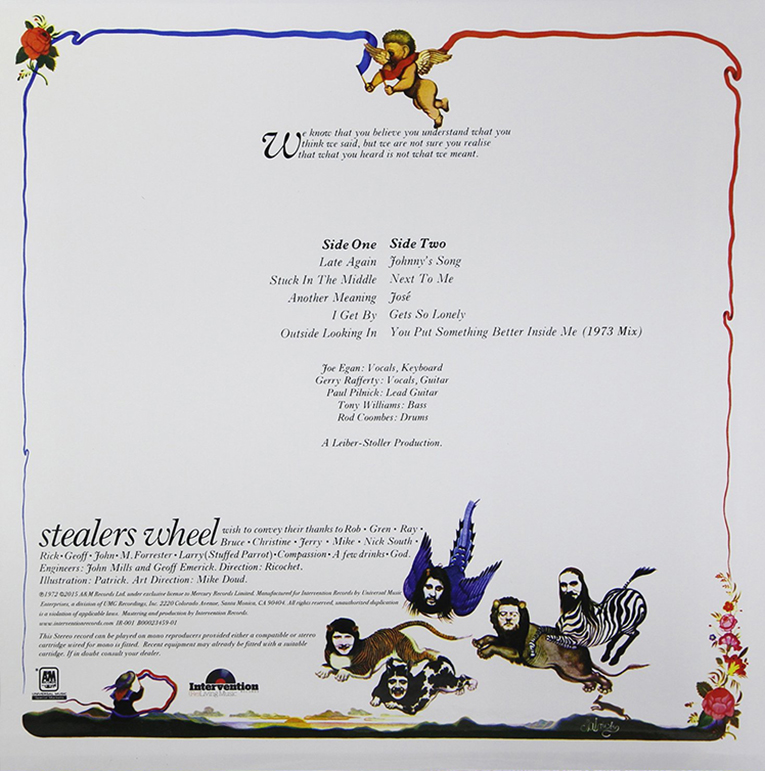 Stealers Wheel is best known for “Stuck in the Middle with You,” and while Egan and Rafferty wrote it as a parody of Bob Dylan, it ends up being an homage. The acoustic guitars in the intro sound fuller on the new pressing, and Rafferty’s voice is more focused and centered. The hand claps throughout ring out with more strength. Pilnick’s slippery slide-guitar lines are more assertive, and in the middle, the cowbell echo in the right channel rings out longer.

For a full-on parody, listen to “I Get By,” in which Egan skewers testosterone-driven boogie blues bands like Bad Company. The guitars have more crunch in the new pressing, and Egan’s vocal swagger is more convincing. His “Another Meaning” has the pastoral quality of the late-’60s Kinks -- the song evinces a real affection for Ray Davies’s songwriting style and, more important, a talent for using it to write a song that stands on its own. The vocal harmonies are more layered on the new pressing, and small touches -- such as the toy-piano lines that run through the song -- are clearer.

The synthesizer lines that open Rafferty’s “Johnny’s Song” have more texture on the new vinyl, and the acoustic piano is more cleanly focused. The guitars shine brighter, and Rafferty’s voice has a more holographic presence. The harmony vocals have much more body and fullness, and the tambourine and hi-hat are clearer and more solidly etched. The drums sound more solid, and Egan’s piano plays a more prominent role.

The percussion in the beautiful ballad “Next to Me,” cowritten by Egan and Rafferty, is more firmly presented here, and the vocal harmonies are more enveloping, and separated in a way that lets you hear how accomplished they really are. The electric-piano lines in “Gets So Lonely” sparkle more and hang in the air longer, and Egan’s voice is more involving. The voices in “You Put something Better Inside Me” are expansive, and the strings and horns are more subtly toned and deeper.

Stealers Wheel has always been a sonically enjoyable record, but Intervention has now given us a version that sounds definitive: Slightly buried percussion is more fully revealed, and Tony Williams’s bass lines are much more powerfully rendered. Voices sound more realistic, and the guitars, acoustic and electric, are presented more clearly. The many subtle details that help make it such a great record are now easier to hear and appreciate.

I was surprised to discover that Shane Buettner was right about Stealers Wheel not being a fixture of classic rock. I knew the duo’s second and third albums, Ferguslie Park (1974) and Right or Wrong (1975), weren’t well known, but I was certain that the first album was well regarded, if only for “Stuck in the Middle with You.” In fact, it wasn’t released on CD until 2004. Stealers Wheel is a masterpiece of good songs and exceptional playing. Listening to it on this great pressing, with its absolutely silent background, makes it clear that it’s a record that stands with the best of the 1970s.

All three LPs reviewed here are pressed by RTI on quiet vinyl with smoothly finished edges. The covers are beautifully laminated in heavy cardboard, and the artwork is reproduced in vivid color. Intervention Records is less than a year old, and so far has reissued LPs by Joe Jackson (which I’ll review soon here), Big Audio Dynamite’s debut, and Ferguslie Park. If you read about Intervention’s philosophy, you’ll know how seriously Shane Buettner takes his vinyl mission. When you hear these pressings, you’ll know he means it.