Getting to Know Scottish Pop and Folk Music Through Digital Download 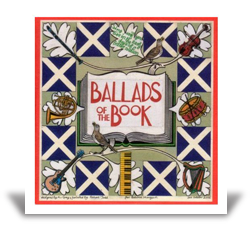 Toward the end of the summer, Linn Records sent me an enticing press release concerning Ballads of the Book and other folk/rock albums by Scottish artists that were now available for download at the Linn Records site. Most listeners are probably aware of Linn Records through their classical recordings, which garnered the company a Label of the Year award for 2010 from the prestigious classical music magazine Gramophone. On their website, however, Linn has paid equal attention to jazz and pop artists, licensing recordings from other labels to fill the gaps so that their overall offering of downloads is well balanced among genres. Linn has always given prime consideration to Scottish ensembles (their classical house band is the Scottish Chamber Orchestra), and their site lists music by a large number of Scottish musicians. Most of these were unfamiliar to me as I started my adventure into Scottish music, but through that journey I’ve come to like and admire a good number of Scottish artists who I look forward to hearing again.

Ballads of the Book was the creation of Idlewild’s Roddy Woombie, beginning as a simple idea to bring together the literary talents of a number of Scottish authors with bands and solo musicians who would set the lyrics to a wide variety of music. The project grew and blossomed into an enormous entity, which was embraced with funding by the Scottish Arts Council. A record was produced in 2007, but it didn’t take off away from home turf; Amazon.com has just a single, one-line review (five stars, though). Hopefully, now that this collection is available on the Linn Records site, more people on this side of the Atlantic will come to know and love the music that centers in Glasgow.

Though the 18 tracks on the complete album download are exceptionally diverse, I think all but one or two cross back to Scottish folk songs. This gives them a unanimity that would otherwise be missing. The line between rock and folk is often blurred to the point of nonexistence. I discovered the term "acid folk" among some notes on the Internet, and think it’s a proper description of a lot of this music. When you start reading notes about the individual musicians, it becomes apparent that many are from the Glasgow music scene and are former members of defunct or current bands, so their influences on one another are easily understandable.

Things get off to a mellow start with Mike Heron’s "Song for Irena," a song about parting declaimed over a demanding piano ostinato, softened by tightly harmonized backing vocals. "Steam Comes off Our House," a spirited rocker about the cost of love and living, comes next, followed by James Yorkston’s stream of consciousness "A Calvinist Narrowly Avoids Pleasure."

Next up is my favorite, a rollicking, drum-driven "Dreamcatcher," a piece of inspired "acid folk" from the trio Foxface. Lord Cut-Glass follows with another song supported by ostinato, a jewel of large, resonant chamber-music proportions called "A Sentimental Song." Aidan Moffat, one of the better-known names on the disc, contributes music to the words of Ian Rankin involving rock, the Rolling Stones, and yes, Led Zeppelin!

Of the remaining titles, I especially liked "If You Loved Me You’d Destroy Me," which finds a lover recognizing in advance all the pain he will unlock by giving totally of himself. Hal Duncan’s words hit vulnerability on the head without ever using the word. Speaking of words, "The Rebel on His Own Tonight," with words by Alan Bissett, has my favorite caustic couplet:

The download sounds very good. The numbers with smaller forces have good transparency and focus, and the ones with larger bands and overdubs are thick yet never muddy. Probably because of the master tape's limited resolution, Linn decided to offer this album only as a 24/48 download (FLAC and WMA) as well as CD-quality FLAC, WMA and MP3. As usual, Linn’s download manger performed flawlessly, and their site was easy to use. The only thing that might prove negative to potential listeners is the price. Linn’s high-resolution downloads, the ones they call Studio Masters, don’t come cheap; in fact they’re almost twice the cost of the CD-quality downloads.

Linn has many other recordings by Scottish ensembles and artists that are well worth exploring. I’d say try out How to Get to Heaven from Scotland by Aidan Moffat and The Best-Ofs, Lord Cut-Glass’s self-titled set, and Emma Pollock’s The Law of Large Numbers. All of the albums on the site have track listings, with available excerpts so you can sample them before you buy. There’s also a separate website for Ballads of the Book, with complete texts, biographies and a making-of video.

Downloading should, in a perfect world, make a lot of music readily available that might otherwise not be heard. The cost of producing a product is reduced and the cost of shipping is eliminated. Downloads should encourage listeners to be more adventurous; I have surely benefited from my musical sojourns to places as diverse as Hong Kong and Glasgow. But high-quality downloads will become popular only when the high-resolution surcharge is eliminated. Is there really a reason for it?