Days of Future Past

Despite the best efforts of certain brands, and in the waning years of our beloved hobby/passion/industry, high-end audio remains one of precious few fields with zero respect for its history. There are museums for peanut butter, rubber bands, sex toys, and shoes, alongside the obvious motorcar, aviation, watch, and other museums. Hi-fi’s lack of regard for its own achievements isn’t simply a disappointment; it’s a worry.

One should speak only from personal experience, lest moronic Twitter trolls -- the sort who have never left their parents’ basements -- contest everything one says. Having worked in and reported on three industries, I can assure you that the majority of automobile and watch manufacturers have their own museums, in addition to national or independent bodies such as the Smithsonian Institution, the Blackhawk Collection, France’s Cite de l'Automobile (National Automobile Museum) in Mulhouse, and too many others to recount. 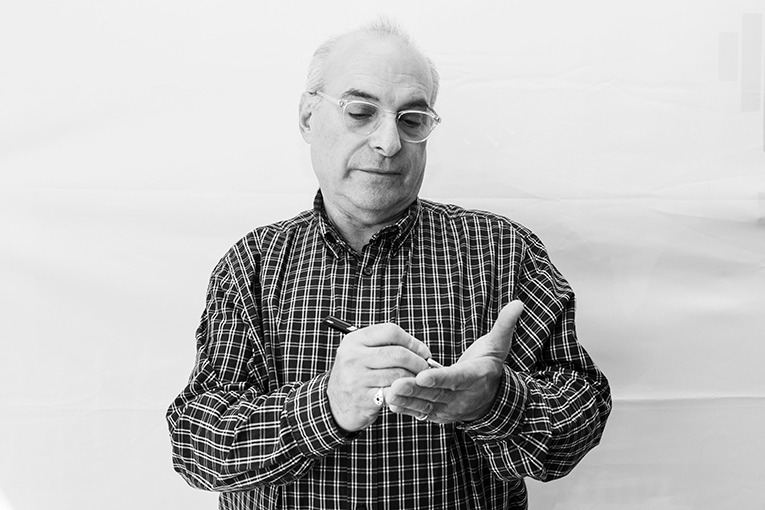 In the course of my career, I have seen collections as varied and impressive as the UK’s National Motor Museum at Beaulieu, Ferrari’s own collection in Modena, Patek Philippe’s astounding museum in Geneva (one floor devoted to the entire history of timekeeping, showing respect for all other brands, and the rest of the collection honouring its own history), the watch museum in Glashütte dedicated to Germany’s horological past, and dozens more.

Hi-fi? Aside from tiny sections in larger collections, such as the Science Museum in London or the minuscule area devoted to hi-fi in TV and radio museums (formats far better served than audio), the technical term for hi-fi exhibits is “fuck-all.” Yes, a few manufacturers have kept an assortment of their past products, but nothing on the scale of even the tiniest of watch brands.

Why does this matter? George Santayana sagely warned, “Those who cannot remember the past are condemned to repeat it.” In an era where idiots have been elevated to high government positions – and I do NOT mean “the Donald” so much as his counterpart north of the border, the heads of the EU, Germany, Turkey, France, North Korea, etc. -- there is ample proof of Santayana’s adage.

How does this manifest itself? Every year or so, some putz claims to have reinvented the (audio) wheel. How many people are convinced that standalone headphone amplifiers are recent? Go Google Audio Valve or EarMax and see how long ago they launched headphone amps, long before the iPod signalled the death of loudspeakers as the primary means of listening. Balanced outputs in domestic hi-fi? Look at the back of the Marantz DA-12 DAC, nearly 30 years old.

Ribbon tweeters? A 1920s invention. Biamping and triamping? Trio (aka Kenwood) beat all of the rest by some years in producing an amp in the early 1970s, the Supreme 1, with multiple speaker outputs and adjustable crossovers NOT for feeding remote pairs, but for triwiring. I could bore you for days with this stuff, but you get the point.

Because too few companies have recorded their histories in any depth, and because of the inexorable passage of time, compounded by changes in ownership, younger audiophiles (if there are any) have limited means of discovering what went on before, unless inspired to surf the ’net. Because of this, they may be unaware of, say, the achievements of Acoustic Research, aka AR (and not to be confused with Audio Research). 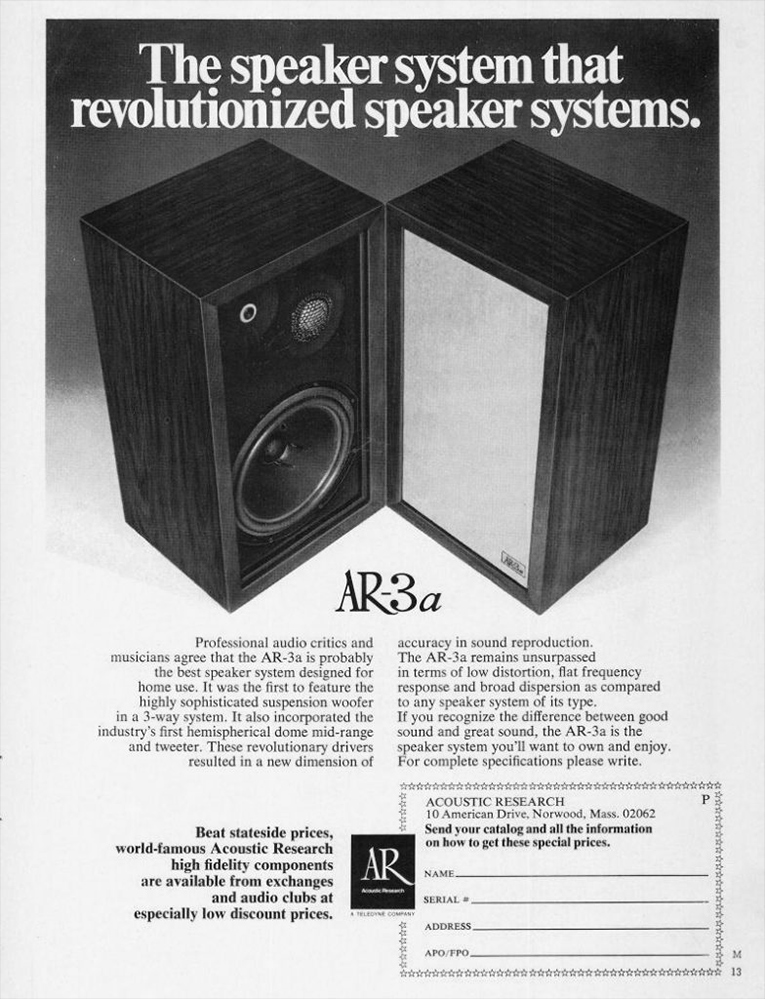 Now appended mainly to a digital player, the name once represented the company that (1) invented the sealed enclosure / infinite baffle speaker; (2) perfected the three-point suspension, belt-drive turntable that gave us Linn and all the others; (3) was one of the first to produce a decent solid-state integrated amp, receiver, and FM tuner; (4) was the first to produce an audiophile-grade one-make system (source/amp/speakers); and (5) pioneered the own-brand boutique, among other achievements.

Apogee has been gone for decades; they made the first successful full-range ribbons. Few people under 60 realise that Morris Kessler (no relation) did more to champion massive power amps, a half-century ago, than any others, freeing us from power limitations. That Stan Kelly designed the best-sounding ribbon tweeter ever, while John Crabbe is credited with inventing hanging-weight anti-skating. You get my drift.

As I near retirement, I look at my own limited achievements and -- if asked on my deathbed -- will cite my book for Quad, back in 2003, as probably the first effort to treat this industry with a history of the seriousness (and lavishness) that is commonplace for fashion, car, and watch brands. In its wake, I wrote two more -- KEF and McIntosh -- while wonderful histories have since appeared authored by others covering Thorens, Klipsch, Stellavox, JBL, Gryphon, Leak, and a handful of others. 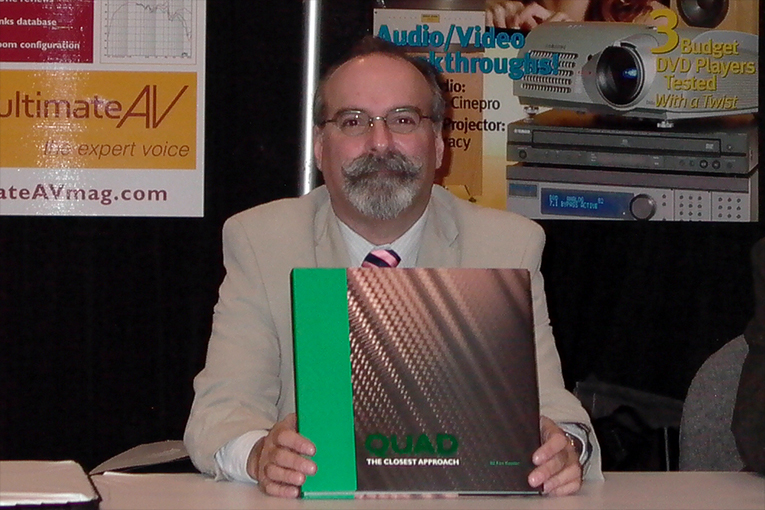 “Kessler, you’re contradicting yourself! Surely that’s proof of hi-fi’s respect for its past!” Err, no: it still means less than one half of one per cent of hi-fi’s brands have been documented for the future. I have four more to write over the next three years or so, but then it’s up to others to deal with this. But I remain pessimistic.

It’s not just a matter of writing histories (and I fear it’s too late for AR, because God knows where its archives have ended up, its principal founders are long-departed, etc.). The lack of an industry museum hit me hard when I offered -- for free -- my entire archive of magazines, press releases, catalogues, and other material and got no takers.

It’s partly a historical anomaly: I am a “baby boomer” and -- like millions my age -- am at the downsizing phase. (If it wasn’t a roomful of hi-fi and rock mags, it would be car magazines.) A friend of mine pointed out that antique shops are filled with china and porcelain because baby boomers’ parents were the last generation to collect them. The only reason that there’s no issue with vinyl is down to the LP revival.

It’s a problem of space. Those who expressed interest in the magazines -- probably requiring 200 feet of shelf space -- all said much the same thing. “My garage is full.” “My wife would cut off my balls if I turned up with boxes of magazines.” And so it goes.

Why it’s important is simple: not everything has been scanned and put online. I constantly use, for example, the estimable vinylengine.com and similar sites doing a sterling job for speakers, tape decks, etc., but I can name products with limited results when you search for them. If I didn't have, for example, a complete run of HiFi Year Books (1956 to 1981) or my 1970s Stereo Review product annuals, I’d be screwed when writing about vintage gear that needs to feature original prices.

Given the reduction in the presence of high-end audio at CES, it’s fairly obvious how it is regarded by the consumer electronics industry at large. CES is to high-end audio what Joseph and Erik Menéndez are to parents.