As far as I can tell, unless it’s something so grand or outrageous that missing it would be a faux pas too far, accessories usually get short shrift in show reports. Given the space allocations, especially in print coverage, a new speaker, amp, or turntable will always trump a new gadget. I do exclude from my contempt for add-ons such items as quality record-cleaning machines, stylus pressure gauges, tube testers, and other items with a valid purpose. But hi-fi accessories in the main tend to be as useful as electric carving knives.

I am as guilty as any in perpetrating myths, back in my early, impressionable days. But some years ago, I declared a personal moratorium on them upon realising that they, along with cables, did more to discredit the entire audio industry than even the most incompetent of reviewers. Having lived through all the bullshit about magic wooden blocks and sticky metal bits and stands that claimed miracle properties, when the same money would have been better spent on upgraded hardware, I felt obligated to champion only that with true worth.

Think about it: during the worst of this madness -- and I admit to having been as fooled/bamboozled/seduced/charmed/hoodwinked as the rest of you by certain charlatans -- people were spending hundreds or thousands of dollars, pounds, yen, francs, Deutschmarks, or lire (most of this stupidity occurred before the launch of the euro) on mumbo jumbo. No, make that “unmitigated crap.” With hindsight, many now realise that the money would have been spent more effectively elsewhere, especially if one does not have limitless wealth.

Instead of ditching their 30W integrateds for better amps or their two-way, size-of-a-loaf-of-bread speakers for something more substantial, legions of audiophiles wasted the amounts that would have paid for serious, audible, measurable upgrades on clamps, wire, feet, mats, sprays, turntable stands, or other geegaws of negligible worth. I have now long maintained, after having blown my top with (admittedly) one of the more credible makers of such stuff, what he used as his rationale: that accessories should be the last purchase you consider, after getting the basics right in the first place. 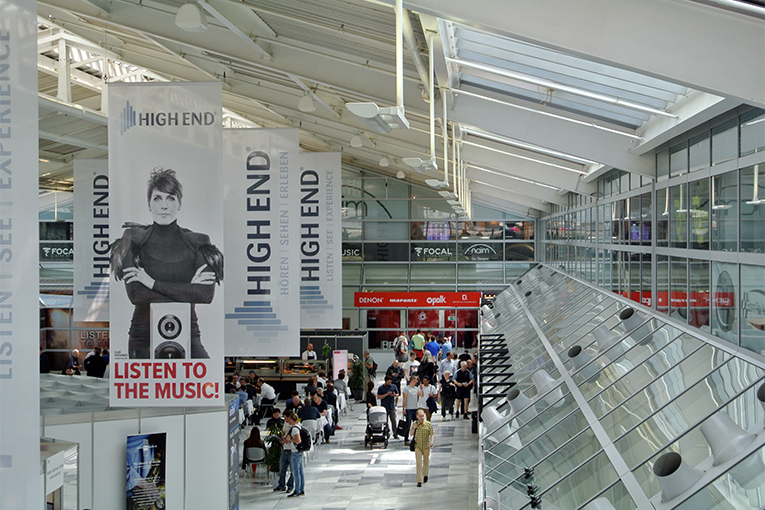 So it is with heart in throat that I write not about the TechDAS Zero turntable, the Thorens reel-to-reel tape deck, Wilson Benesch’s prototype record deck, the Audio Research Ref 160S amplifier, Sonus Faber’s Electa Amator III, or other obvious high points of Munich’s High End show, but about two accessories that have dazzled me with their intelligence.

First up is one which, even if it has NO EFFECT WHATSOEVER on the sound, is a must-own for anyone with a record deck and a penchant for dozing off or otherwise not being present when the record has reached the end of the side. Unnecessary wear on the stylus (though less so on the run-out groove) is always to be avoided, as styli have a limited lifespan, but few are the auto-lift-off turntables which qualify as acceptable in high-end systems.

Called “the Presslift” and made by Franco-Canadian firm Mind-Pop Revolution, the dual-purpose device is also a decent record weight weighing a substantial 722g. It’s for this reason that I will not discuss its performance as a weight/clamp, because weights and clamps are turntable dependent, and I cannot see one this massive working with ultra-lightweight construction, low-torque decks. On the TechDAS Air Force III Premium, it had no effect on speed, its weight actually less than the heavier of TechDAS’s two stabilisers. 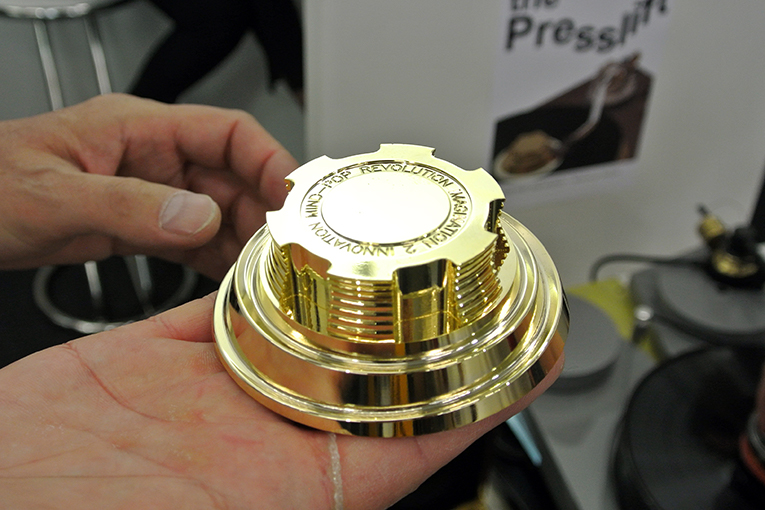 On the other hand, its stylus lift-off solution is sheer genius. Having tried so many devices over the years, from the likes of Thorens and Monitor Audio and Audio-Technica, and having worried about either their rough handling of or sideways pressure on the arm/cartridge/cantilever, I found the Presslift’s action to be a revelation. 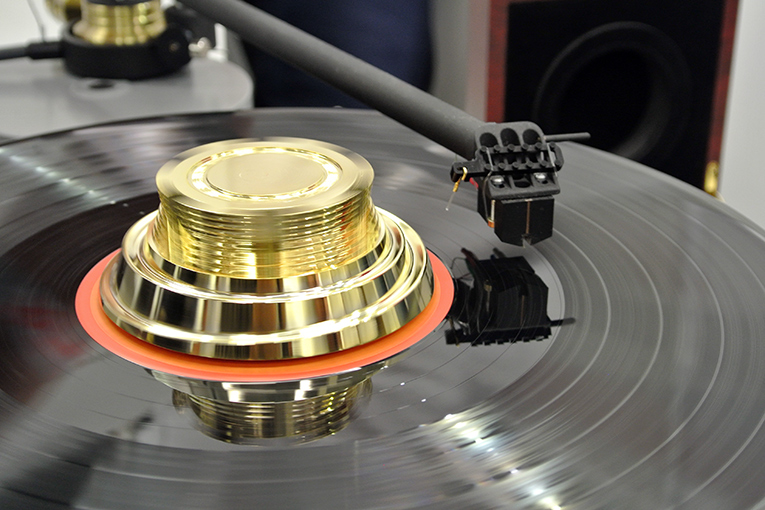 Supplied with the Presslift is a 1.6g crossbar that fits to the headshell. On the side nearest the spindle, there’s a vertical filament. When the arm reaches the end of the side, the filament is picked up by an ascending spiral coiling around the Presslift, which raises the arm. As the Presslift is a two-part affair, the bottom section continues to rotate, while the upper part which has raised the arm stops moving. Genius! 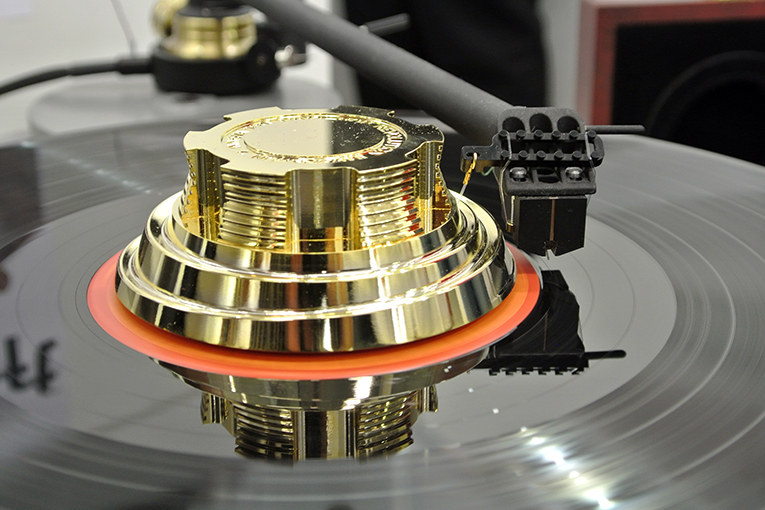 This item sells for €359/$399/£315, and is now distributed in the USA and Canada. Go to the site www.mindpoprevolution.com, watch the video, and be amazed. Then either order it directly from Europe or via your distributor. If it saves your stylus ten times, should you (like me) nod off after a large glass or two of vino or brandy, it will have paid for itself: the stylus for your $5000 cartridge probably costs $3000 to replace. By the way: I bought one on the spot.

As for the other device, this is an item less obvious to prove its worth, but I know that static exists on LPs, and I have benefitted from the use of ionisers in general. And besides, DS Audio’s cartridges and stylus cleaner have demonstrated this brand’s prowess, so the ION-001 Vinyl Ionizer makes this a hat-trick. 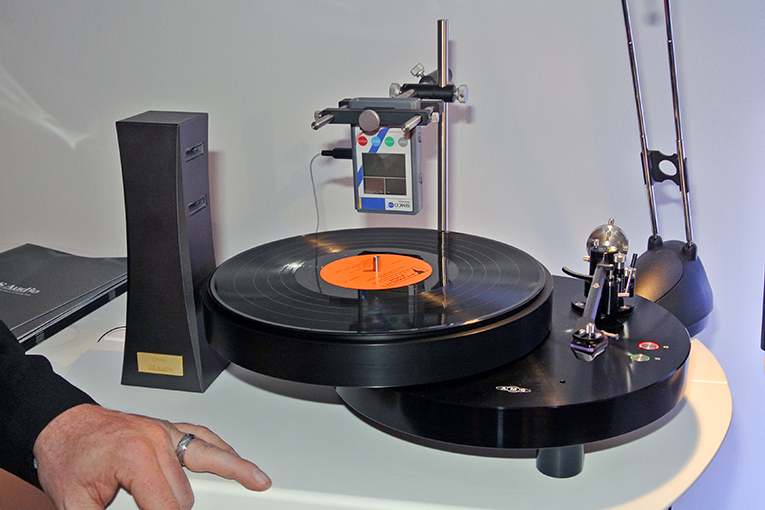 A handsome tower standing 84x84x250mm, it’s designed to be placed next to your turntable, around 150mm from the LP. It’s mains-powered, and -- as an ioniser element has a lifetime of, perhaps, 10,000 hours -- you should switch it off when not in use. What it does is generate positive and negative ions to neutralise the static on vinyl records. Apparently, CDs benefit as well, but let’s not go there: digiphiles are as irrationally contentious as Trump haters and Eu-Remainers.

Aside from switching it on at the beginning of a session and off at the end, it’s pretty much set-and-forget. As for immediate proof of its effectiveness, just find a particularly static-y album in your collection and try it out. The ION-001 should be shipping by the end of the summer. I’m using a pre-production sample . . . and it is staying put.