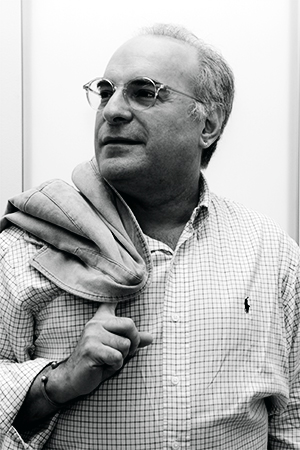 All of you are cognizant of "branding," wherein companies hook up with celebrities from the screen and sports arenas to add a frisson of glamour to their products. Omega watches, for example, are associated with George Clooney, the Olympics, the James Bond movies, and NASA.

Beats headphones reached global dominance only because of Dr. Dre (or, for those who speak Yiddish, Dr. Dre-kopf), whose name alone was enough to drag those mediocre cans kicking and screaming outside of the audiophile community and onto the crania of slackers, wannabes, and cretins from Baltimore to Brindisi to Bora Bora. As much as we'd like to credit one of our own -- Monster -- I kinda think DD possessed the pulling power.

Such is the strength of celebrity in this, the most shallow era of all time, that a bunch of semi-articulate, quasi-vegetables whose sole virtues are enormous breasts can have their own primetime TV series, and whose mere acknowledgment of a brand of eyeliner or, for that matter, panty liner, can clear the shelves of said products in minutes. But look at it from the manufacturers' viewpoint: link your product to a broadcast fixture, and you can order your private jet with impunity.

In the UK, for example, any A-list TV chef can simply mention "cilantro" or "goji" or "limoncello" or "mezzaluna," and the country's supermarkets will be emptied of these semi-obscure items within 24 hours. Thus, Monster linking up again with a major name to hawk its ear attire is not only an obvious move; it's almost compulsory.

Hi-fi long ago lost anything remotely resembling sex appeal, not that it ever had much to begin with -- even in the period when Playboy would show bachelor pads equipped with big open-reel tape decks and massive speakers from JBL or Klipsch. The last time audio was used in an ad campaign, in which the celebrity was not a musician or engineer, involved a major brand and tennis ace Bjorn Borg. Like, uh, who gave a hoot what he thought of an FM receiver? It's like asking Saul Marantz what he felt about Dunlop tires or Adidas running shoes.

To be fair to Beats, which to me is no more "hi-fi" than a pair of Nikes, they did -- singlehandedly -- show the great unwashed that there is life beyond earbuds. It's a wonderful "up yours" to Apple, which has done more to lower attitudes toward the importance of sound quality than any entity this side of a certain litigious speaker manufacturer. By fitting iPods with less-than-astounding earbuds, Steve Jobs paved the way for Beats and every other headphone aimed primarily at indiscriminate (as far as sound quality is concerned) fashion victims.

Whatever the great minds behind this are thinking -- and this late in the game, when headphones are the only growth era in hi-fi -- two of the world's largest luxury groups are looking to specialty audio for sidelines or enhancements to their core business. This may mean nothing to you, a seasoned, experienced audiophile, but it might be the last time high-end audio has a chance at attracting customers outside of the usual suspects. That is, people who can actually afford high-end gear, but who don't even know that we exist. And, hey, they've already bought into Beats.

Unless you work in haute couture, jewelry, watches, the sale of champagne and/or cognac, fashion, cologne, or luggage and leather goods, the names "LVMH" and "Richemont Group" will mean nothing to you. The opposite, corresponding truth is that nobody outside of consumer electronics betrays a flicker of recognition upon hearing "the Harman Group" or "Fine Sounds." 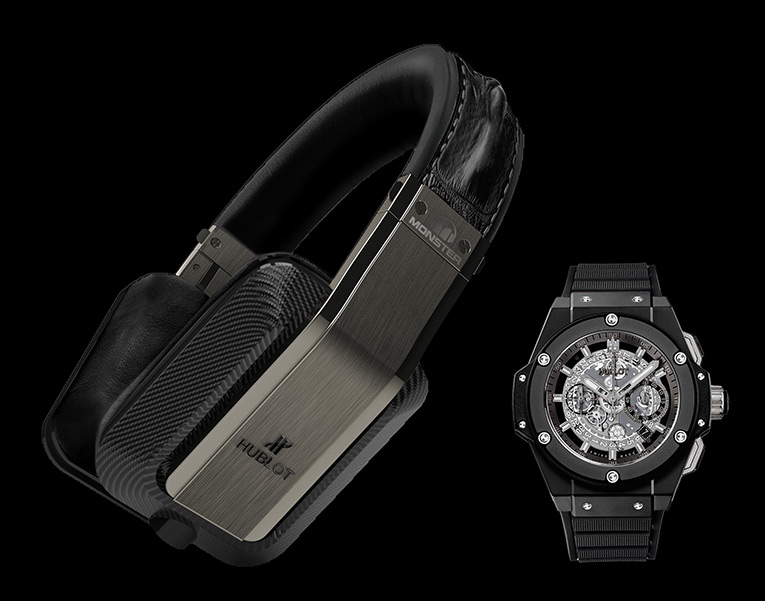 Rest assured that LVMH (for "Louis Vuitton Moët Hennessy") and Richemont are so huge that they regularly make deals in the billions. They have individual brands with turnover greater than the whole of the global high-end-audio industry, and could buy our biggest names with sums smaller than the amount they spend annually on carrier bags. To them, our giants are plankton on the butts of sperm whales.

What should amuse or excite you is that these luxury houses have noticed "us" of late, buying into high-end audio whereas previously we enjoyed as much a presence on their radar as fertilizer or colostomy bags. The problem is, nothing has yet indicated that the hi-fi industry will benefit at all from their patronage, in the way that Richemont's ownership of Montblanc has made fountain pens cool again, or how LVMH has elevated champagne to the level of a must-drink beverage.

Here's how it's panning out: Richemont owns a big chunk of Meridian. Aside from a radio Meridian made for Dunhill (another Richemont brand), there has been not one single manifestation of Richemont's stewardship, as far as breaking Meridian into the wealthy mainstream goes. Thus, Meridian has yet to benefit from being the kissing cousin of Cartier, IWC, Piaget, or any of Richemont's other prestige companies.

LVMH's boss -- so wealthy that he could bankroll God -- now has a personal stake in Devialet, but that's too new to show any change in the French amplifier manufacturer's fortunes. Suffice it to say, Devialet now has some of the deepest pockets in audio. Let's hope that -- unlike the fiasco that was TAG McLaren's ill-fated flirtation with audio in the late 1990s, which redefines "total disaster" -- Devialet's bosses will exploit their patron's genius to lift the brand outside of the audio community and into the world of Bentley and Dom Perignon.

Probably the best shot that specialty audio will ever get at reaching the people who can actually afford it is a recently announced tie-in between a high-end watch brand and Monster: Monster is now making headphones for Hublot. (I have to keep expressing it as "reaching the people who can actually afford it" because people like Mikey Fremer and John Atkinson at Stereophile feel that I'm an elitist prick for wanting to attract millionaires, or even mere "high earners" with considerable disposable income, to high-end audio. They think high-end gear is purchased by people on welfare or students.)

Those who know Noel Lee are anticipating something that will, at the very least, be fun to observe after the pasting he's had online about the way Dr. Dre treated Monster. We've not yet heard Noel's side of that liaison, but trust me: I've known Noel for 30 years, and he's no patsy.

Following his parting of the ways with Dr. Dre's Beats, a product that exemplifies all one needs to know about the huge sales success of headphones, Monster Cable has girded its loins for what some see as revenge -- not that Noel is a vindictive soul. But Monster not only found another hip-hopper, Swizz Beatz, to help them create a new market and responded with its own new line of cans; it found one who enables the brand to use the word "Beatz" as much as it likes, and Dre can do f-all about it. 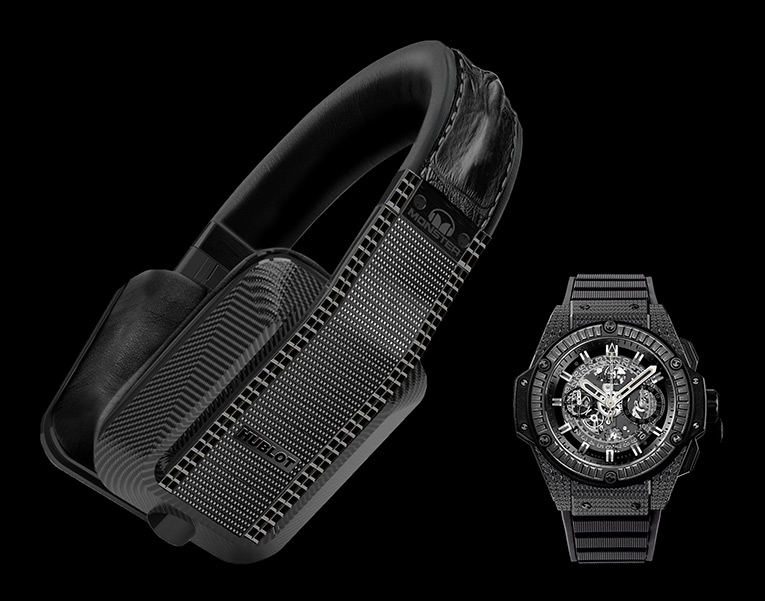 I'm not suggesting that Monster's latest venture will reach anywhere near Beats' level of commercial success, but Lee might have the last laugh. Monster's new partner, Hublot, is a watch brand so devilishly clever that it's terrifying. A decade ago, it was close to disappearing. Now, its "Big Bang" watches are the choice of trustafarians, exiled Russian gangsters, hip-hoppers, and other clients who prefer watches the diameter of a peach, and it has, for the last two years, produced watches for Ferrari.

I once told a hi-fi colleague who asked me about Hublot's Jean-Claude Biver that, "J-C is the 'Noel Lee of watches'." Biver is said to be worth $160,000,000 USD. Noel is probably worth a lot more, so -- for once -- the hi-fi brand is not the lesser of the two partners in a collaboration with a luxury manufacturer.

Unveiled at Baselworld, the watch equivalent of CES, was a line called InspirationTM Hublot Headphones. The base version could be any well-made, high-end headphone. The press pack indicates that there will be versions accented by colors to mirror the Hublot watches with gem-set bezels, thus enabling some Muscovite mafioso to provide his Svetlana with cans to match her Big Bang. For which he will undoubtedly be rewarded with a bigger bang. 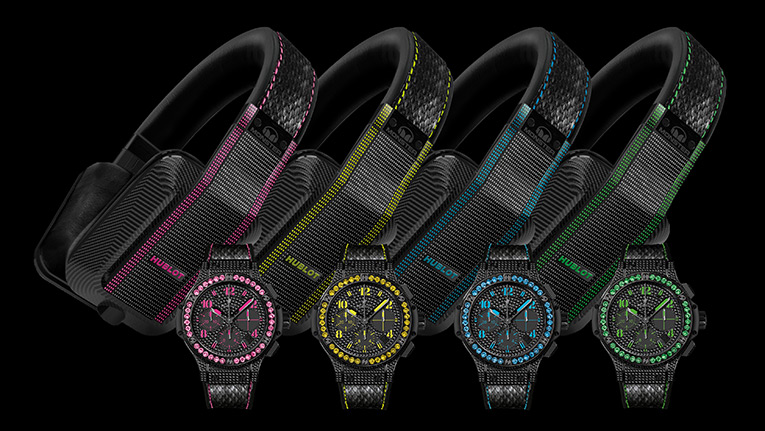 Noise-cancelling, over-the-head, Bluetooth connectivity -- the Hublot/Monster headphones can do everything you'd want from a set of luxurious headphones said to sell for the equivalent of $2300. Curiously, though, not one person I bumped into at Baselworld asked about the sound.