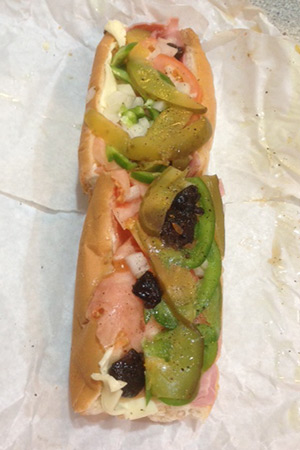 It's been a terribly nostalgic month, but then that comes with the years. One friend reminded me that the Sonus Faber Guarneri is two decades old, and I just sent back my DaySequerra FM tuner for its 25th-anniversary update. A quarter century! But what started the chronic lump-in-throat is the death of a sandwich.

What on earth, you might be thinking, does a sandwich have to do with audio? Nothing, I admit. However, its passing represents the increasing threat of the demise of quality, tradition, excellence, what-have-you. DiPietro's, a mom-and-pop store in Portland, Maine, has shut its doors after 69 years, and I am bereft.

A bit of history: while many millions scoff edible but lesser pretenders from Subway, Quiznos, or others who produce what some call "submarine sandwiches," please know that the original -- named emphatically an "Italian sandwich" -- was invented in Portland, Maine, by the Amato family in 1902. It was a meal in a roll, sold to dockworkers. And it is the finest sandwich on earth, whatever that schlub on Man v. Food Nation declares.

It became a local tradition, which spread around the state, then the country, swiftly acquiring other names, e.g., the aforementioned "sub," as well as unholy ingredients, like the shredded lettuce beloved of Bostonians. (Note to foodies: that's like putting mayo on pastrami.) The real thing consists of a soft roll, resembling a 12" hot-dog bun, cheese (provolone if you're posh), ham or salami, onions, green peppers, slices of pickle, tomatoes, and black olives. It is then treated to salt, pepper, and olive oil.

Portland's citizens split into two factions. Although every mom-and-pop store in the city soon offered "Italian sandwiches" (including my late father's place, where he added his own twist by making them on "bulkie" rolls), Amato's reigned supreme save for one challenger: DiPietro's. DiPi's were simply tastier. Was it the bread, the olives, the cheese? No two fans can agree, but my family was assuredly of the DiPietro's camp.

As for differences, they are to some as subtle as the variance between two grades of wire. On my last trip to Portland, in May of this year, I couldn't get to DiPietro's, so I had an Amato's. And it was, admittedly, divine, but it wasn't quite a DiPietro's. If you're into wine, the difference would be 98 points from Parker versus 100. What I didn't know was that it would have been my last opportunity to eat a DiPietro's.

DiPietro's remained a single premises, while Amato's grew into a chain of shops in New England. Mama DiPietro has decided to retire, the building has been sold, and the new owners may try to keep it alive. But like so many hi-fi legends, such products rarely survive the departure of the individual (or family) that created the legend.

So back to hi-fi. As my statins kick in, and I hear of another brand folding, or changing hands, or another alarming anniversary is announced, I drop into reminiscing mode. I have before me the latest issue of The Abso!ute Sound, a journal to which I contributed a couple of decades ago for a short spell until I became a victim of the then-current psychotic political machinations of a now-forgotten nonentity who dripped poison into the editor's ear.

But that's another story. What's so trenchantly startling about this issue is that it marks 40 years since TAS was founded. Four decades! At the time, I was at the University of Maine, working for a hi-fi store in Bangor run by a guy named Ted Chapin, who taught me more about the high end than anyone up to that point.

Maine in 1973 was hardly overrun with high-end emporia, but McIntosh and KLH were available at New England Music, while Ted carried the massive Marantz power amps of the day, ESS speakers with Heil AMT drivers, Bose 901s, and a slew of open-reel decks and the like. I seem to recall Crown and Magnepan too, while there also seemed to be an awful lot of SAE and Phase Linear gear in Portland. At home, Ted had an Empire turntable, which I still consider to be one of the sexiest pieces of audio equipment ever.

One day Ted handed me a copy of TAS, and it yanked open my eyes (and ears). Up to that point, I'd been a reader of the US newsstand mags, too young and unsophisticated to realize that they were mainly advertorial. Even at that stage, the industry was in the thrall of giant Far Eastern multinationals, and the writers would do unconscionably stupid things like advise the White House to buy Sansui instead of far-superior home-grown hardware.

TAS changed everything -- for me, at least -- because I didn't have access to UK magazines, Stereophile was then little more than an occasional presence, and I rarely made it to Boston, where shops were filled with thrilling hardware. TAS wasn't a whole lot better than Stereophile when it came to publishing schedules, but it arrived often enough to spread the word in those pre-Internet days.

A decade later, and I'm in the UK, faced with what was to me totally alien hardware: big Celestions, Tannoys, KEFs, IMFs, Quads, and other speakers that you could find stateside only if you lived in a major metropolis. The valve amp revival was a couple of years away. The magazines were a whole lot better. 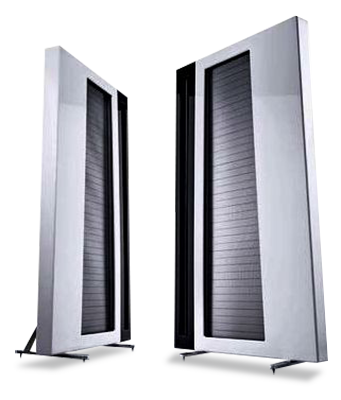 Another decade on, and I'm in Framingham, Massachusetts, in a blizzard, chasing down a copy of Mobile Fidelity's UHQR pressing of Sgt. Pepper. The guy in the store says, "You gotta hear these speakers." They were the original Apogees. Another life-changing moment. I had never heard anything like them. I became a devotee.

In my listening room there's a pair of Scintillas, which I fire up whenever I get hold of an amplifier that doesn't pee its pants at the thought of driving a 1-ohm load. Last year I bought a mint pair of Stages, my all-time favourite small panel. Apogee is long gone, save for a fanatical fan in Australia who makes rebuild kits and his own take on certain models.

A week ago, I'm in San Francisco, at a hi-fi show I didn't even know was taking place -- there by accident. A familiar face, a former Apogee employee. And then it hit. There's another anniversary to mark, another indicator of how standards are declining and there's nothing we can do about it.

Ten years ago, Jason Bloom, co-founder of Apogee, died. He was my first real high-end mentor after Ted Chapin, and I found him to be the most worldly, passionate, knowledgeable, sophisticated individual I have ever known. Wine, cars, clothing, how to tie a perfect half-Windsor. He turned me on to the Persuasions, for which I will always be grateful. But most of all, as far is this column goes, he and his father-in-law, Leo Spiegel, produced the finest speakers I have ever heard.

While TAS has just announced its three-volume history of the high-end -- and I am sure it will be a superlative study -- I doubt we will ever hear the true story of the backbiting and spleen and bile that jealous rivals heaped upon Apogee. We will not, due to the hyperactivity of lawyers, ever hear the truth about spiteful and corrupt reviewers. At some point, Jason simply decided to stop fighting them.

All I know is that I witnessed in Jason, Leo, and Apogee, aided and abetted by Dan D'Agostino, then at Krell, the arrival of a breakthrough product that, sadly, came and went in under 20 years, and had its lasting impact mainly on the memory of now-aging audiophiles. They now look back on the 1980s and early 1990s as the period when high-end hi-fi giants trod the earth, only to be felled by digital, by iPods, by streaming, and by other lethal assaults on sound quality. For those who lived through that period, though, it was, appropriately, the high end's apogee.