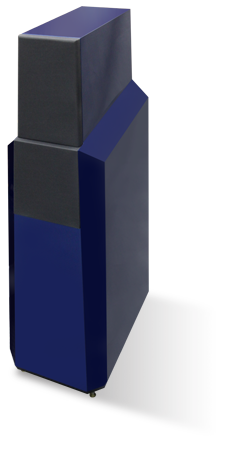 Loudspeakers that utilize time- and phase-correct, first-order crossovers are relatively rare. For proponents, it is all about preserving the waveform, as that is the one approach that can produce a true time-aligned output from multiple drive-units. But first-order designs place an incredible strain on drivers -- their 6dB/octave crossover slopes force them to produce significant output beyond their primary operating range -- often leading to low sensitivity and, to critics, a perception of limited dynamic energy. For true believers such as loudspeaker designer and maker Richard Vandersteen, however, the effort to overcome any obstacle is validated by the results. Vandersteen and his company have been beating the time- and phase-correct drum for over 30 years.

Vandersteen Audio has long been associated with the value-oriented end of the audio hobby, and their bandwagon is now gaining momentum at the cutting edge of high-performance audio with the revolutionary Model Seven. Publisher Doug Schneider was bowled over by the Model Seven at the 2009 Rocky Mountain Audio Fest, calling it an “almost” life-altering experience. Doug was drawn in by the Seven’s clarity, cleanness, and purity through the midrange. Peter Roth reviewed the Model Seven for our sister site Ultra Audio earlier this year, and concluded that it was the finest speaker system he’d ever heard. In fact, Peter was so impressed that he recently bought a pair ($45,000, now under construction); they will serve as the new reference speakers in his primary review system.

For a reference-level speaker system capable of full-range performance (22Hz-30kHz, +/-2dB), the Model Seven is surprisingly compact at 44"H x 14"W x 20"D. With its tapered and beveled surfaces, the Seven looks smaller than Vandersteen’s similarly sized Model 5A, while presenting a thoroughly modern, 21st-century aesthetic in its high-gloss automotive finishes (it can be ordered in any available PPG color). At 175 pounds, it’s small yet dense, a significant portion of each speaker’s weight accounted for by Vandersteen’s proprietary Carbon Clad body panels. Each panel is a nine-layer sandwich: three sheets of carbon fiber bonded to high-density fiberboard, followed by a central damping agent and mirror-imaged layers of HDF and carbon fiber. Between the constrained-layer damping of the superstiff Carbon Clad panels and the underlying carbon-fiber frame and bracing structure, collectively called a Vandersteen Stealth enclosure, the result is an extremely inert cabinet.

While the enclosure is impressive, the heart and soul of the Seven is its Perfect Piston drivers. The culmination of a decade of research by Richard Vandersteen, these feature a new cone structure (patent pending) in which each midbass, midrange, and tweeter cone consists of a core of laminated balsa wood machined to the optimal shape and size for its frequency range. The lamination, front and back, is a layer of ultra-high-modulus carbon fiber. This strong, superlight, inherently antiresonant cone structure makes possible truly pistonic operation throughout the extended frequency envelope demanded by the Seven’s first-order filter networks.

But even the best loudspeaker is limited by how it interacts with the room. In this regard, an active subwoofer section gives the Seven a flexibility equal to its prodigious bass output via a built-in, 11-band, parametric equalizer. Placement in the room can be optimized for frequencies over 100Hz (or for more domestic considerations), and each speaker’s bass can be dialed in to correct most problems of bass/room interaction. While this powered subwoofer system relieves the partnering amplifiers of the demands of current-hungry low frequencies, the Model Seven is still relatively inefficient, requiring at least 50Wpc, and preferring much more (how much more will depend on room size and preferred listening volumes).

While it takes cutting-edge technology to create a true reference component, all too often technological tours de force fail to equal the sums of their parts. Not so the Vandersteen Model Seven. Undoubtedly due to the consistency of the driver materials, the complementary nature of its disparate subcomponents, and the stability of vision and talent of its design team, the Seven produces a whole-cloth, coherent sound that is only rarely achieved by multi-driver systems. As Peter Roth said in his review, “the speaker’s supreme coherence was enhanced by its sound remaining open and uncolored.” Further, he noted both a dynamic facility and a lack of distortion unprecedented in his experience, and concluded, “it is simply the most dynamic speaker with which I have had long-term experience. . . . [R]egardless of overall volume level, the Seven was every bit as dynamic as any high-efficiency horn speaker I’ve heard.”

Coherent, uncolored, and dynamic, the Model Seven retrieves and resolves microphonic, low-level details, to enable the communication of nuance, instrumental decays, and a three-dimensional representation of real instruments in real space.

The price of this system places it in rare company. For the reference-level performance it achieves, however, the Model Seven finds itself in company rarer still, regardless of price. That the Seven comes in such an attractive, compact package and offers such flexibility of placement and room interface is icing on the cake.