Priced at $3300 (in USD) and armed with a host of features, including an internal moving-magnet/moving-coil phono stage, a built-in high-resolution DAC, seven selectable digital filters, wired and wireless digital connectivity options, Dirac Live room correction, streaming functionality, and a headphone amp, the Arcam SA30 is one of the most versatile integrated amplifiers on the market. It’s also one of the best sounding in its price range, or even beyond. According to Roger Kanno in his October 2021 review of the SA30 on this site: “There isn’t another product I know of at this price point that does as much, or sounds as good while doing it.”

Outwardly, the SA30 doesn’t look special. Weighing 26.5 pounds and measuring 17.0″W × 3.9″H × 12.7″D, its case is made from folded metal and only comes in a dark-gray finish. In his review, Roger called the SA30’s look “clean” and “businesslike,” but wrote that he wasn’t a fan of the onscreen display, which he thought to be “quite coarse-looking” and “inelegant in its operation” with the way characters scrolled across the matrix screen. 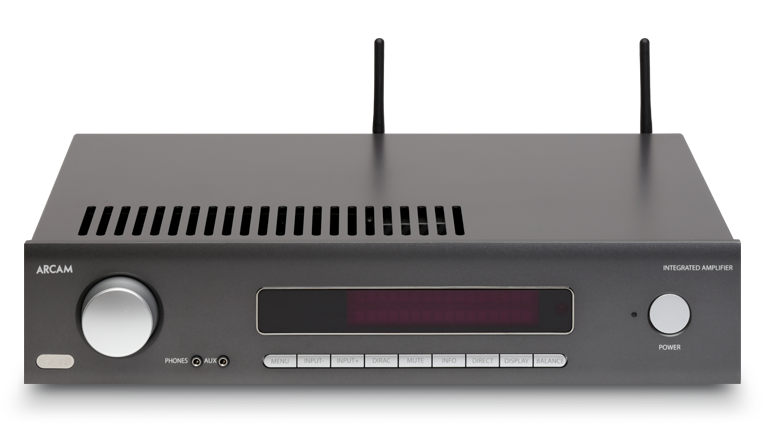 Appearance aside, Roger stressed that the SA30 has “got it where it counts.” He was referring to what’s inside the case, which starts with a proprietary class-G amplifier circuit that he described in the review as having “two power supplies to feed the output transistors, with the first set of power rails running in class A for most listening situations.” He went on to explain that when “additional power is required, MOSFET ‘lifter’ devices can switch to higher-voltage power rails in less than a microsecond.” Arcam rates the SA30 at 130Wpc into 8 ohms or 200Wpc into 4 ohms, which our electronics measurement specialist, Diego Estan, was able to corroborate when he measured the review sample in our lab.

Roger described details of the SA30’s DAC section, which is based on an ESS Technology Sabre ESS9038Q2M DAC chip, and the amp’s abundance of analog and digital input options. But one of the SA30’s most useful features for audiophiles, which Roger made sure to focus attention on, is the option to switch its Analogue Direct mode on or off. When this mode is activated, all incoming analog signals remain in the analog domain from input to output, bypassing the SA30’s digital circuitry. That’s something hi-fi purists might like. But when Analogue Direct mode is switched off, analog signals, including those feeding the phono stage, are digitized at 32-bit/192kHz resolution by an AKM AK5552 analog-to-digital converter, which means they can be processed by the Dirac Live room-correction software onboard the SA30 to improve the sound of speakers playing in a room. 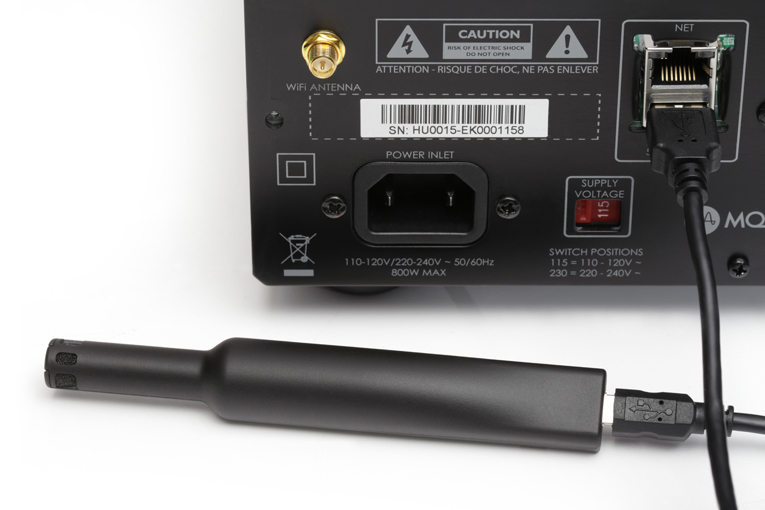 For his listening evaluation, Roger began with the SA30 in his second system, where it drove PSB Alpha T20 floorstanding speakers. He typically uses this system to watch TV programs and movies, as well as for listening to music. He remarked that the SA30 “easily drove” the loudspeakers and that the “clarity of sound was simply astounding and imaging was rock-solid for television and movies.”

Roger then enabled Dirac Live room correction in this system, revealing that doing so took listening to music through the SA30 “to a new level of performance.” Playing back the album Makeover (16-bit/44.1kHz FLAC, Nonesuch/Qobuz), which he described as a “compilation of dance remixes of k.d. lang songs,” Roger wrote that the sound was “totally banging even through the relatively small Alpha T20s,” and mentioned that the “pumping bass of the EDM version of ‘Lifted by Love (Club Xanax Mix, 1993)’ was extremely taut and responsive.” He also noted that the “delicate a cappella vocals in the opening of ‘Theme from the Valley of the Dolls (Junior Vasquez 7″ Mix, 1997)’ had an amazing transparency and purity that was present from the lower midrange all the way up through the treble frequencies, and the electronic strings and synth effects moved precisely across the soundstage with little evidence of strain.”

To listen more critically, Roger set up the SA30 in his reference system, where it drove MartinLogan Masterpiece Classic ESL 9 hybrid electrostatic speakers (the ESL 9 combines an electrostatic panel for the midrange and treble frequencies with a dynamic driver for the bass). In this system, Roger streamed digital music from Qobuz via Roon running on a Windows 10 laptop, and he played LPs using his Pro-Ject Audio Systems X1 turntable with a Pick it S2 moving-magnet cartridge. It was also in this system that Roger tested the SA30’s headphone output with his HiFiMan HE400se headphones, which he characterized as being “extremely high-value but slightly insensitive, meaning that the headphone outputs of some components will struggle to make these planar-magnetic cans sound their very best.” But Roger wrote that the SA30 powered the HiFiMans “very well” and sounded better than the headphone output of his reference Oppo UDP-205 universal Blu-ray player. 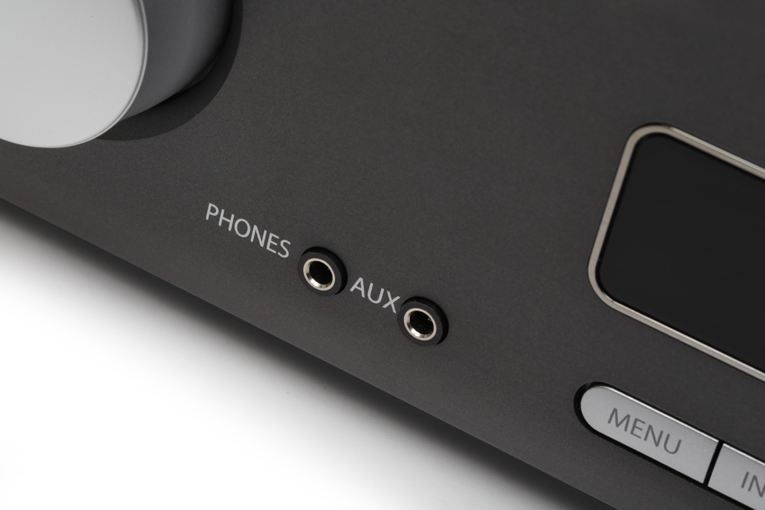 When listening to his MartinLogans, Roger highlighted that before Dirac Live was engaged, “the SA30 exhibited good control over these hybrid electrostats, but after setting up room correction, the performance of this $3k amp was astonishingly good.” Playing Makeover again, he noted that the “bass on ‘Lifted by Love (Club Xanax Mix, 1993)’ dug way deep and was deliciously elastic and bouncy, while k.d. lang’s vocals soared high above the pulsating rhythms.” When Roger played “Summerfling (Wamdue’s Makin’ Me High Dub, 2000)” at a high volume level, he explained how “the dense, solid backbeat and synthesized reverb effects produced a dizzyingly complex, but coherent wall of sound between the speakers.” To these comments he added: “The SA30’s ability to project such a huge soundstage in my room with absolute control was not something I expected from such a reasonably priced amp.”

Roger also played The Music of Copland & McKinley (24/44.1 FLAC, Navona Records/Qobuz), which features Kim Ellis and Richard Stoltzman on clarinet and the Slovak National Symphony Orchestra, with Kirk Trevor conducting. He described how the SA30 “portrayed the reedy bite of the clarinet exceptionally, without becoming screechy” and how it was “outstanding in positioning the realistically reproduced slapping sound of the double bass in its own acoustic space, to the right of and behind the clarinet.” 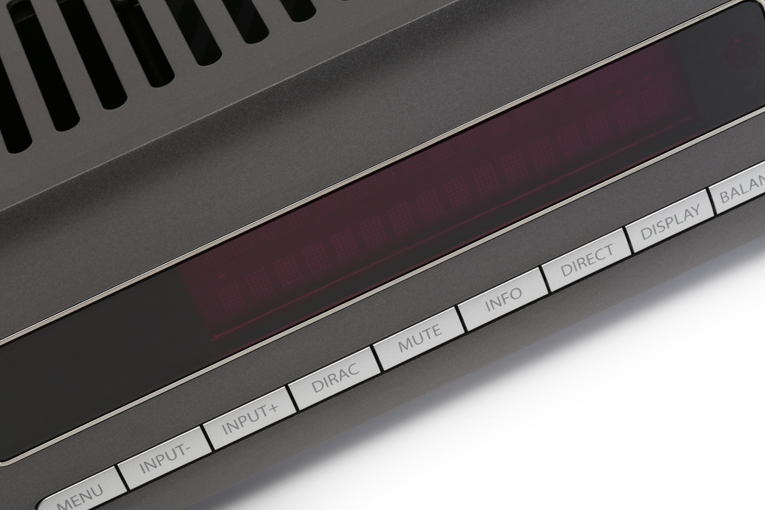 When it came to LP playback, Roger confessed in his review that he “was hesitant to expect too much from the SA30’s built-in phono stage.” He reasoned that the amp “already provides so much performance and value with its excellent-sounding class-G amplification and DSP room-correction system, considering its $3000 asking price.” But he was pleasantly surprised:

Playing the Abbey Road Studios half-speed mastered version of Dire Straits’ Brothers In Arms (Vertigo ARHSDLP004), the background was dead quiet with only some minor surface noise from this 45-rpm pressing. Sting’s backing vocals on “Money for Nothing” were hauntingly ethereal and starkly contrasted by Mark Knopfler’s more measured and deliberate delivery. The opening beats on the drum kit bounced wildly between the speakers as they should, then settled precisely dead center with the taut beat of the kick drum keeping perfect pace. The more sedate “Your Latest Trick” sounded even better, with the trumpet solo sounding very distinct from the saxophone and having an overall coherency and level of detail that you rarely hear from a built-in phono stage at this price point.

Concluding his review, Roger conceded that it was possible to get “slightly better performance or more luxurious build quality” if you’re willing to spend more money, but that “the SA30 is probably the best value for a streaming integrated amplifier-DAC available today.” So while the SA30 might not have sophisticated looks or build quality that’s above the norm, it’s still a reference at its price point for both features and sound.