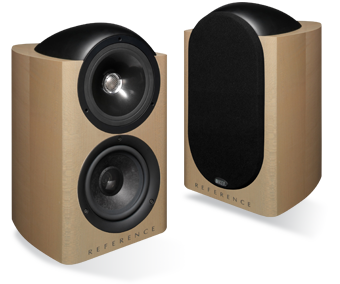 The performance of a loudspeaker obviously has a lot to do with the quality of the speaker itself, but it also has plenty to do with how that speaker interacts with the room it's being played in. That's why it's important not only to set up speakers properly in a room but also to get the right size of loudspeaker for a particular space. In general, large, full-range speakers such as the Revel Ultima Salon2 work best with larger listening spaces, whereas smaller rooms are better suited to compact, minimonitor-type designs that have tinier footprints and that won't overload the room with too much bass. As a result, there's no one speaker that will work well in every room. There are reference-grade loudspeakers for big and small spaces, as well as everything in between.

One of the best small speakers we've reviewed in the last few years is the KEF Reference 201/2 stand-mounted loudspeaker, which currently sells for $6000 USD per pair. The 201/2 is KEF's most expensive stand-mounted design, but for good reasons: it's exceptionally well built, and it's available in a wide range of finishes, including custom colors. Most important, it's a technical tour de force with features that make it unique. The KEF 201/2 received a Reviewers' Choice award when Doug Schneider reviewed it in December 2007, and it won the 2007 SoundStage! Network Product of the Year award for Innovation in Design.

Whereas most stand-mounted speakers are two-way designs, the 201/2 is a three-way. KEF accomplished this with a small cabinet by using a coincident-type driver, which has the tweeter mounted directly inside a midrange cone. KEF calls their implementation of this driver type Uni-Q, something they've been refining for years. Bass comes from the 6.5" woofer that's mounted underneath the Uni-Q driver and is cleverly ported out the top of the cabinet, near the rear.

KEF's Uni-Q driver is one of the most advanced coincident-type drivers we've seen, and it employs some design features that attempt to overcome typical limitations of this technology. Worth noting are the shallow midrange cone, which is shaped to act as a waveguide for the tweeter -- it aids instead of interferes with the tweeter's output the way many cones do in coincident designs -- as well as the flat, ridge-less midrange surround, which eliminates the diffraction effects that bulbous surrounds cause.

The Uni-Q driver wasn't created to save space, though. The main goal with this driver type is to acoustically align the tweeter and midrange so that the sound dispersion in all directions is equal, making power response more uniform. This is in contrast to a typical speaker where the tweeter is mounted over or under the midrange or midrange-woofer (depending on how many drivers are used) and dispersion is compromised on one axis (usually vertical) in order to optimize the other axis (horizontal).

KEF's technology works. The measurements we took of the 201/2 in the anechoic chamber at Canada's National Research Council (NRC) were near perfect in terms of frequency-response linearity and dispersion, with a notable absence of diffraction effects. In fact, dispersion was so even that you could lay the 201/2 on its side in order to lower its profile and expect it to sound pretty much the same, which is exactly why KEF also supplies hardware for doing so (essentially a curved "mat" with a flat bottom for the 201/2 to rest on). It's also worth noting that the 201/2 is extremely low in distortion -- lower, in fact, than many much larger floorstanding designs.

The 201/2 plays music like it measures -- exceptionally well. The bass falls off fairly sharply in the chamber below 75Hz (in-room below about 50Hz), but above this region the 201/2 is extremely neutral-sounding, meaning it adds next to no colorations of its own and is notably clean. The low end trails off sharply but smoothly, making matching it to a subwoofer easier if you decide to create a sub-sat system to get more bass. The 201/2's top end is extremely linear and extended but never sounds bright; instead, the 201/2's tweeter soars into the stratosphere in a strong and revealing way, and it's obviously been designed to be partnered with electronics that are equally refined up top. Put a bright, grainy amp or preamp on these speakers and you'll hear it due to the unrestrained extension. Use topflight electronics with a clean top end on them and they're likely to sound amazing by showing you exactly what your components can do. The soundstage a pair of 201/2s provides is spacious yet precise. All told, the 201/2 is an extremely well-engineered, extraordinarily revealing monitor that's perfect for home use, and it would be equally at home as a high-end recording monitor, provided there's no need for it to reproduce super-deep bass.

The 201/2's flaws are few, but there are some things worth mentioning. The bass is one issue -- to plumb the depths you'll need to add a sub. Another is its low sensitivity: KEF rates the 201/2's sensitivity as 86dB (2.83V/1m), while our measurements showed it to be only 83.5dB, which is less than average. KEF recommends amplifiers rated from 50 to 150W. Doug Schneider used the 201/2 with a variety of amplifiers, and he felt that a 50Wpc amplifier was probably too small since it clipped pretty badly when he raised the volume too high. In his opinion, most consumers will need at least 100Wpc, with 150Wpc being better, particularly if they want to play a pair of 201/2s extremely loud.

KEF's Reference 201/2 is a few years old now, but great loudspeaker designs don't go out of fashion too quickly. The 201/2 is still current in KEF's lineup, and it's just as competitive today despite an increase in competitors. And while $6000 might seem steep to some for such a compact speaker design, it's actually very reasonable when you consider the exceptional build quality, technology, and performance that the 201/2 offers. The 201/2 is one of the few truly great stand-mounted speakers currently on the market, offering reference-level sound for smaller listening rooms.