No discussion of the current state of digital audio is complete without a focus on the music server. As a category of component, "music server" is relatively new -- and broad. It can mean many different types of products, from simple laptop computers to small, discrete black boxes that are about as attractive as a primer-covered Yugo. Then along came the Aurender S10 music server, and everything changed. Here was a music server that sounded better, looked better, and operated slicker than any server before it. It has a user-selectable front-panel readout, a beautiful aluminum enclosure, custom parts throughout, all the digital outputs you’ll ever need, and an iPad interface that’s a joy to use. In short, it’s a complete product.

But "complete" doesn’t tell the complete story. Yes, the Aurender S10 is expensive at $6990 USD, but its sound plays in a league even higher. When Jeff Fritz chose the S10 for The World’s Best Audio System 2012, he said, "Who would have thought that a brand-new company could produce the most refined music server in the world? Wouldn’t you have placed your bet on, say, a company that’s been making CD players for the past 20 years? Well, apparently, new blood and out-of-the-box thinking are needed to seriously tackle this genre of product, which, until now, seemed more home brew than high end. The buzz around the 2011 Rocky Mountain Audio Fest was that the Aurender S10 had impressed some hard-to-inspire folks. I talked with one manufacturer of CD players -- good ones -- who was buying an Aurender S10 for his own use. When I began researching the Aurender S10 and learned that it’s the result of a large R&D program, and that key subcomponents such as its soundcard were developed from the ground up, I realized that I’d found a mature music server worthy of TWBAS 2012." 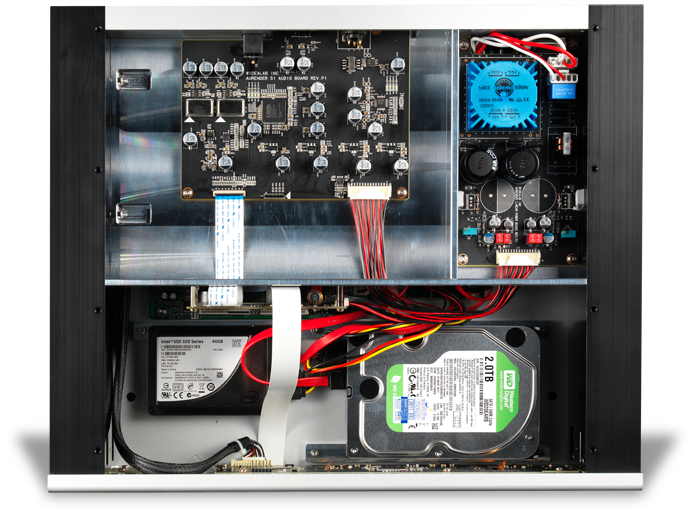 Once the Aurender S10 was finished serving as part of TWBAS 2012, that unit was shipped to Vade Forrester for a full review. Was he impressed? Oh, yeah -- but VF’s comments on the sound of Ottmar Liebert’s One Guitar through the S10 speak for themselves: "The S10 just made the guitar sound very realistic -- more so than I’ve heard from other servers. I had intended to listen to only one or two tracks, but couldn’t bring myself to press Stop until I’d heard all of One Guitar. The overall experience was a bit like listening to a new -- and better -- album."

Vade concluded: "What most impressed me about the Aurender S10 was that it made recorded music sound more real and more involving -- and more beautiful. If digital sound reproduction has left you cold, you ought to give the Aurender S10 a listen. After hearing it, a good friend who has remained a staunch analog holdout observed that perhaps it was at last time to consider a digital system. A Reviewers’ Choice award for the Aurender is a no-brainer, but I think it deserves to be a Recommended Reference Component. In my view, the Aurender S10 advances the state of the digital art."

These days, any company that produces and markets an expensive music server must take into account that the Aurender S10 and W10 are on the market and daily gaining steam. What’s most impressive about the S10 is that it has covered all the bases, from sound quality to build quality to functionality. The Aurender S10 has now earned another plaudit: the distinction of being the first music server to be named a SoundStage! Hi-Fi Recommended Reference Component.