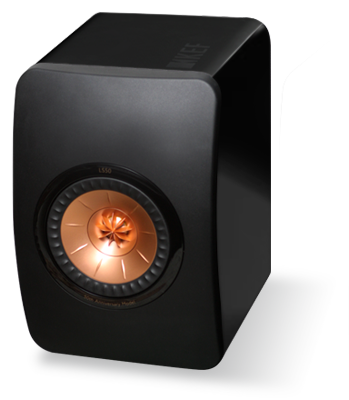 Few of the minimonitors being made today are as popular or as desirable as KEF’s LS50 ($1499.99 USD per pair). Doug Schneider reviewed the KEF LS50 in April 2013, when it received a Reviewers’ Choice award.

KEF says that the LS50 was inspired by the legendary BBC LS3/5a, a 1970s speaker designed for the BBC specifically to be a studio-grade monitor, which the broadcaster then licensed to various companies to manufacture. KEF was intrinsically involved in the LS3/5a’s creation -- they made the drivers for it. The other speaker to inspire the LS50 was KEF’s Blade ($30,000/pair), introduced some two years ago and featuring technology that has been trickled down to the LS50 -- most notably, the Uni-Q driver that’s at the heart of both speakers. The Blade and the LS50 have one more thing in common: they’re two of KEF’s 50th-anniversary models, and neither is a member of any of the manufacturer’s speaker lines. Other than some shared technology, they’re both one-off designs, which only serves to heighten their appeal.

The LS50’s complex cabinet, which measures just 12”H x 8”W x 11”D, is made mostly of MDF and comes in one color: black. Cabinet resonances are minimized with internal braces and constrained-layer damping. The sculpted baffle, made of what KEF calls an “engineered polymer,” is shaped to eliminate diffraction effects. On the rear are high-quality binding posts and an oval port with a spongy center tube to help reduce port noise. There is no grille.

The LS50’s rose-colored Uni-Q driver looks similar to the silver one used in the Blade (as well as the cones used in KEF’s R-series speakers), and is replete with KEF’s innovative “tangerine” waveguide. But there are some technical differences, largely due to cost -- the Blade’s driver is built to a higher standard and sounds better. The LS50’s driver also differs in having a corrugated surround, which allows for greater cone excursions and, therefore, better bass response -- vital, since the LS50 is a two-way design whose 5.25” cone is responsible for reproducing all frequencies from about 2200Hz down.

KEF specifies the LS50’s -6dB low-frequency limit as being a respectable 47Hz -- somewhat limited compared to a design with full-range extension (i.e., down to 20Hz), but impressive for a minimonitor, and decent enough for use in smaller rooms. According to Doug’s review, the LS50’s bass “was far fuller, deeper, and richer than I thought could ever be mustered by a 5.25” driver in a 1’-tall box.” 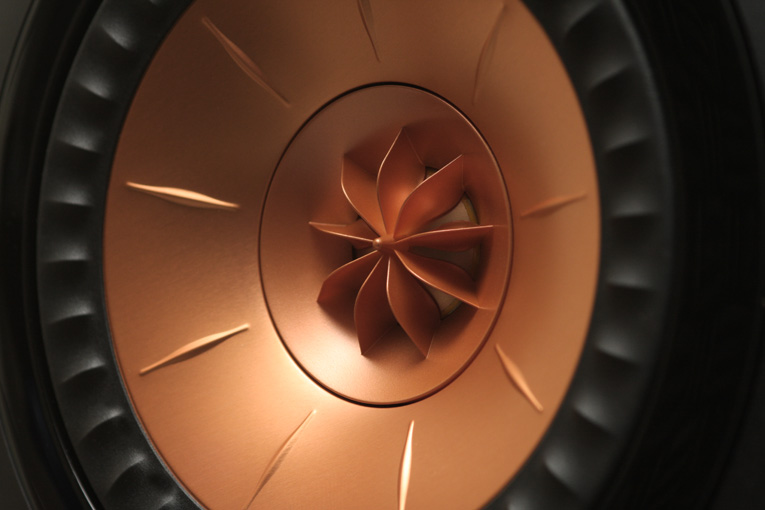 Doug again: “The diminutive LS50s sounded much bigger than their size let on. I also learned that, with any of these amps, the LS50s could play loud -- louder than I expected from speakers of their size, and louder than I really needed them to.” The LS50’s ability to play loud was corroborated by our distortion tests, which revealed exceptionally low distortion from about 200Hz up when measured, in the anechoic chamber at Canada’s NRC, at an SPL of 90dB from a distance of 2m (equivalent to about 99dB in-room at 1m, or extremely loud).

But bass depth and output capability aren’t the LS50’s true strengths; in other performance areas, it steps ahead not only of its like-priced competitors, but also of speakers that are many times its price and size. One of those areas is soundstaging, an inherent strength of KEF’s Uni-Q drivers, which effectively operate as point sources for all audio frequencies. Doug described this as follows: “[The LS50s] ‘disappeared’ completely into those vast soundstages, giving no aural hint of their actual physical locations. The fine 24/176.4 recording of Cat Stevens’s 1970 classic Tea for the Tillerman, which HDtracks offers for download, was rendered with excellent soundstage spreads from left to right and from front to back. What floored me wasn’t only the scope of that stage, but the specificity within it -- musicians popped up almost holographically in their correct spaces, with real presence.”

Another of the LS50’s particular strengths has to do with its unique voicing: “It made this big-sounding little speaker sound so natural and real that I’m pretty sure it could give a number of much costlier speakers, stand-mounted and floorstanding, grief.” He also found that the LS50 sounded exceptionally natural and realistic, particularly with voices: “Buena Vista Social Club Presents Omara Portuondo (16/44.1 FLAC, Nonesuch) exploded into my room with a stage that went from here to there, and Portuondo’s voice was placed in the center of it in an extraordinarily lifelike way: tonally accurate, vividly positioned, richly textured, totally tangible, and completely authentic. Leonard Cohen’s thick, rich voice in ‘Amen,’ from his most recent release, Old Ideas (16/44.1 FLAC, Columbia), was rendered with the same combination of fullness and detail that I heard through the R500s, a speaker I praised for its outstanding midrange performance, [and] which I felt could easily be compared with those of speakers costing multiples of its price -- which means that what the LS50 offers for its price borders on the revelatory.”

Also impressive were recordings of acoustic piano, a notoriously tough instrument for most speakers to reproduce, particularly small ones. Yet Doug had this to say: “The LS50s made Ola Gjeillo’s piano-based Stone Rose (16/44.1 FLAC, 2L) sound thundering and glorious in a way I thought no small speaker ever could. And if I had to describe in a single word the LS50s’ reproduction of Norika Ogawa’s recording of Mozart’s Piano Sonatas 10-12 (24/96 FLAC, BIS/eClassical.com), that word would be pure. Every keystroke was presented with a crystalline clarity that wasn’t only uncanny for the LS50s’ price, but for multiples of it.”

KEF’s LS50 is the least-expensive speaker we’ve included in our list of Recommended Reference Components, which will make budget-conscious buyers happy. But it’s also the most limited in bass reproduction, which will mandate that it be used in fairly small rooms, by listeners who don’t require full-range low-end extension. Nonetheless, we include it here because the LS50 is an exceptionally good overall performer that can provide top-quality sound belying the speaker’s small size and low price. In the “Conclusions” section of his review, Doug called it a “masterpiece of a minimonitor” and said: “The LS50’s sound, irrespective of price, was outstanding in my room: a wide-open soundfield; razor-sharp imaging; voluminous bass; soaring, clean highs; and a midband as natural as it was clear. Holy moly, this speaker sounded good -- and at a ridiculously low price.”