Esoteric, the high-end division of TEAC, is best known for its digital products: transports, DACs, clocks, and disc players. But Esoteric’s product line is broader and more accomplished -- they also make outstanding amplifiers and preamplifiers (and, at one time, made speakers), including the top-of-the-line Master Sound Works C-02 preamplifier, which Howard Kneller reviewed for SoundStage! Ultra in February and described as “transcendent.” The C-02 retails for $24,750 USD without phono stage, $26,500 with (Howard reviewed the former).

Most preamps are fairly light, but the C-02, which measures 17.4”W x 6.3”H x 17.8”D and features stunning aluminum casework, weighs 71 pounds. Howard described its size and weight as “power-amp-like” and the quality of its casework as “museum-worthy.”

Although it has many, Howard wrote that “The C-02’s preeminent feature is undoubtedly its dual-mono design. In some dual-mono preamps, the left and right channels are routed through the opposite sides of a single circuit board, while others employ mirror-imaged boards. In both cases, the mono signals proceed through paths that typically differ in length, direction, and/or location within the case. The C-02 is atypical in having two identical boards, to give the two channels identical signal paths.

“As is standard in dual-mono designs, each of the C-02’s channels has its own separate power supply. However, the C-02 is atypical in that each channel’s circuitry contains two transformers. In fact, a total of five transformers is used: one each for the input and output of each channel, and a fifth for the control section. Among other benefits, this is claimed to significantly reduce interchannel crosstalk and noise.” 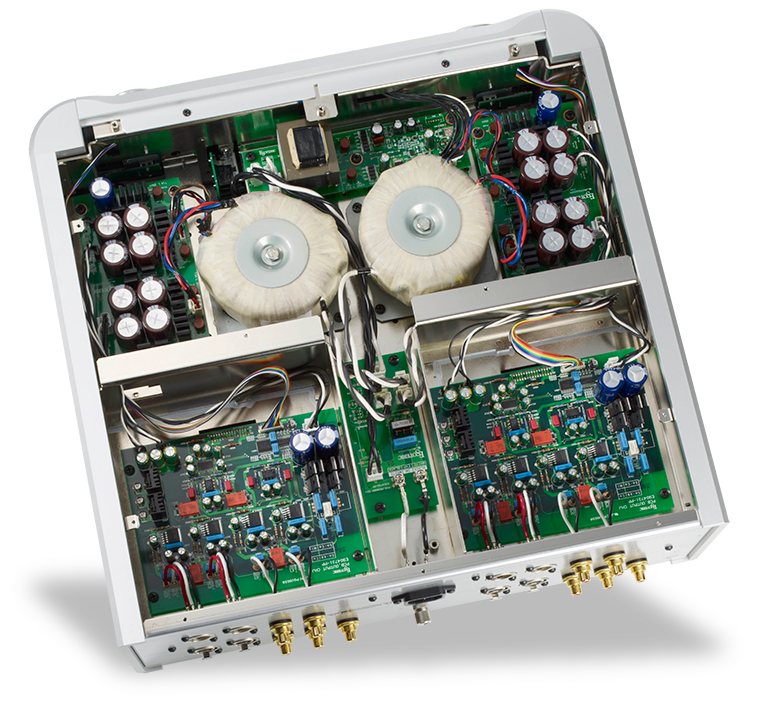 Also noteworthy is Esoteric’s unique Quad Volume Control System (QVCS), which Howard described: “Changing the volume alters the gain in each of the C-02’s four circuits: a positive and negative for each of the two stereo channels. Many volume controls alter the gain in only two circuits, which, Esoteric says, may cause a gain imbalance between channels of up to 5%. Although such imbalances are rarely severe enough to be audible, the work that has gone into the QVCS illustrates the lengths to which Esoteric will go to create as perfect a product as possible.”

Howard praised the C-02’s “airy sound,” “very tight and extremely focused images,” “extraordinary soundfield,” “lightning-fast transients,” “truly ‘black’ background,” and “ravishing midrange,” yet what most impressed him wasn’t any single characteristic of the sound, but how realistic it was overall: “it didn’t sound merely transparent -- instead, it had a next-generation ability to produce realistic-sounding music, as it stunningly demonstrated with several recitatives -- the half-sung, half-spoken passages in opera of the 18th and early 19th centuries. . . .

“. . . The voicing was so unveiled, the background so quiet, and the timing so right that I have very rarely, if ever, heard anything like it. These qualities combined to create a flesh-and-bones palpability that would be a privilege for any opera fan to hear.”

Howard went on to say that he was “unprepared for how the C-02 uncovered the inner details of overtones, and thus how it delineated timbres. . . .

“. . . in Beethoven’s Symphony No.1, the C-02 mastered the high-end overtones, and thus parsed the timbres, of the violins and violas. In other recordings, it identified the unique timbres of instruments such as the piccolo and flute, as well as cello and double bass -- this despite the fact that the pitches of these instruments overlap outside the middle registers, which typically wreaks havoc with a component’s ability to convey timbre. Ace the ends, and the middle -- where the sounds of most instruments exist -- is typically a cakewalk.

“Getting the non-fundamental frequencies right is one of the most challenging tasks an audio component faces. That the C-02 did so with such aplomb is enough to place it in the company of the very best reference components.”

Conspicuously absent from the review were any criticisms, with one exception: the product’s three-year warranty, which Howard felt was too short, particularly in light of the C-02’s high cost. As he said, the warranty should really be five years, which is more or less the industry standard.

Aside from that quibble, there was nothing that Howard could point to as a flaw, which explains his “Conclusion”: “The Esoteric Master Sound Works C-02 is one of the very few preamplifiers that does it all. It has a fast, unveiled, and ultra-realistic sound; it’s full, refined, and romantic in the midrange; and it’s extremely revealing of timbres, even with respect to the most challenging instruments. These are all things I won’t be soon forgetting.”

Nor will we forget the C-02 -- which is why, this month, we add it to our list of Recommended Reference Components. If you’re shopping for a state-of-the-art preamplifier, you shouldn’t forget it either.