Want a great meal from a Michelin-starred chef? You’ll never get one for the cost of a McDonald’s Happy Meal. Want to buy a hand-tailored shirt created by a famed fashion designer? You won’t find it at Costco, or anywhere at a Costco price. Want a loudspeaker from one of the world’s greatest speaker designers? Now, that you can have, and for about as much as you’d pay for a mass-market wireless speaker.

For decades, Paul Barton has been lauded as one of the world’s top speaker designers. Through PSB Speakers, the brand that bears the initials of Paul and Sue Barton, he’s consistently created great loudspeakers that even the most tightfisted audiophile can afford. That’s not to say Barton can’t or doesn’t create expensive speakers -- he can, he has, and he still does. But Barton has told me that he loves creating inexpensive speakers because, with them, he can reach the largest number of people. And with his new Alpha P3, a two-way, two-driver minimonitor, he has the best chance yet of reaching more people than ever -- at only $199 USD/pair, it’s the lowest-priced PSB speaker in years.

PSB’s new Alpha series debuted in January, at the 2019 Consumer Electronics Show; the P3 is the smallest, least expensive main-channel model in the line. Above it are the P5, a larger two-way, two-driver minimonitor ($349/pair); the T20, a compact two-way, three-driver floorstander ($599/pair); and the C10 center channel ($299). (See Brent Butterworth’s report on the Alpha line’s CES debut on our sister site SoundStage! Global.) 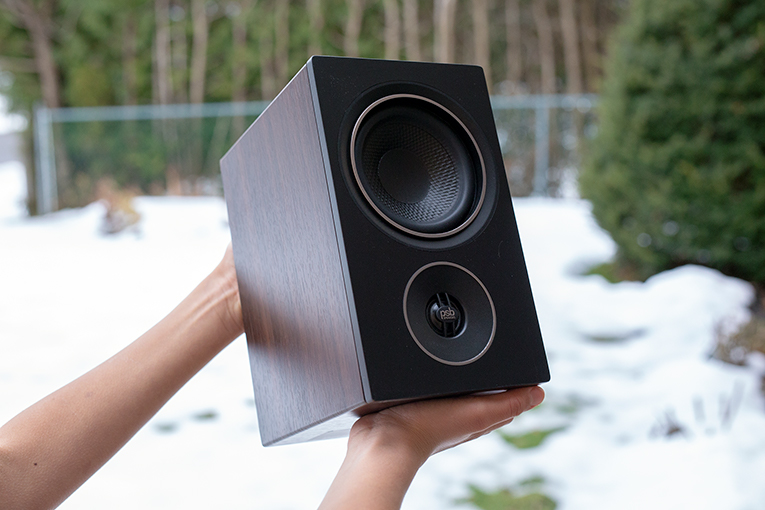 I received an advance pair of Alpha P3s in December and immediately unboxed them. The first thing I noticed was that the speaker is so small and light -- only 8.7”H x 5.1”W x 6.9”D and 4.9 pounds -- that my 12-year-old could easily hold it in his outstretched hands (see photo). But as I rapped my knuckles on all its surfaces, it felt solidly made, despite its light weight. I also loved the styling -- the color of the American Walnut vinyl veneer on my review samples contrasted well with the all-black front baffle and the magnetically attached, dark-gray metal grilles. (Black Ash vinyl is also available.) Another nice cosmetic touch is the subtle rounding of the top and bottom side edges, which looks more refined than sharp edges.

Complementing this look was something I added: two AudioQuest SorboGel Q-Feet under each speaker, at front and rear. These feet not only raised the speakers off the shelf, for a nicer appearance, they also, more important, minimized the transference of vibrations from speakers to shelf. I needed only two Q-Feet per speaker because the feet are fairly wide -- had I used two across the front and rear, they’d have stuck out past the speaker on either side. And at $99.95 for a set of four Q-Feet, you’d be spending as much for feet as for speakers. 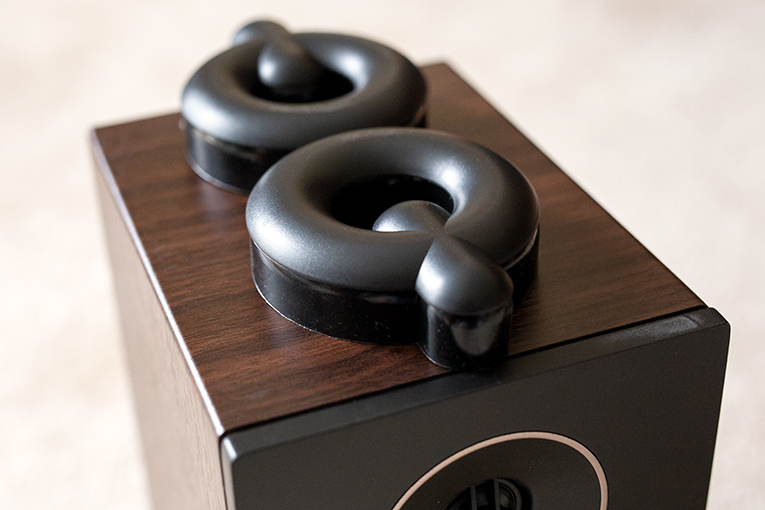 The P3 has a 4” midrange-woofer with a textured-polypropylene cone and a rubber surround, and below it -- not above it, as in most two-ways -- is a 0.75” tweeter with a black-anodized aluminum dome, and a phase plug that bears PSB’s logo. Flanges around both drivers conceal any mounting bolts, for a tidier appearance. The drivers hand off to each other at 3kHz via a Linkwitz-Riley crossover with fourth-order slopes. To ensure adequate power handling, Barton has armed the little midrange-woofer with a two-layered voice-coil and a powerful motor, and the tweeter with ferrofluid cooling and a neodymium magnet.

For my listening tests, I drove the P3s with an NAD D 3045 integrated amplifier-DAC via AudioQuest Q2 speaker cables. A Chromecast Audio streamer fed one of the D 3045’s TosLink inputs. I also connected a U-Turn Audio Orbit Plus turntable, using its stock phono cable. 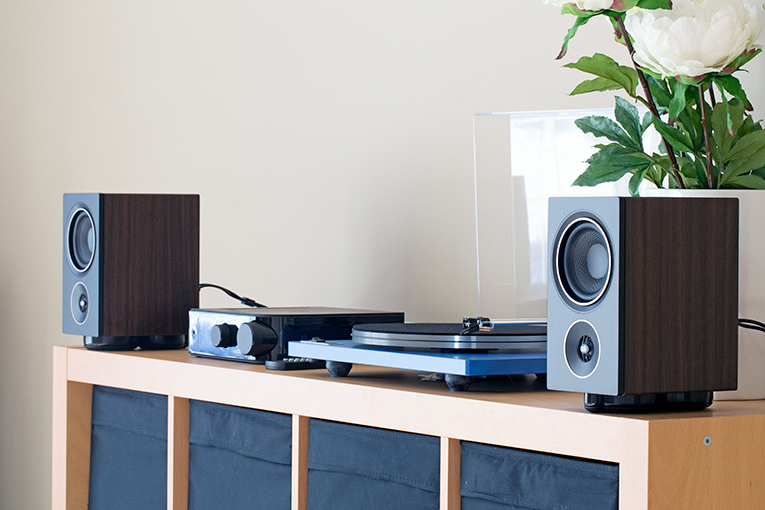 PSB specifies the P3’s on-axis frequency response as 57Hz-21kHz, ±3dB. The top end of that range seems plausible, but I had doubts about that little 4” midrange-woofer and tiny cabinet going down as low as 57Hz. I tested that spec using MassEducation by St. Vincent, aka Annie Erin Clark (16-bit/44.1kHz FLAC, Loma Vista/Tidal). I love everything on this all-acoustic album, but “Los Ageless” stands out for a very robust-sounding piano thundering home the bass, and St. Vincent’s earnest, passionate singing -- every time I listen, I can’t help being drawn right into her voice.

It was clear that the P3s couldn’t reproduce the piano’s lowest notes. By my best guesstimate, at least the bottom octave and a half of the audioband had gone AWOL -- I heard nothing below about 60Hz. Of course, that’s not surprising for so small a speaker; little woofers in little cabinets don’t produce much bass. In contrast, the Q Acoustics 3020i ($299.99/pair) and Paradigm Monitor SE Atom ($298/pair) -- considerably larger and pricier two-ways, each with a 6.5” midrange-woofer -- can generate a lot more low-frequency heft with “Los Ageless,” and sound quite a bit fuller and fill my room a little more. The P3s sounded lighter and thinner, something that could be overcome with the addition of a small subwoofer -- or by opting for a pair of PSB P5s, which have a 5.25” midrange-woofer and a bigger cabinet. 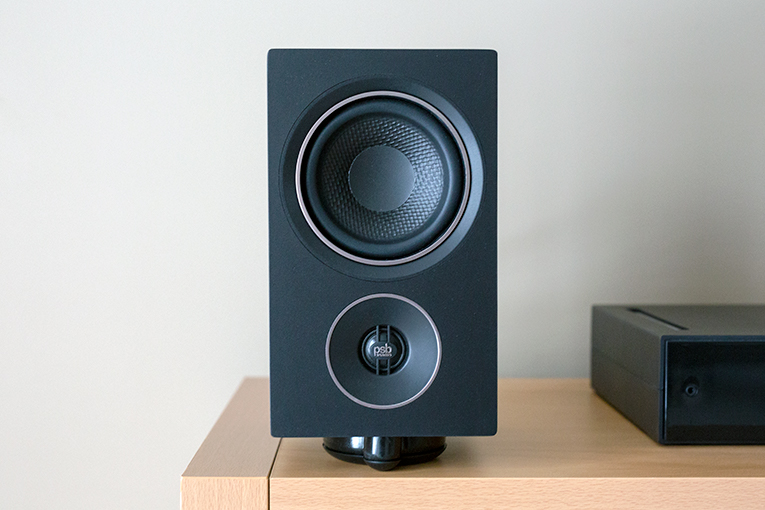 The little Alpha P3s also reproduced St. Vincent’s voice every bit as clearly as do the 3020i’s or Atoms. I was taken aback by the P3’s superbly extended highs -- the tweeter reached to the sonic stratosphere with an ease and pristine clarity I’d expect from $1000/pair speakers. And they sounded sparklingly clean throughout the bandwidth they could ably reproduce -- for everything above the low bass, the P3s sounded shockingly refined and superbly detailed for speakers costing only $199/pair. Last, the P3s sounded very open and “boxless” -- whether I played “Los Ageless” or any of the other great tracks on this album, the sound had a spaciousness that belied the P3’s small size.

Sides 2 and 1 of Fleetwood Mac’s Rumours (LP, Warner Bros.), listened to in their entireties and in that order on a particularly wintry day up here in Canada, proved a synergistic match with the P3s. Mick Fleetwood’s muscular drumming seemed to push those little 4” woofers for all they were worth, and they responded ably -- not by reproducing the deepest bass I’ve heard from this album, but by putting out a nonetheless gutsy, fairly fulsome sound that never sounded too lightweight. Nor did I have any problem getting the P3s to play loud -- their woofers never bottomed out, and the entire audioband remained composed even when I pushed the SPLs past levels that anyone would consider sane for speakers of this size.

But where the P3s really shone was, again, in the midrange and highs. Clean, clean, clean, kept running through my mind, especially as I listened to the spirited “Never Going Back Again.” This track is dominated by acoustic guitar, and Lindsey Buckingham’s plucked notes sounded dynamic and sharp, as they should; his voice, too, was as natural and detailed as I’ve heard from speakers costing multiples of the P3’s price. 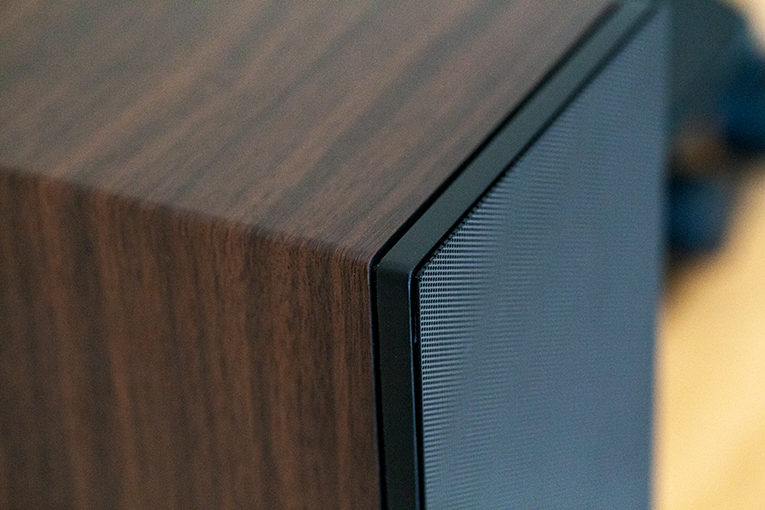 Kate Bush’s Hounds of Love (LP, EMI America ST-17171) was also reproduced well, though not for the same reasons. I felt I wasn’t missing much in terms of bass reach through the Alpha P3s because I’ve always found the bass on this LP, which I bought in the 1980s, to be limited and a little muddled no matter what speakers I hear it through. Instead, the focus was on Bush’s voice, which the P3s reproduced as well as did the Q Acoustics 3020i’s and the Paradigm Monitor SE Atoms.

I then left the P3s in my “System One” setup for several weeks, and encouraged my wife to play her Latin-music Tidal playlists as often as possible and let me know what she thought. She has no particular love for any speaker brand, so in terms of sound quality, I always get her unbiased opinion. In terms of appearance, she liked the P3s as much as she liked the Q 3020i’s, which she liked a lot, though for different reasons. It was the Qs’ Arctic White finish and generously curved top and bottom side edges that caught her eye; with the PSBs, she seemed to most like the American Walnut finish, its contrast with the black baffle, and especially their very small size. I wasn’t surprised -- after all, the most décor-friendly design aesthetic for speakers is small and nearly invisible. 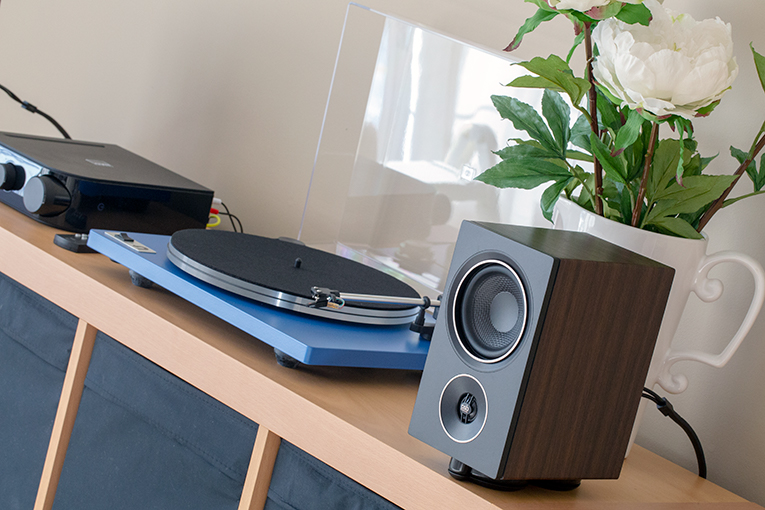 My wife could tell that the P3s lacked the bass extension she’s used to hearing from the Qs and Paradigms, but it wasn’t so limited as to put her off -- she played the PSBs for hours on many days, and never had a single criticism of their sound. But with the music she played, I noticed something important: Like Rumours, in which Mick Fleetwood’s heavy drumming made the most of the P3’s limited bass output, many of the tracks she listens to have bass-heavy mixes that enhance their rhythm, drive, and danceability -- this seemed to force the P3s’ woofers to work more, and made the sound fuller.

A good example was “Vivir Mi Vida,” from Marc Anthony’s 3.0 (16/44.1 FLAC, Sony Music Latin/Tidal). I was surprised at how punchy and dynamic the P3s sounded in the bass, and how clean Anthony’s voice and the percussive elements remained, even when my wife played this track the way she likes it: very loud. And yes, “Vivir Mi Vida,” which has a lot of content in what is probably the top of the sub-bass region (around 50-60Hz), made the P3s sound fuller and more dynamic without pushing their woofers past their limits. More noteworthy in this regard was Anthony’s “Aguanile,” from his soundtrack album for El Cantante, in which he costars with Jennifer Lopez (16/44.1 FLAC, Sony Norte/Tidal). The voices sounded exceptionally clear, as I’d already come to expect from these speakers, and percussion instruments were reproduced with startling dynamics. This song was a real ear-opener -- the bass sounded much deeper than any of the other tracks had hinted at, as if a little subwoofer had suddenly been turned on. How full the P3s’ bass sounds, then, may have a lot to do with what music you play through them. Try a pair and see . . . 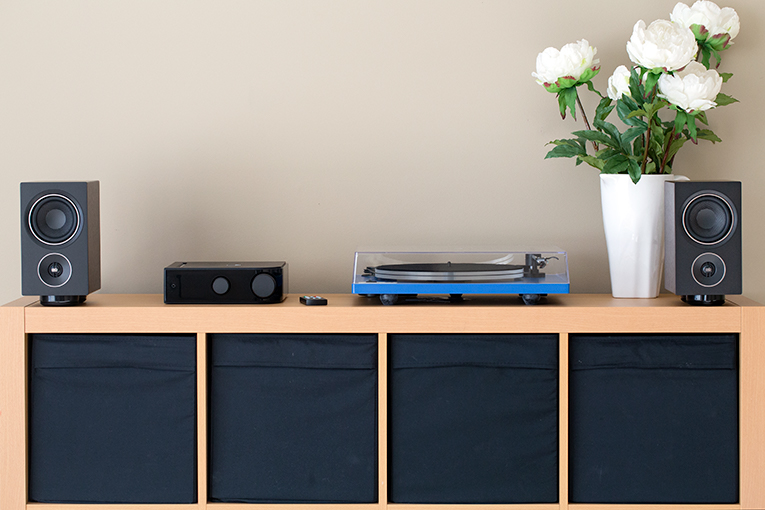 Paul Barton was the first speaker designer to tell me that his craft is a balance of compromises -- no speaker, no matter the cost, can be perfect, so the good designer tries to emphasize strengths and deemphasize weaknesses. By using a small woofer in a small cabinet, Barton has deliberately forgone deep-bass extension to focus on getting the other aspects of the audioband exactly right. And he has. That said, he’s still managed to provide just enough bass output that a pair of Alpha P3s doesn’t sound too light -- and may even sound surprisingly full, depending on the type of music you play. The strengths Barton has emphasized easily outweigh the P3’s limitations in the bass, and make this small, inexpensive speaker something special.

From the upper bass through the midrange and on to the highs, I found that the PSB Alpha P3s sounded commendably clean, dynamic, and free. Those who’ve heard a few other $200/pair speakers may be astounded at the clarity and overall quality of music reproduction they offer. For budget-minded audiophiles who value quality over quantity of sound, PSB’s Alpha P3 is tiny and inexpensive -- and, for all that, no less a gem from a world master of loudspeaker design.