When people visit my house, particularly my main listening room, they’re often taken aback by how much hi-fi gear they see. With what’s in the room now, I could set up half a dozen complete systems, priced from $1000 to over $100,000. This is partly why I’ve been able to review the inexpensive gear that appears in this column as well as the stratospherically priced stuff that shows up in my full equipment reviews. Suffice it to say that, regardless of its retail price, I can almost always evaluate a review product in the context of a system comprising components of commensurate price that I know well.

When I began writing this column, I was content to place stand-mounted speakers on the same shelving unit that supports an integrated amplifier and sometimes a turntable. But when I received for review a pair of Totem Acoustic’s new Skylight minimonitors ($1000 USD/pair), I found myself in a quandary. I knew I wanted to place these speakers on separate stands so that they could sound their best. My problem: I didn’t have the right stands. 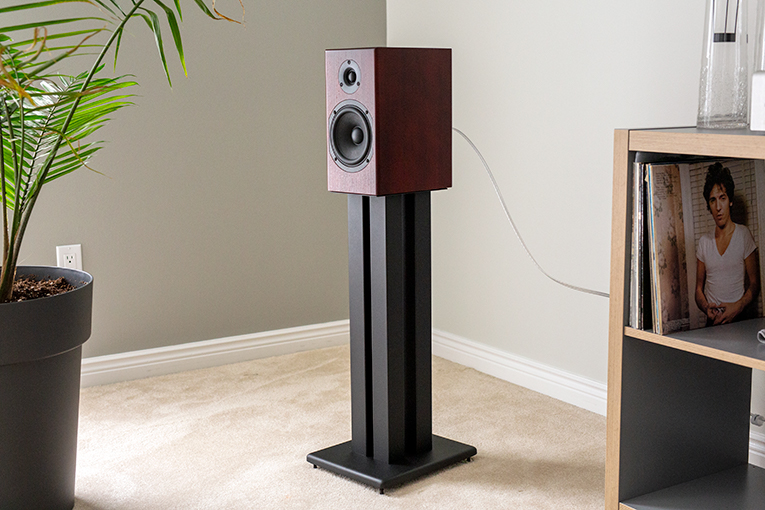 Oh, I had stands -- three pairs I could have used, had I wanted to just stick the Skylights atop any ol’ thing. But for one reason or another, none was entirely appropriate. My favorite speaker stands are made by Foundation, but they cost about as much as the Totems themselves -- didn’t make much sense, particularly for this column. The other two stands each cost less, if you could still buy them -- both manufacturers have been out of business for at least a decade. I figured that the stands most appropriate for the Totem Skylights needed to be reasonably priced and, of course, available now -- if readers wanted to replicate my setup, they could.

It didn’t take me long to find what looked like just the thing: Monoprice’s Monolith speaker stand, which is sold singly in heights of 24” ($54.99), 28” ($59.99), and 32” ($69.99). From what I could see in the photos on Amazon or on Monoprice’s own website, the Monoliths looked well built for these prices. The biggest decision I had to make was which height to get.

To me, 32”-tall stands always seem too high for everything except rear surround speakers. I thought the 28” Monolith would probably be ideal for the Skylight, which is pretty small, but I nonetheless decided to go with the 24” model, to use with larger minimonitors I might review in the future -- and for greater stability. My System One setup is in our living room, and my nine-year-old son has already accidentally kicked over one floorstanding speaker and gouged its cabinet beyond repair. I don’t want him to try his luck with a pair of top-heavy stand-mounts perched precariously on stands high enough to make them easy to topple and do some real damage, to the speakers or himself, or whatever else they might fall on. 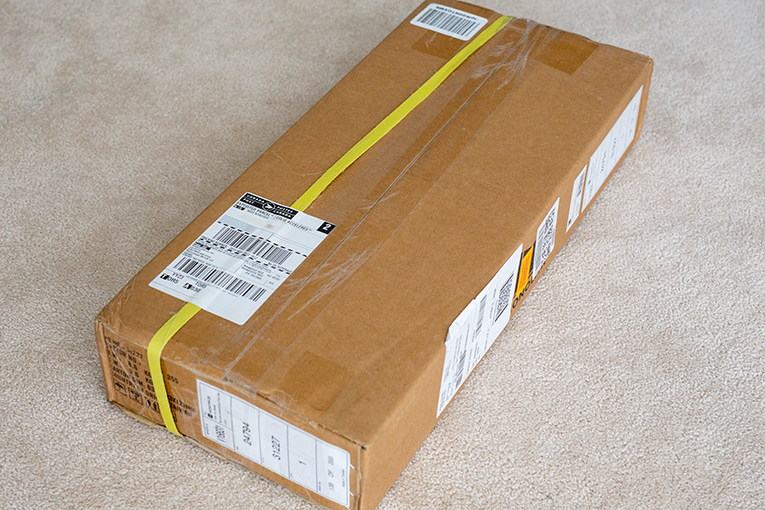 Instead of asking Monoprice to send me a loaner pair for review, or even to buy directly from them, I placed my order with Amazon -- I knew they’d arrive the following day. The two boxes did arrive the next day, but travel and other work meant that they and the Skylights stayed in their boxes another three months. But the delay proved fortuitous -- it gave me an opportunity to sample Monoprice’s customer service.

When I finally got around to unpacking and assembling the Monoliths, it went relatively quickly and easily. Each stand has a small top plate and a large bottom plate that you bolt to four 2”-square columns, each almost 24” high. All pieces are made of heavy-duty steel in a black powder-coat finish. Monoprice supplies an Allen key for the small, black top-plate bolts, but you have to use your own Phillips screwdriver for the larger, silvery bottom-plate bolts. Four little self-adhesive, rubberized pads are supplied to affix to the top of the top plate, to provide some separation from and damping of the speaker. Done. 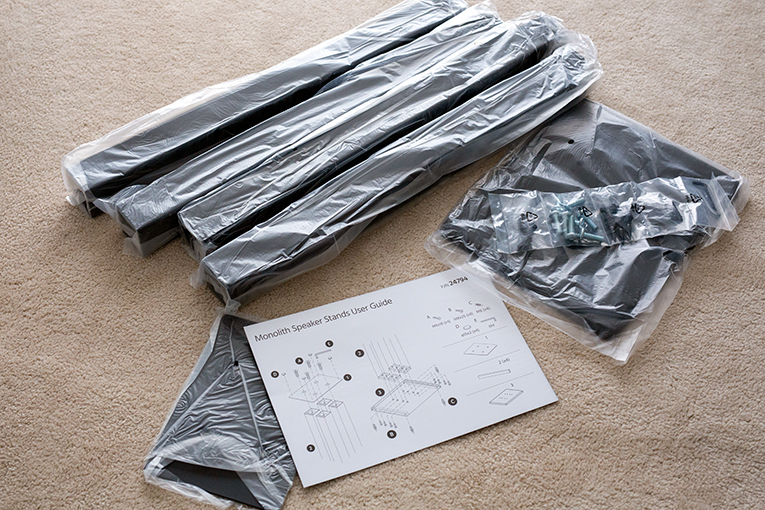 All in all, assembling the first stand took me, at most, five minutes. When I was done, I was surprised at how solid, heavy, and sturdy the entire structure was -- not as much as my welded-together Foundation stands, but more than I’ve seen on any other stand costing anywhere near $109.98/pair. The Monoliths also seem far more durable than typically is the case with stands at this price, which are often made from lighter metals or wood.

But I hit a snag with the final step of assembly: screwing into the bottom of the base plate four big carpet-piercing spikes. I wanted to use these because the Monoliths would be sitting on a thickly carpeted floor. Three of them went in fine, but the fourth wouldn’t screw in properly. I looked more closely at the bottom of the base plate and saw that a little bulge of metal was partially blocking the threaded hole -- a manufacturing flaw that may have occurred when the plate overheated during drilling. I tried to pry off the bulge with a screwdriver, but no go -- it was part and parcel of the hole. I went on to assemble the other stand, to see if it had the same problem, but the plate easily accepted all four bolts. 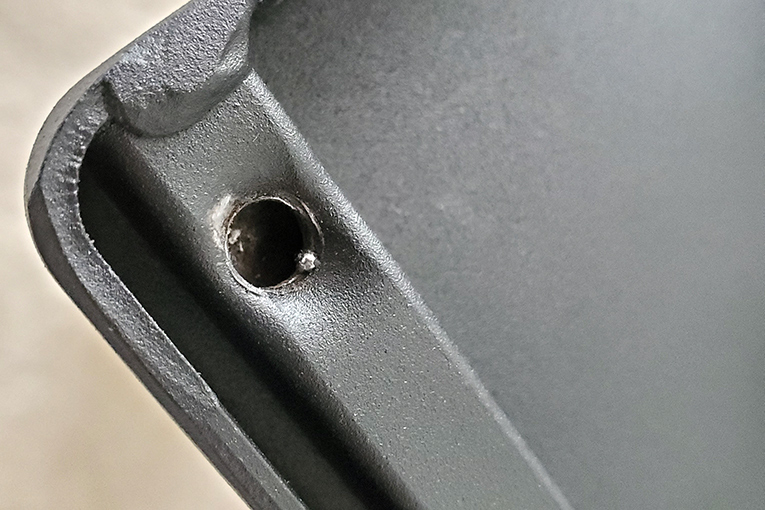 I looked up my original Amazon order and found that the return date was long past. I was about to call and implore Amazon’s customer service to do something about it when I noticed a sheet of paper in one stand’s box. This was from Monoprice, thanking me for my order and saying that if I had any trouble with the stand, I should e-mail tech@monoprice.com or support@monoprice.com. Before I did, I used my phone to snap a close-up photo of the offending bolt hole (see above) to attach to my e-mail, and sent it off. 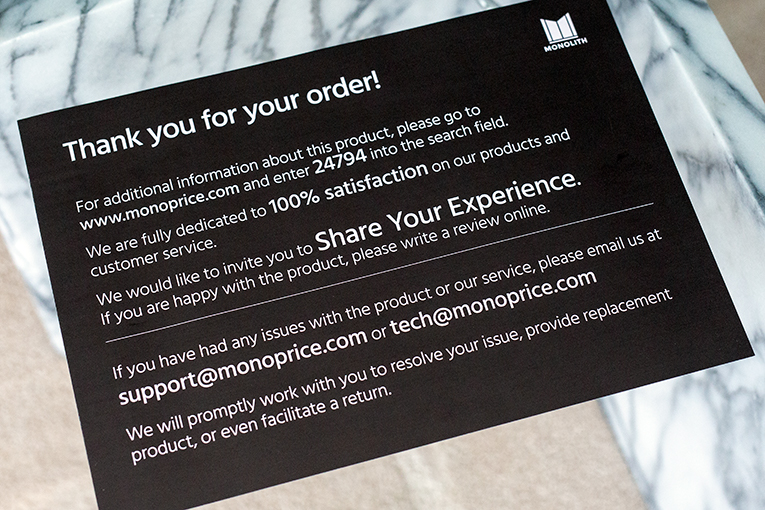 For the next five minutes I repeatedly reloaded my e-mail client, hoping for an immediate reply from Monoprice -- after all, what else did they have to do other than wait around to serve me? No reply, but I figured this was forgivable -- it was a Sunday.

The next morning, I saw that a Curtis G. had replied and asked that I send him my Amazon invoice, which I did right away. I didn’t hear back from Curtis G. until the next day, but when I did, I was happy to read that Monoprice was sending me an entirely new stand to replace the defective one, no questions asked. It arrived two days later.

Nowadays, when so many of us expect instantaneous communication and resolution of any problems we might have with something we’ve bought, a few days can seem an eternity. But I’m more than satisfied. Monoprice responded within a reasonable timeframe, I was never left to feel that the problem wouldn’t be resolved, and an entire replacement was shipped at no charge. That’s good service.

And the Monolith is a great product. When I ordered them, I expected them to be of decent quality. From Brent Butterworth’s reviews of Monoprice’s headphones and headphone amplifiers on SoundStage! Solo I’ve learned that the company is well versed in offering top-quality products at bargain-basement prices. But I never expected the thickness of metal, quality of finish, and solidity of each assembled stand -- those are things I’d expect only in a stand costing at least three times as much. 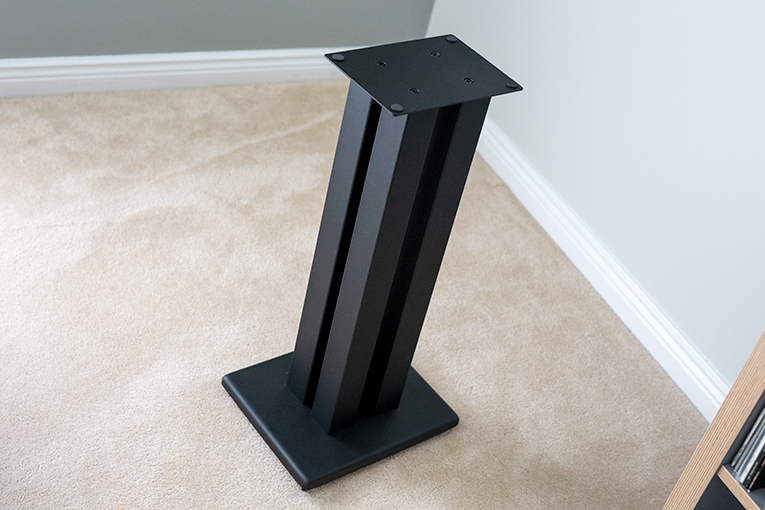 My only concern is whether or not the big silver bolts that hold the bottom plate on will loosen over time and need to be retightened. I’m not concerned about the top bolts, which are countersunk and ultra-secure, but the bottom ones go straight in with no countersinking, and no lock washers are supplied. I can easily imagine vibrations from the speaker loosening these bolts over time. If that happens, I’ll likely slip in some lock washers, which cost only a few cents.

A concern that others might have is the stand’s square columns, which are hollow -- if you knock on one, it rings a bit, which is never good for a stand. You want them to be as dead -- i.e., nonresonant -- as possible. But I don’t hold that against Monoprice -- all hollow metal tubes ring. The way to keep them from doing this is what Foundation and many other makers of stands do: fill the tubes with sand or lead shot or some other substance (I don’t know what Foundation uses, and their stands’ columns are welded shut). This can easily be done with the Monoprice stands by funneling sand or shot down into the columns through the top bolt holes before inserting the bolts. I haven’t filled mine, and unless I notice problems with ringing, I don’t think I will. But the hardcore enthusiast who wants to, er, wring every bit of performance from a hollow-legged stand might consider it.

Since I’ve already paid for the Monoprice Monoliths, you and I both can now consider them a permanent fixture in System One, both for the Totem Acoustic Skylights and any other stand-mounted minimonitor I review for this column. They’re a stone-cold steal for the price, and a perfect addition to System One.