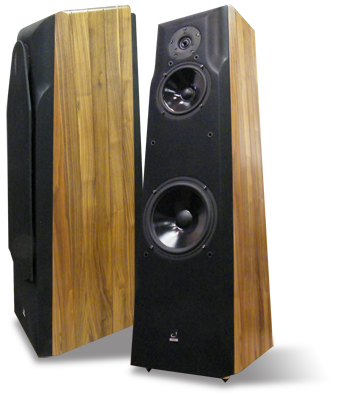 Grant Fidelity’s Ian Grant has a knack for singling out great audio products of Chinese origin. Exactly two years ago I reviewed the company’s excellent RITA-880 integrated tube amp -- later named SoundStage! AV’s Best Product Debut of 2008 -- and every time I visit the Grant Fidelity room at an audio show I hear something interesting. The Compact WZ-5 SE Collector’s Edition loudspeaker ($4500 USD per pair) was not among the products I’ve sampled at shows, but based on my favorable impressions of the company’s electronic components, I was eager to hear if their speakers could live up to that standard.

Compact is a Chinese speaker manufacturer of some renown in its homeland, but in the West it’s not a household name, even among audiophiles. Most won’t know, then, that the basic WZ-5 was developed by Compact eight years ago, or that the WZ-5 SE is the result of a number of updates and redesigns to meet what Grant Fidelity calls “the current popularity of high-resolution music.”

The WZ-5 SE Collector’s Edition is physically imposing, standing 41"H x 11.8"W x 17"D and weighing 73 pounds. The WZ-5’s looks are reminiscent of something Italian speaker maker Sonus Faber might produce, though the Chinese design doesn’t have quite as high a level of fit’n’finish. Still, the WZ-5 SE looks elegant in its finish of lightly polished American walnut on the sides and top. The baffle is 1.7" (43mm) thick and is rounded at the top end, which helps the baffle visually blend in with the rest of the speaker. Included with each speaker are four adjustable, conical spiked feet.

Although the sides of the WZ-5 are finished in that lovely walnut, the black-painted baffle is wrapped in the same loose-weave material used for the grillecloth. The grille is shaped with a rounded triangle form on top, where it is only slightly wider than the 1” Vifa ring-radiator tweeter; it doesn’t hide the curves of the baffle, and increases in width as it descends the baffle to cover the coated-paper-cone 6.5” midrange and 8” woofer. The loose weave of the baffle material offers two bonuses: It’s transparent to sound as well as light, so the drivers can be both seen and heard without interference. The crossover network is hand-wired point to point.

The WZ-5 SE’s rear panel is finished in a material that looks like paint but feels like leather. Here are dual sets of five-way binding posts with gold-plated jumpers and, near the bottom, a single port for venting the woofer compartment. Grant Fidelity recommends amplifiers of 40-180Wpc output, and specifies the WZ-5’s frequency response as 38Hz-40kHz, its sensitivity as 90dB, ±3dB, and its impedance as 4 ohms.

When, after breaking in the Grant Compacts for some 100 hours, I began listening, I found myself wondering if that 90dB sensitivity rating wasn’t a bit optimistic. Compared to my easy-to-drive, 93dB-sensitive Definitive Technology Mythos ST speakers, the WZ-5 SE Collector’s Edition seemed to demand a lot more power from my Simaudio Moon i5.3 integrated amplifier -- despite the fact that the Grant’s 4-ohm impedance makes the i5.3 almost twice as powerful than it is with the 8-ohm Def Techs. Based on the fact that the WZ-5 required about 6dB more on the volume control to achieve the same perceived sound output as the Mythos, I suspect that the WZ-5’s in-room sensitivity is more like 85 or 86dB.

My memories of the RITA-880 integrated tube amp ($3750), which I’d liked so much in 2008, were still fresh. Here was a relatively expensive Chinese-made product that could hold its head high among even-higher-priced competition from its Western rivals. Would the Compact speaker cause free-world speaker designers some sleepless nights?

Not so much. The WZ-5 SE was somewhat unusual in committing errors of omission and commission in the same frequency band. Usually, a nonneutral speaker is, say, consistently hot or soft in the treble, or recessed or forward in the midrange. Paradoxically, the WZ-5 SE CE was all these things, and more.

In the bass, the WZ-5 went deep, often surprising me with its ability to shake the house without the help of a subwoofer. Cases in point were “The Train Song” and “Jersey Girl,” from Holly Cole’s Temptation (CD, Blue Note 31653). These Tom Waits tunes showcase the deep, melodic bass so often in abundance on Cole’s records. Playing these tracks let the WZ-5 SE strut its bass stuff -- it delivered punches to the gut on a par with Mike Tyson. At times, though, the bass also exhibited the failings of the former champ, with a slight tubbiness when the upright bass hit its lowest notes, or just a bit too much internal reverberation in sounds of the bigger tom toms and bass drums.

In its portrayal of the midrange, the WZ-5 was bipolar -- and I don’t mean that there was a second, rear-firing midrange driver mounted behind the first. Rather, with most types of music this speaker’s midrange performance was too much or too little. I’ve listened to a lot of speakers, but this was a first for me. Holly Cole is a bubbly and dynamic performer, but the WZ-5 SEs took a little of the wind out of her sails, making her seem slightly behind the music when she should have been charging out front.

On the other hand, “Devil Inside,” from The Best of INXS (CD, Rhino 78251), exhibited a forwardness -- a midrange push, if you will -- that I didn’t particularly like in one of my rock faves. Could it be that the WZ-5 was unmasking a little bit of FM radio-friendliness in the track’s production values? Maybe, but if so, every other speaker I’ve heard this recording through has missed it. The phenomenon wasn’t as serious as what’s called a suckout, in which there seems to be a big gap between the midrange output level and the rest of the signal, but the effect was easily noticeable nonetheless.

The WZ-5 was mostly well behaved in the treble, but again, the tweeter sometimes overdid things a bit. “City of Blinding Lights,” from U2’s How to Dismantle an Atomic Bomb (CD, Interscope USA 361302), for example, was as bright on the ears as its subject is on the eyes. There was definitely a fine line between the lower treble -- as exemplified by the ride cymbal and high saxophone notes in “Exactly Like You,” from Tony Bennett and k.d. Lang’s A Wonderful World (CD, Columbia 86734), which were as pleasant as ever they were through other fine speakers -- and the upper treble. The very next song on that album, “La Vie en Rose,” seems miked more closely, and so sibilants -- “love sssongs,” “la vie en rosssse” -- came across as quite grating.

For once, I had on hand for a review subject a direct competitor in price, in this case my own reference speakers, the Definitive Technology Mythos STs ($4000/pair). There are some big differences between these two speakers, not least of which are the Mythos’s built-in powered subwoofer and all-aluminum enclosure. The Mythos stands 10” taller than the Grant WZ-5 SE and is half as wide. It also has a midrange-tweeter-midrange driver layout: a 1” aluminum-dome tweeter between two 5.25” mid/woofers. An oval (6” x 10”) powered subwoofer cone and two passive radiators occupy the bottom half of the enclosure. Both are elegant-looking speakers that would suit most décors.

None of the bass, midrange, or treble phenomena exhibited by the WZ-5 SE were audible from the Mythos STs. With the Compacts, I’d completely missed that Bono sings in tune with the piano notes at the opening of “City of ,” but his warbling was easily discerned through the Definitive Technology speakers. With treble fuzz, bass bloat, and a recessed or too-forward midrange out of the way, details in “Train Song” -- the hollowness of wood blocks, the fact that a shaker and not a brushed snare stands in for the huff and puff of a steam engine, the sound of fingers plucking bass strings -- all shone through. Finally, thanks to the Mythos STs, “Devil Inside” went back to sounding like a well-executed rock recording played from a computer via state-of-the-art Amarra software, rather than with decidedly FM fidelity through the WZ-5 SEs.

The Compact WZ-5 SE Collector’s Edition isn’t a totally bad speaker, but it doesn’t perform at anywhere near the level of such peers as the Definitive Technology Mythos ST, PSB Synchrony One ($4500/pair), or even the less-expensive Paradigm Studio 100 ($3599/pair). If the WZ-5 SE CE were a $2000/pair speaker, it would fare better in comparisons, but in the ultra-competitive marketplace of $5000/pair models, it has a ways to go before it will cause any sleepless nights among the competition.