I wrote about Songlines Recordings three years ago, and I’m happy to see that the Vancouver-based label continues to champion exciting new music from the US, Canada, and Europe. Songlines had initially been producing hybrid CD/SACD discs that included 5.1 surround mixes. Unfortunately, the cost of SACD manufacturing forced the label to limit its releases to CDs, though high-resolution downloads are available through HDtracks.com in 24/88.2 or 24/96 FLAC-encoded files, as well as 16/44.1 CD-quality AIFF and 320kbps MP3. 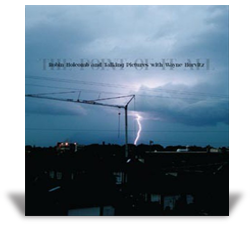 Solos (2004), the first disc on Songlines from pianist and singer Robin Holcomb, featured solo piano performances by her and her husband, Wayne Horvitz, a composer and keyboardist whose extensive discography includes six Songlines releases. Horvitz joins her once again on The Point of It All, along with the Vancouver quartet Talking Pictures. Two members of that band, leader Ron Samworth and cellist Peggy Lee, added one song each to Holcomb’s pieces, and the program is completed by an arrangement of Neil Young’s "After the Gold Rush."

"Interlude" opens the disc with the sound of tapping and rubbing on guitar strings, then a bow scraping across the cello and quick, seemingly random notes on the piano. Trumpeter Bill Clark adds a few blats here and there, and drummer Dylan van der Schyff throws some snare rolls and cymbal splashes into the seemingly chaotic mix. At the two-minute mark, the piece coalesces. At times it seems like a dirge; at others it’s a march. Like much of The Point of It All, it’s hard to classify. Holcomb’s music is abstract and, on occasion, difficult to approach, but there’s an undeniable well of passion and heart in it, and it’s those qualities that draw you in.

While The Point of It All is eclectic, the unique talents of the musicians create a consistent feel. "The Sweetest Thing" sounds like an old folk song, but the musicians surround Holcomb’s quavering voice and haunting piano with odd, atmospheric touches -- volume swells from Samworth; angular, sustained notes from Clark; and brushes on a snare drum from van der Schyff. Holcomb sings in a strong voice on the title track and accompanies herself on piano, with Lee’s cello providing a strong counterpoint. As the song builds, the rest of the band joins while Holcomb moves the song into unexpected chord changes.

Often the musicians give Holcomb spare accompaniment that builds a solid foundation for her ideas, but on some tracks, such as the Zappa-esque "Couch Alternate (alternate)," the ensemble plays a tightly arranged introductory passage before veering off into free improvisation. The piece resolves when it returns to the stated opening, and the free passages grow naturally out of Holcomb’s musical themes. Peggy Lee’s "Against the Drift," is as close as The Point of It All comes to a pop tune, and it features a soulful Hammond B3 solo by Horvitz. Holcomb’s delicate voice is absolutely right for the song’s heartbreaking melody. "After the Gold Rush" also fits her voice well, and her arrangement of the song is both strange and compelling.

Each of the musicians brings a singular voice to The Point of It All and responds with great sensitivity to Holcomb’s ideas. I’m tempted to call the music here avant-garde, but the ideas behind many of its free and dissonant passages will sound familiar to anyone who listens to free jazz or modern classical music. It’s a moving and powerful disc. 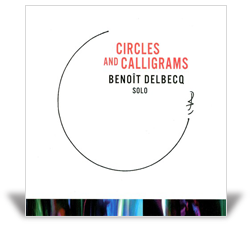 Songlines describes French pianist Benoît Delbecq as "a uniquely gifted French pianist and keyboardist who has created his own music using ideas and techniques from contemporary classical (Cage, Ligeti, Nancarrow), jazz, Pygmy polyphony, European improv, and other sources." If you wonder what Pygmy polyphony is (I did), go to http://www.pygmies.org/aka/music-dance.asp. Delbecq has recorded ten discs for Songlines, including work with the groups Kartet and Poolplayers. He has two new releases with the label: Circles and Calligrams, featuring ten pieces for solo piano, and The Sixth Jump, which features his trio with Jean-Jacques Avenel on bass and Emile Biayenda on drums and percussion.

The percussion sounds on the title track from Circles and Calligrams are, I soon realized, the result of dampened and retuned piano strings -- prepared piano, in other words. While a few of the pieces feature Delbecq alone at the piano, on most he establishes a percussion or melody line (often both) and solos over them. At times the effect Delbecq creates is vaguely electronic, as on "Ando." Delbecq plays a repetitive, lower-register melody, over which he injects various percussion sounds, all generated from the piano. The percussion is exotic, and Delbecq’s untreated solo piano darts around it, with occasional chords helping to center the piece. 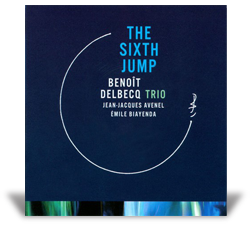 Delbecq’s compositions seem cerebral at first, but for all the air of experimentation that hangs over his work, there’s also a playfulness and joy. His sound is occasionally edgy and somber, but it’s ultimately hopeful, even childlike in its openness to possibilities. He uses some of the prepared piano techniques on the trio version of "Ando" from The Sixth Jump, but the bass and drums give the piece a looser, jazzier feel than on the solo version. Delbecq interprets "Le Sixième Saut" on both discs, bringing a wintry coolness to the solo version. The trio version is more abstract and strange, but Avenel and Biayenda help broaden the scope of the piece.

Circles and Calligrams and The Sixth Jump are companion pieces, recorded about a year apart and showcasing different facets of Delbecq’s talent. Both recordings are sonically rich because of the ways Delbecq manipulates the piano for various effects, but the trio recording is especially rich. Avenel and Biayenda give themselves over to the music to help create a disc of startling complexity and, at times, arresting beauty. Both discs contain music by an artist with a singular vision. 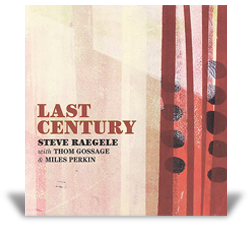 Guitarist Steve Raegele played with the indie Canadian psych band the Besnard Lakes, and he has recently played with drummer Thom Gossage’s Other Voices. Gossage and bassist Miles Perkin join Raegele on Last Century, the guitarist’s debut as a leader. Raegele is certainly open to rock’s influence, but it won’t do to pin him down to any one genre. Just when I think Captain Beefheart is a touchstone ("Sisyphus") or Ginger Baker’s trio with Bill Frisell ("Janet Jackson"), Raegele is off somewhere completely on his own. The tunes carefully balance improvisation and tight construction, with Gossage and Perkin engaged in intelligent discussion with the leader. Raegele combines the visceral drive of rock with the technique and improvisational daring of jazz.

Raegele jaggedly picks notes on "Stop Short," with Perkin’s acoustic bass rolling alongside him to keep the piece together and Gossage popping and kicking on the drums. Halfway through, the piece gels and what seemed random comes together into something complete and inevitable. Raegele occasionally plays with the possibilities of older electronic effects like reverb and tremolo, and he displays an affection for older sci-fi and horror film music ("Last Century" and "Daedalus"). Yet his music sounds utterly new and current, and the samples on "Bacchus" and "Fight Club the Rabbit" show an openness to new technology that I hope Raegele explores further.

On "Janet Jackson," Raegele opens with a series of open strummed chords that give way to a passage of fingerpicked arpeggios, evoking what he calls "faux-Debussy impressionism." A hard rock interlude builds to a crescendo that Raegele then carries off into a long section composed of single-note runs, heavily plucked chords and intervals, and elegant arpeggios before returning to the opening theme. Gossage and Perkin follow him closely at every step, helping build, develop, and open up the musical ideas Raegele gives them. Every moment of Last Century is filled with similar exciting moments of musical possibility and freshness that gain flight because the three musicians have the skills to bring off Raegele’s often astonishing pieces.

All four discs reviewed here meet Songlines’ high standard for recording quality. They were recorded in 24-bits/96kHz or 24-bits/48kHz, and all are notable for their clarity and the openness of their sound. Songlines Recordings has a remarkable commitment to challenging music that is sometimes difficult but always rewarding. If they did vinyl, they’d be my favorite label. As it is, I can’t think of another record company I like better.