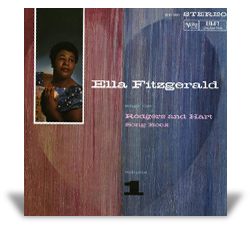 Ira Gershwin once said, “I never knew how good our songs were until I heard Ella Fitzgerald sing them.” Fitzgerald recorded a collection of Gershwin songs for Decca Records in 1950, but her manager, Norman Granz, felt that her other material for the label was beneath her. When he signed her to his own label, Verve Records, in 1956, he realized his dream of having her devote complete albums to songs from the Great American Songbook. Over the next eight years, she completed recordings of tunes by eight songwriters or songwriting teams who had made their reputations in Hollywood or in American musical theater. The second of those collections comprised 35 songs by Rodgers and Hart. The arranger was Buddy Bregman, who earlier that year had helped her interpret Cole Porter’s songs.

Fitzgerald’s songbook collections, which established her as the foremost interpreter of American song, have been released several times in different formats and configurations. I own The Rodgers and Hart Songbook in a mono two-LP collection released on Verve soon after MGM acquired the label, and on two CDs, which Polygram released separately in two volumes in 1985. Original Recordings Group’s new stereo release of the first volume (Ella Fitzgerald Sings the Rodgers and Hart Songbook, Volume 1, ORG 055) contains 12 tracks on two 45rpm, 180-gram records. The song sequencing on this new version matches that of the original 1957 stereo release, which is the same as the first 12 tracks on the 1985 Polygram CD.

The packaging, consistent with ORG’s quality-control standards, is heavy cardboard and slightly larger than standard LP sleeves, and it’s a package that accommodates 180-gram records more easily. The buff finish blends well with the muted tones of the cover art (the original cover was glossy), and the inner sleeves are anti-static. The gatefold reproduces the original liner notes. Bernie Grundman mastered the collection with his usual sensitive, highly musical ear.

I compared my original Verve LP with the new pressing, and the most obvious difference was that the ORG pressing was quieter. MGM’s Verve pressings were noisy coming right out of the shrink wrap, and I had bought this one used so there was a good bit of groove noise. The ORG was also just a tiny bit noisy, even after a brush cleaning, so I cleaned it and the Verve with Audio Intelligent’s Enzymatic and Super Cleaner fluids. Both records were then dramatically quieter, especially the ORG, which was silent on the lead-in groove.

I often enjoy hearing my favorite records in both mono and stereo, each of which has its own unique qualities in mixing and mastering. But I found that I much preferred this recording in stereo. The strings on “Have You Met Miss Jones” have more richness and texture, and Fitzgerald’s voice is much more sharply set off and three-dimensional in stereo. For that reason, and because it seems like a fairer comparison, I limited my side-by-side of Volume 1 to the CD and this LP. The CD version of “Have You Met Miss Jones” is much less engaging. The strings have a bit of an edge to them, whereas on the ORG pressing they sound more natural and it’s easier to detect the timbre of each instrument. The reverb applied to Fitzgerald’s voice is more defined on the vinyl, and it sounds like a natural reflection of sound from the walls of the studio rather than a recording engineer’s effect, which it is.

In the intro to “You Took Advantage of Me” Fitzgerald is accompanied by a piano before a small jazz combo joins her for a leisurely, swinging version of the song. The kick drum hits with a hard punch, but on the ORG it doesn’t overwhelm, whereas on the CD it seems too prominent in the mix. The piano is behind and in support of the singer, and on the ORG pressing it’s more convincingly integrated with the rest of the band. On the CD it’s a bit too forward. Pete Candoli’s trumpet and Barney Kessel’s guitar are also more realistically placed in the soundstage on this reissue, and they complement Fitzgerald’s voice.

Bregman arranged “This Can’t Be Love” for the full orchestra, and here Grundman’s mastering really shines. The horn and reed sections are much easier to identify on this pressing than on the CD. The instrumental break flows effortlessly, while on disc it seems too pushy, with the horns blaring. On the LP the space around Ms. Fitzgerald’s voice is uncluttered, and she’s out in the room, away from the band. On CD the brass on “The Lady Is a Tramp” seems intrusive. By contrast, on this LP it sounds forceful but never overbearing. Fitzgerald sounds relaxed and natural with the band, while on the CD she fights for room in the soundstage.

What’s consistently remarkable and enjoyable about this pressing of Ella Fitzgerald Sings the Rodgers and Hart Songbook, Volume 1 is its sheer musicality. You can hear how effortless Ms. Fitzgerald sounds as she plays with a note or glides easily into a key change. She’s more intimately in the room with the listener in comparison with both the CD and the mono LP. I’ve enjoyed the CD in the many years I’ve owned it, and it was mastered well enough. But this ORG pressing sounds definitive to me, and when I can carefully listen to and enjoy this recording, it will be the version I choose. I hope fervently that ORG soon presses the second volume. 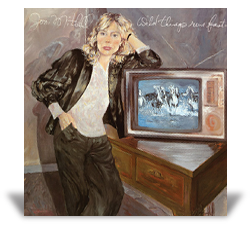 Joni Mitchell went through a period in the late 1970s when she was influenced by jazz, but even her vocals in pop recordings have always had the fluidity and rhythmic playfulness of jazz. Her first album to be released in the ’80s, Wild Things Run Fast (1982), marked a move to a new label, Geffen Records, and a return to pop songwriting. As is often the case with Mitchell, the record was still a change in direction. She had been hearing and enjoying music by Steely Dan, the Police, and other pop groups noted for their rhythmic and harmonic sophistication, and Wild Things Run Fast shows the influence of those two bands.

John Golden mastered the original LP, and I’ve always liked the way it sounds. I still do, but Bernie Grundman’s remastering on Original Recordings Group’s reissue of the LP (Wild Things Run Fast, ORG 056), pressed on two 45rpm, 180-gram records, is deeper and more spacious, with small details like the sustain on guitar notes and the resonance of the drums brought out in sharper relief. Transients are also more dramatic -- when guitarist Steve Lukather and the rest of the band stop suddenly on the opening of the title track, the silence carries a jolt that’s lacking on the original pressing. Larry Klein’s bass lines have more weight and authority on this LP, and as with the Fitzgerald pressing, you can hear Mitchell’s annunciation and intonation better.

Catching the details that were somewhat muted in the original pressing is one of the pleasures of this LP. John Guerin’s brush strokes on the snare on “Be Cool” are much more focused and resonate longer, and the whispers of “fire and ice” throughout the song are more precisely placed in the soundstage. The harmonic structure of the background vocals throughout the record is easier to hear, and Wayne Shorter’s soprano sax has such presence that you can clearly visualize the bell of his horn. Wild Things Run Fast is no masterpiece, but it’s a fascinating, likable, and well-played entry in Joni Mitchell’s discography. This Original Recordings Group pressing gives us a very clear presentation of its merits.